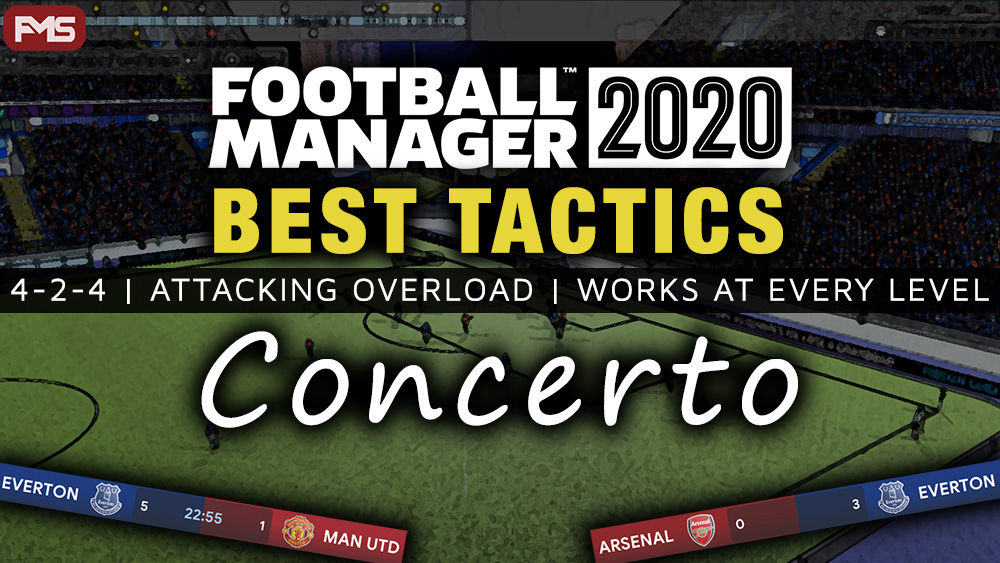 After months of talking about the communities work its finally time to share my own best FM2020 tactic. ‘Concerto’ is an attacking, pressing system built around movement and wide overloads in the shape of a 4-2-4.

This FM20 lower league tactic worked a treat with Scarborough Athletic in League Two and Everton in the Premier League. I have recorded a Youtube video explaining how to use ‘Concerto’ from player roles, to tweaks and player suitability plus some gameplay and test results. You can download this Football Manager 2020 tactic from the bottom of this post. Why not subscribe to our Youtube channel for more content?

For an attacking formation this is surprisingly stable owing to balance in both roles and duties. The advanced forward stretches the pitch while a false nine drops deep, creating space for the inverted winger. An advanced playmaker is the heartbeat of midfield supported by a box to box midfielder.

The left full back supports while the right wing back attacks creating balance in transition. This is an attacking, pressing system utilising overlaps and a fairly high defensive line. The video above goes into great detail so I suggest giving it a watch. 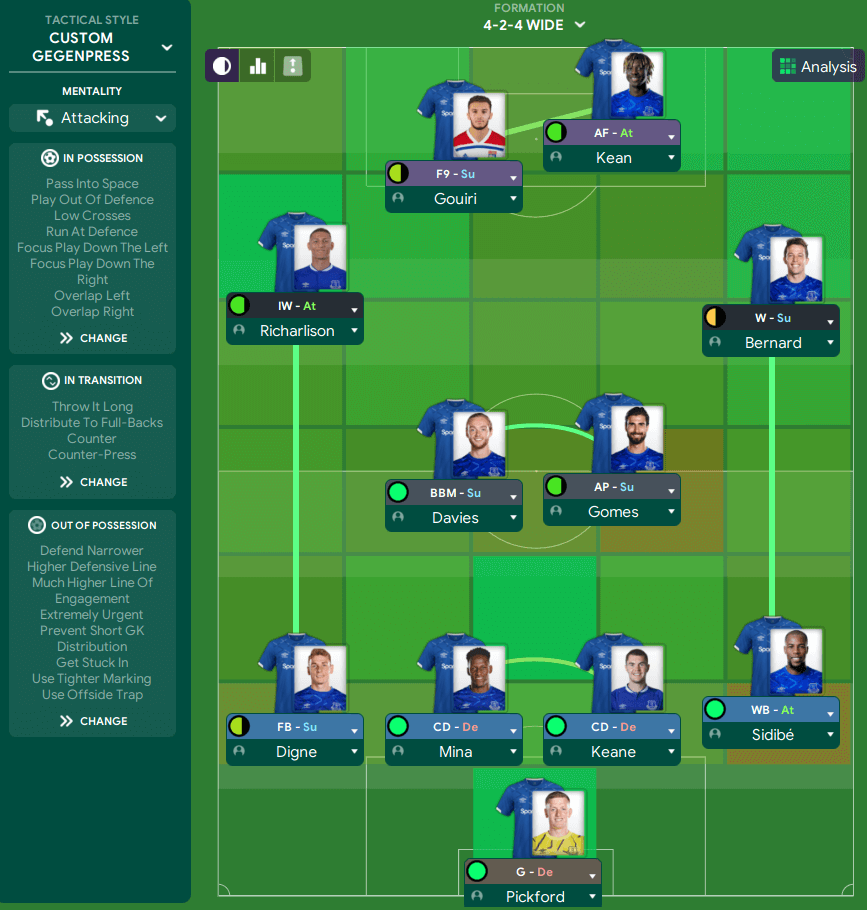 I have listed each role below followed by a description of the ideal player because suitability is vital to success. There are two versions of ‘Concerto’ dependant on which side suits your inverted winger. If AMR and AML switch the central midfielders, strikers and full backs switch also. You can download both versions further down.

DC’s – central defender (defend) – I look for a towering presence, someone who is not a calamity on the ball (they will give away possession) and speed can be helpful.

DR – wing back (attack) – Fast, forward thinking wing backs will do very well in this system as they look to overlap. Speed, stamina and all round technicals are preferable.

DL – full back (support) – Same as above, the full back needs good technicals and speed, Digne is a fantastic example.

MCR – advanced playmaker (support) – The maestro, your advanced playmaker will pick out passes, work the ball forward and shoot from range. Physicals are not a priority but excellent passing, vision, movement, decisions, touch and the usual green AP attributes are important. Good long shot ability will add a tonne of goals, Andre Gomes works well in this role.

MCL – box to box midfielder (support) – The engine room of midfield your B2B needs good physicals, speed and an all round game. A jack of all trades and master of none he does require good passing and vision. Again, long shots will help.

AMR – winger (support) – Often overlapped by your wing back the winger must cross, possess great speed, dribbling ability and all round technicals will help. In the final third he can form a front four with the strikers and AML.

STR – advanced forward (attack) – The main goal threat good finishing is a must but speed is even more important. If you can find an all round striker with good aerial ability, great, but don’t let this sacrifice speed and finishing. Dribbling, technique, off ball movement and composure are important also.

STL – false nine (support) – The false nine will drop deep to link up play and requires good technique, passing and vision. He will look to dribble from deep also, so speed, dribbling and flair will help. Gouiri did well as an all round, athletic player for Everton. Do not expect loads of goals, this is very much a ‘team’ role.

You should not tweak ‘Concerto’ on a game by game basis, only mid-match as suggested below.

We beat Man City 5-3, Liverpool 3-0, Man Utd 5-1, Chelsea 3-0 and Arsenal away 3-0 proving ‘Concerto’ is a big game tactic. The advanced forward scores for fun while my false nine played more of a ‘team’ role. The inverted winger can be lethal and both DR and DL should be high on the assists. 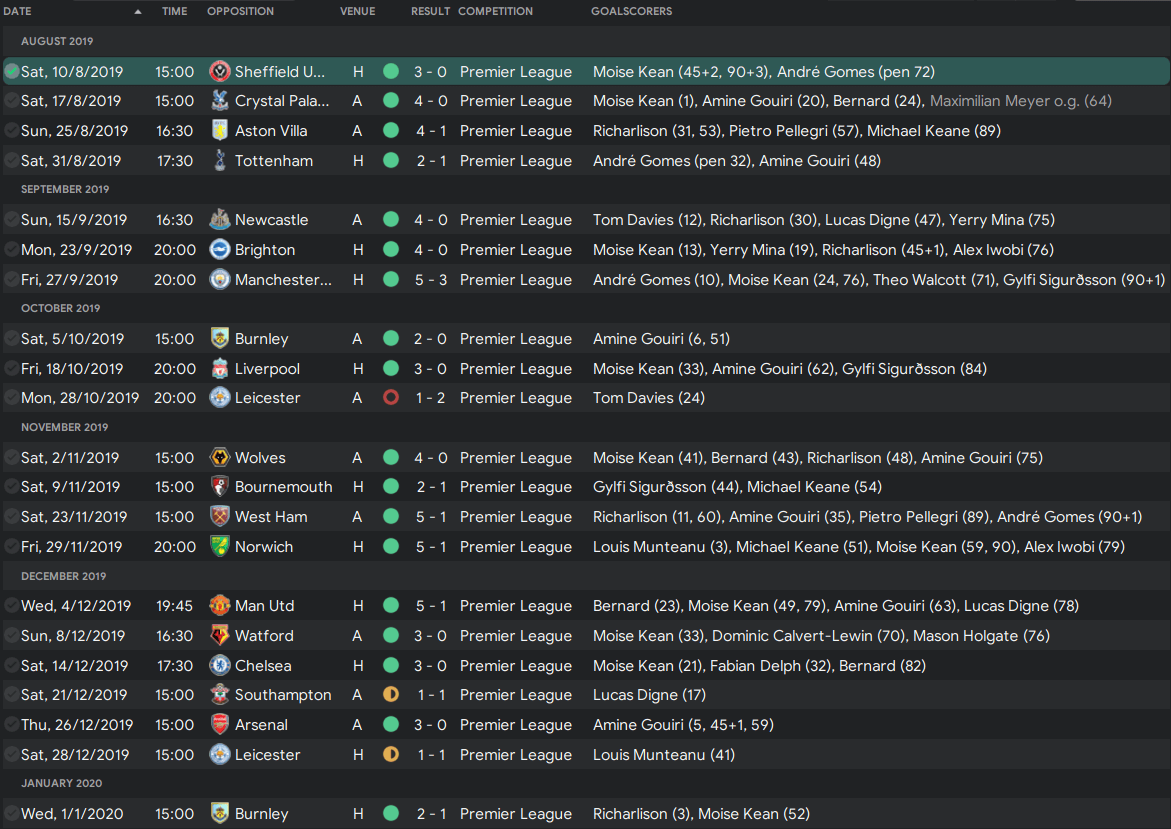 Top of the table by 11 points in January, though Liverpool do have two games in hand.

Onto the lower league test and an unbeaten run with Scarborough Athletic. After three consecutive promotions this is the Seadogs first season in League Two. I did load ‘Concerto’ a few months into the season but the results speak for themselves.

Thanks for reading, any social shares would be much appreciated. Follow us on social media for future posts in the series.

Could use two F9 and two Inverted wings in the same tactic?

That would be a terrible idea, think logically and you’ll realise they will just get in each others way, theres no balance in that.

I have tried it as i said didnt work, but i had goals from long shots from my midfielders.
Thanks for answering

best tactic so far, hahaha, 125-128 goals and 27 conceded for ManU for two years straight! but, i feel sorry for the RD and LD, it seems they keep has a low rating…. also rashford as LW in this tactic doesn’t seem effective

It does take a specific type of player for the left side and if you are trying him as a Winger on support that will go completely against Rashford’s strengths cutting inside and attacking the defence. Glad its working for you otherwise.

what about individual training ?

Just to suit the player and what he needs to develop. Anyone saying you should train a player for the tactic (other than positional familiarity, note training in the role makes no difference to how they perform within the role) does not understand how training works.

“if against two DMC’s try my ‘FM20 Atalanta tactic’.” when you say that are you speaking about 4231 or literally 2 dmc stick to the defense ?

Don’t understand the questions there but to clarify that point whenever the opposition use two Defensive Midfielders (ie the position) Concerto will struggle. I have made a different tactic for this scenario now called The 3 Amigo’s I’d probably suggest trying this in that scenario https://footballmanagerstory.com/best-football-manager-2020-tactics-the-3-amigos-big-game-system/

so if i understand good , you suggest to play the 3 amigos tactic against 4231 or 442 tactic for example ?

No thats not what I said. Use the 3 Amigo’s whenever the opposition play with two DMC’s, I can’t explain it any clearer than that. Now a 4-2-3-1 or 4-4-2 traditionally use CM’s, but if you are referring to the version where they drop the two CM’s to DMC then yes it would apply to that.

Most of my shoots and crossings are blocked, can i fix this some way ?

Most likely comes down to lack of suitability with your squad for the system.

The best tactic of all time. Currently 50 game without lose with Chelsea. I get them after first season and make lot of transfer but still this tactic is incredable.
38 game played – W33-D4-L1. Goals for 117 – Goals agains – 21

Any teams that this tac work best with ? I used it with my Man Unt i got 100+ points and 2 top scorers, but with my borussia it dont work good

Comes down to player suitability though to be honest I’d expect it work with Dortmund’s squad. You also have to take opposition formation and tactics into account.

One of the best tactics i’ve ever used in any FM. Super fun! I only have a few problems in away matches, not every time, but mostly against strong teams and occasionally against very weak too. I can’t really control the match, i score but concede too, it’s a coin flip really, even when i know i have the better team. Playing as Juventus, i won against Real Madrid 5-0 home, but lost 3-1 away. I had similar results during all Champions league (which i won thanks to the many goals scored home). Is there any tweak i can make for away matches? Or an alternative tactic like against teams with 2 DMCs?

Not really, its just part and parcel of the system, unless you can see patterns of formations or certain systems it is happening against you would be guessing when to change without logic which never works long term.

After 24 games I’d lost 2 and was storming into the Champions League with Bournemouth but now, after 28 games I’ve lost 5 and my only win in the last 4 was against bottom of the league. My starting 11 only changes minimally for injuries or suspensions. Any ideas on why it’s gone so wrong?

The last part of your comment is the problem if you keep the same system and same team week in week out its easy for the AI to counter you need to switch things up. I have two squads, one for easier games and a main squad and I rotate.

Thanks. I have other tactics and have changed when injuries or suspensions have called for it but keep coming back to this tactic as it was so successful. I’ll try mixing things up a bit now and see if I can keep my Champions League dreams alive!