Gateshead to Glory Season 7 – Second Year in the EPL

Hi, welcome to a new episode of my Football Manager story managing Gateshead from Vanarama National North to Glory.

After five back to back promotions from the Vanarama National North League, and one in the Premier League in which we avoid relegation, it was time to try to challenge for an European spot.

Season 1:  We won the FA Trophy and the Vanarama League North without loosing any games, with 112 points in 42 matches.

Season 2: We lifted the FA Trophy Cup and the Vanarama National League without loosing any games with 122 points in 46 matches.

Season 4:  We Won the Sky Bet League 1 and the Papa John’s trophy.

Season 6: I avoided relegation in the first season in the Premier League.

The media and the odds expected us to finish in last position. 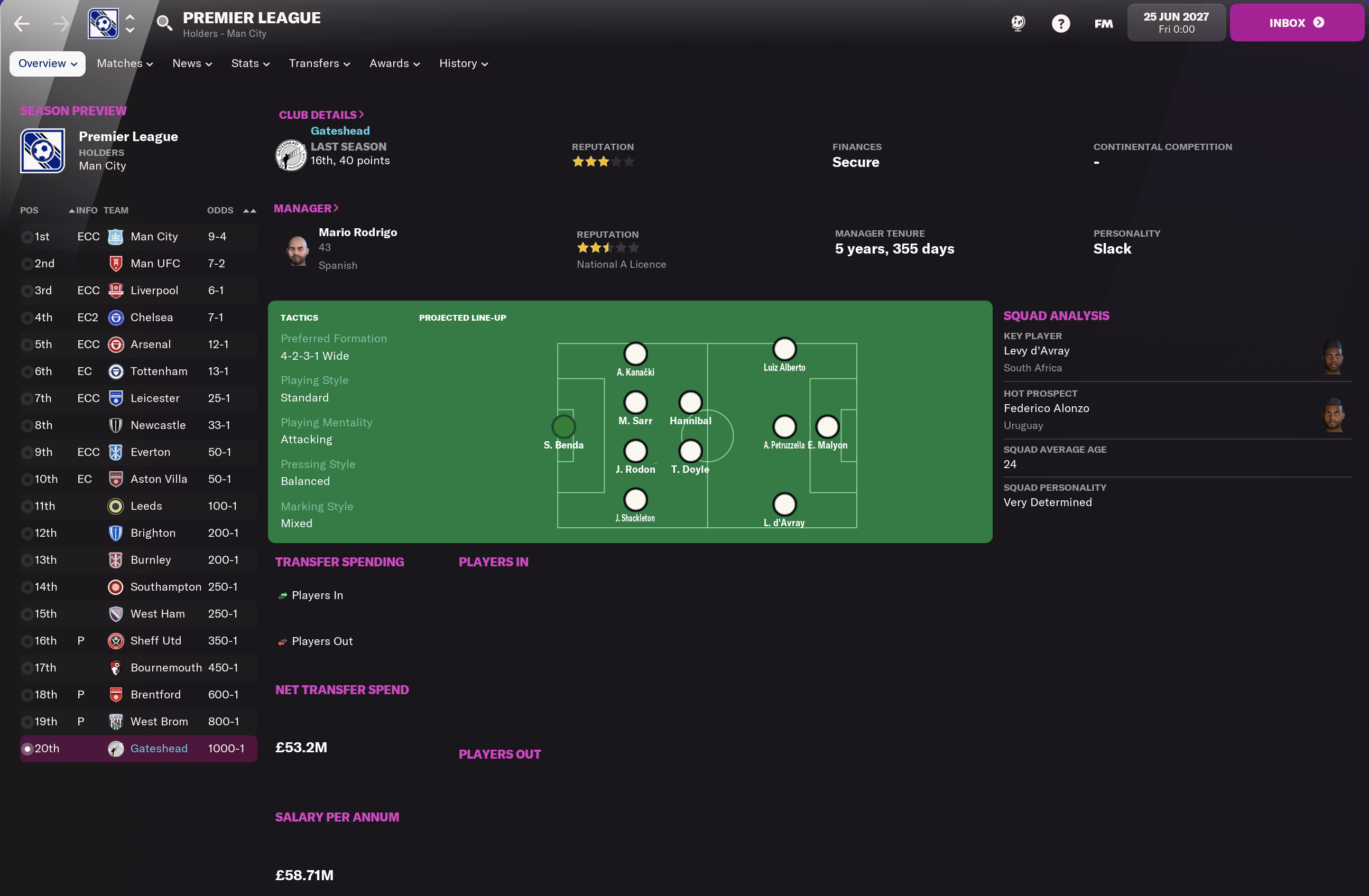 We won all seven matches. A very promising start. 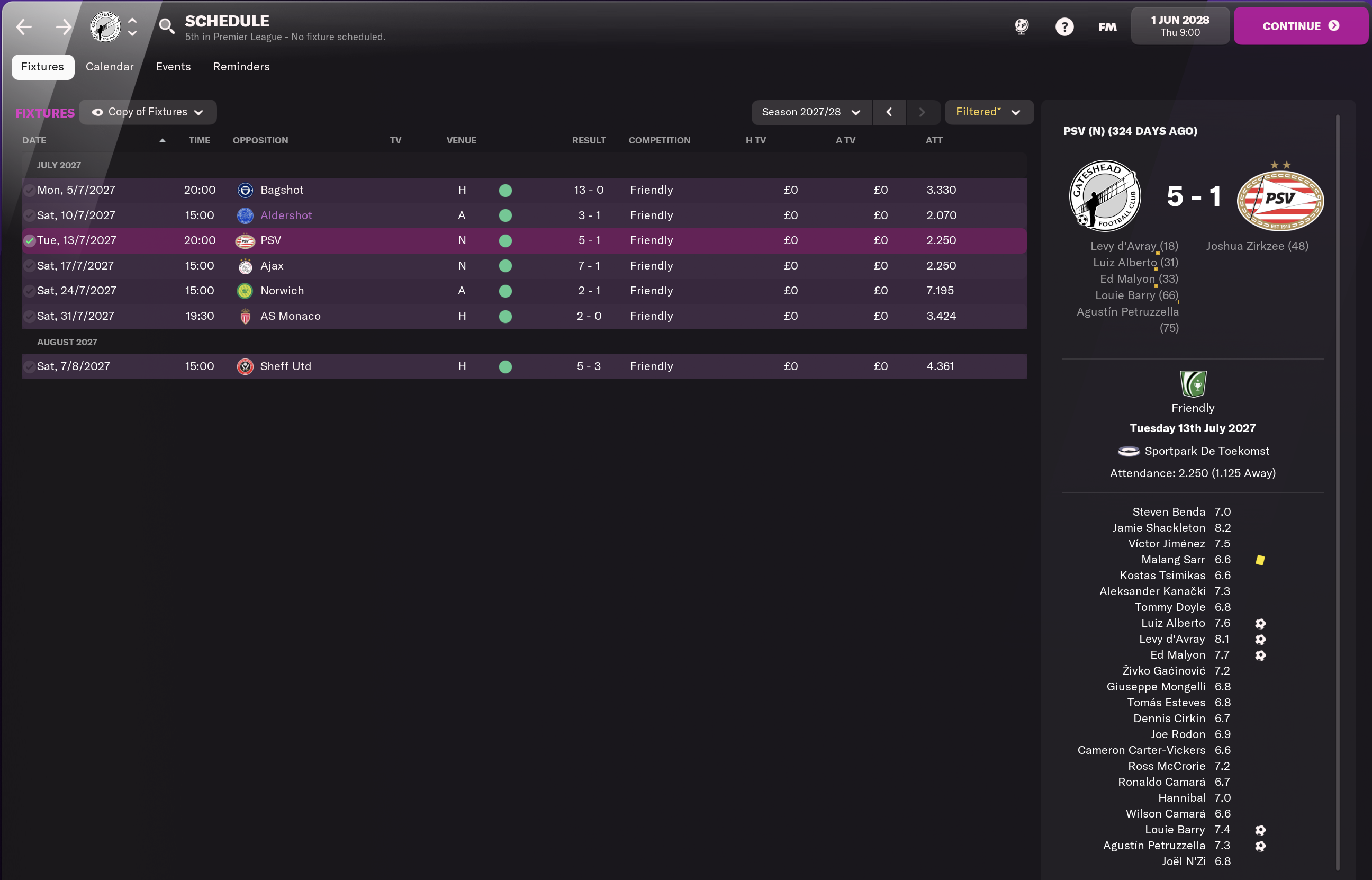 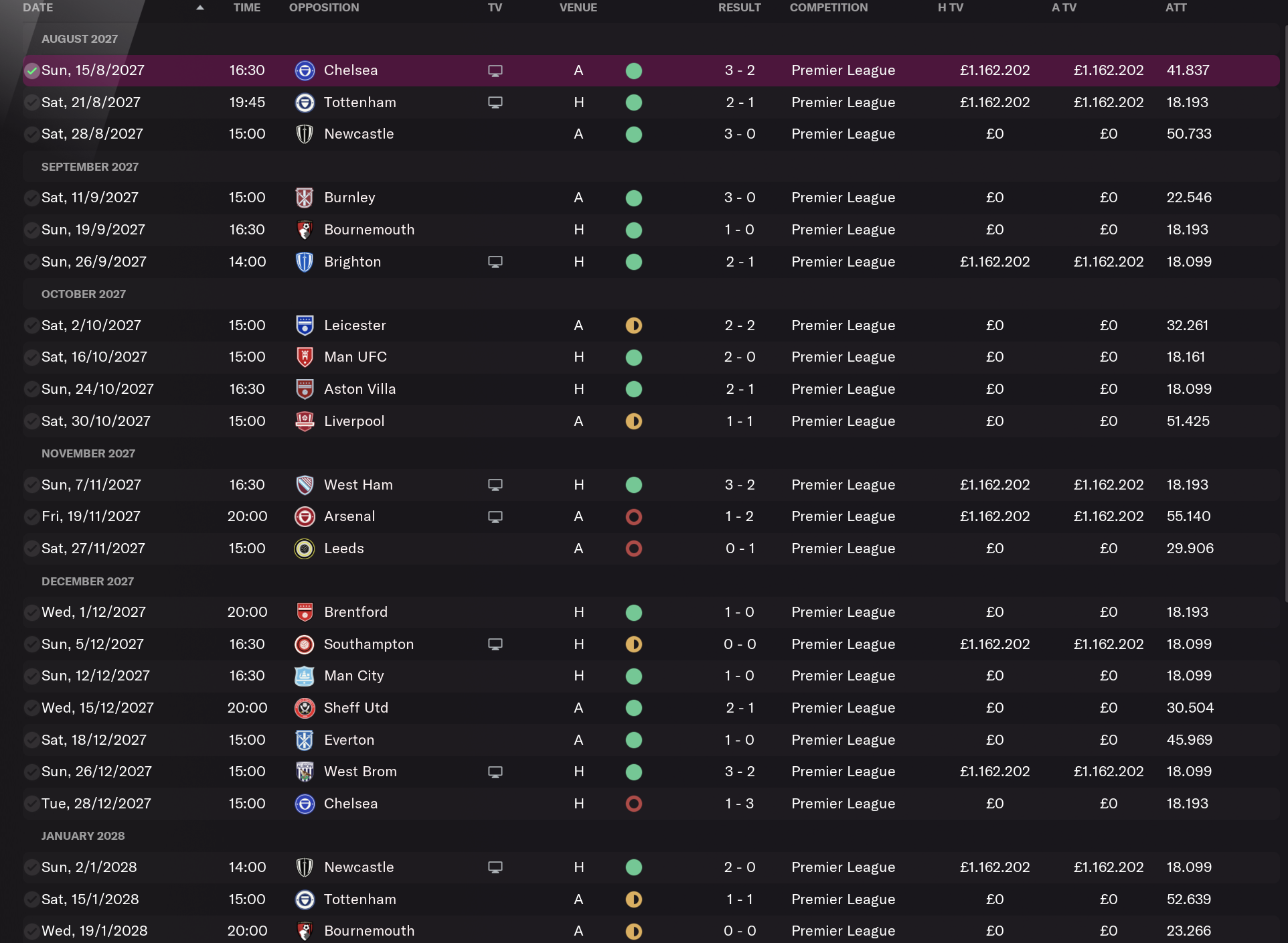 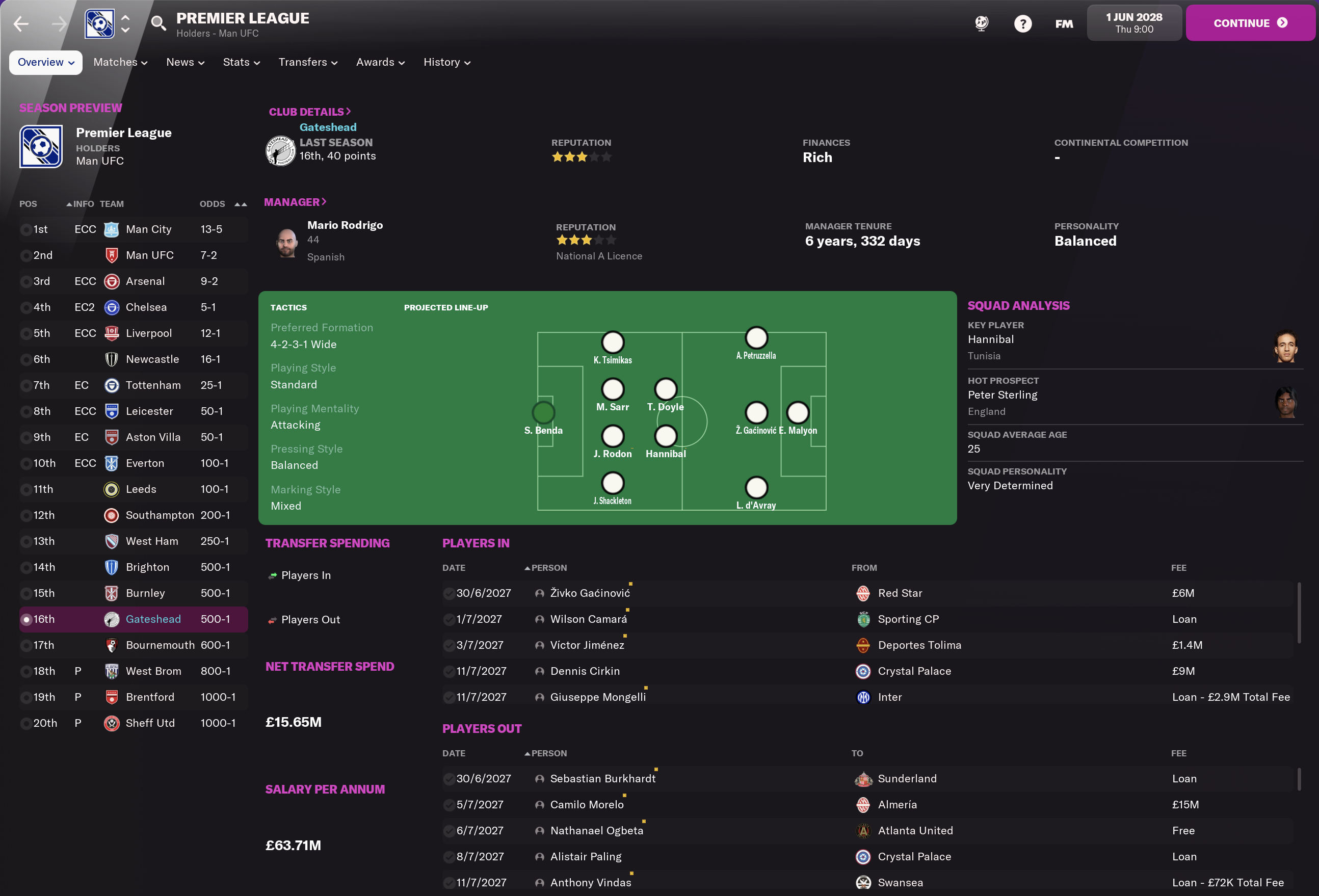 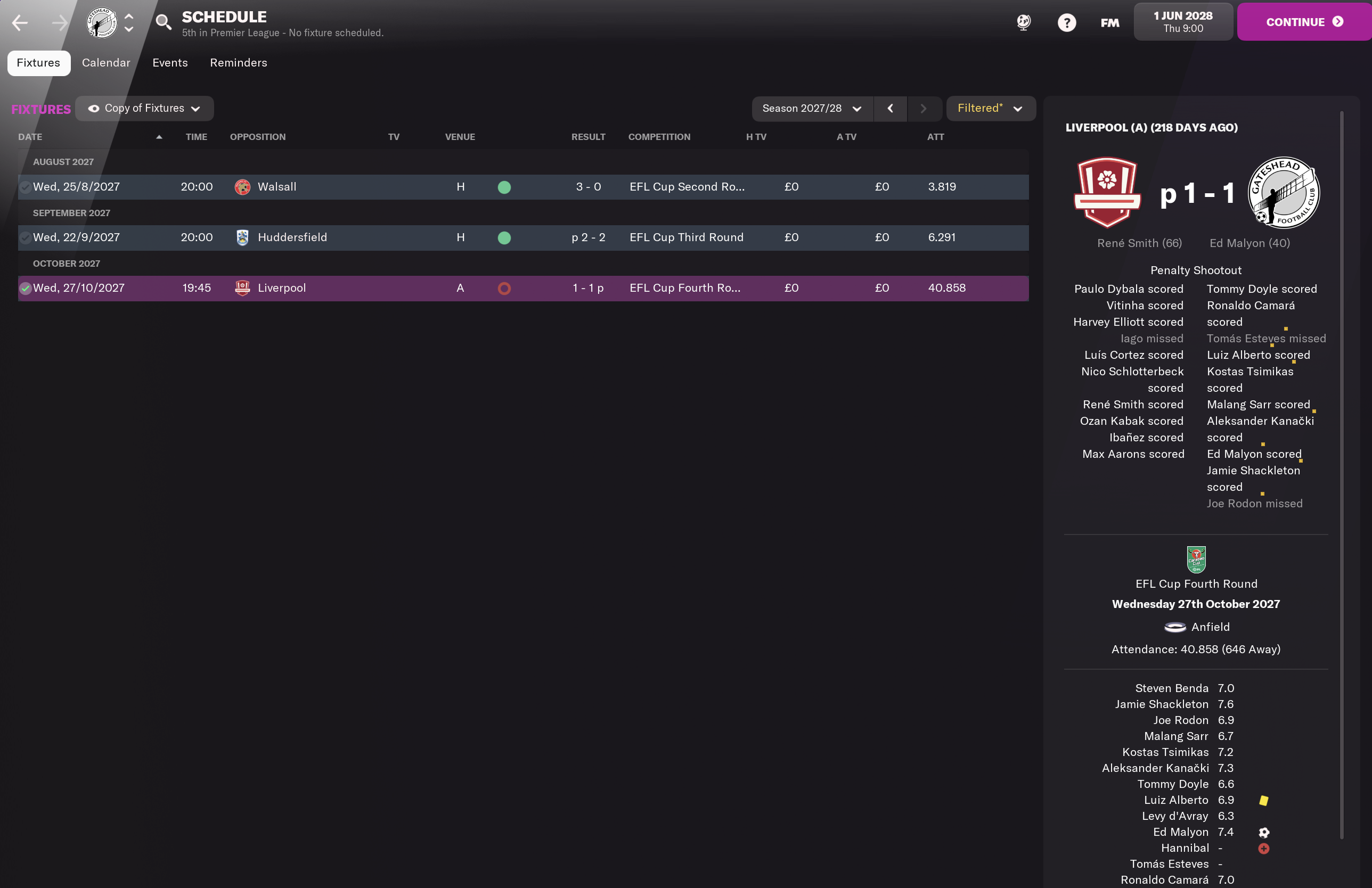 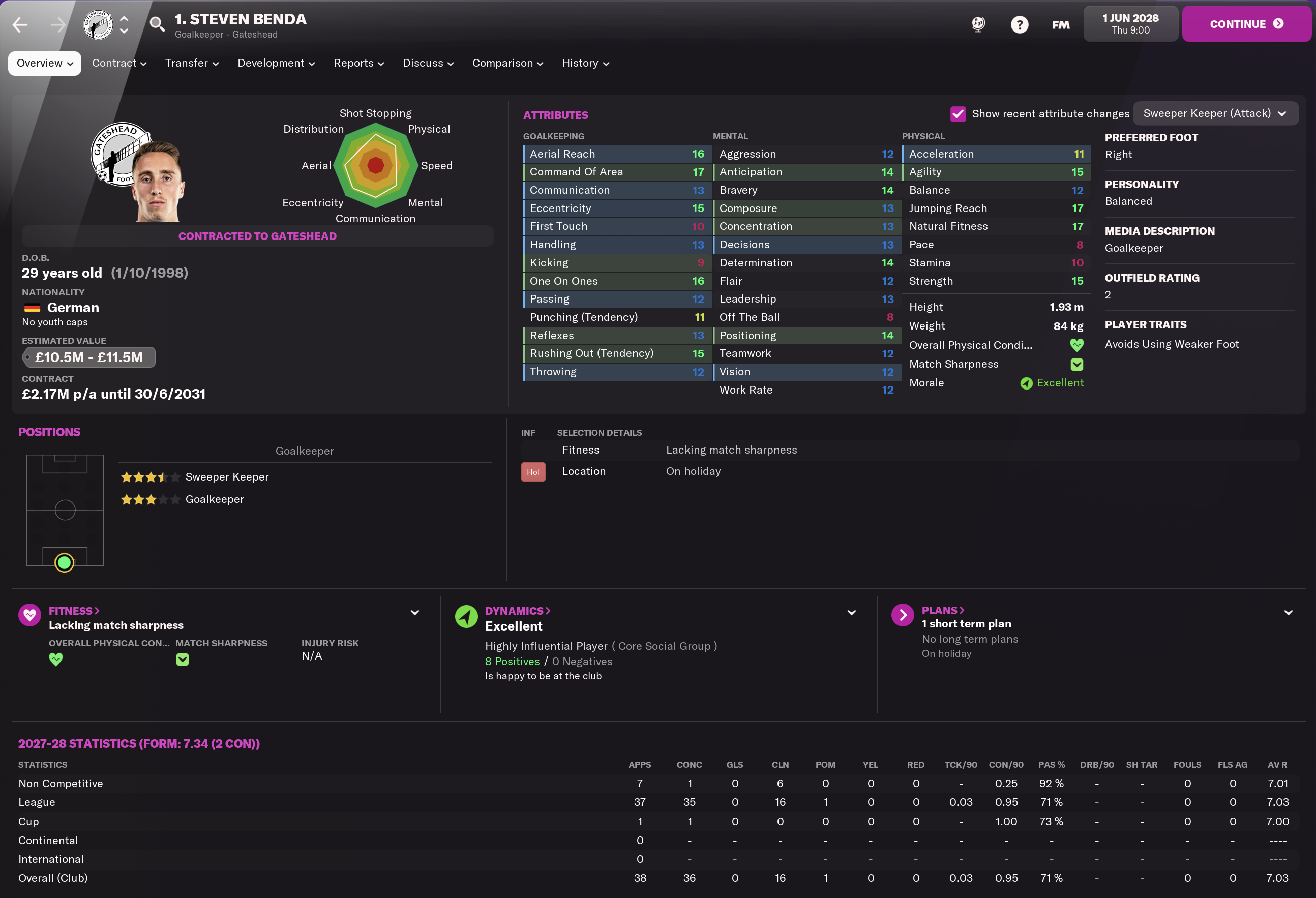 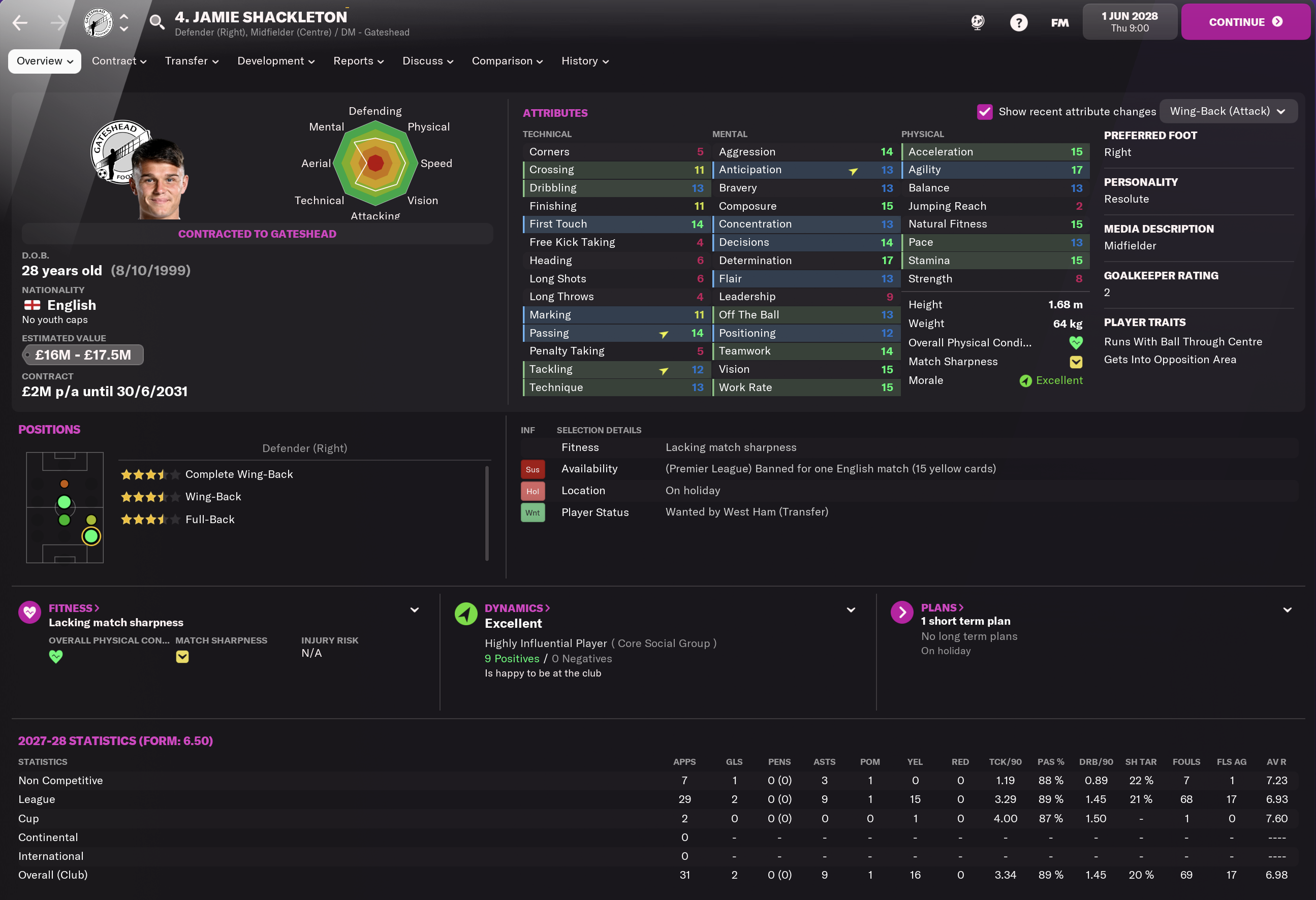 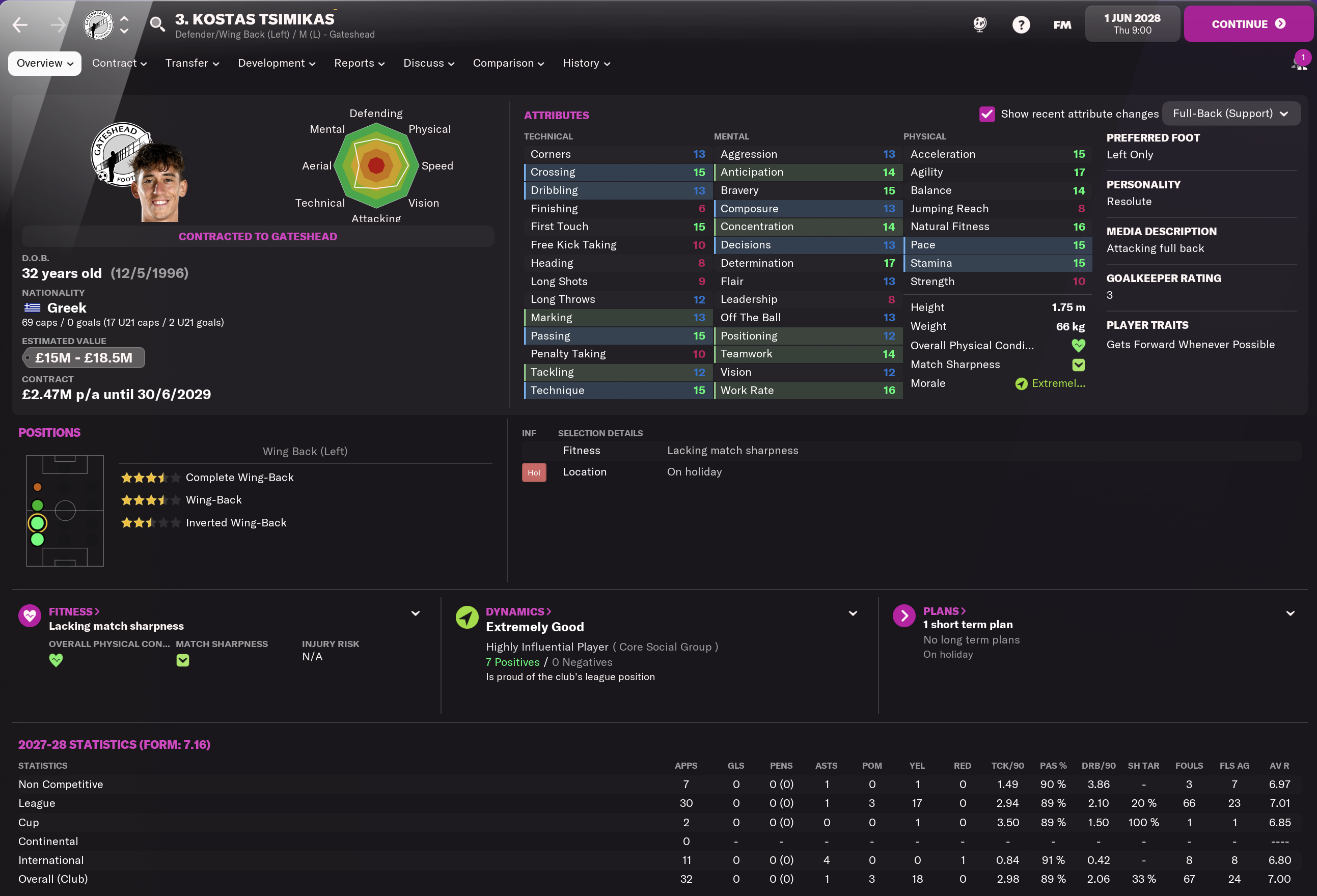 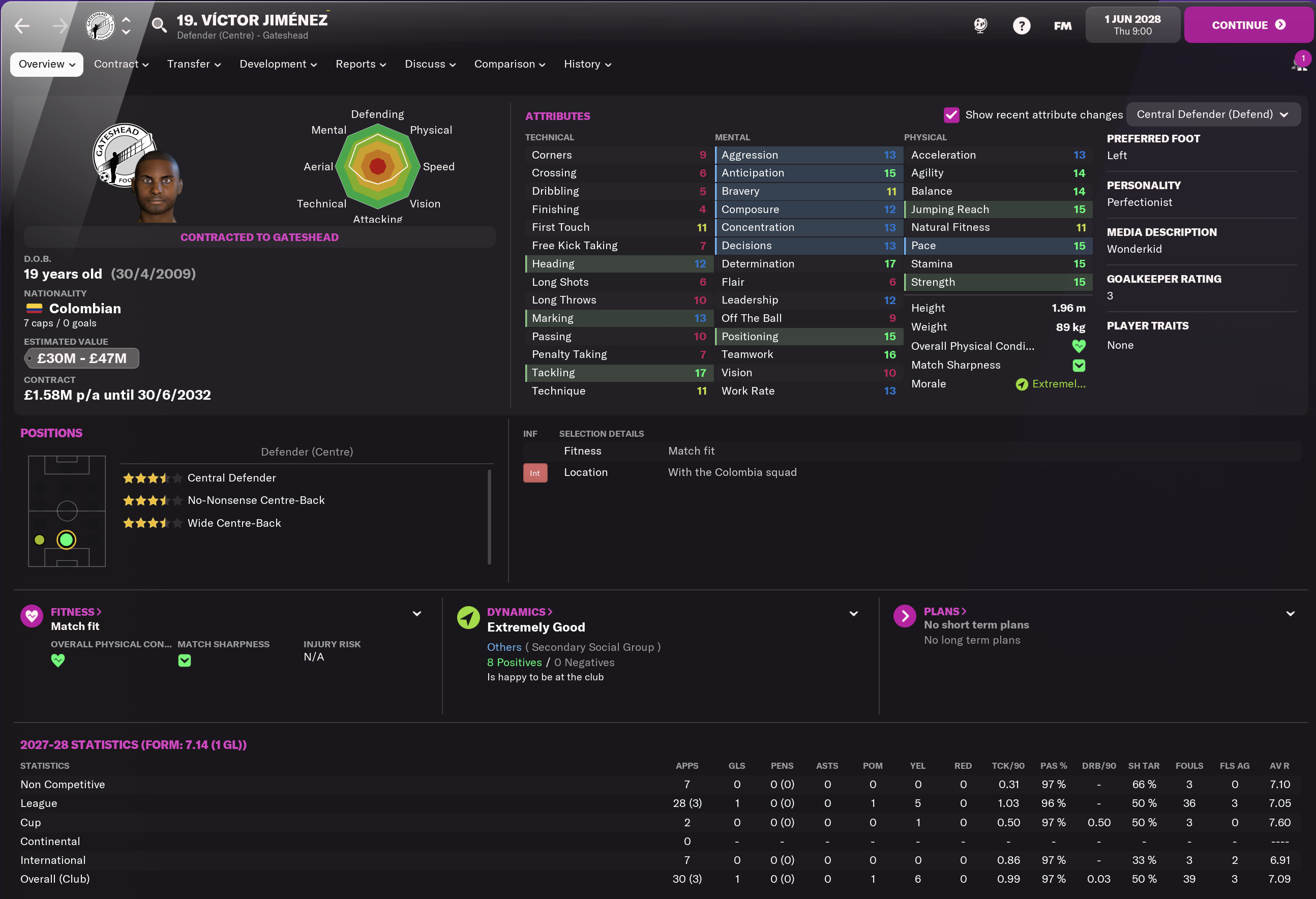 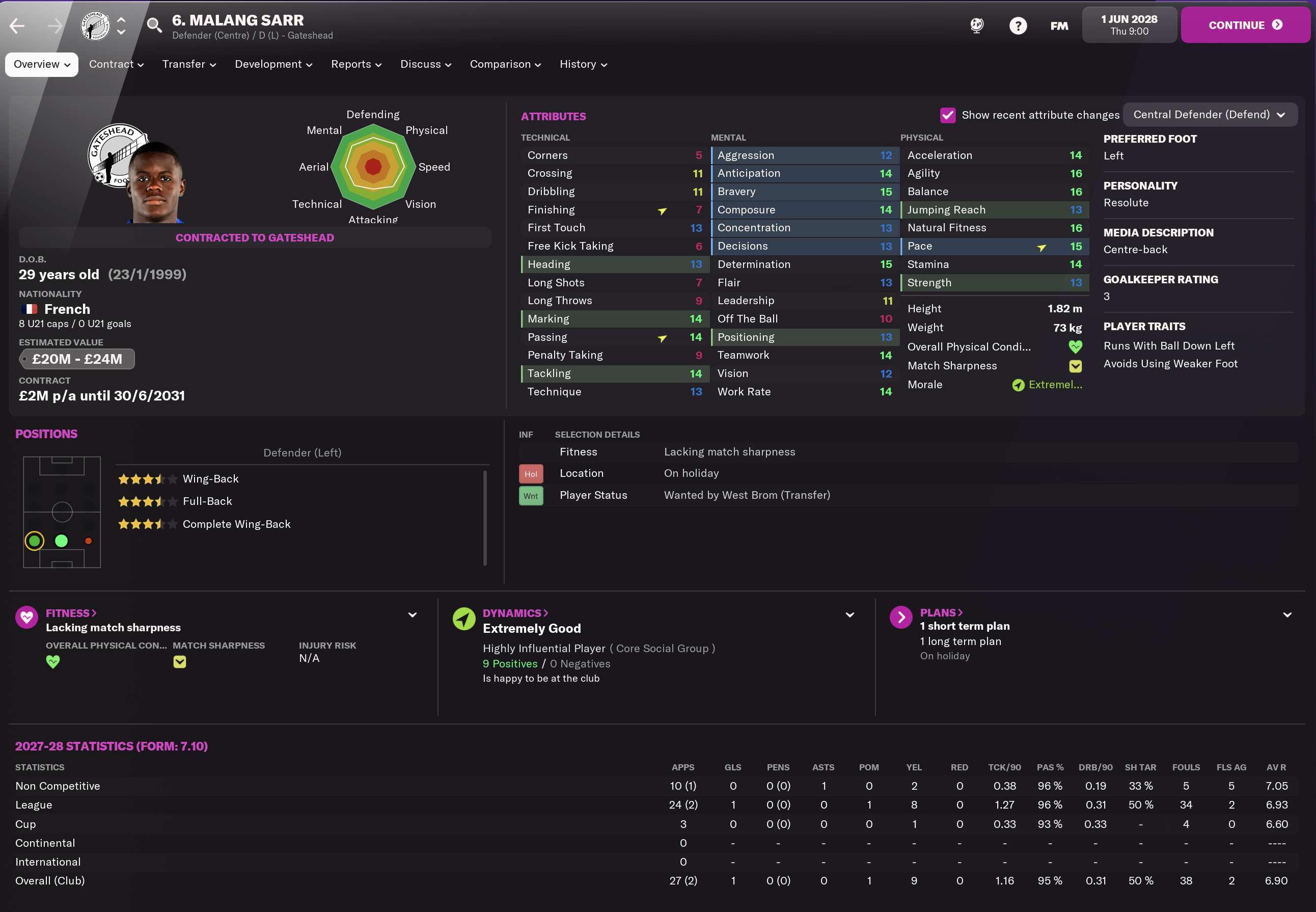 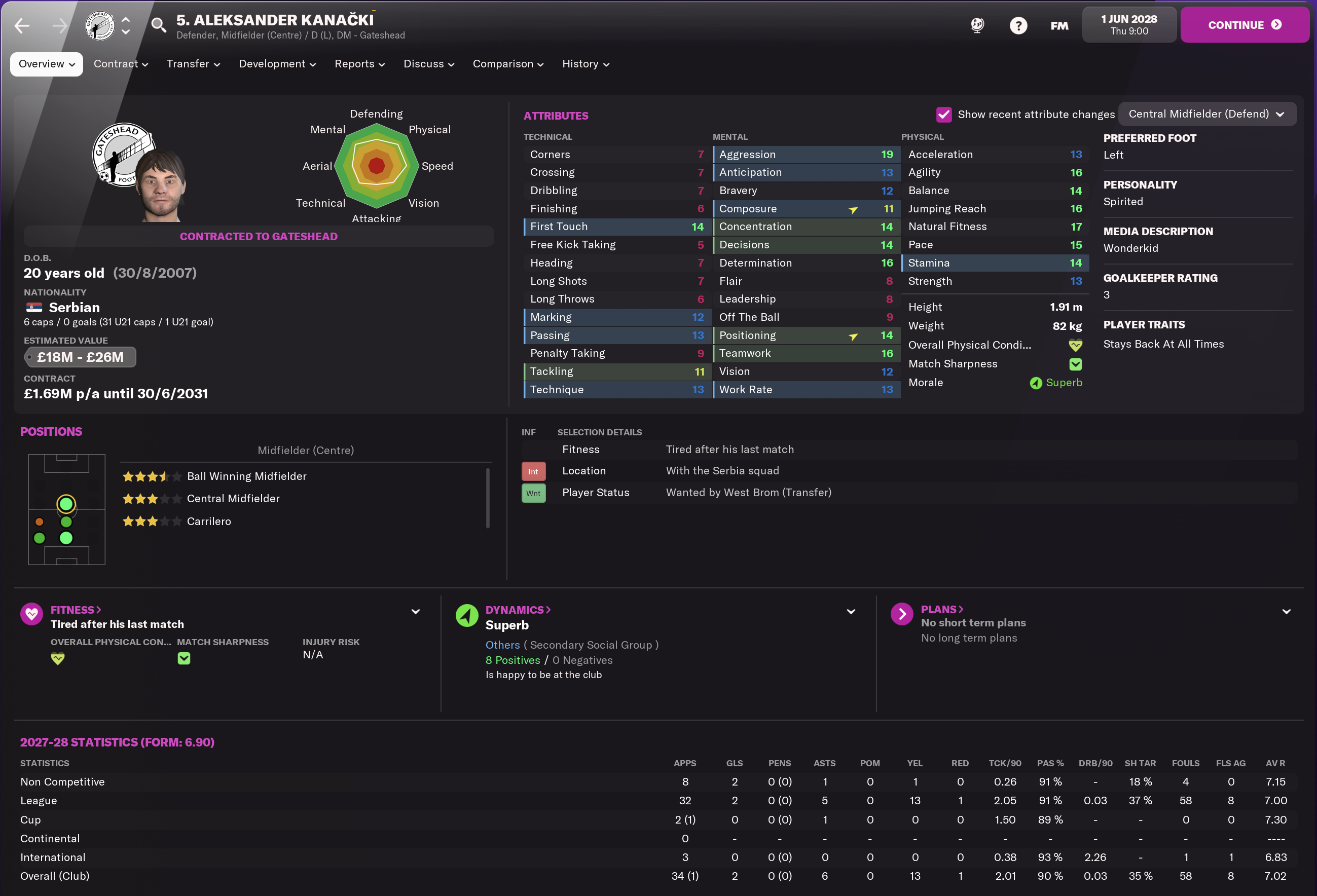 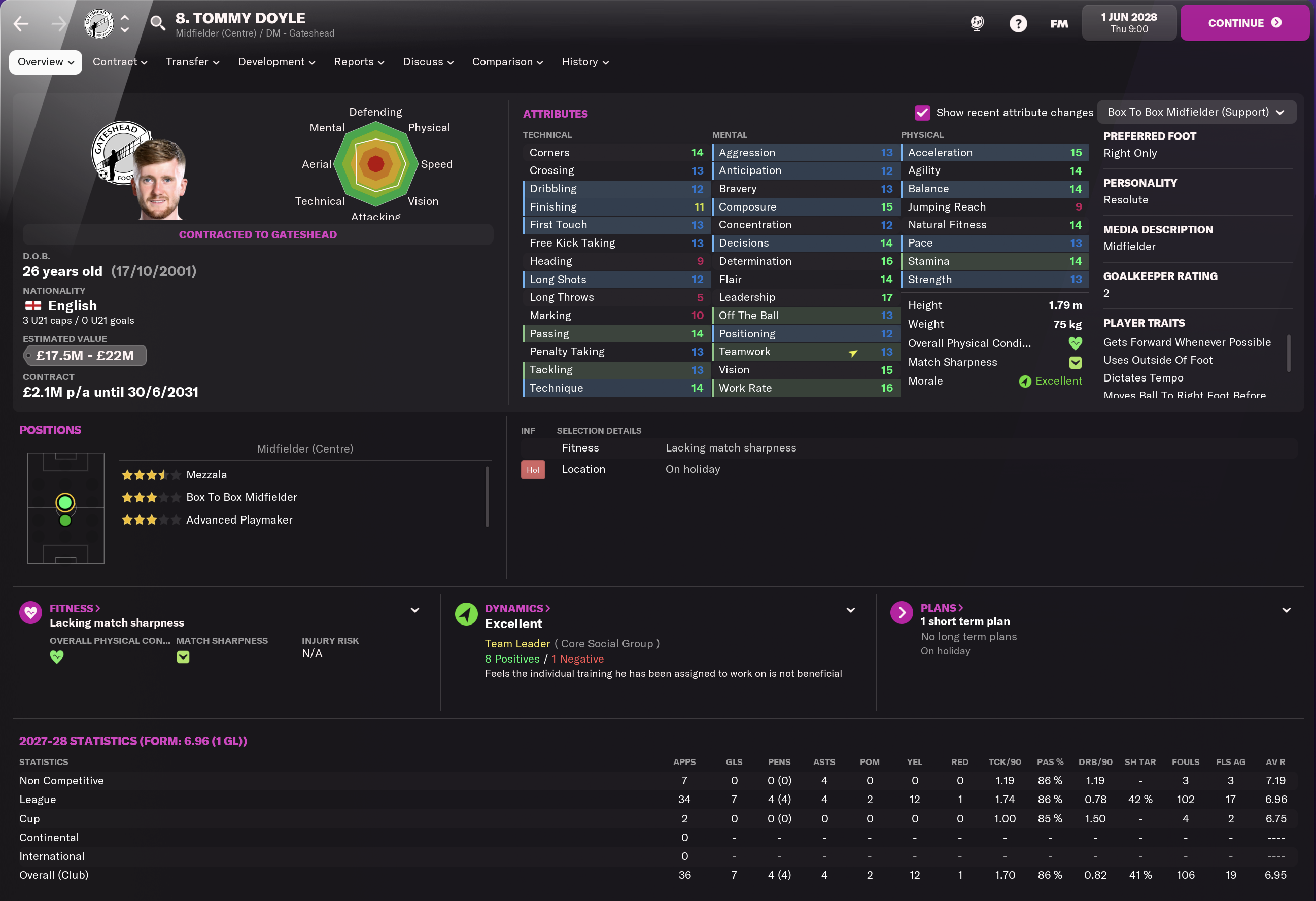 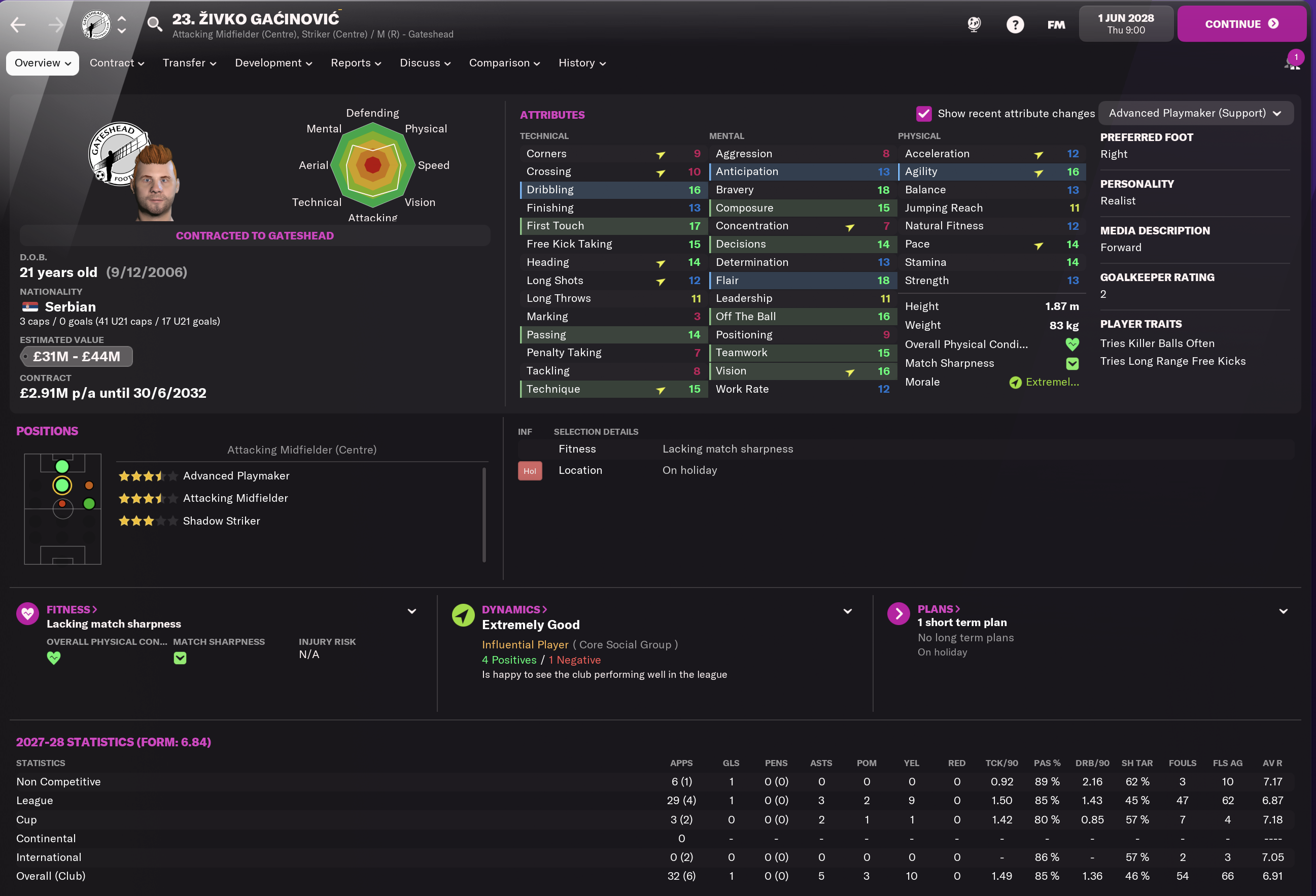 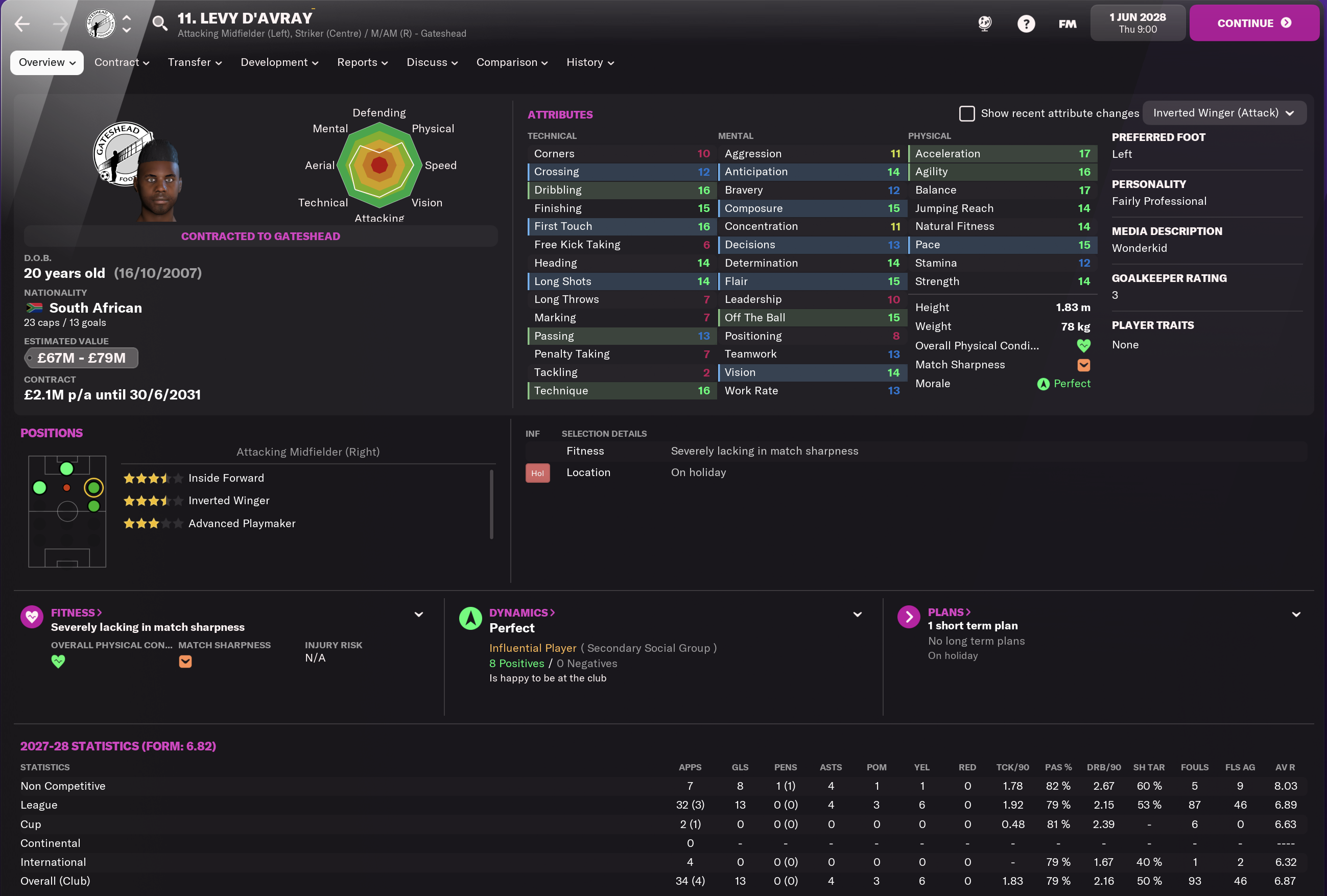 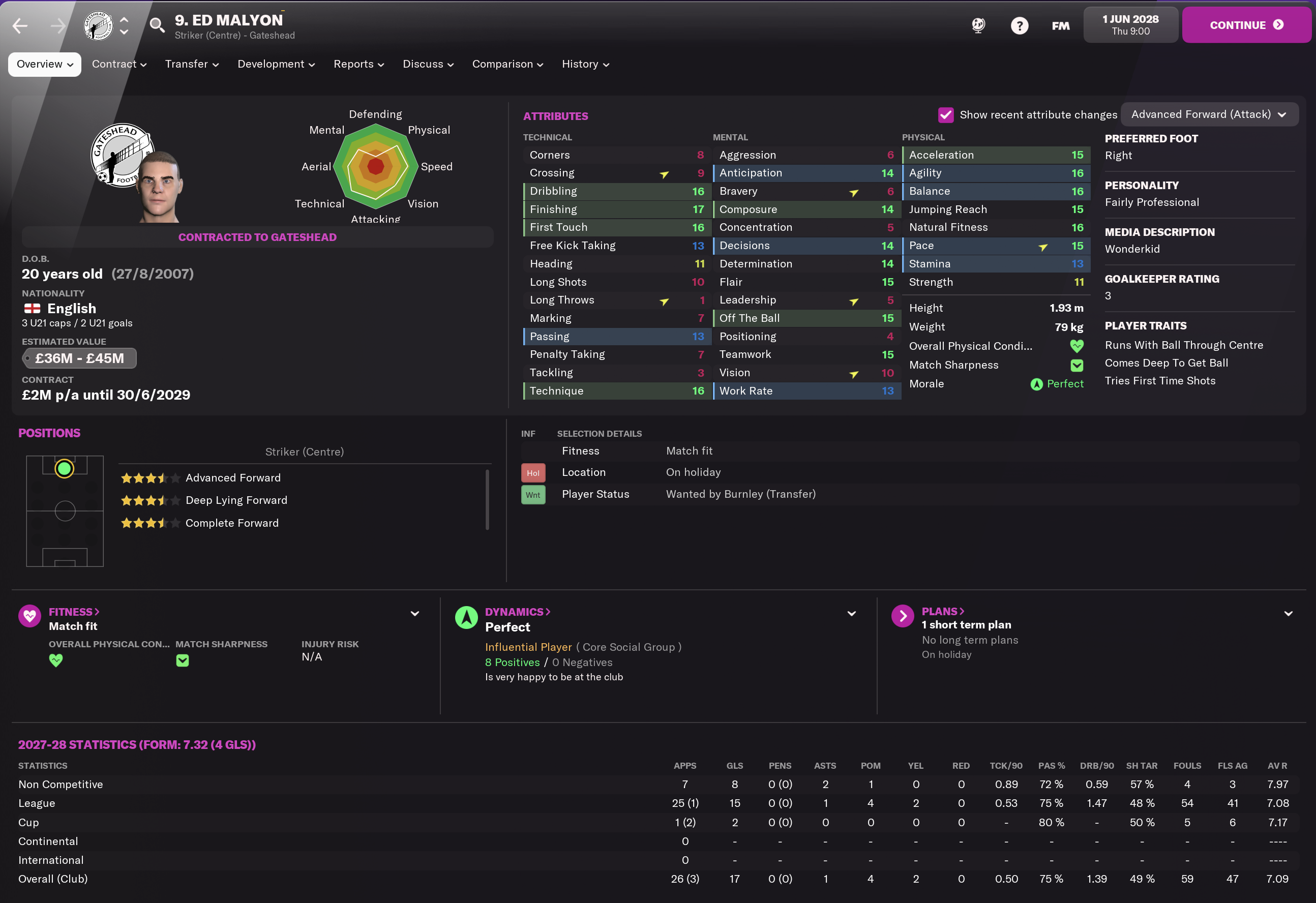 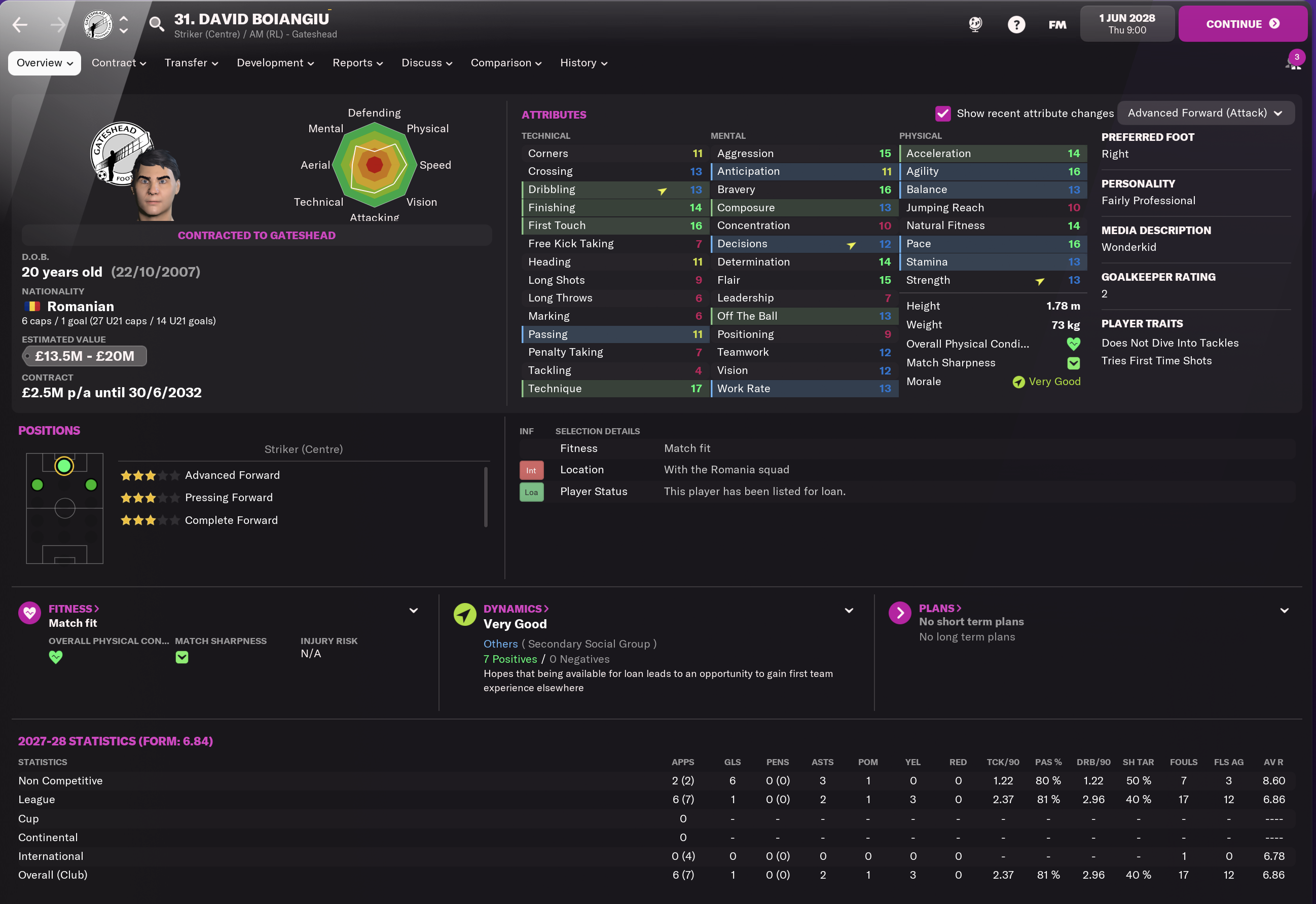 I managed to sell three more regen players for huge profits. I signed them for pennies with my “lower league money method”. You can read it here. 😀

Camilo Morelo for 15M to Almeria. 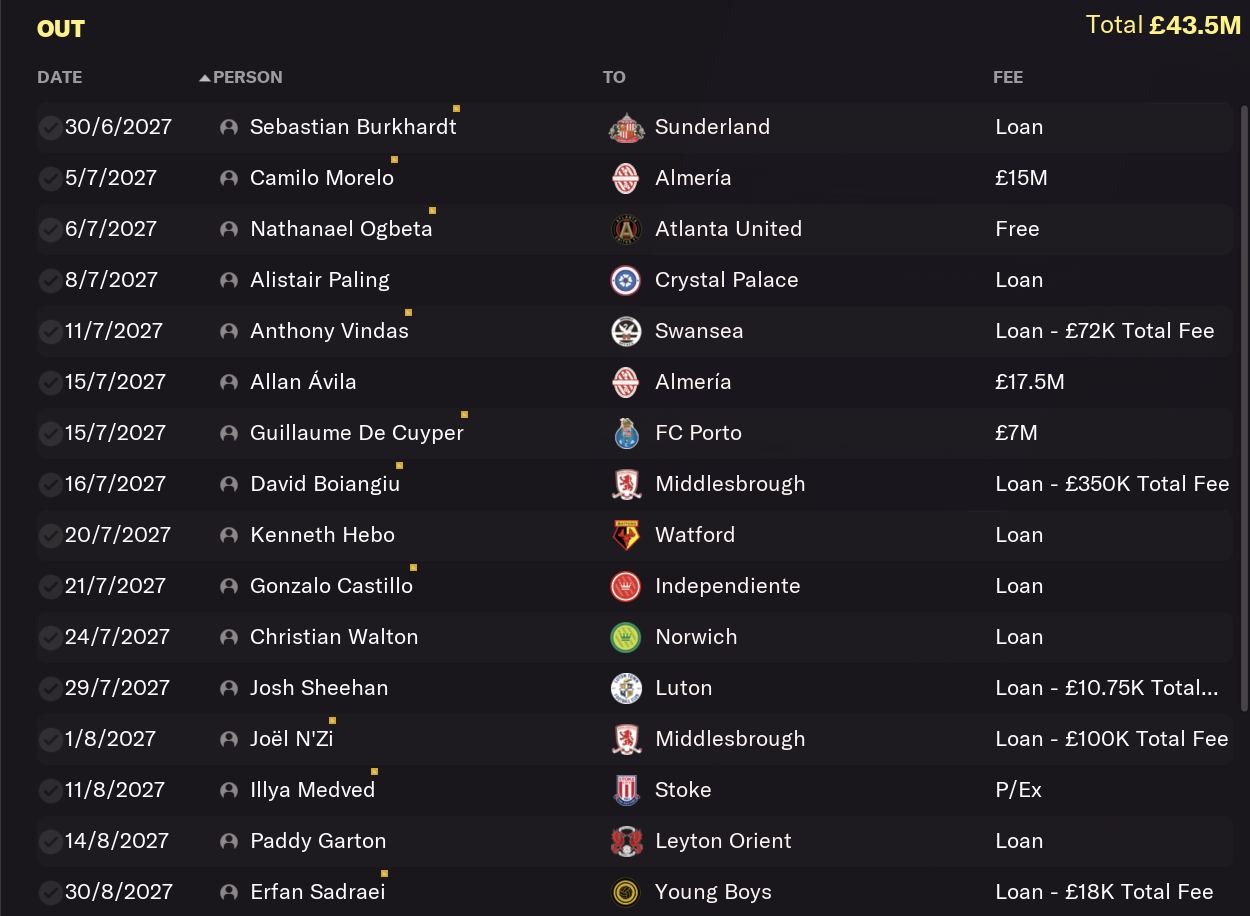 Bear in mind that the players I sold, were paid mostly in cash, while most of the players I brought in are being payed in installments.

During this season I signed 5 first team players, some of them very young with lots of room for improvement.

I also bought many wonderkids that were sent on loan, such as Castillo, Kosik and Marco Antonio.

At the beginning of the season the media predicted that we were going to finished in 20th position, we finished 5th. 😁

The squad personality is very determined personality, as I like my teams to be mentally very strong.

Gateshead has a National reputation, I hope to have a continental now that we are going to play in the European competitions.

I am considered a club legend since since my forth season at the club. 😀👍 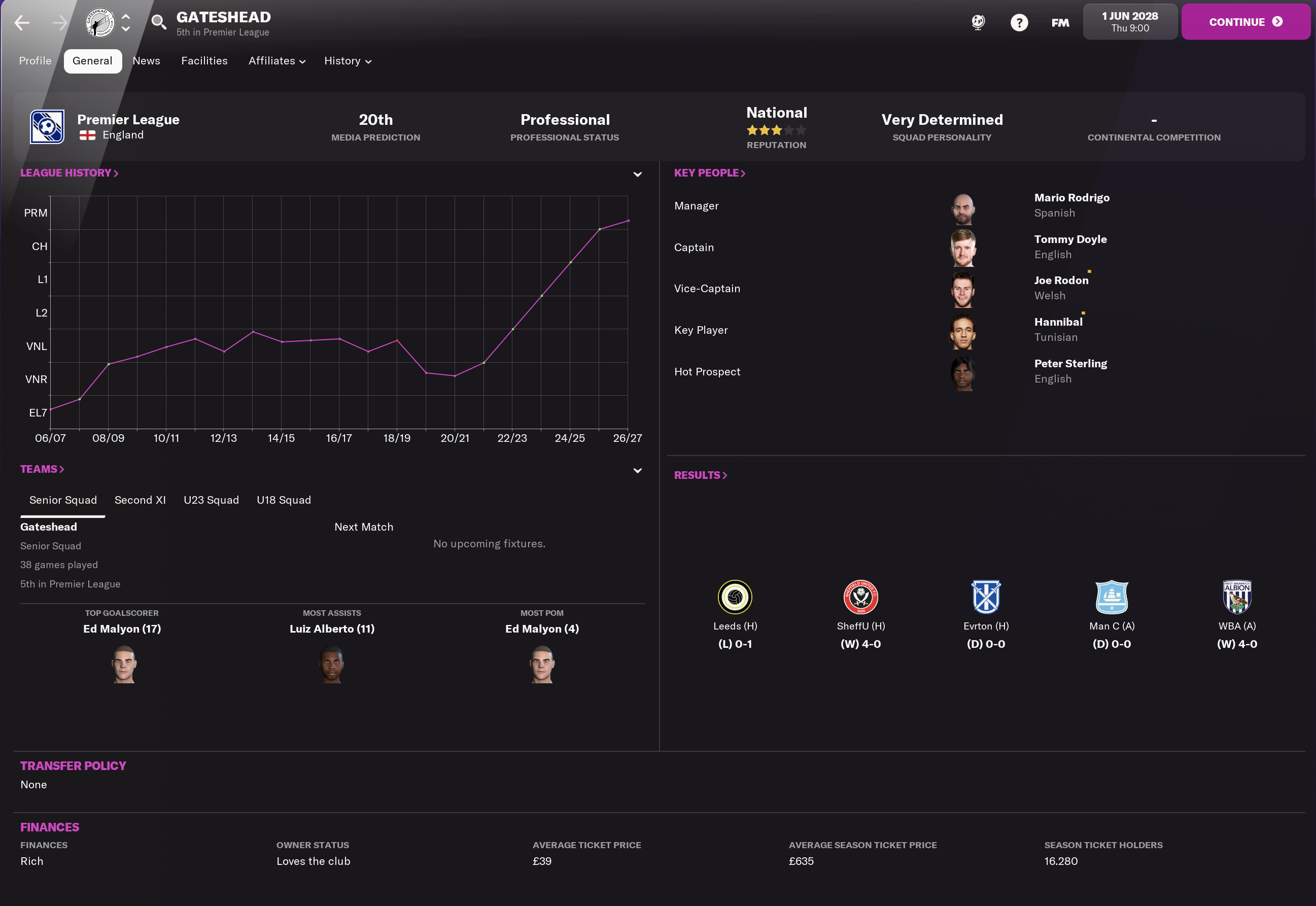 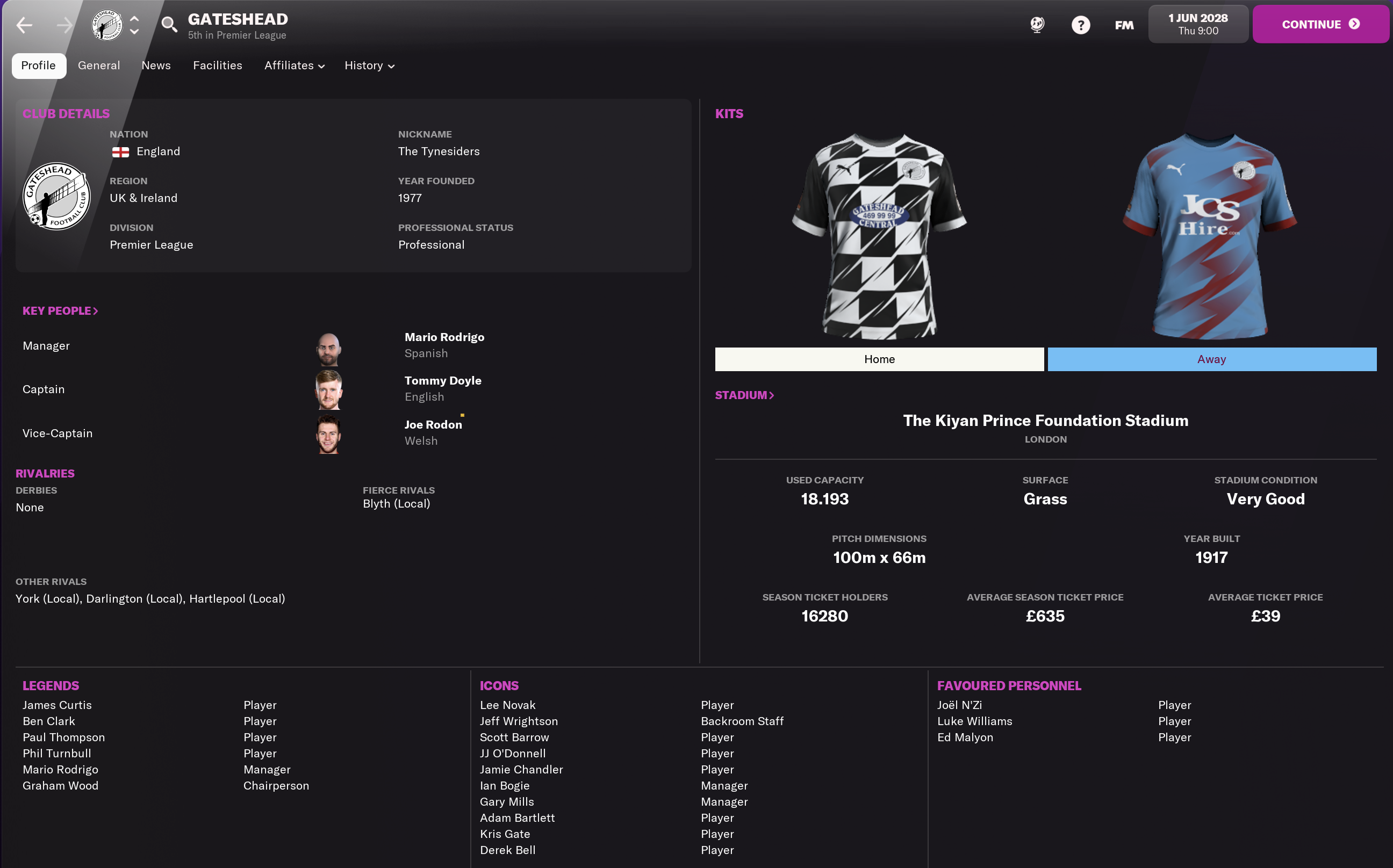 During this season the training facilities were upgraded to “great” and the youth ones now are excellent.

The junior coaching academy is average, but the youth recruitment is exceptional.

Next season we will be playing in our new stadium! 😁👍

I will be upgrading the facilities up to state of the art quality. 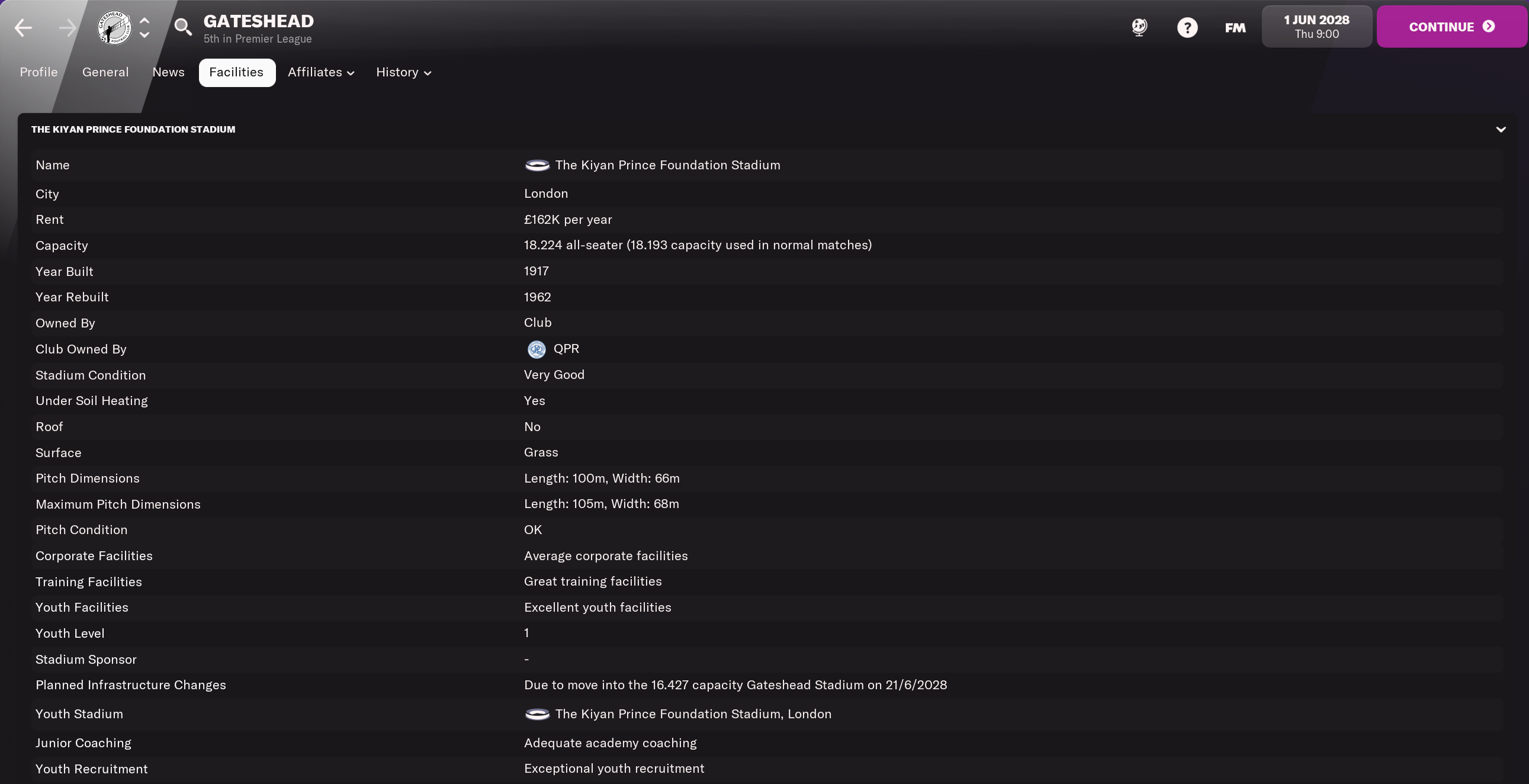 The overall balance is GBP 40.6M, I am very happy with this. 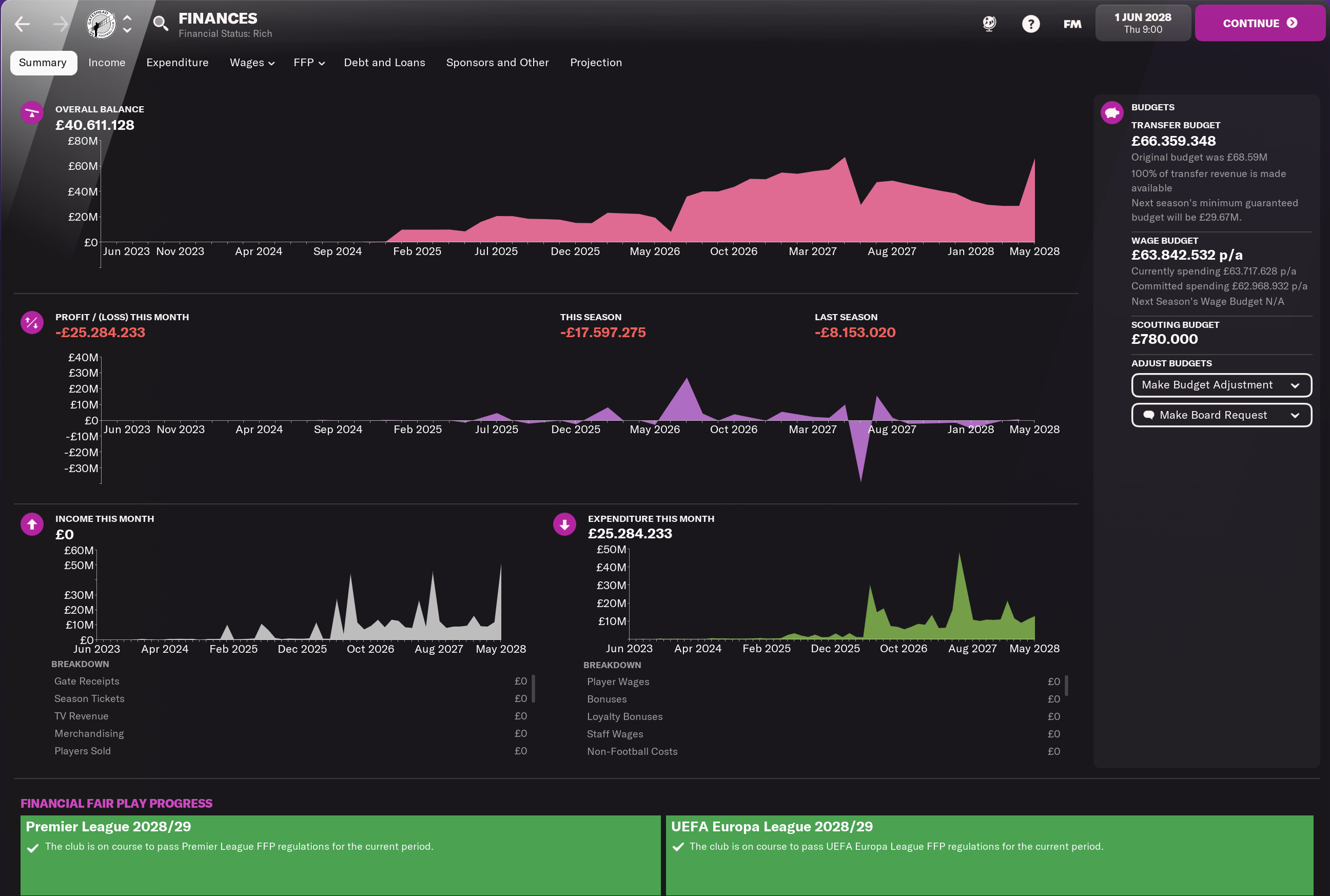 During this season I used my wide 4-2-3-1 lower league attacking tactic, which was successful in the last five seasons. The dynamics are great and I have one big tight core social group. Dynamics are very important.

Gateshead now has a lot of young potential elite players, may of them already with first team current ability. 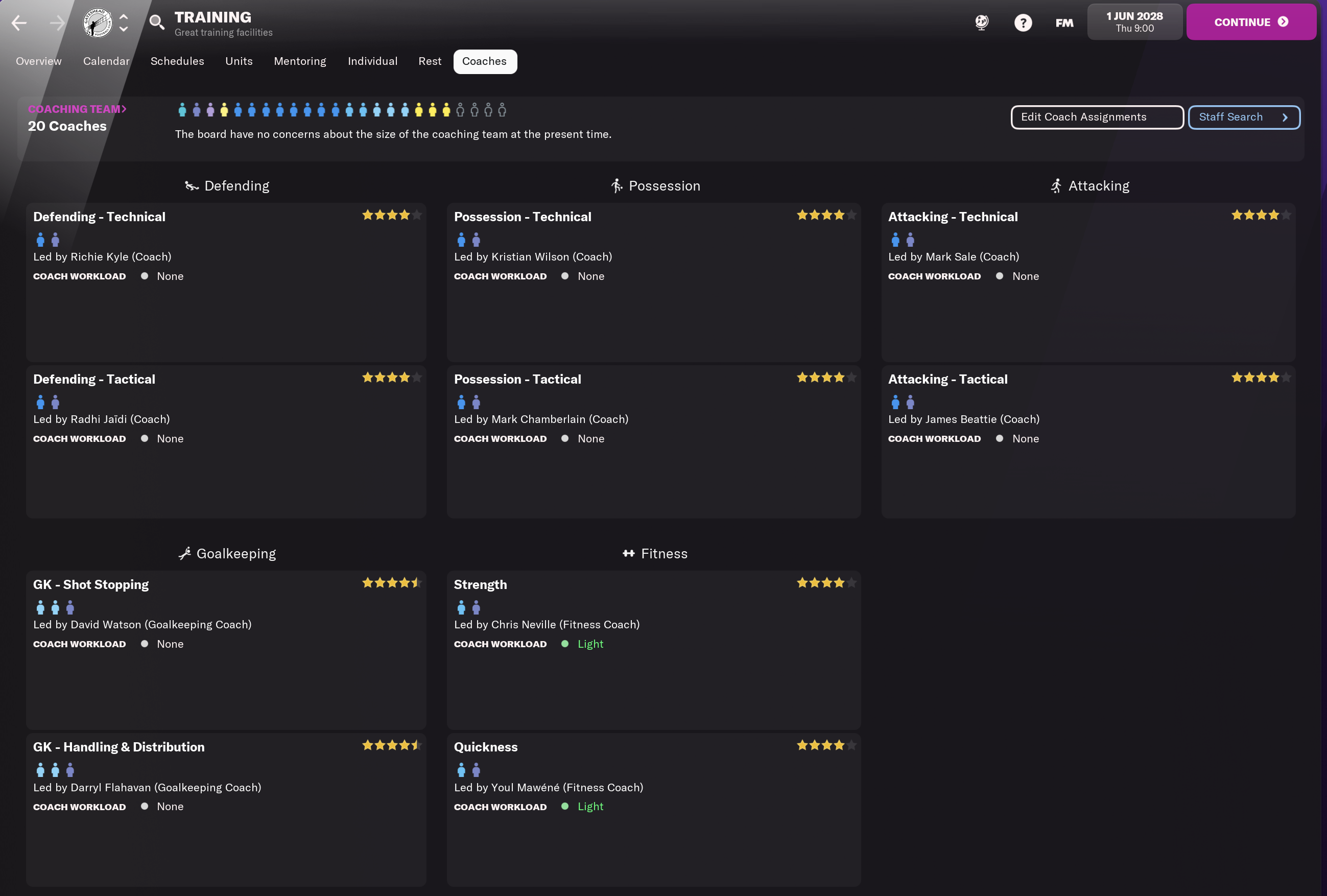 As in the last five season’s I trained the players with Andrew Gibney’s schedules.

The Club Vision for Next Season I really hope you are enjoying this FM story and that it may inspire you on your own saves! 😃 🙏👌

See you next season.