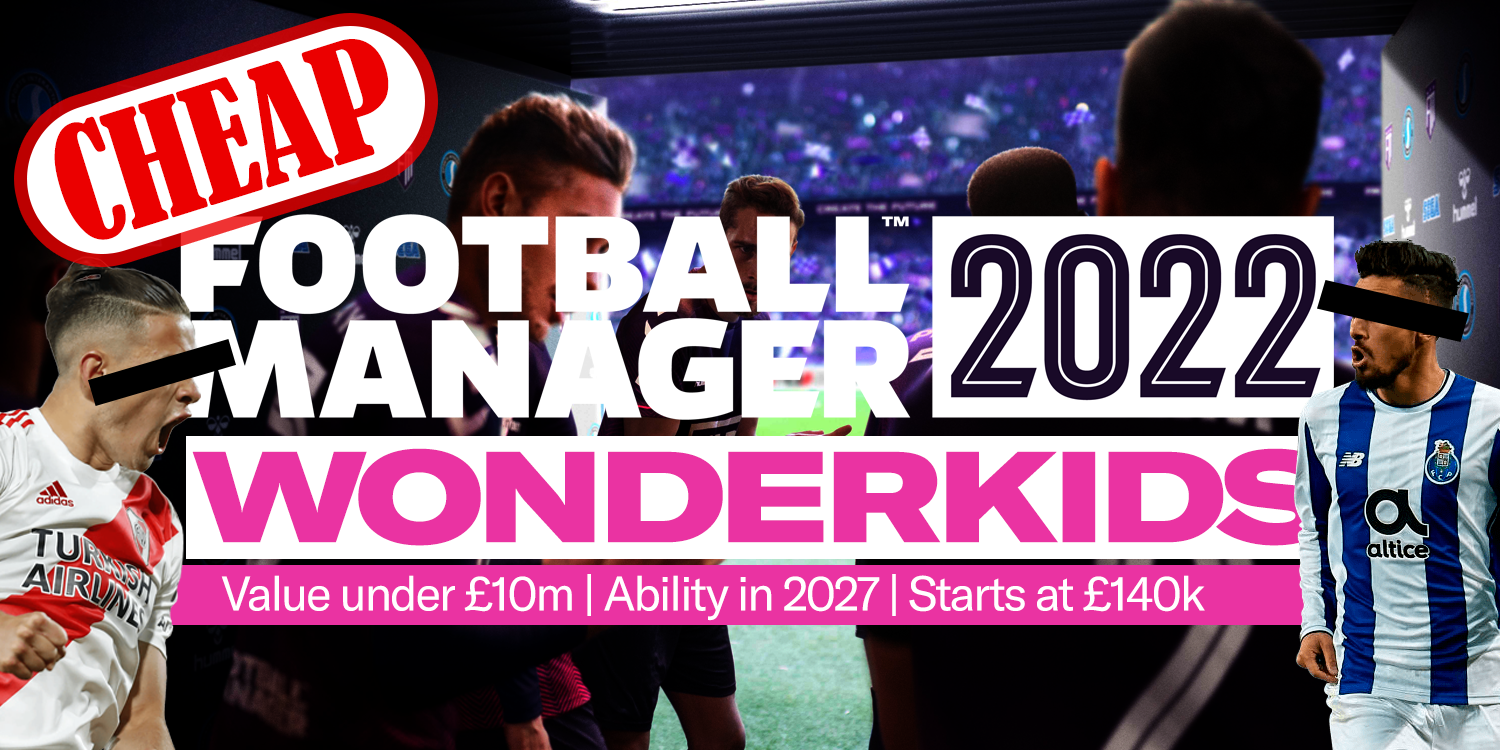 It’s here. You know you have been waiting for the best FM22 cheap wonderkids from the Football Manager 2022 Beta release.

We have been through six years on gameplay to pick out all the young prospects destined to become superstars, but also FM 22 bargain players.

Every wonderkid on this list starts the game with a valuation of less than £10 million, making it the idea place to pick of the best cheap players in FM 2022. Especially the centre-back who looks like he could be the new Marcel Desailly at Chelsea.

Our Football Manager 2022 cheap wonderkids  – check out last year’s list – have potential to reach the very top. Some will no doubt have flexible PA, meaning they could vary in your save and there is one player you will struggle to sign as he is out on loan, but the other 24 should be possible and cheap.

It feel like Arezo has been a wonderkid for all of time, but the Uruguayan forward still plays for River Plate and no future deal has been agreed. The teenager is still an absolute bargain, especially as he already looks a top player before you begin to train him up.

For someone who costs less for £2million, in 2027 he is worth more than £50million for Brighton. Sell and they will make a huge profit.

The valuation for the Brazilian centre-back is a little off, but you are still able to pick him up for around £10million, and as you will see below, Manchester United did and he looks a defensive superstar.

At 23 years old, to have 16 Tackling, 14 Marking and 15 Positioning, he could become an absolute monster.

Starting in the Sparta Prague U19s, Karabec may not look anything special, seemingly lacking in both technicals and mentals, but given game time, the Czech midfielder develops into a physical monster with 15 First Touch and Technique.

Crazy to think that in 2027, the 24-year-old was struggling to find game time at Elland Road, but still looks impressive. It feels like he could become even better.

Porto know what they are doing when it comes to young talent, and they are not going to let this teenager go without a fight. He’s already fast, with 16 Dribbling and 15 Technique.

Surprisingly, Conceicao’s numbers don’t seem to have jumped as much as you’d expect by 2027, but perhaps because he was already excellent. Classed as an Elite winger, he is a ready-made star.

How good are Serbian clubs at producing these little gems. It’s rare these days to find players who can dribble and cross, and with Jovic having 12 for both at just 18 bodes very well for his future.

Lyon snapped up the winger and it looks like he can also become natural on the right, with his speed, and technicals both taking a jump. At 24 years old, you know one of Europe’s big clubs are about to come calling in 2027.

Show me a full-back, especially with a left-foot, who can dribble AND cross and I am ALL IN. It is actually very rare in Football Manager, so this teenager will be in high demand.

It’s no surprise to see Roma swoop for the Danish defender. His technicals have not increased as much as you’d like, but they are still high and his mentals and technicals are superb. A must buy at any price.

If FM22 Cheap Wonderkids is not your thing, every year we test countless tactics and review the very best. For FM22 these systems will be ranked and listed within our tactics index linked below.

Almada has been a certified wonderkid for years now and FM 2022 looks to be no different, and can you blame the database? The technicals, mentals and physicals are already there and he’s still not 21.

By the time he’s 26, playing for Benfia, he’s an Elite midfielder who can pretty much play anywhere. If this is to be his last year as a wonderkid, go snap him up.

If you don’t like a Brazilian wonderkid, what are you even doing here? Even better, why did you buy the game? Renan goes back to the school of full-backs who aren’t great at crossing. Perhaps he could be perfect for the Wide Centre Back role.

My hunch is correct, at 25 Renan is a three star WCB for Real Madrid, which means he’s pretty damn good. Look at the physicals and mentals. Woof.

In FM21, you could pick Nianzou up on loan for the season, maybe two if you are lucky. Now, you will need to stump up for the Frenchman. He looks the complete package at 19.

Chelsea picked him up and he could easily be one of the best defenders in the world in 2027. Marking and tackling could be higher with training, but everything else is elite.

Our first 16-year-old on the list and you can see the gaps in his game. The speed, dribbling, flair and determination give you hope of a bright future.

Leipzig feels like the ideal home for Angelo in 2027. His mentals his shot up, as has his crossing ability. Still only 22, there could be more to come as he blossoms in the Bundesliga

A driven personality will go a long way of a young player reaching his potential, but in 2021, he doesn’t look like a game-changer.

Wowzers – yes, we said wowzers – look at Luca in 2027, playing for Hertha. He has the holy trinity of Dribbling, Finishing and First Touch. Mentals and Physicals on point. Definitely didn’t see that coming.

We know he’s 22, and technically not a wonderkid, but he’s a goalkeeper. It’s different. Not the tallest, but he has the Reflexes, Agility and Aerial Reach to overcome his size.

By 28, Brenno should be close to his prime years, and with those attributes he should be enjoying his time in Spain. Just don’t pass the ball back to him

Instantly, what stands out is that Oddei must improve his technical ability if he wants to play as an Inverted Winger or Centre Forward. Physically, he’s fine, but it means little if he can’t contribute with the ball.

Improved they have, but perhaps not enough to be elite. Valencia disagreed, but you can see when he has the ball at his feet, he should be OK and the mentals should help him at the highest level.

The River Plate forward is currently one of the most exciting players in South America, and you can see why. He has the technicals, the Composure and Off The Ball to make an impact.

Atalanta will be enjoying his skills in 2027, with all the important attributes showing green. That’s what counts. With more playing time he could improve further in your save.

The Ludogorets youngster looks as good as he is versatile, and this could key to his development. Pick wisely. He could be a Mezzala, if the decisions improve. Winger seems the easiest spot for him to meet his potential as part of the FM22 Cheap Wonderkids.

Or a No.10. OK Ajax. His Vision and Passing are good enough in 2027, but the First Touch isn’t, or the Decisions. There’s a good player in there, depending on your training.

There’s a lot of red there isn’t there? Especially for an 18-year-old. The winger needs a lot of work, but he has Acceleration, Pace, First Touch and Dribbling.

Southampton took a punt on the Brazilian and his physicals, teamed with his Crossing and Dribbling almost make it worthwhile. He could be the next Adama Traore come 2027.

A product of La Masia academy, you know he is going to come out of there with the good technical skills and the right attitude. Plus, he’s versatile, perhaps due to their Total Football tendencies.

So many greens, it’s exciting to see for the Spaniard who looks to have developed into a very good Inverted Winger. You can see how he’d fit perfectly in the current Lille side, so no reason to think 2027 would be any different.

This kid has impressive attributes already. Look at his Passing, Technique, First Touch and Vision at 19. If his Potential Ability is high, he could be ridiculous.

Ooooft. 16s and 17s for Dribbling, First Touch, Passing and Technique. Technically excellent. Even in 2027, Mainz have gotten themeselves a superstar.

Will these types of players ever get the chance to play in Inter Milan’s first team? It’s doubtful. The biggest clubs don’t have time for youth, always looking to sign an existing star.

His development looks superb, adding a Dribbling presence to his physicals and impressive mentals. Torino are the team to have taken a chance on the Uruguayan and it has paid off.

The big Italian goalkeeper has the potential to be the next Gigi Donnarumma. He has the building blocks and just needs the right fit.

He may not be the fastest, but his goalkeeping stats are tremendous. Aerial Reach, One on Ones and Reflexes are all up above 15. This kid is going to save you some goals in FM22.

That was our list of the must buy bargain buys and best FM22 cheap wonderkids. It will not be a perfect list and we will review this after the full game drops, but there are some absolute bargains to be had.

Don’t forget you can buy FM22 through us and by supporting our content you receive an exclusive 30% discount, making the game £27.74. Click the link below to find out more and then you can go buy some FM22 Cheap Wonderkids