If you haven’t read it, here is my previous posts of this FM story.

At the beginning of the season the media predicted that we were going to finished in 7th position.

We got a determined squad, a local reputation and a professional status. 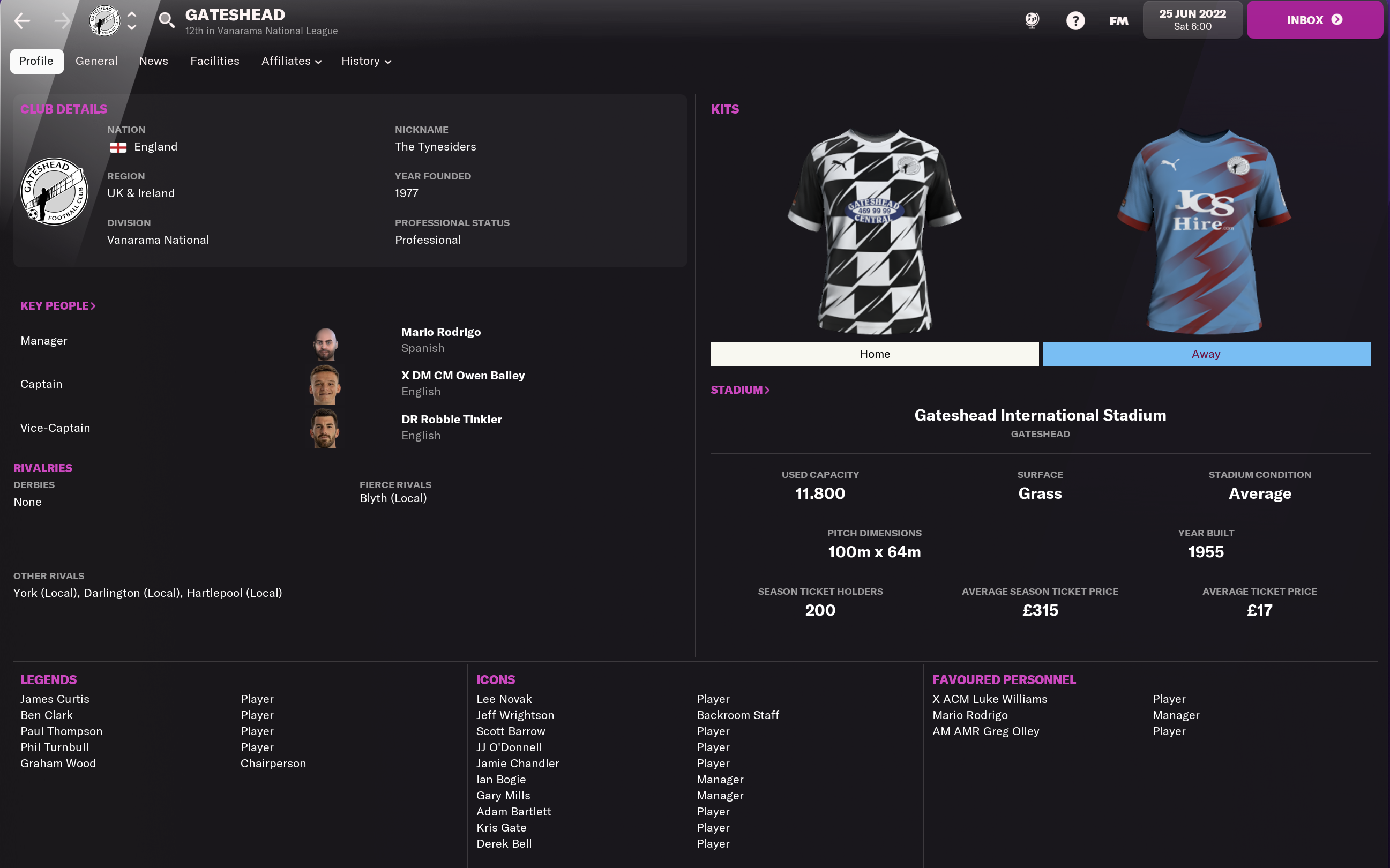 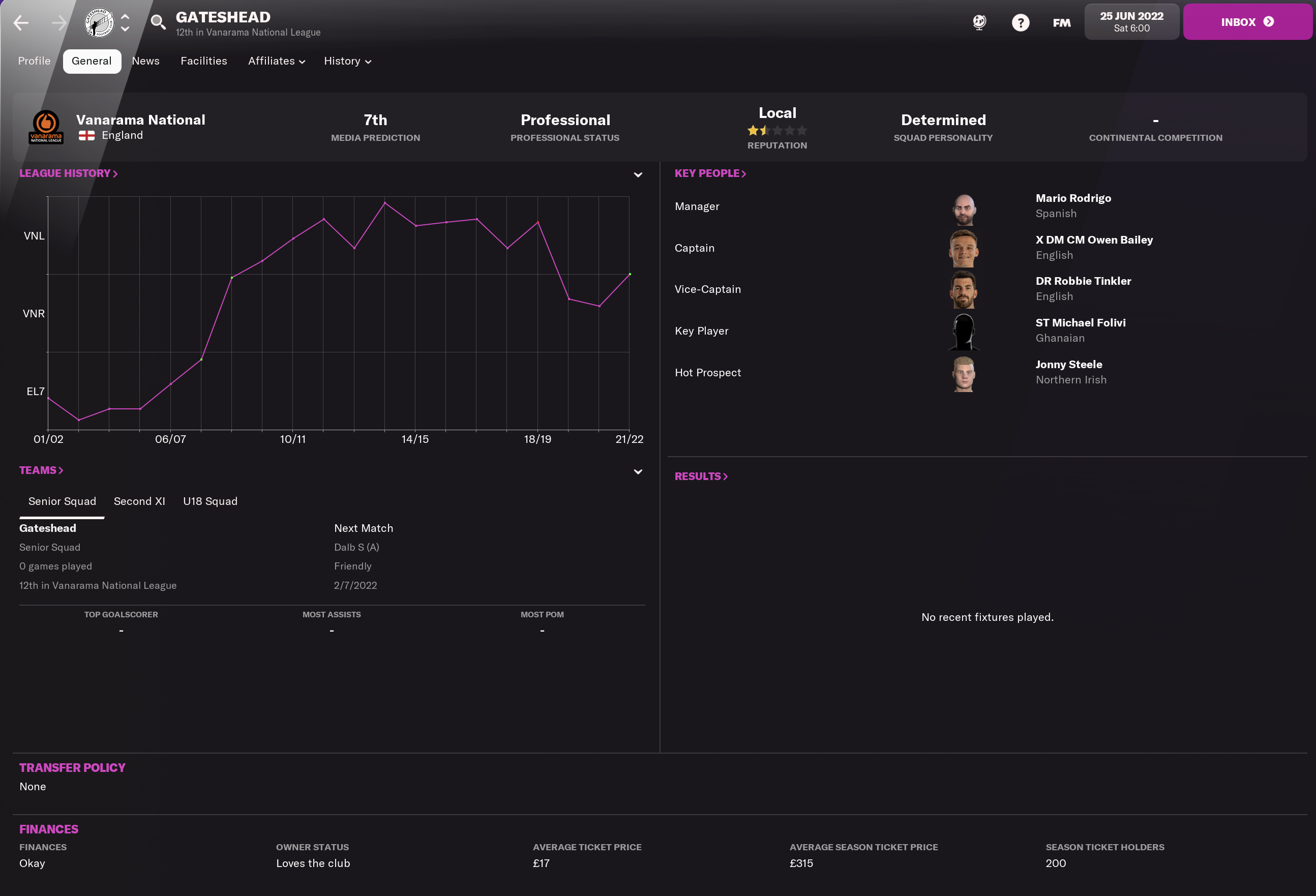 With odds of 7-2,  we are predicted to finish in 4th position, which is quite promising since we are newly promoted. 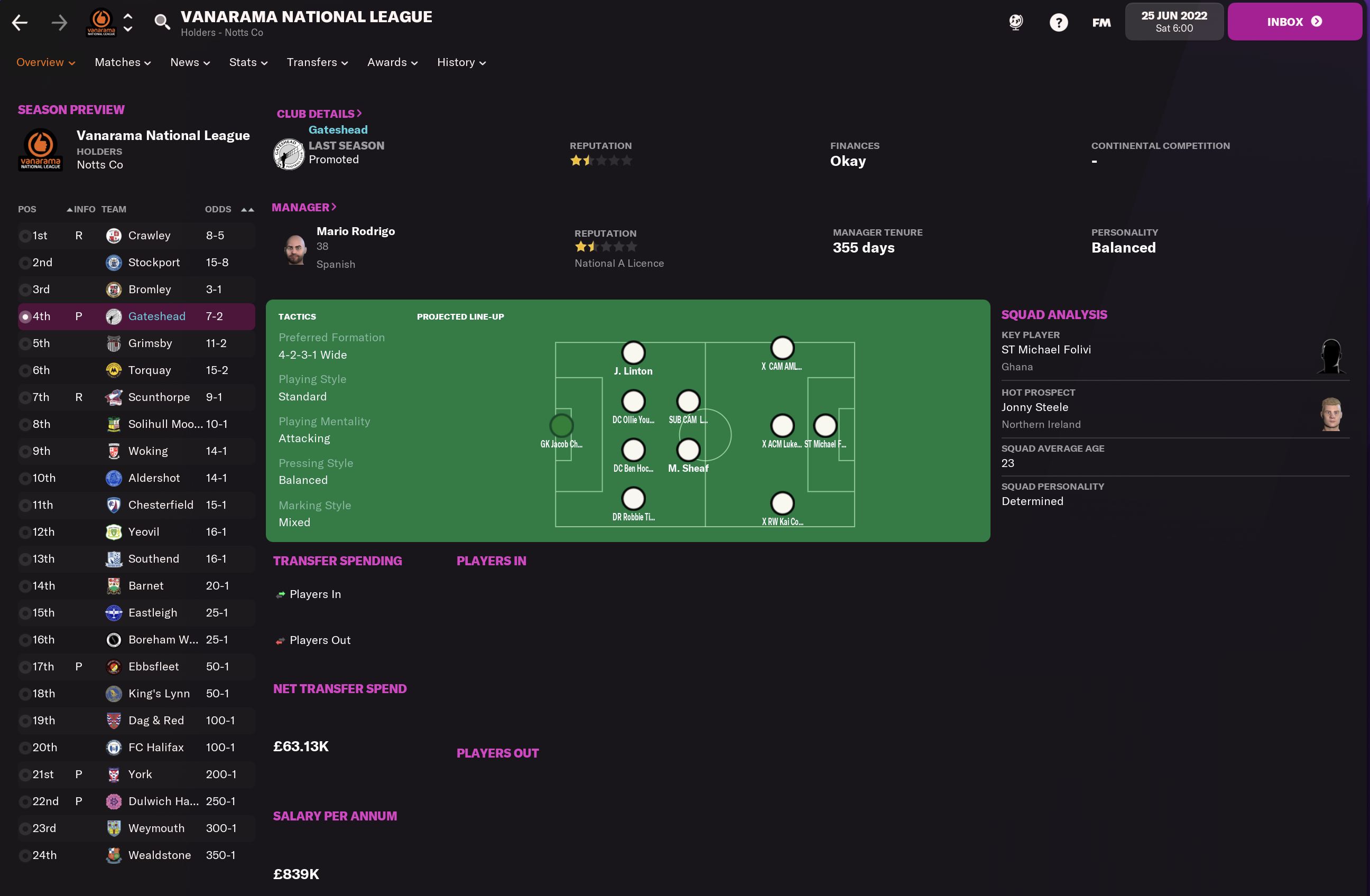 Club Vision and Board Expectations

The board expected us to fight bravely against relegation, to qualify for the 2nd round of the FA Cup and to make it to the semi-finals in the FA Trophy.

The wage budget at the beginning of the season was 20.2k per week and we have been given a transfer budget of £2,792. 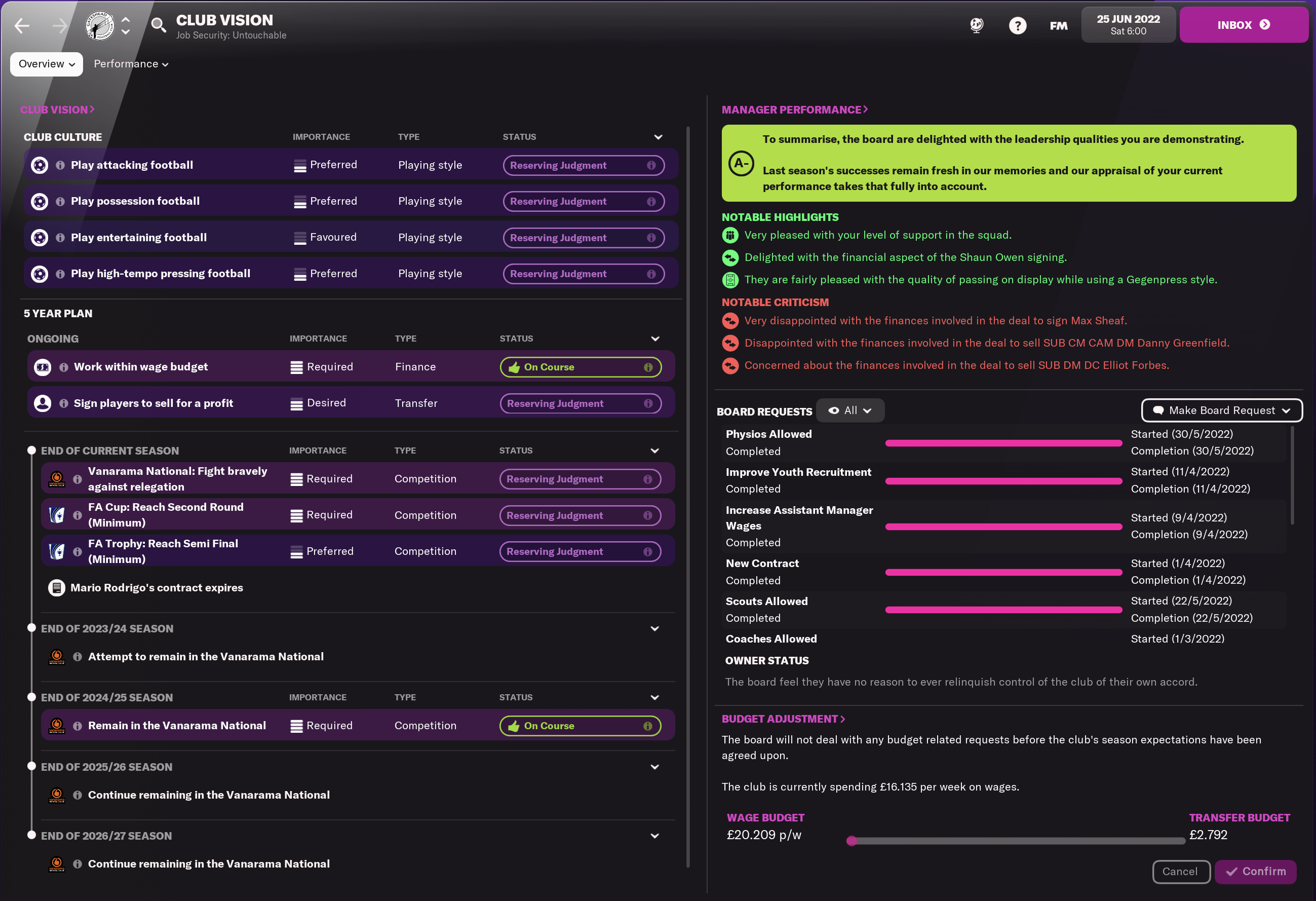 I managed to bring some new staff, now things are starting to look better with an average of 2.5 and 3 stars ⭐️ in each training category. 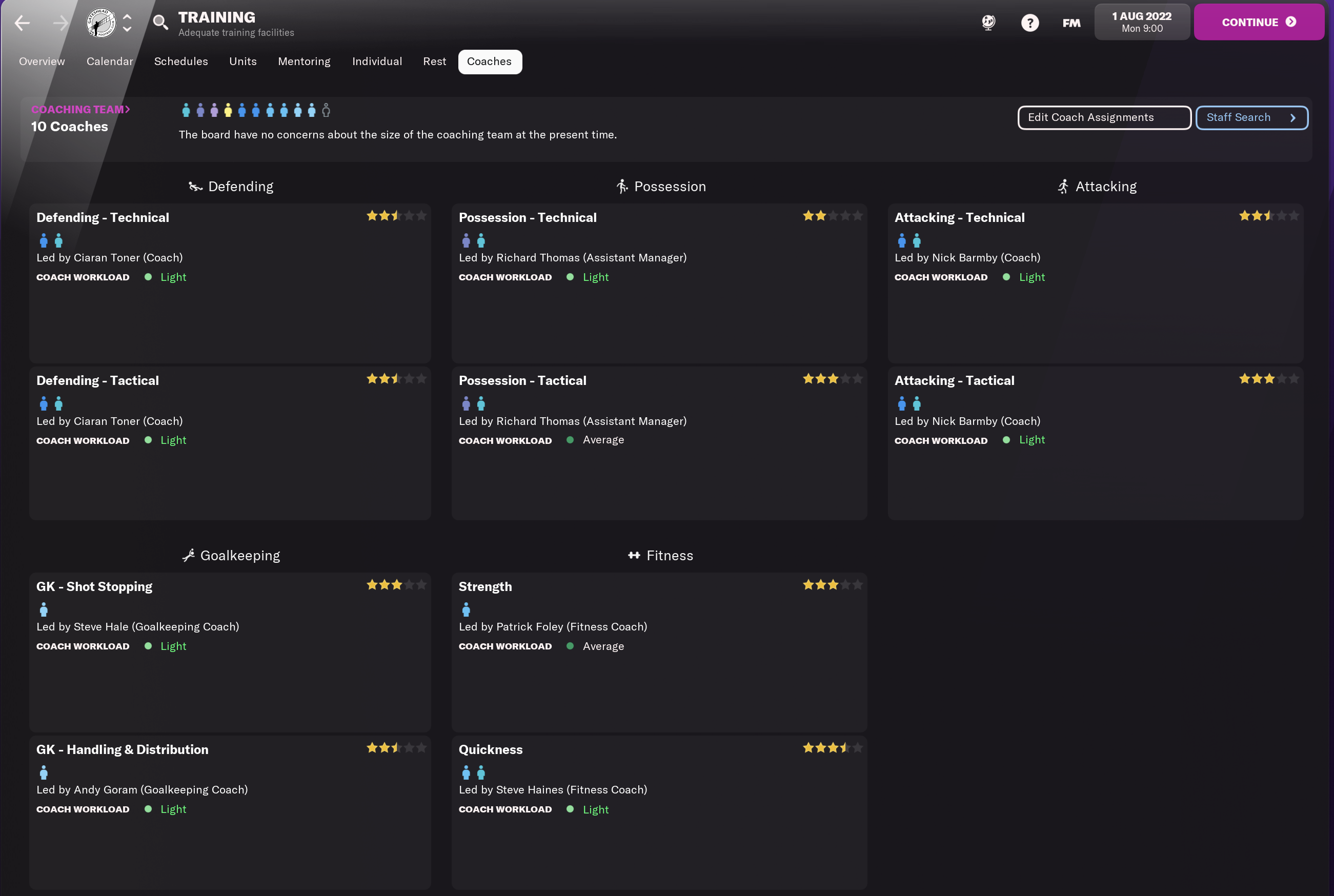 Again, this is something so important, if you want to have a great season, you got to get all those green lines as high as possible. 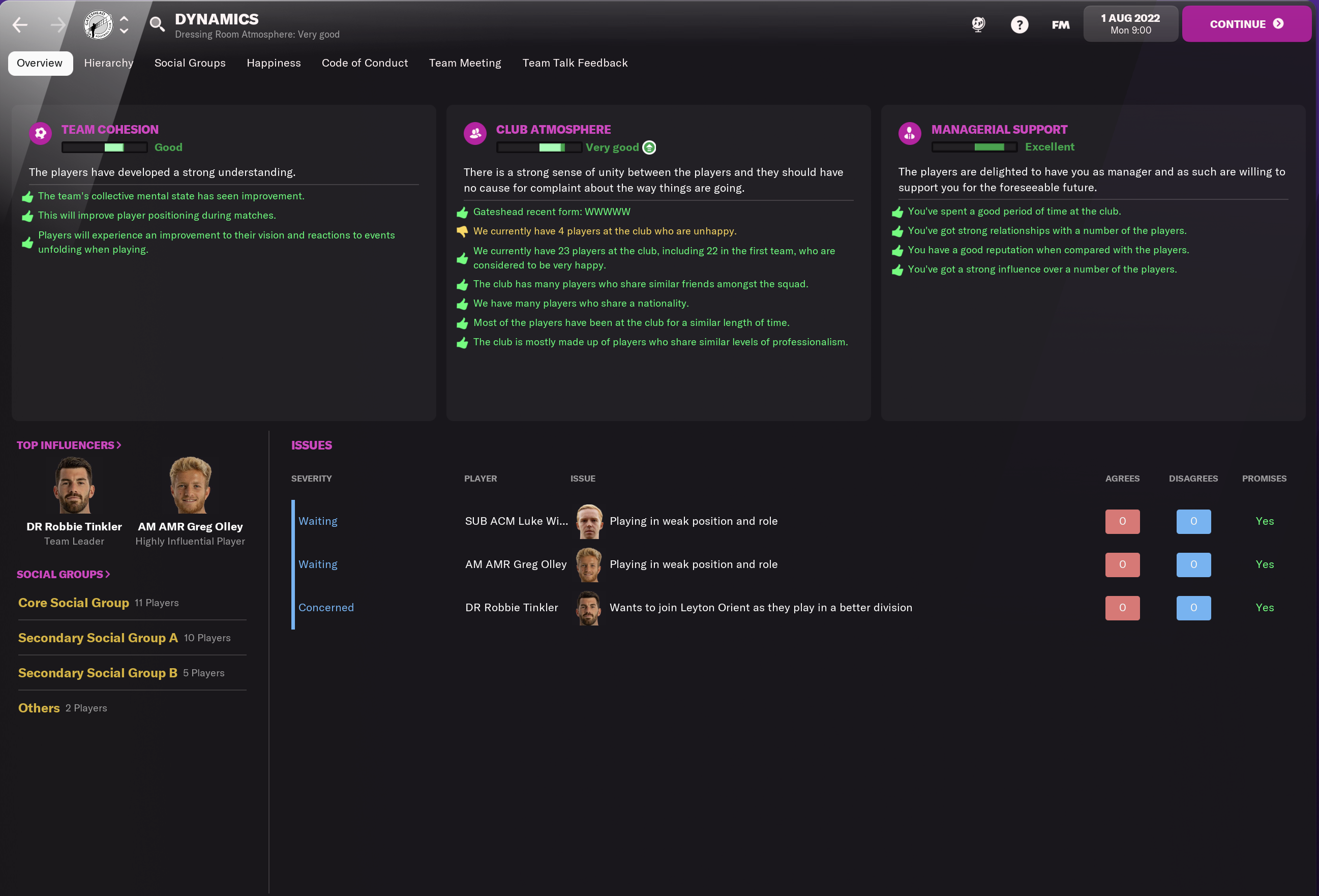 During this season I used my 4-2-3-1 lower league attacking tactic which was successful last season. 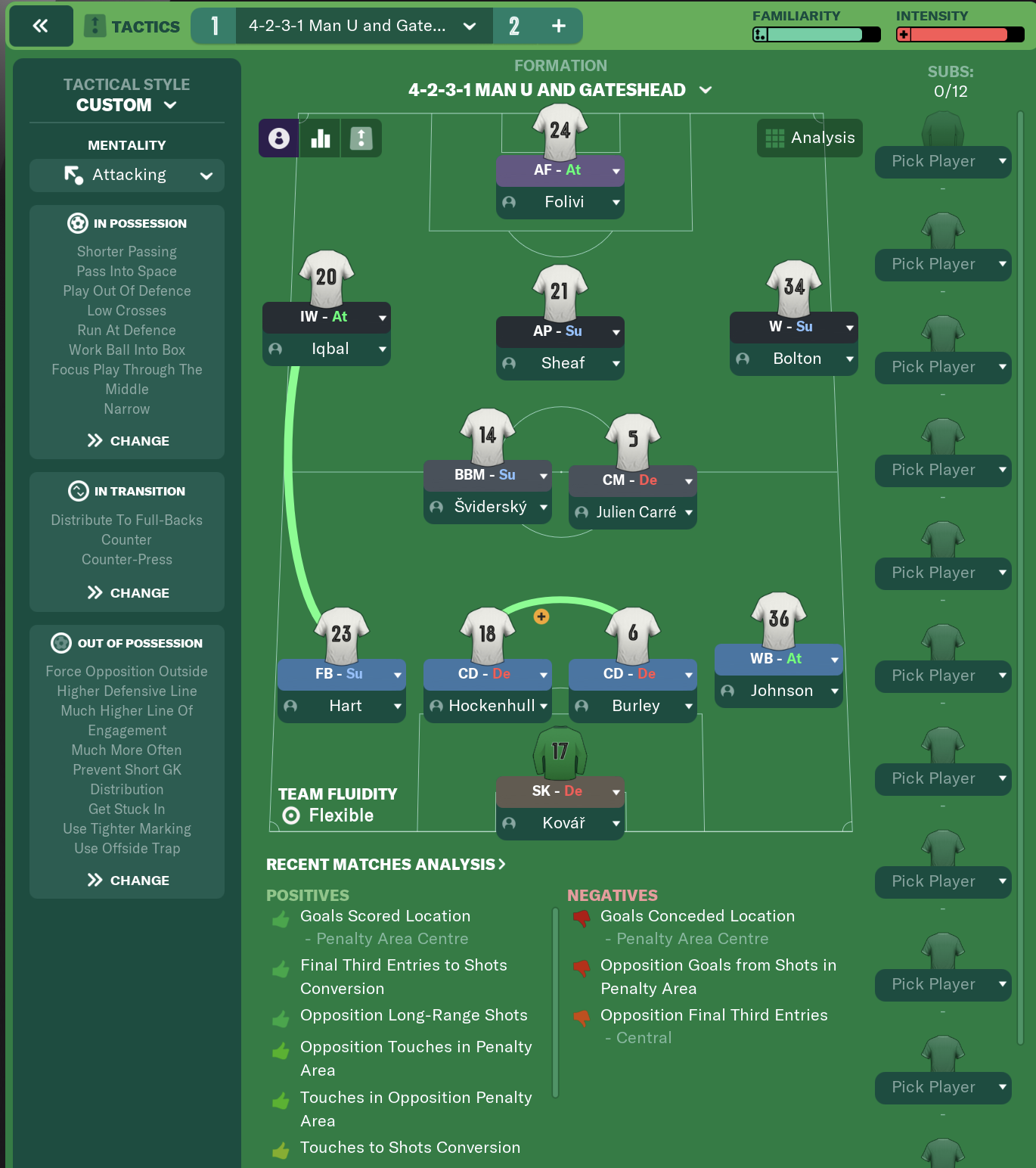 By the end of the previous season I brought 7 new players to the squad. Three of them were newgens from the UK and Ireland.

During pre-season and throughout the league we managed to sign 13 more players, two of them on loan from our new senior affiliate, Middlesbrough after we cancelled our previous affiliation with Sunderland. 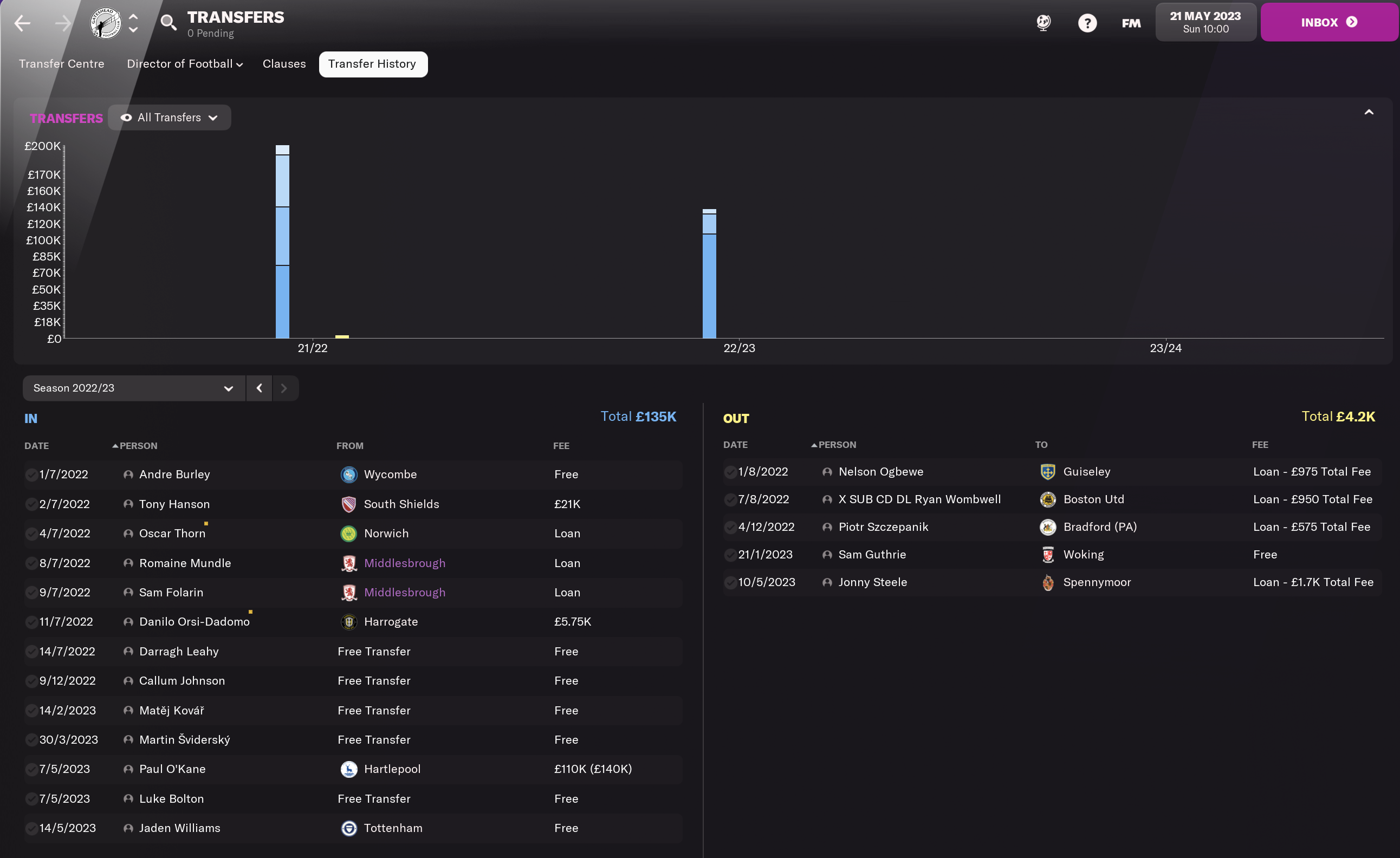 This is how the Tynesiders squad looked at the end of the season, lots of great players.

Many of them were rated at a League One or League Two level  by my Assistant Manager. 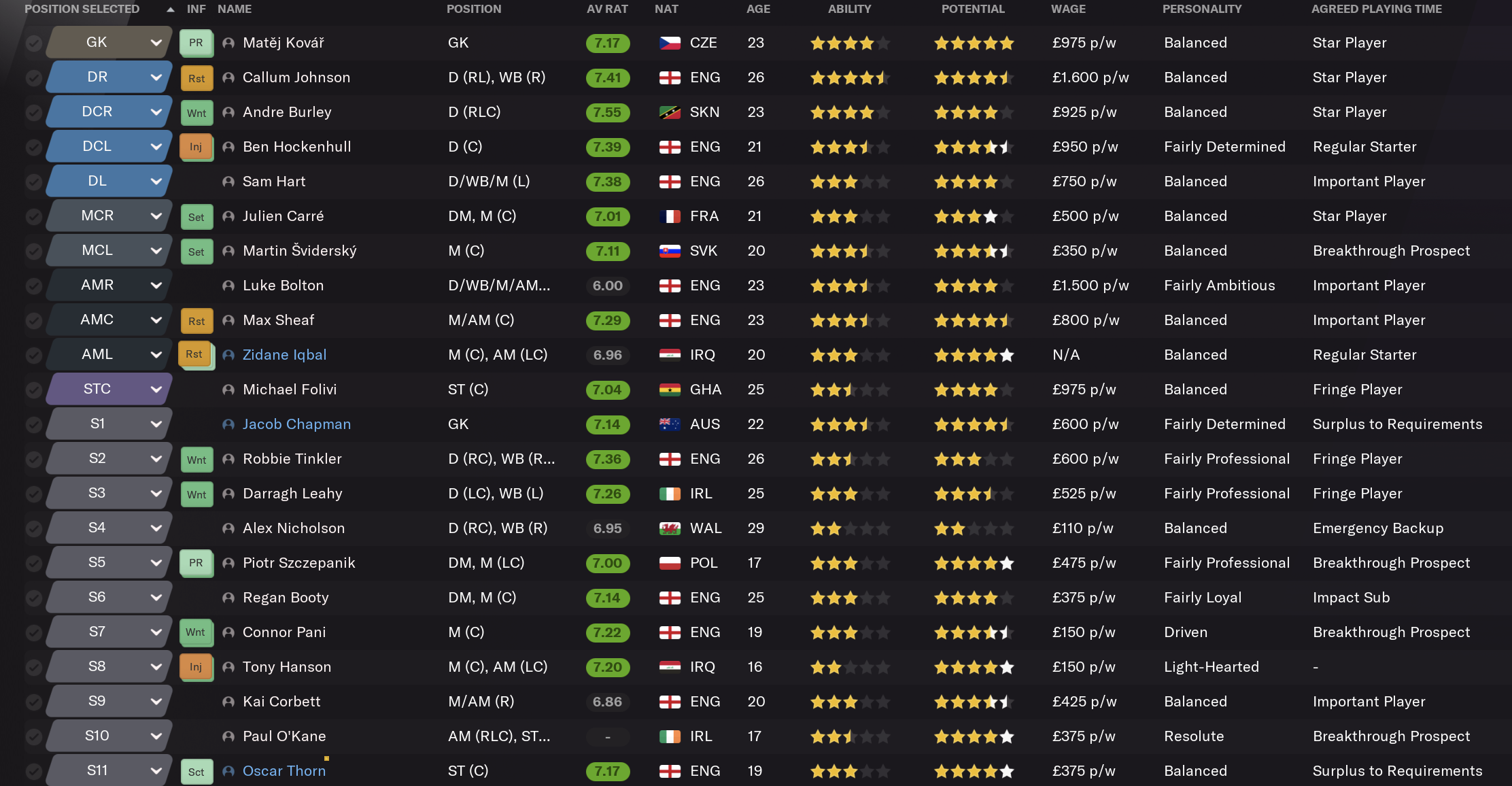 And pay attention to this, as it is one of my main strategies to grow a club and make lots of profits in the lower leagues.

After only two seasons, I already have 6 newgens signed from Ireland and UK. All with 4.5 or 5 stars of player potential who I believe can reach Championship or even Premier League level if they reach their full capacity. 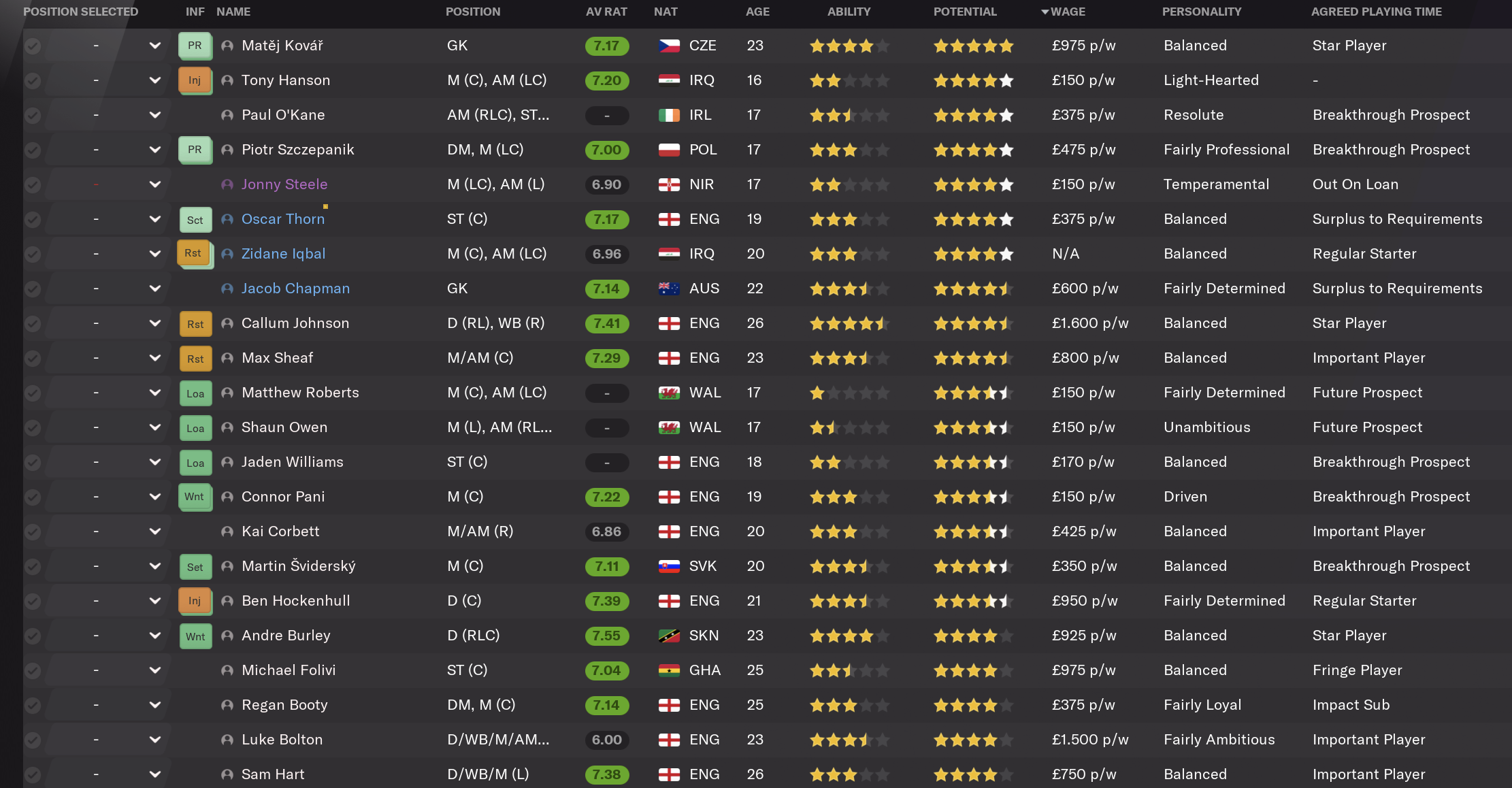 I was really disappointed with our performance in the FA Cup, we missed those more advanced rounds that bring so much cash to the club while in the lower leagues. Beaten 1-0 by League Two’s Port Vale in a very tight match, we should have done better.

Last season we won the FA Trophy, and the board expected me to make it to the semi finals, but……we did great and won it again!

Two seasons in a row!

In the final we defeated Stockport in a very exciting match. After going 1-0 down, with the game tied and heading to penalties, our striker Michael Folivi popped up in the 118th minute to seal the 4-3 win.

Just over 31,000 fans made the trip south to Wembley Stadium, showing the continued growth of our fan base.

Once more we did incredibly great over performing the initial expectations set on us.

We won the league, once again going undefeated. Two seasons in, we’ve yet to taste defeat in the league. 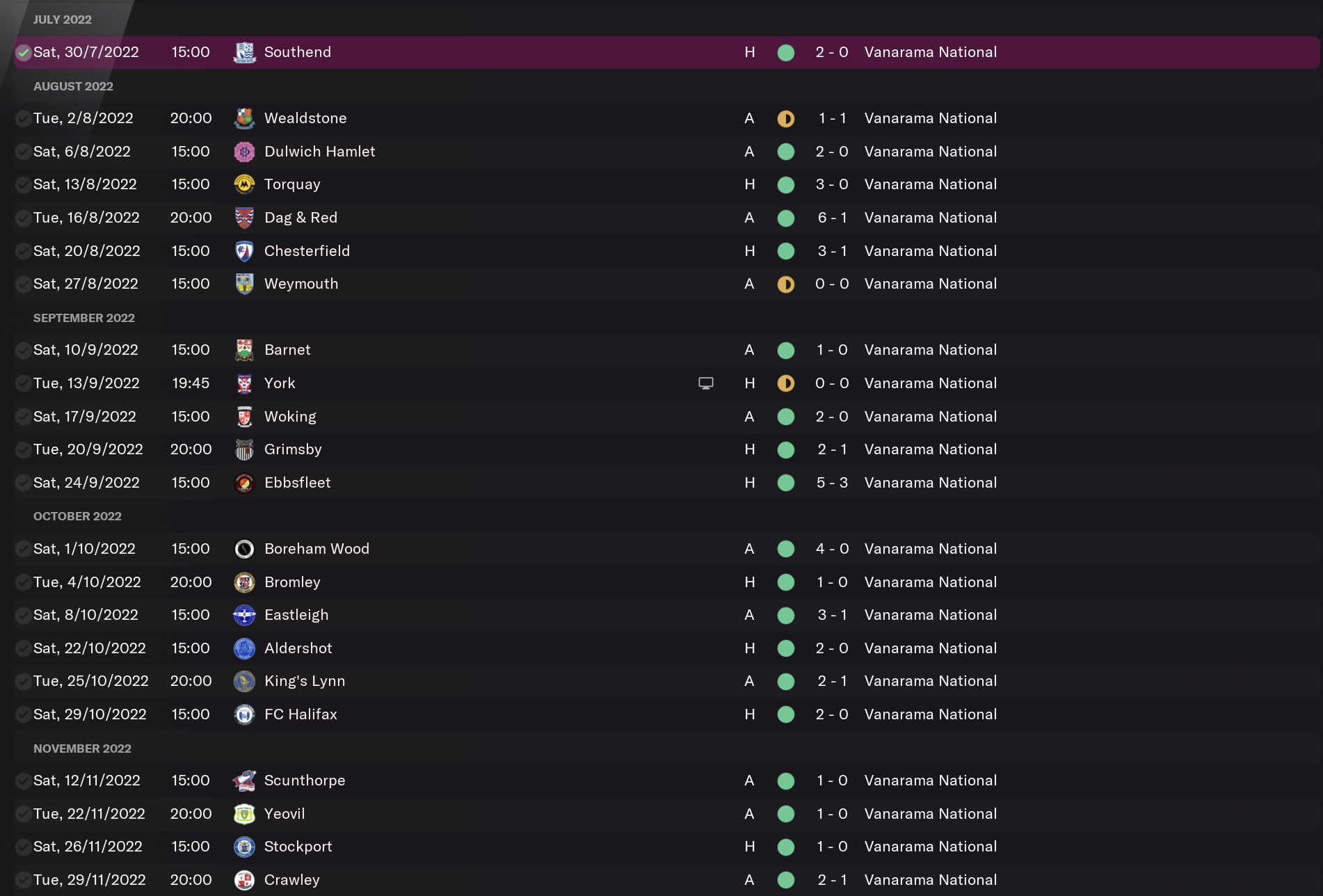 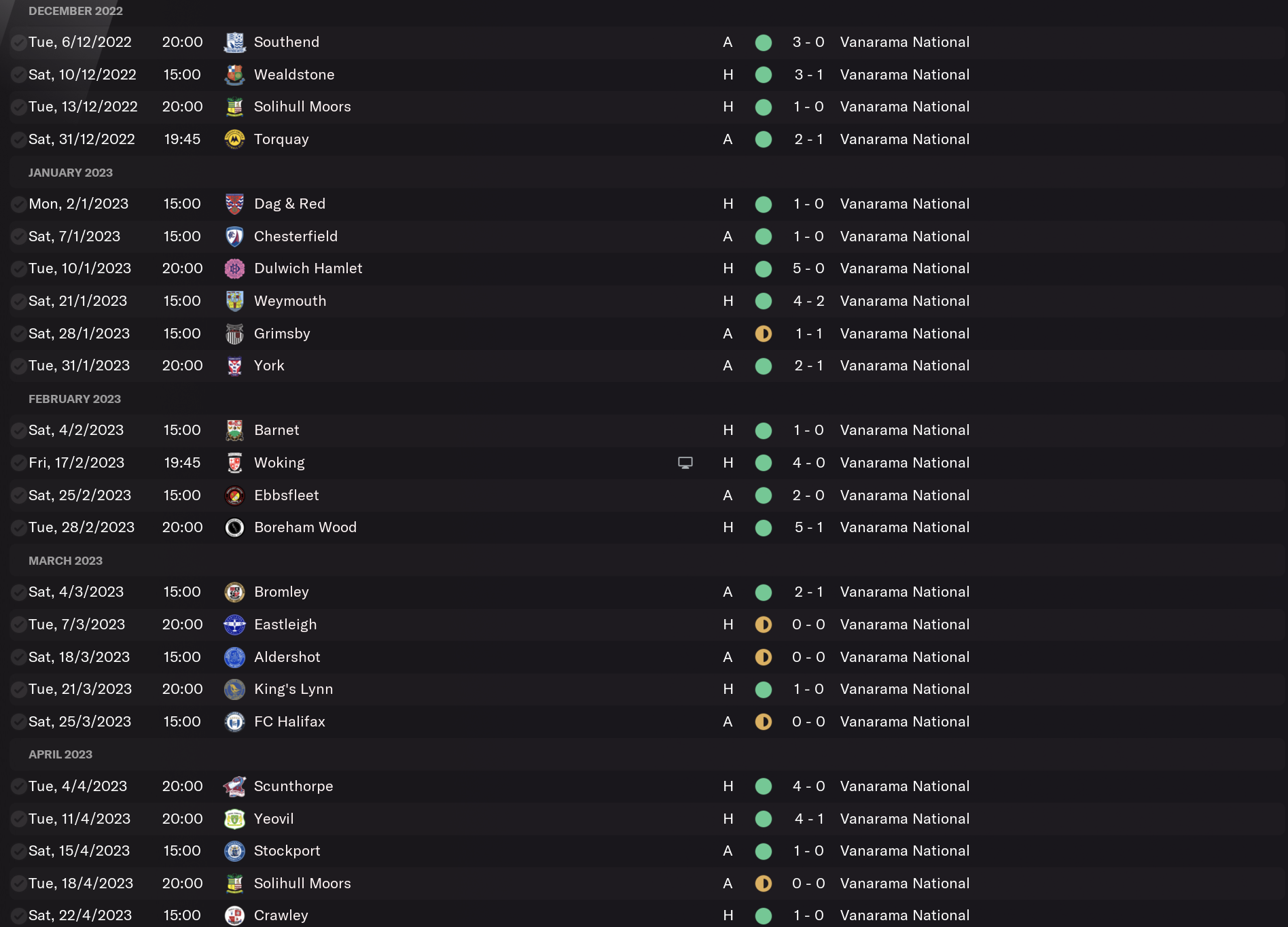 128 points with a 75 goal difference, 22 points ahead of runners up Grimsby Town. FA Trophy finalists Stockport got promoted in the play-offs. 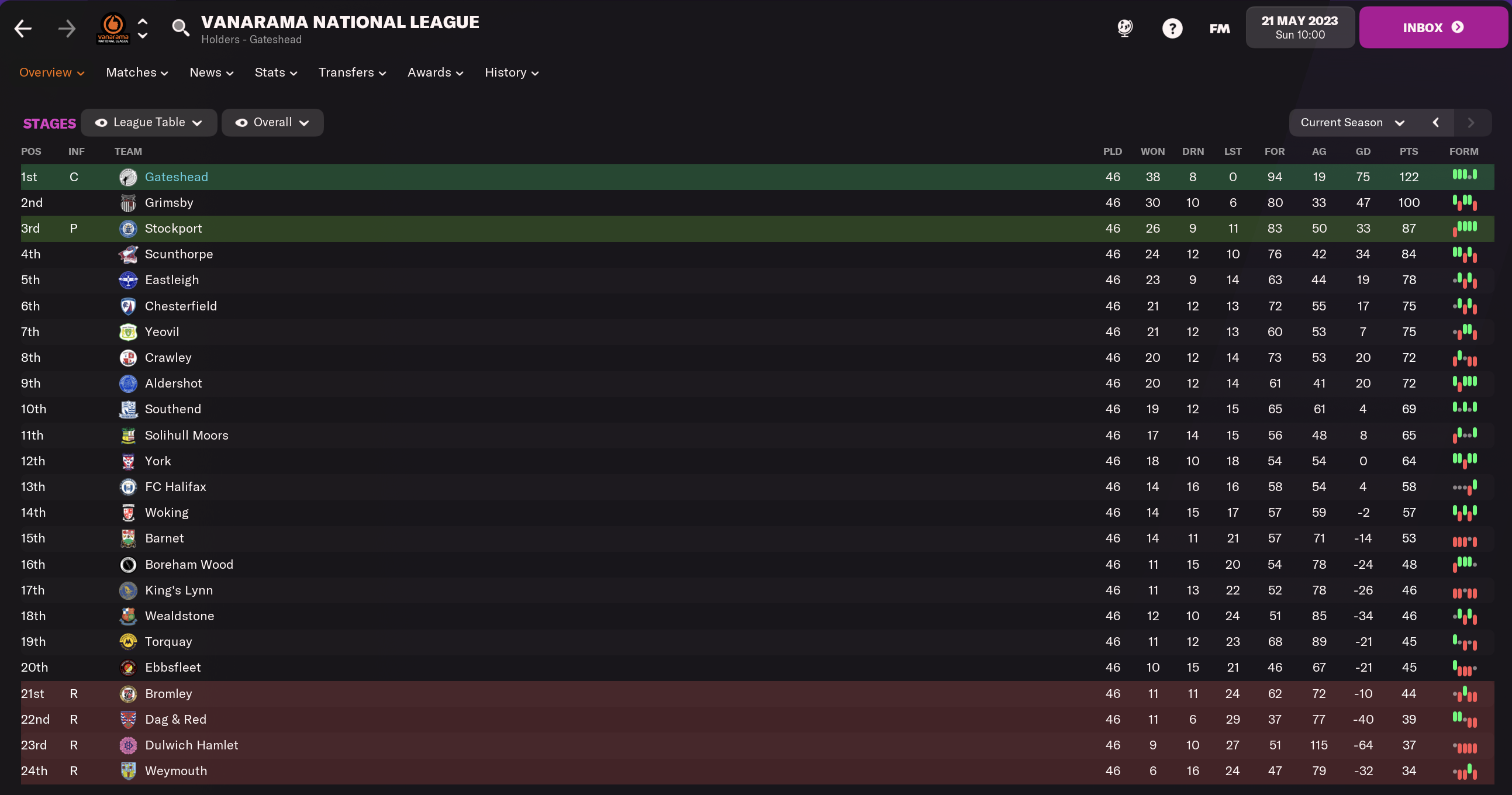 A 20-year-old Slovak player I signed for free after being released by Manchester United.

He already has 20 international youth caps. He is already at a League Two standard and has the potential to be a good League One player in the future. 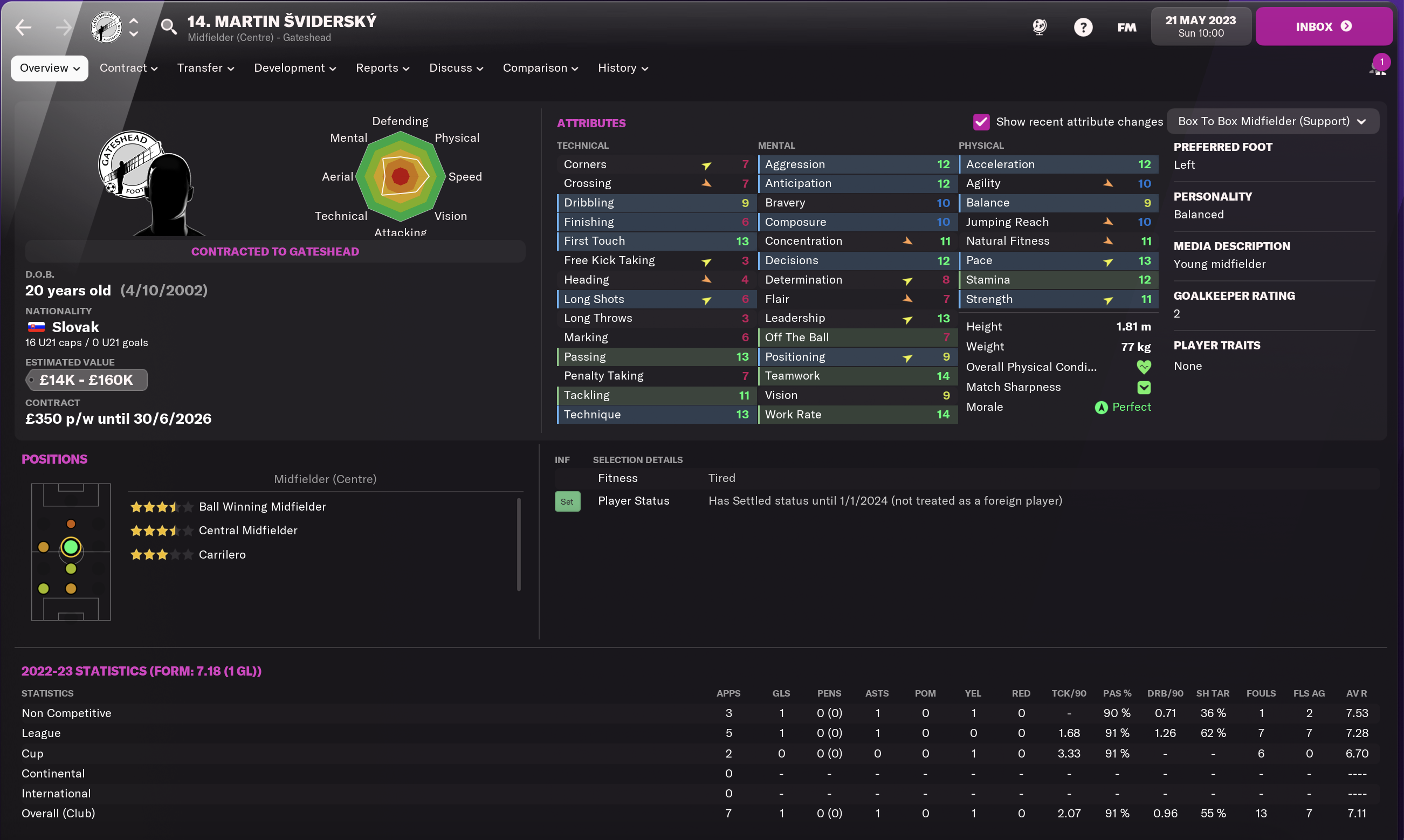 Andre Burley had a great season as our main centre-back, with 10 POM in 35 league games. I signed him on a free transfer. 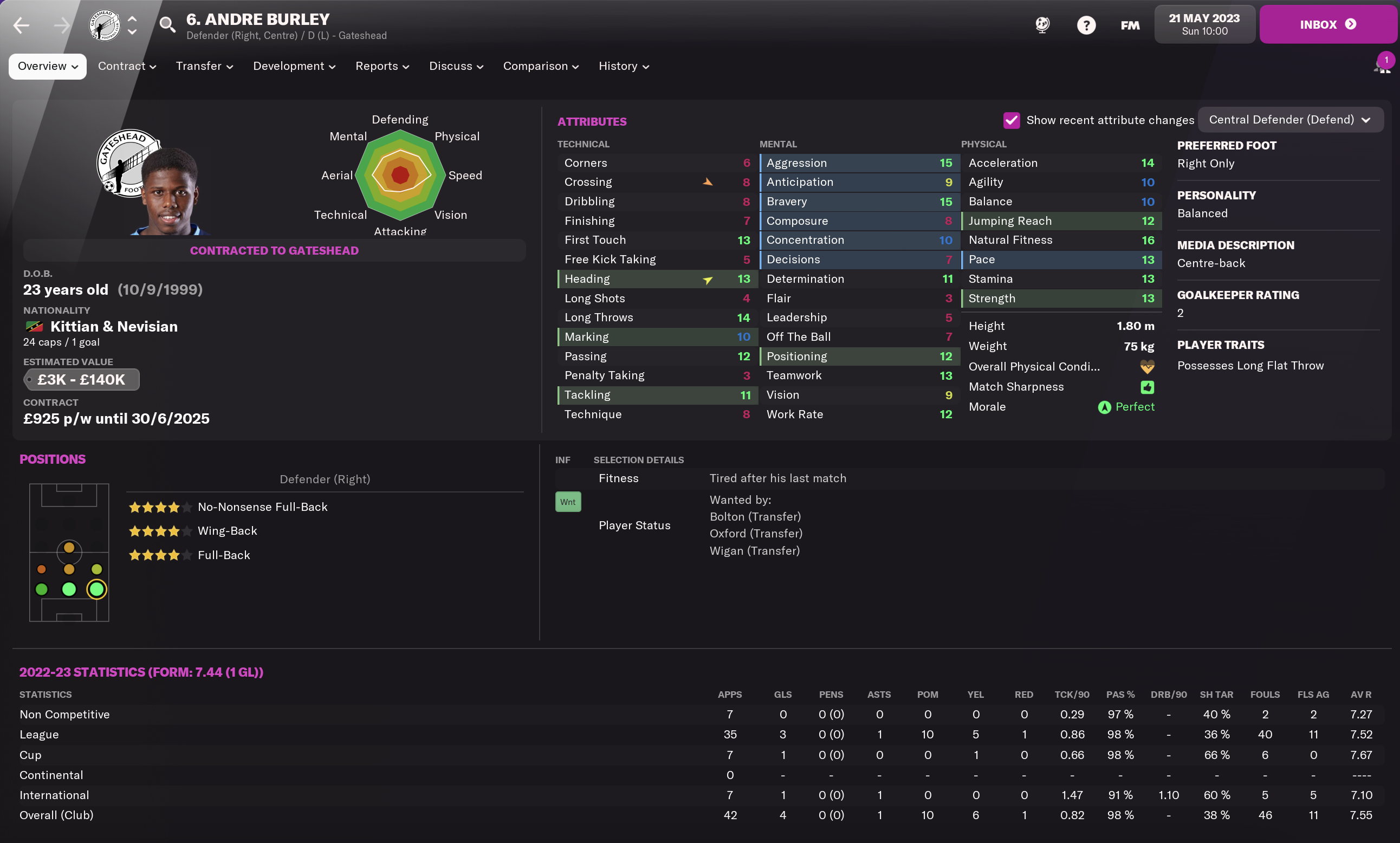 Gateshead’s best player is Callum Johnson, a 26-year-old right-back. He plays as a Wing-Back on Attack.

My Assistant believes he’s got the potential to play at a League One level. He will be with us for many seasons. 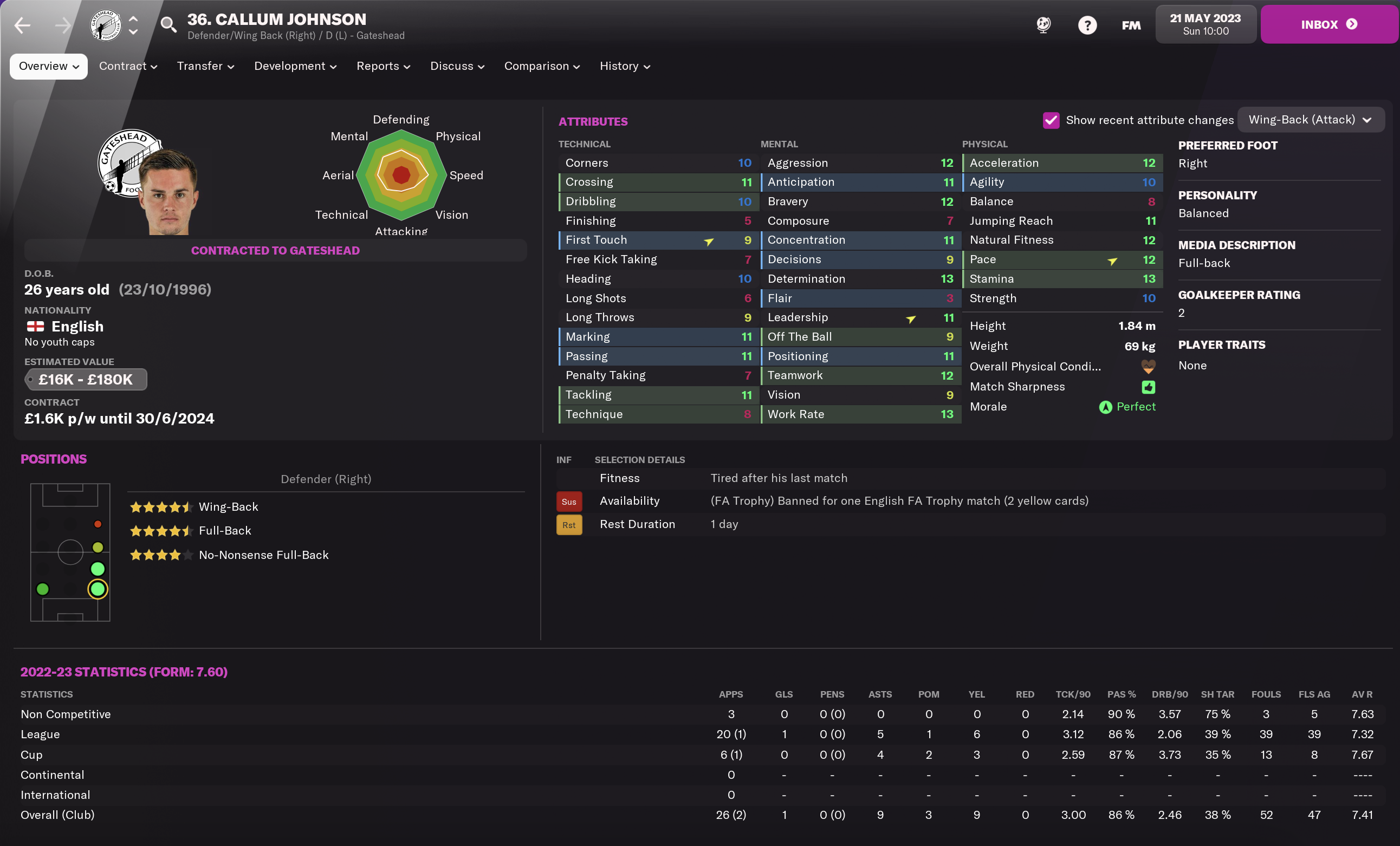 It was not easy, but I managed to signed Matej Kovar, a 23-year-old Czech goalkeeper on a free transfer.

He was released for free by Manchester United.

A leading League Two standard player with a potential to be a good Championship keeper in the near future.

What do you think, will he make it up with us up to the 1st tier? His release clause is set at £14 million. 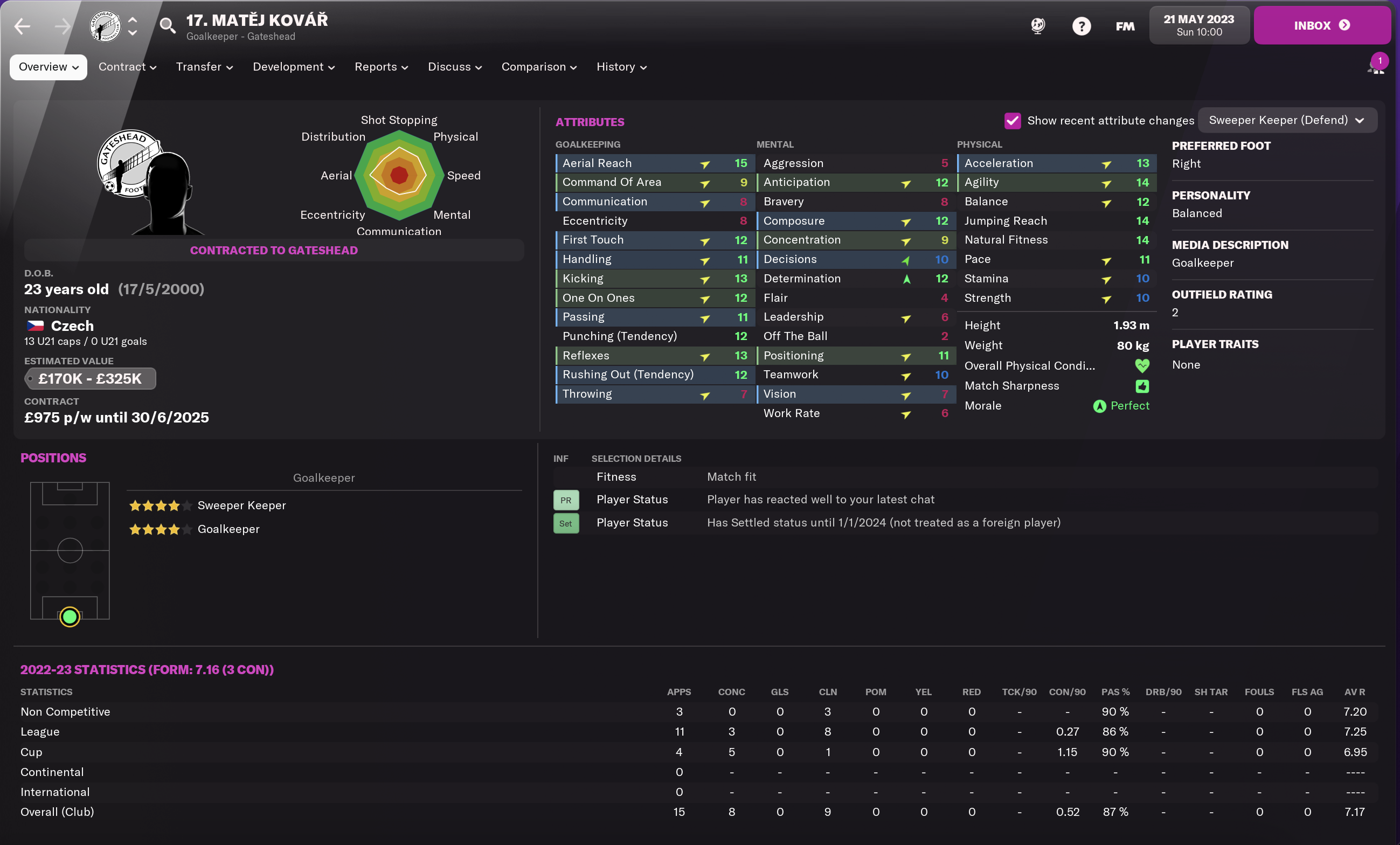 Our best and most promising newgen is Polish midfielder, Piotr Szczepanik. He performs his best as a deep lying playmaker, but he can do a great job as our box to box midfielder. But i won’t lie…..I bought him as I believe I can make a huge profit selling him in one or two more years.

He only cost £62k from Queens Park Rangers. So far he is a good National League player, but he can improve a lot according to my AM. 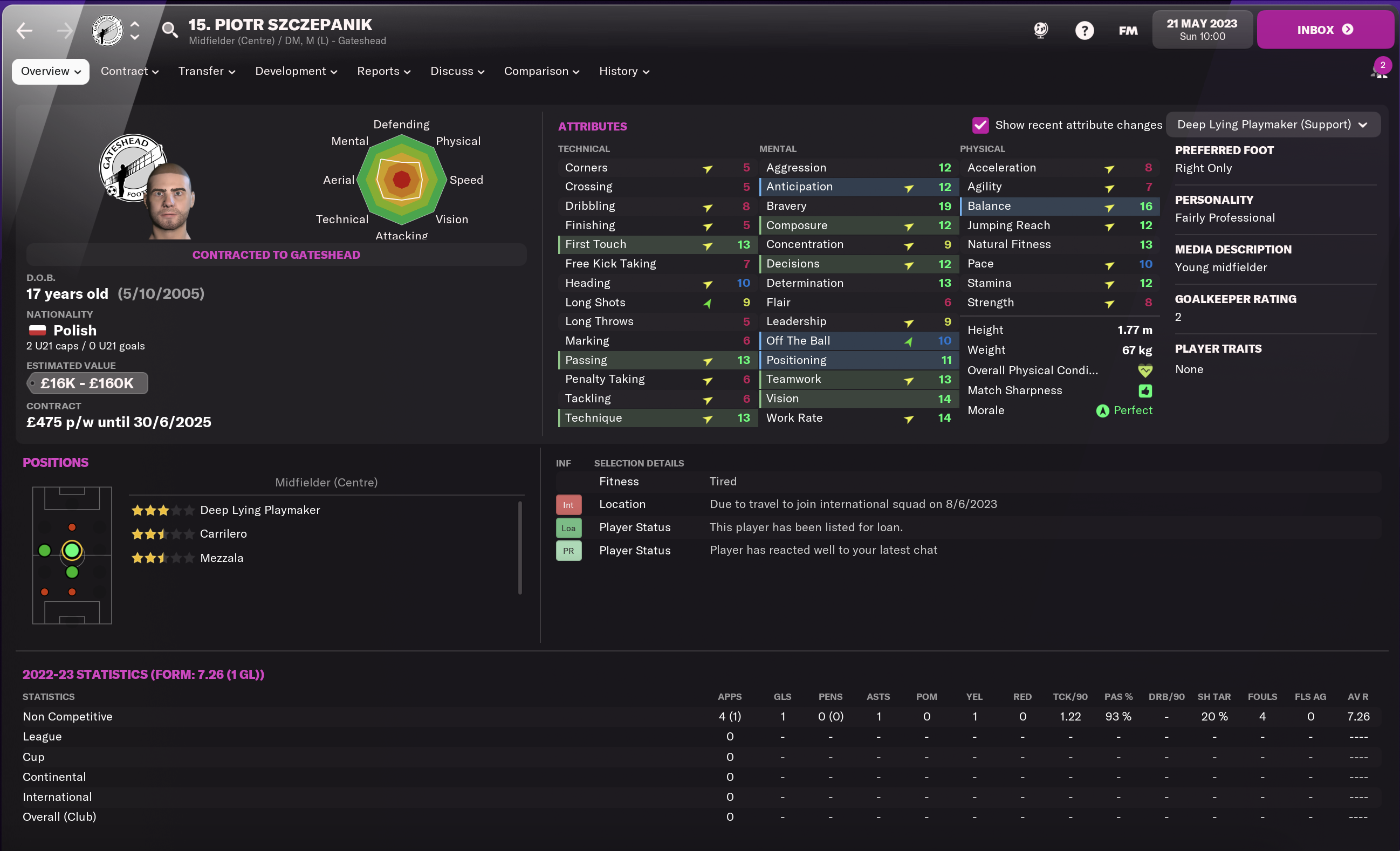 End of the Season

I was very happy that by the end of the season we got a much better squad. This was due by the players I signed and the constant evolution of the many young players we have in our first team or on loans in other squads. At the beginning of the season we were in the 4th position in the odds table(7-2), we finished in 1st place with a 4-6.

My aim next season will be to win the League Two and make it as far as possible in the FA Cup. 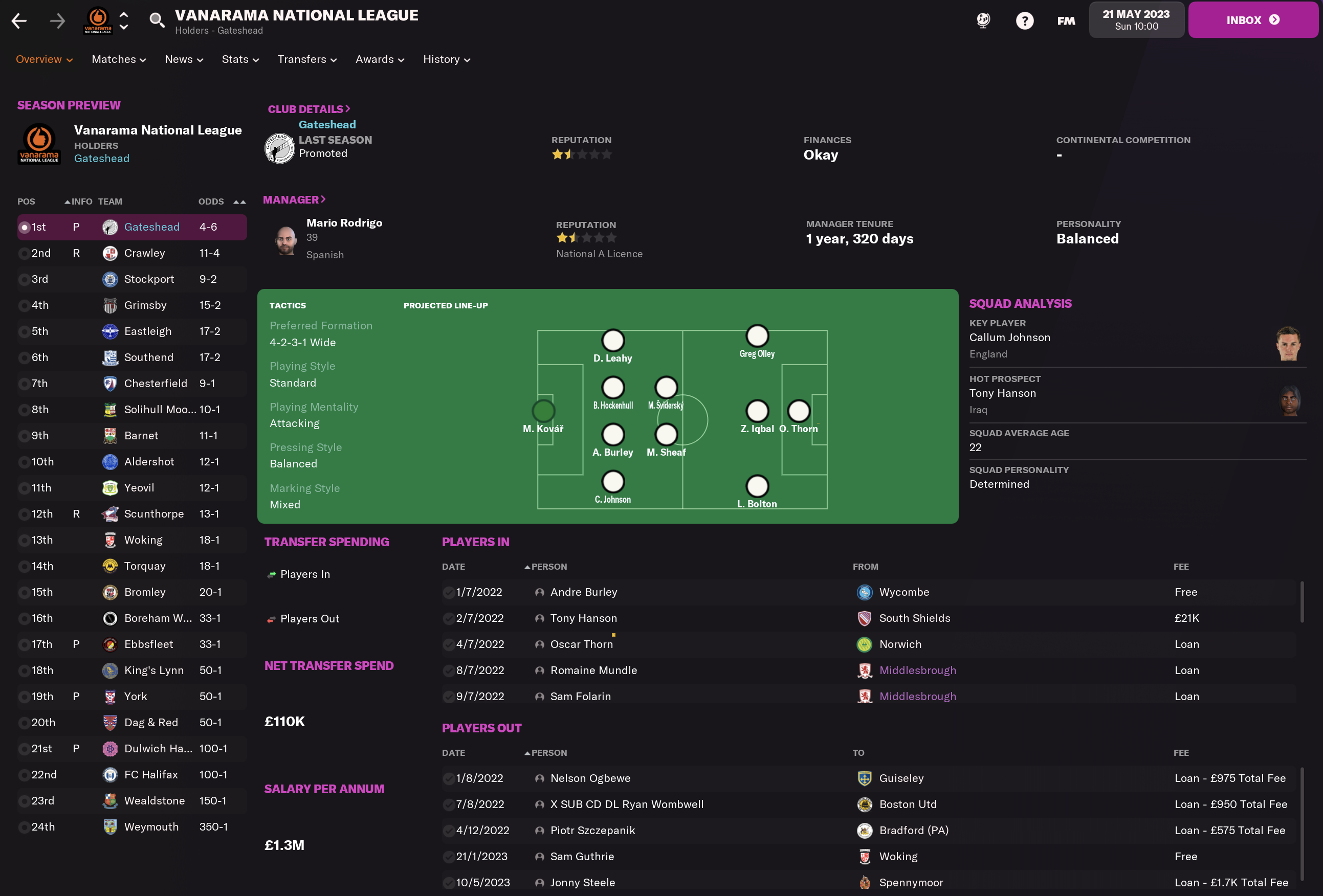 I will never get tired of stating this, you have to get this section ok, if not, it doesn’t matter how much money you have, how good are your players, which tactic or training schedule you use, if this is not ok, you will “struggle” to say the least. 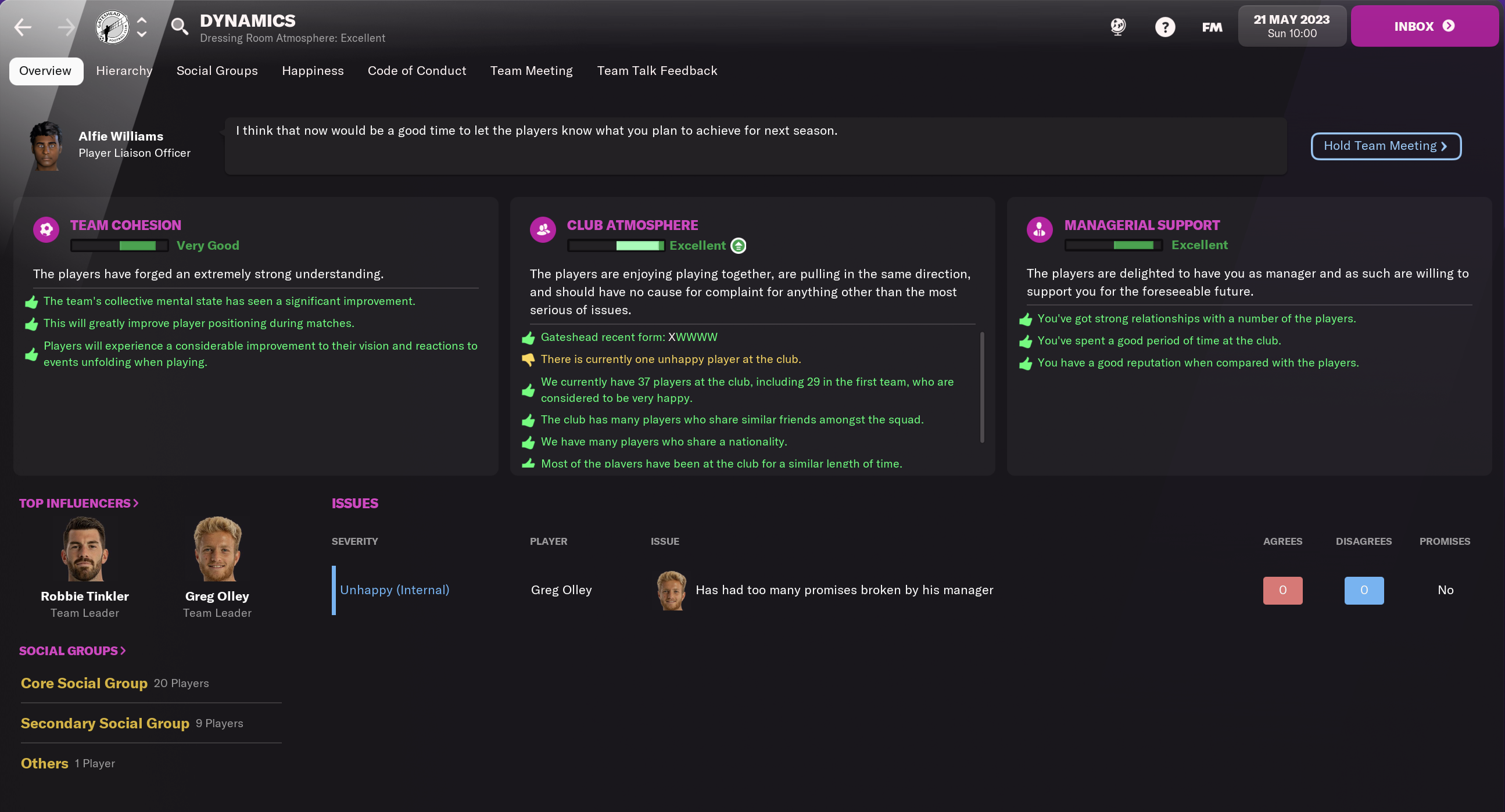 Thanks for joining me on this save and read this post, see you on the next one managing in League Two!