Welcome to my Lower League FM Story – Gateshead to Glory: Season 1. Trying to take Gateshead FC to the top of English football and showing you every step along the way.

If you missed it, please check out the introduction post and what the series is about.

This is the report of my first year managing the team in the Vanarama National League North, the FA Cup and the FA Trophy.

At the beginning of the season the media predicted that we were going to finished in 11th position. 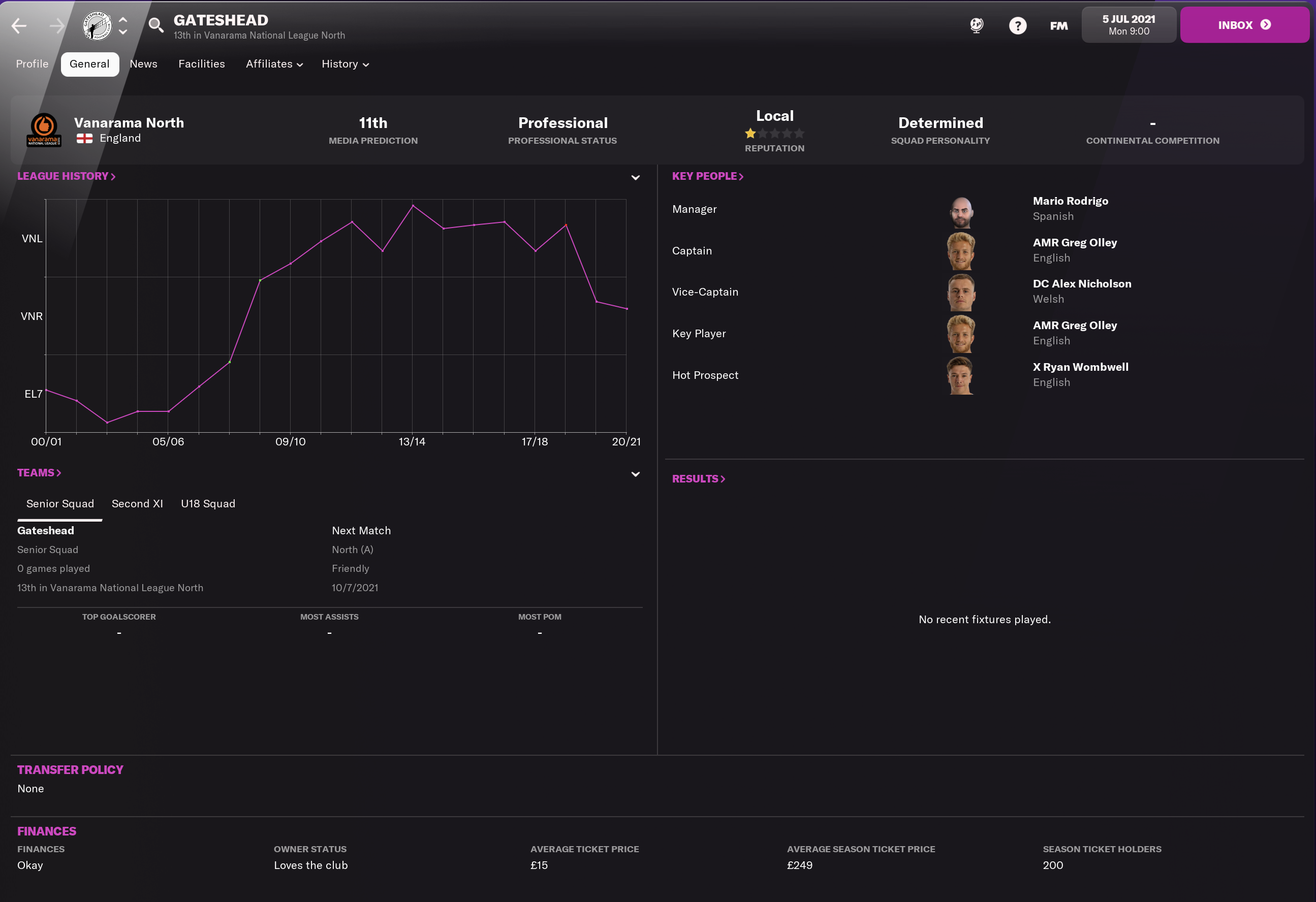 But the odds were a bit more optimistic than the media, placing us at 7th place with odds to win the league at 10/1. 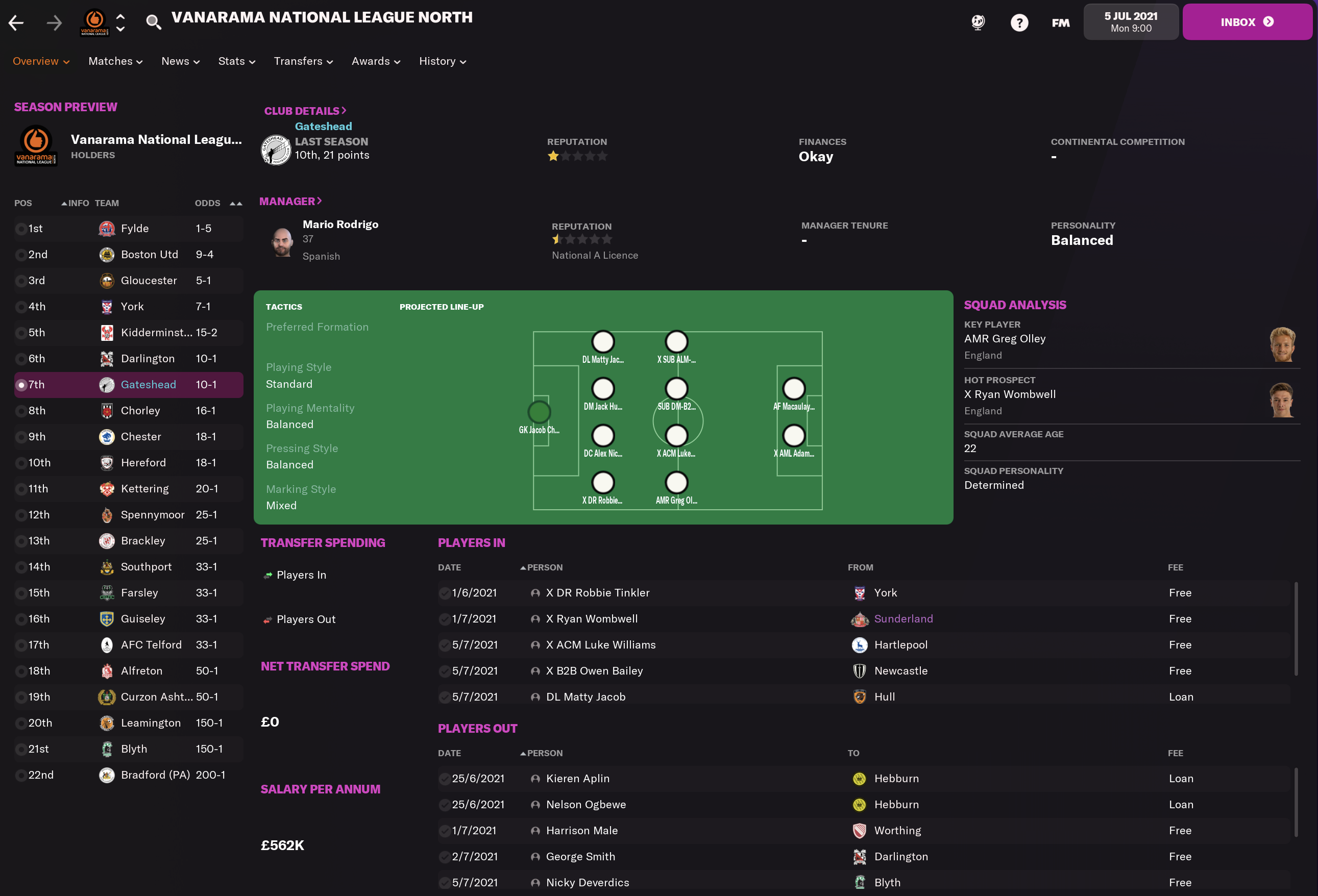 The board expected me to qualify for the promotion play-offs and to reach the 1st round in the FA Cup and the 2nd in the FA Trophy Cup. 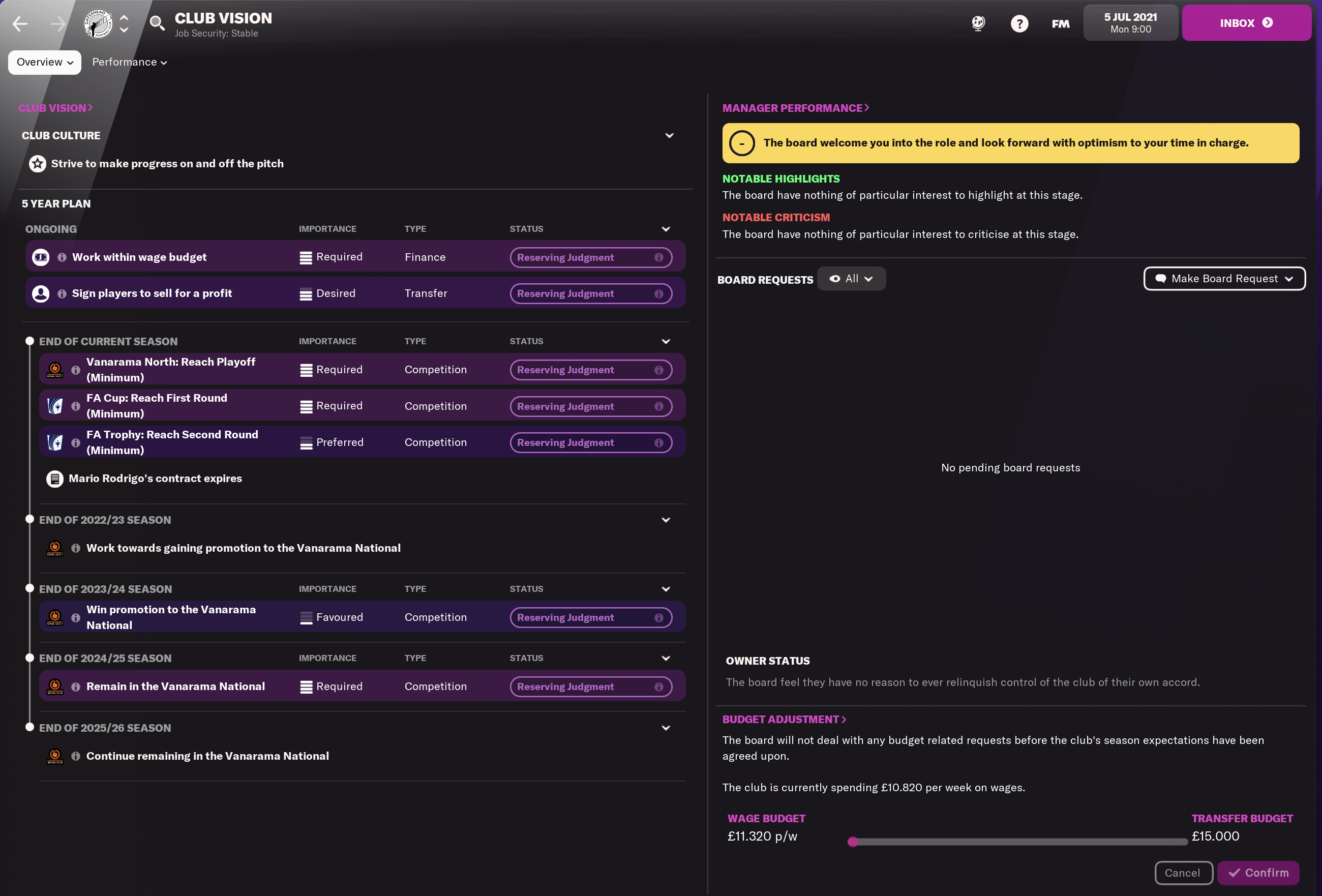 One of the first jobs was to revamp the coaching staff, this is how it looked before the season started. 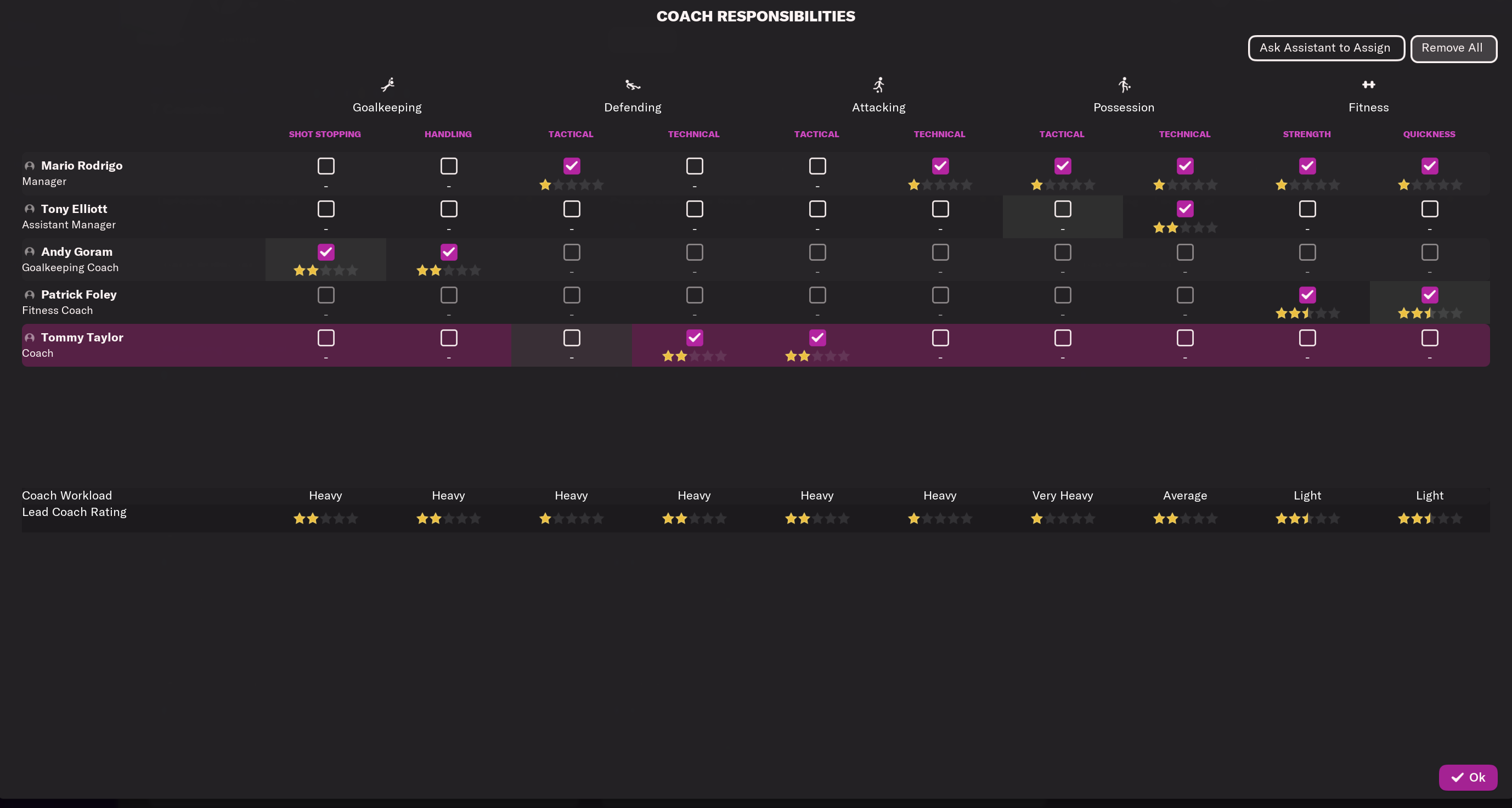 As I already explained in the story’s introduction post, I am using my own 4-2-3-1 tactic. 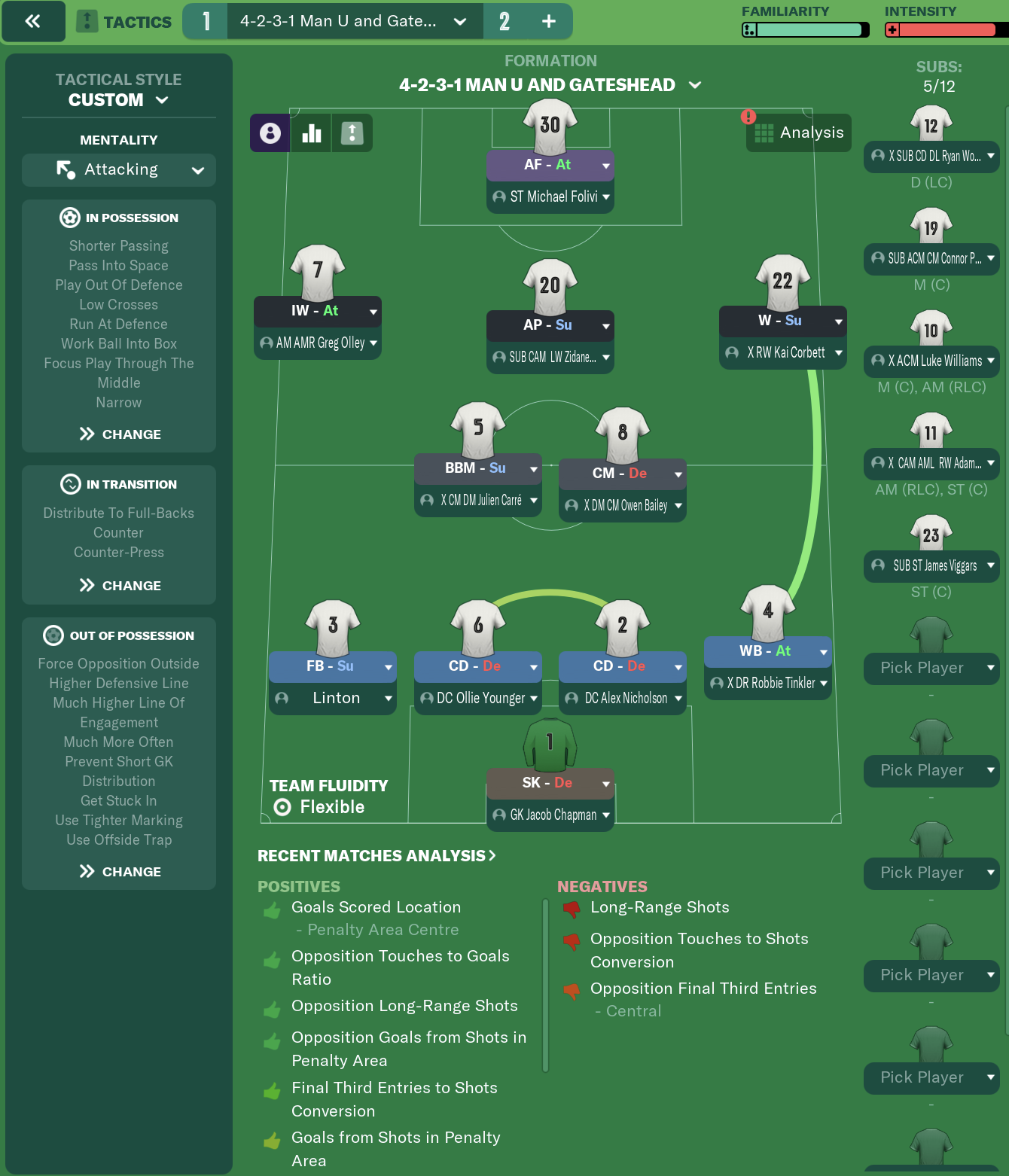 The previous manager brought in 5 players on a free transfer, plus one on loan from our senior affiliate, Sunderland.

Before the league kicked off, I managed to sign two more players for free and brought two in on loan.

During the season I bought six players. Three of them on loan deals, a striker on a free transfer and my first two newgens in this save.

I also got rid of ix players who were either sold, sent on loan or released for free to increase a bit the club’s budget to bring new life to the squad. 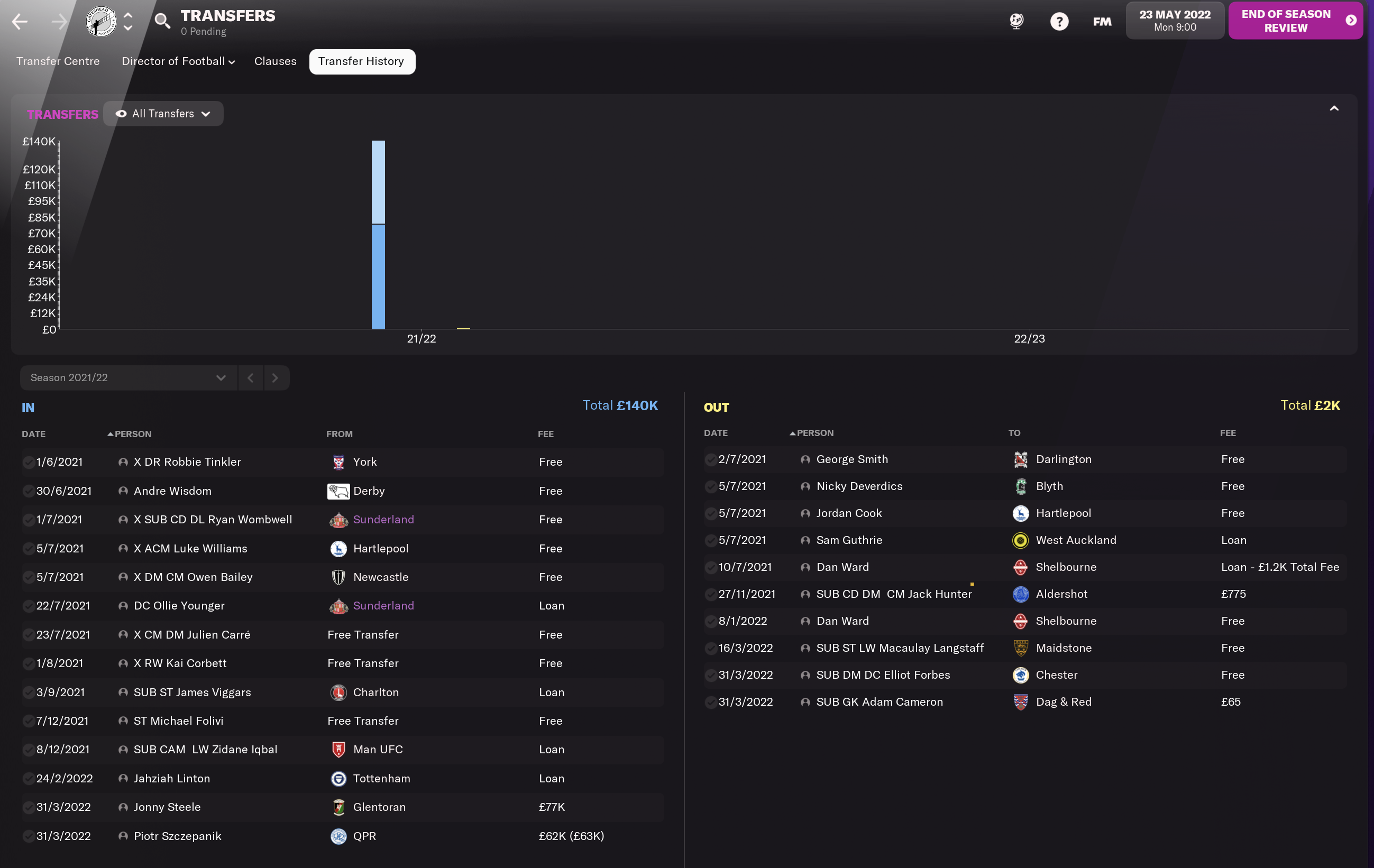 Now I will introduce you to the first XI and the more relevant subs.

The sweeper goalkeeper Jacob Chapman, an Australian player we brought on loan from Huddersfield. He played in 41 league games with a decent average rating of 7.09. 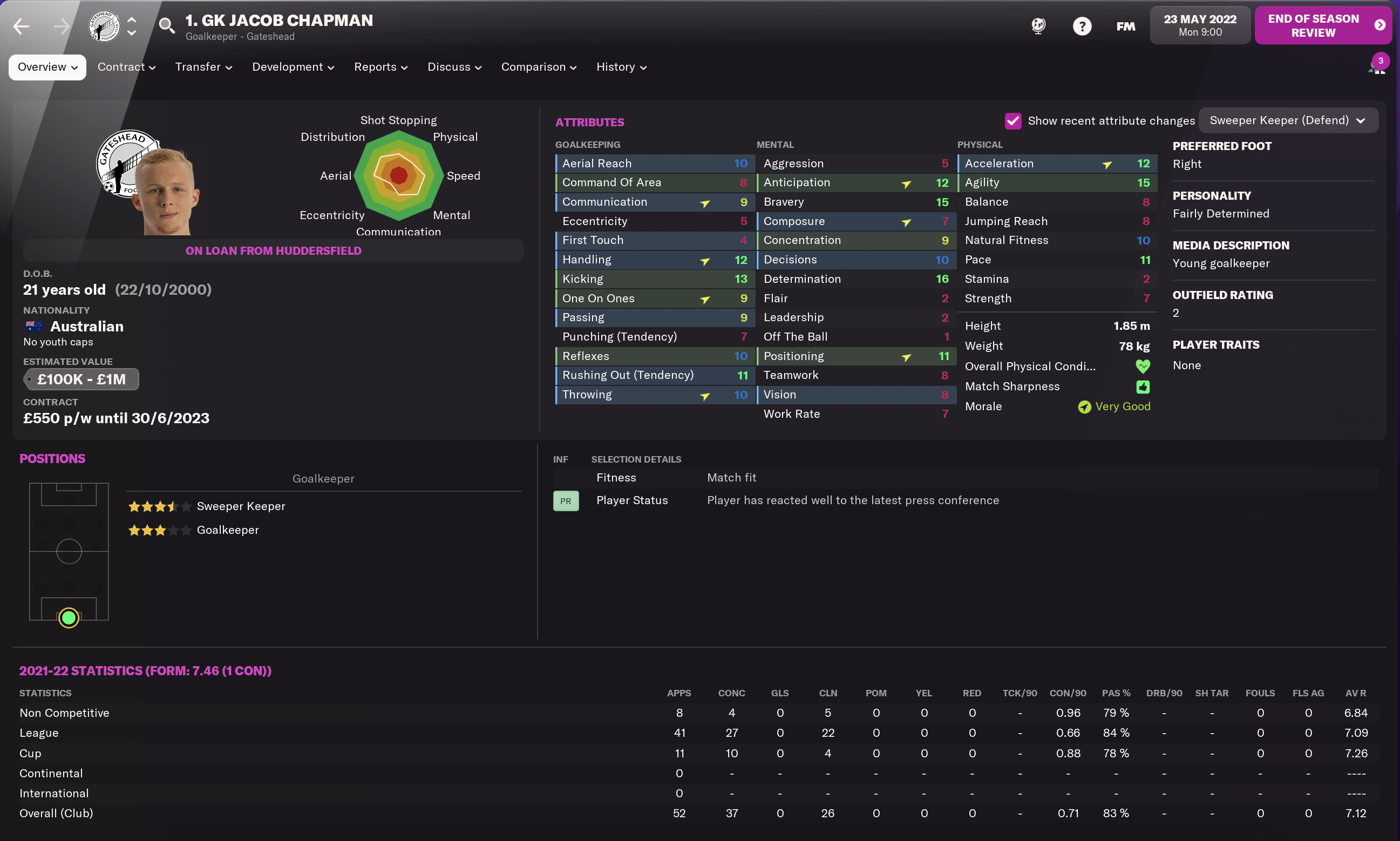 The right wing back on an attack duty, Robbie Tinkler, signed from York. He scored 6 goals and made 6 assists, obtaining a great 7.49 average rating in the league. 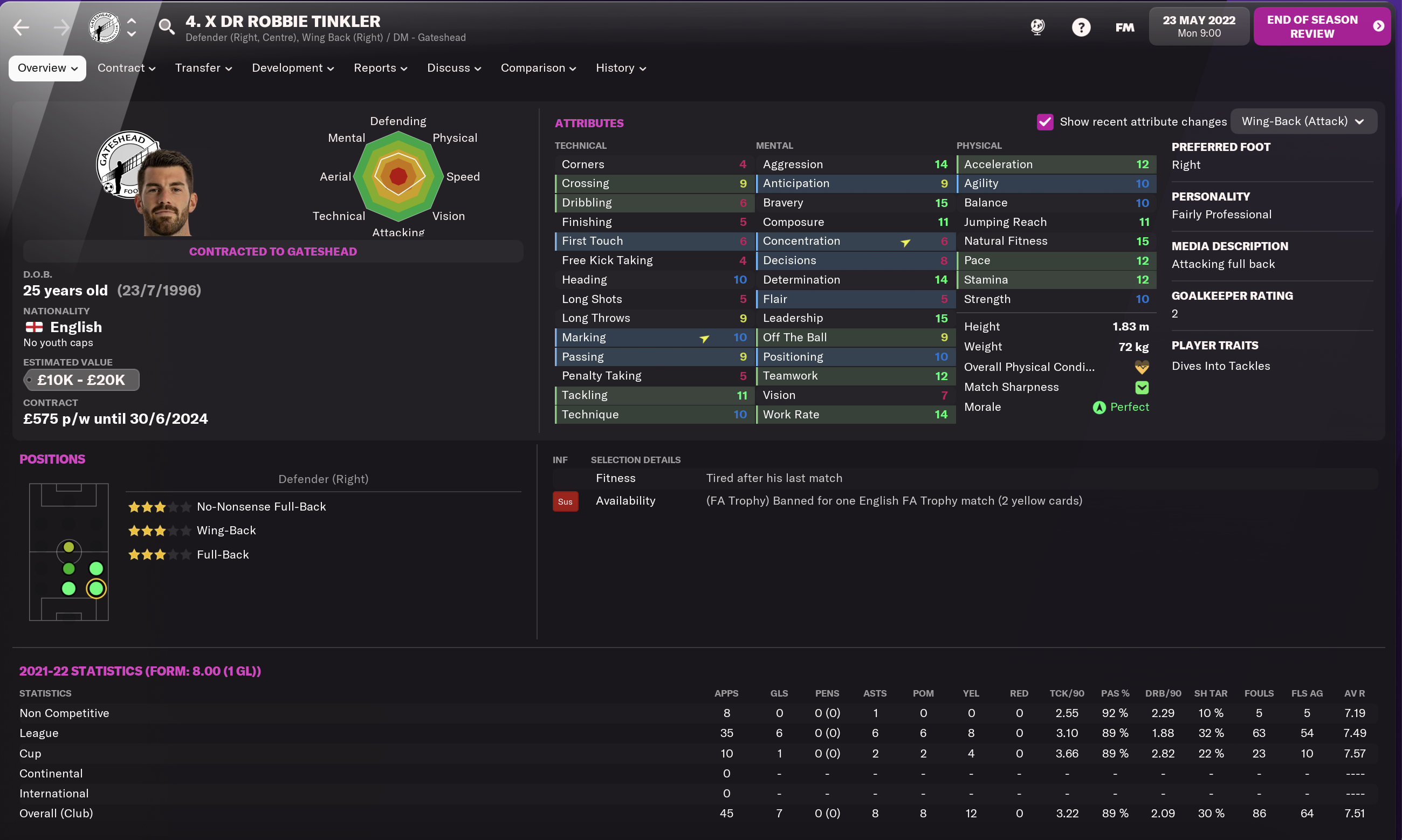 At left-back, we played Jahziah Linton, a 17 year old brought on loan from Tottenham who will be playing with us next season too. He had a good average rating of 7.11. 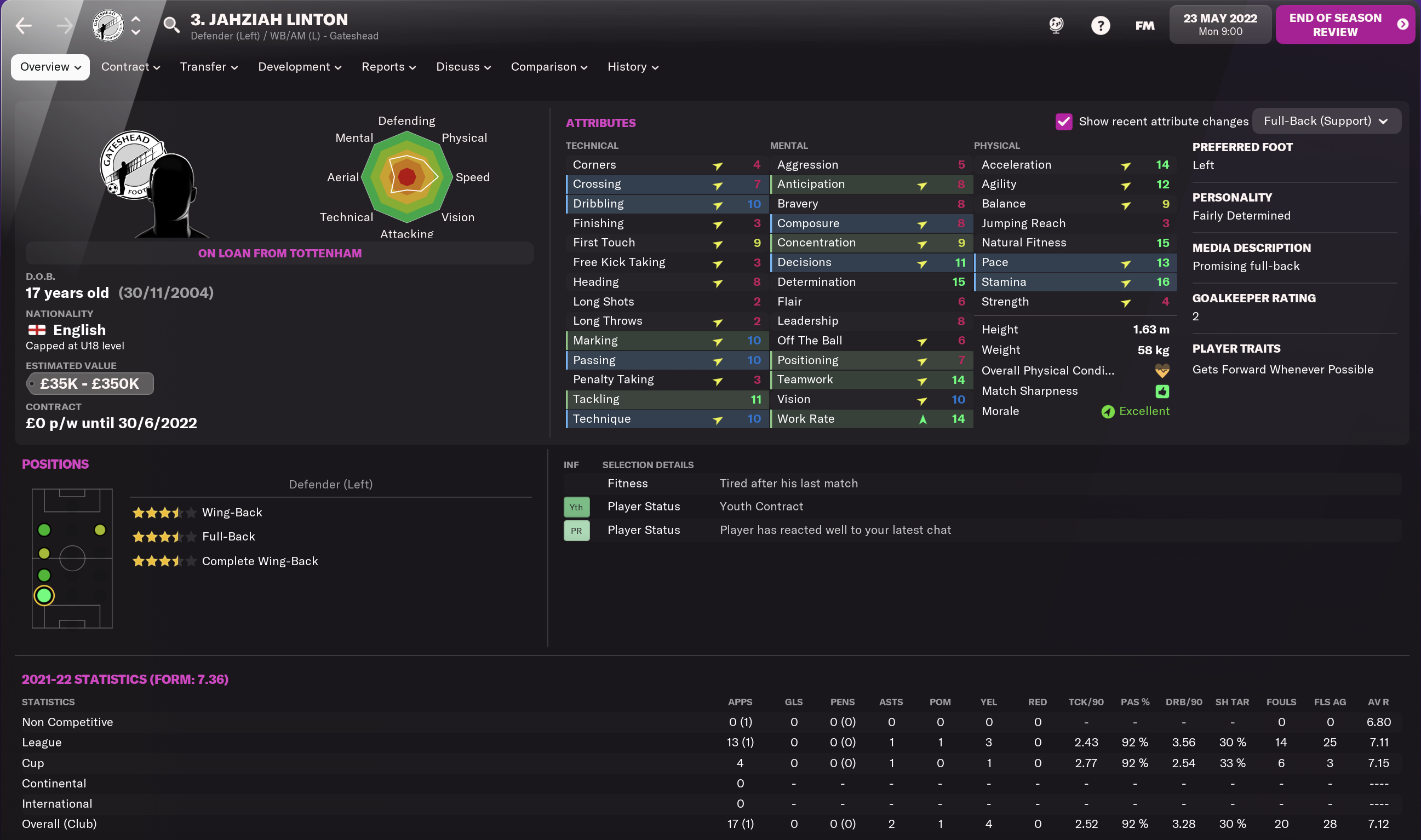 Welshman Alex Nicholson was our right Centre Back. He did great, scoring six league goals. 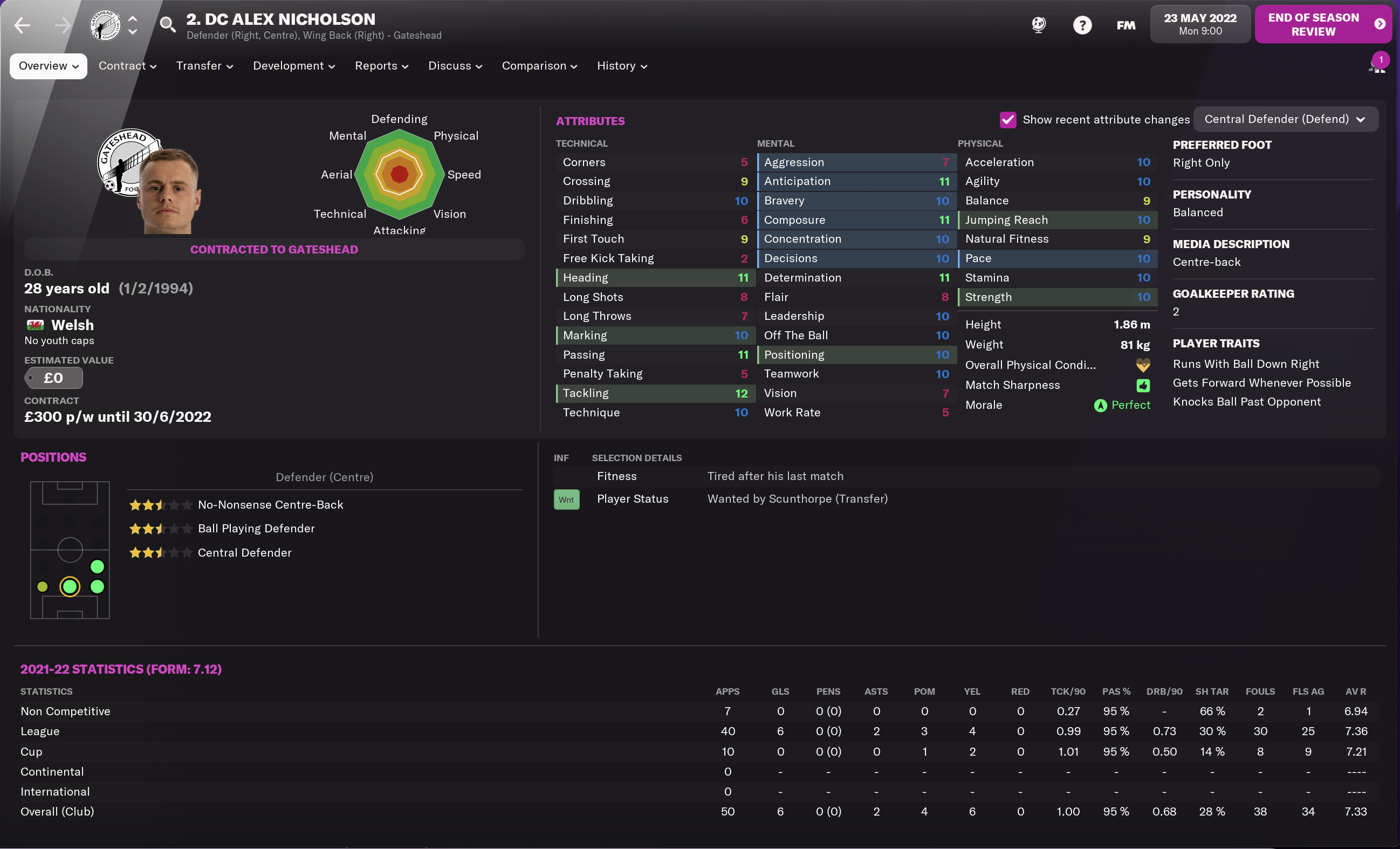 The other centre back was Ollie Younger, the first player I ever brought to the club, on loan from Sunderland. With outstanding mental attributes, he did great, 7.35 average rating plus six league goals. 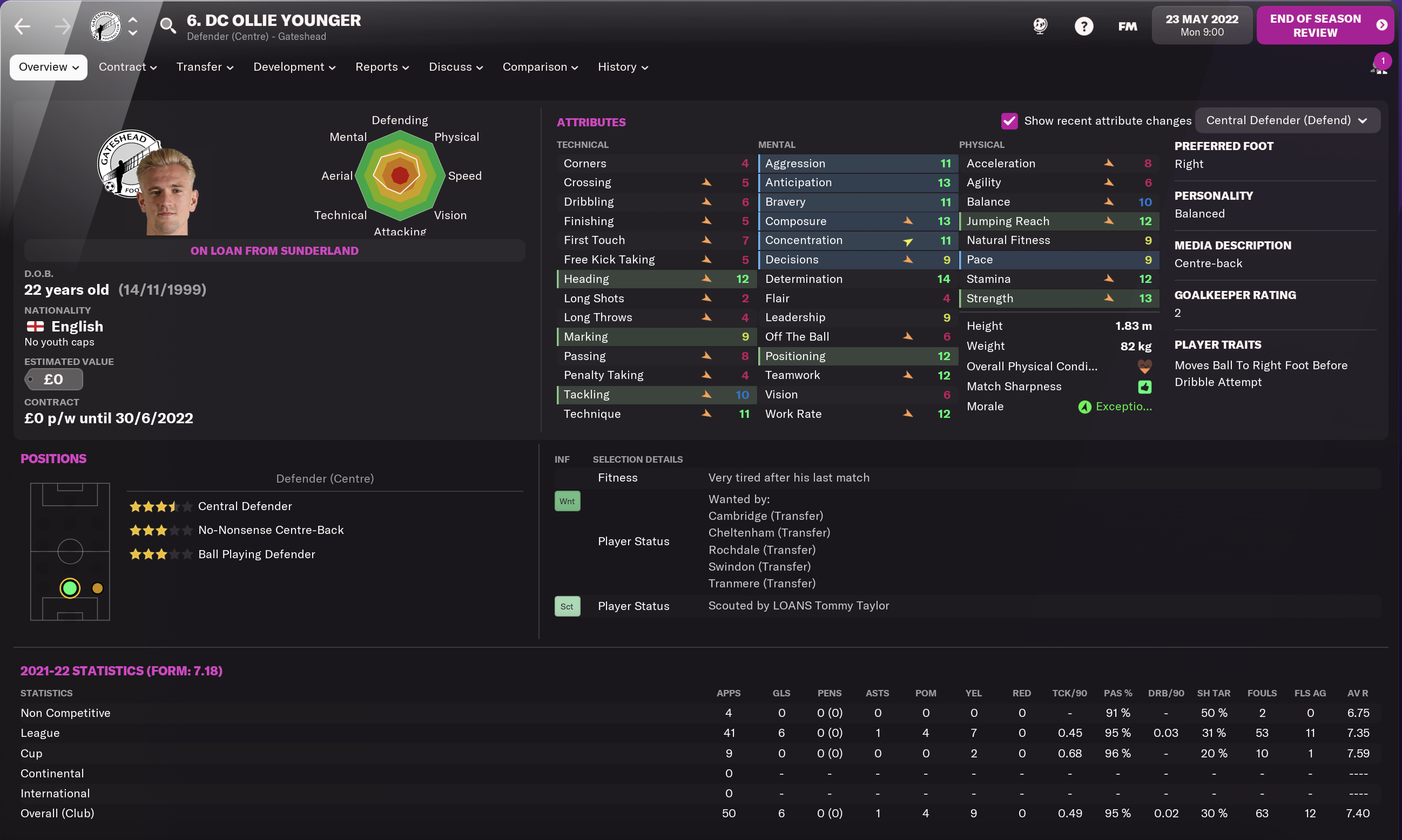 Our central midfielder on a defend duty was Owen Bailey, a player I signed on a free transfer from the Newcastle United academy. 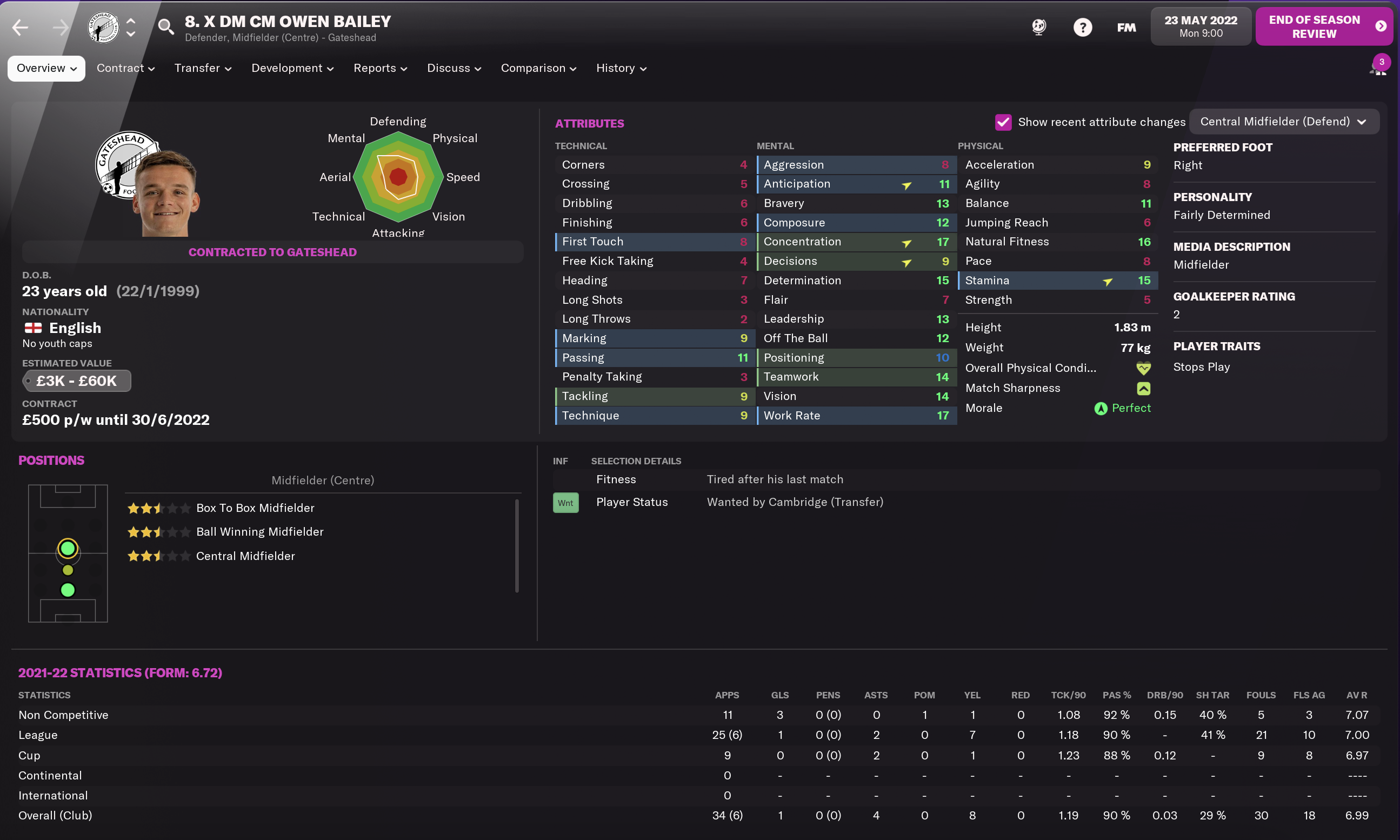 Before the start of the season, I was lucky to bring this French youngster, 20-year old Julien Carre, he did a great job as the team’s box to box midfielder. I expect he will stay with as for several seasons as he still got lots of room to develop. 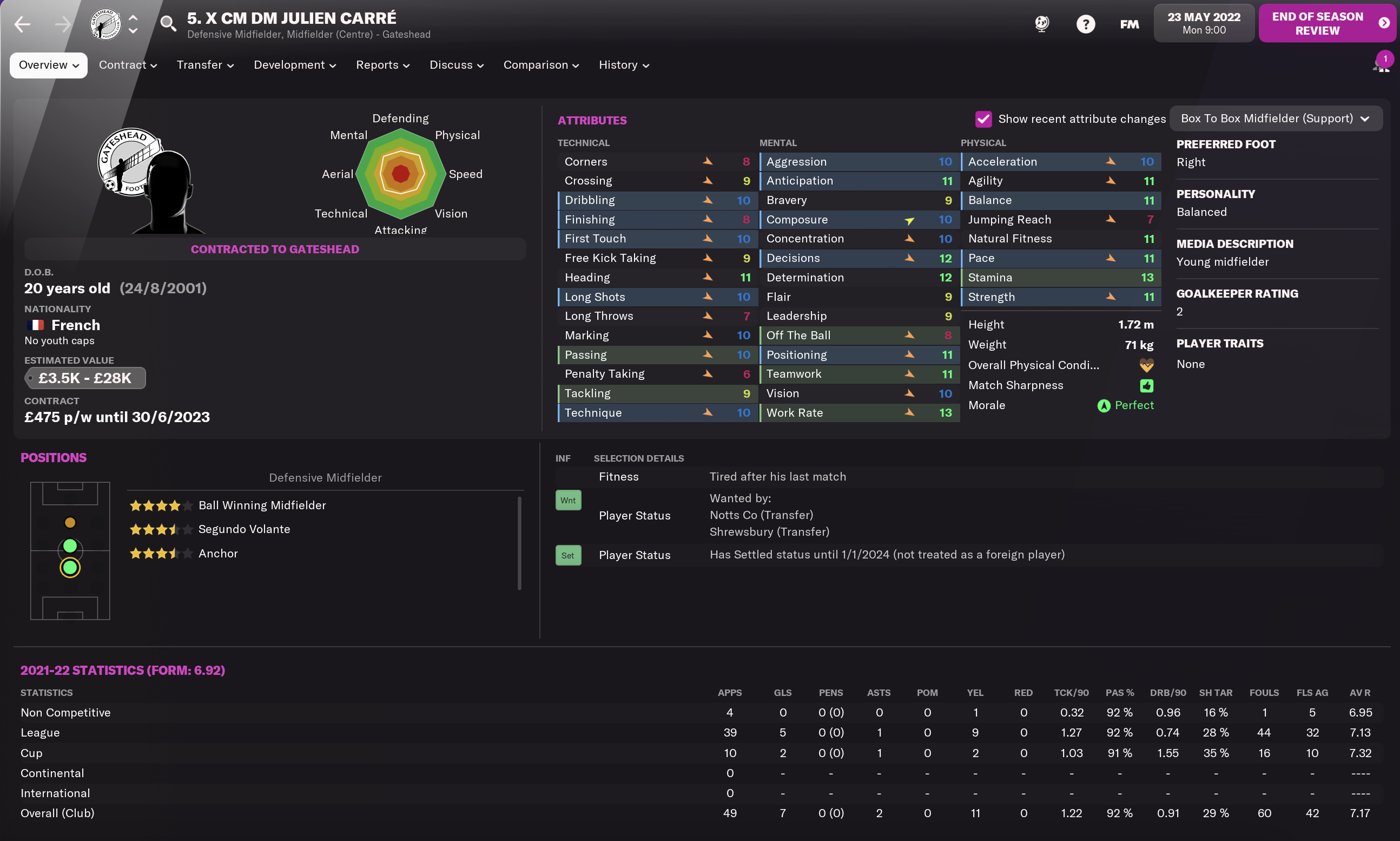 During the season I loaned in one of our best players, Iraqui Zidane Iqbal from Manchester United. Pay attention to these technical attributes, very high for this tier. He will be with as next season too, and of course, I hope I can sign him on a permanent basis. 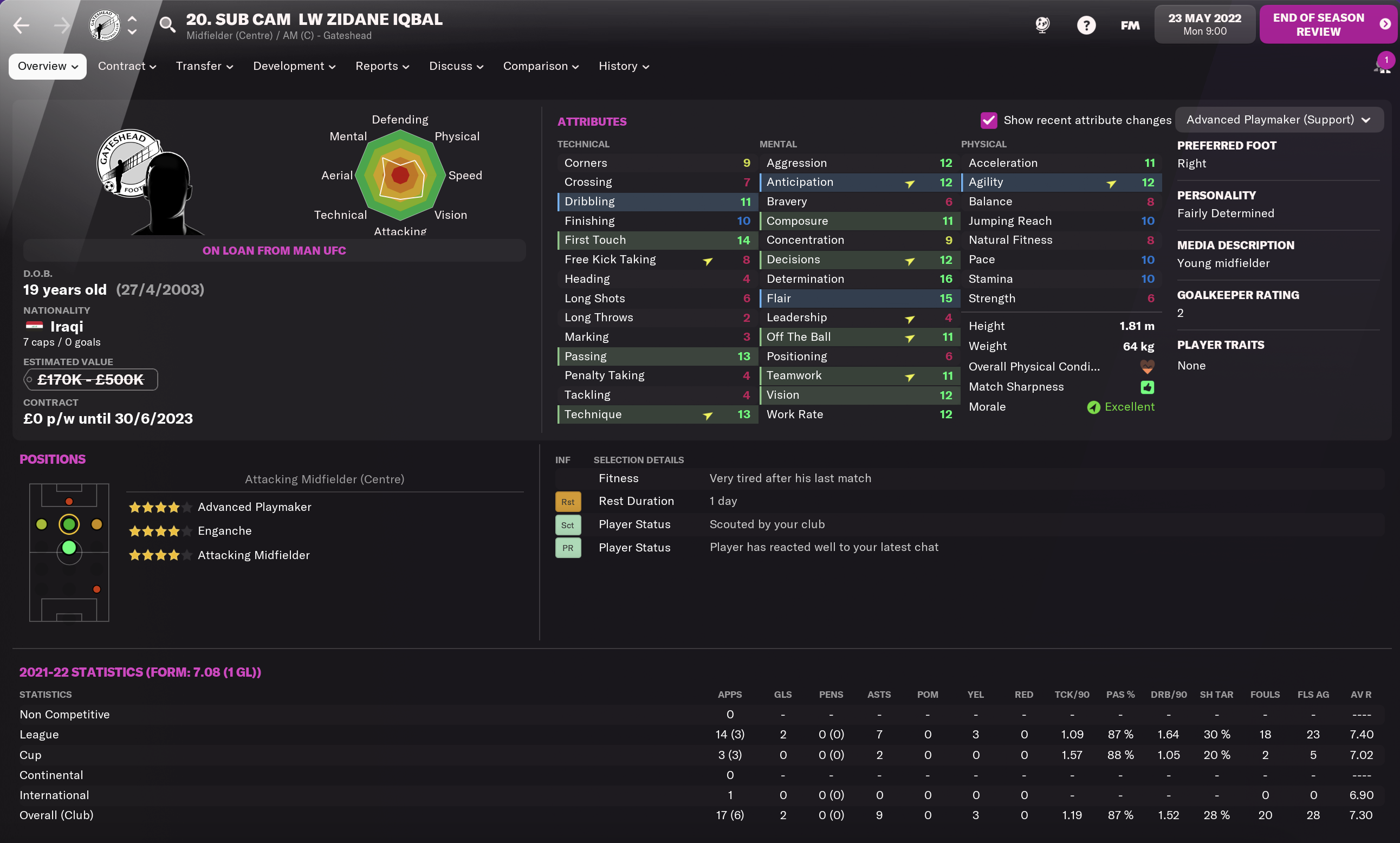 Kai Corbett, a free signing and ex-West Ham youngster played on the right wing with a support duty. He scored 11 goals with 10 assists. 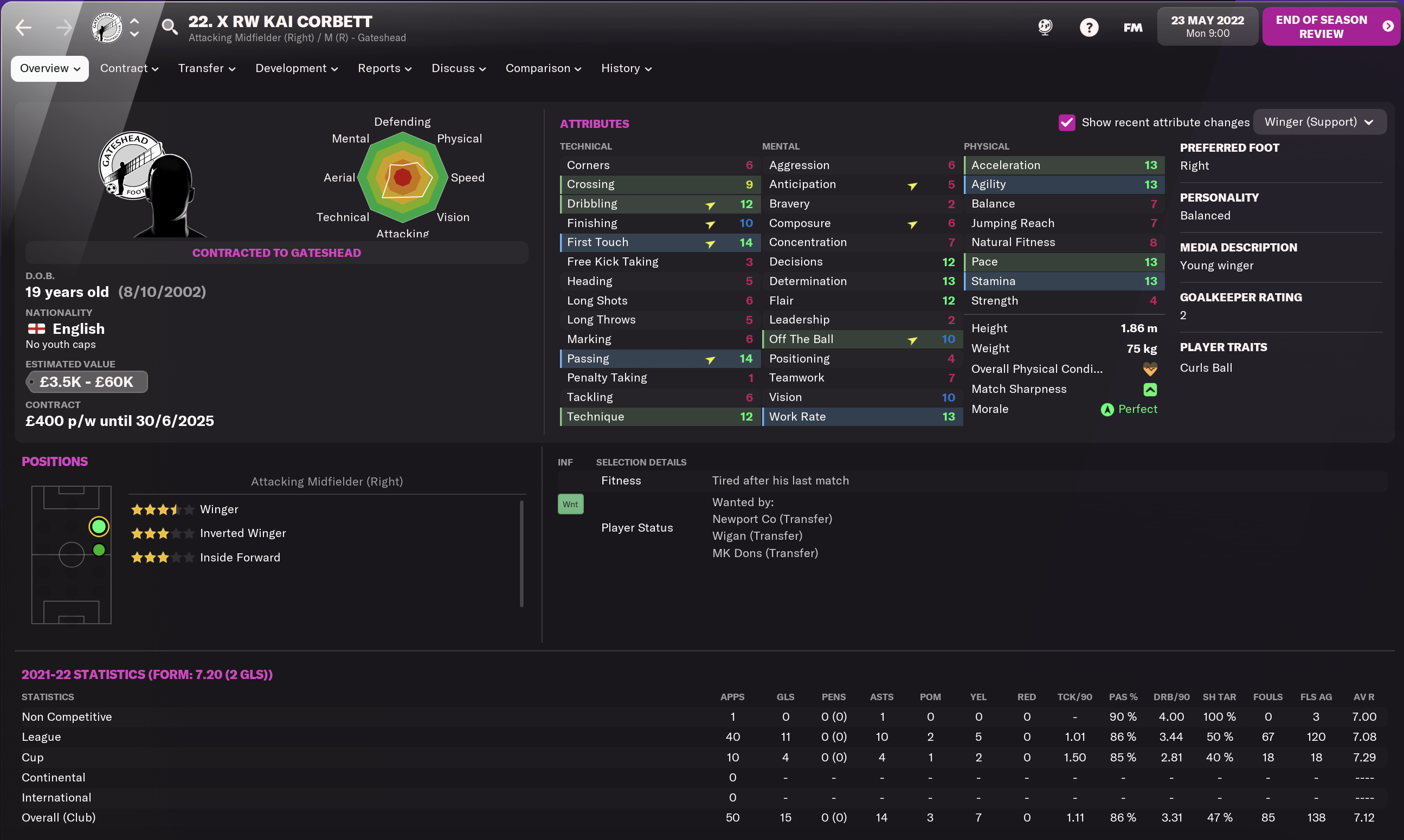 On the opposite flank, playing as an Inverted Winger on Attack, Luke Williams, one of the previous manager’s signings, scored 17 goals and produced the same number of assists, earning an amazing 7.71 average rating. 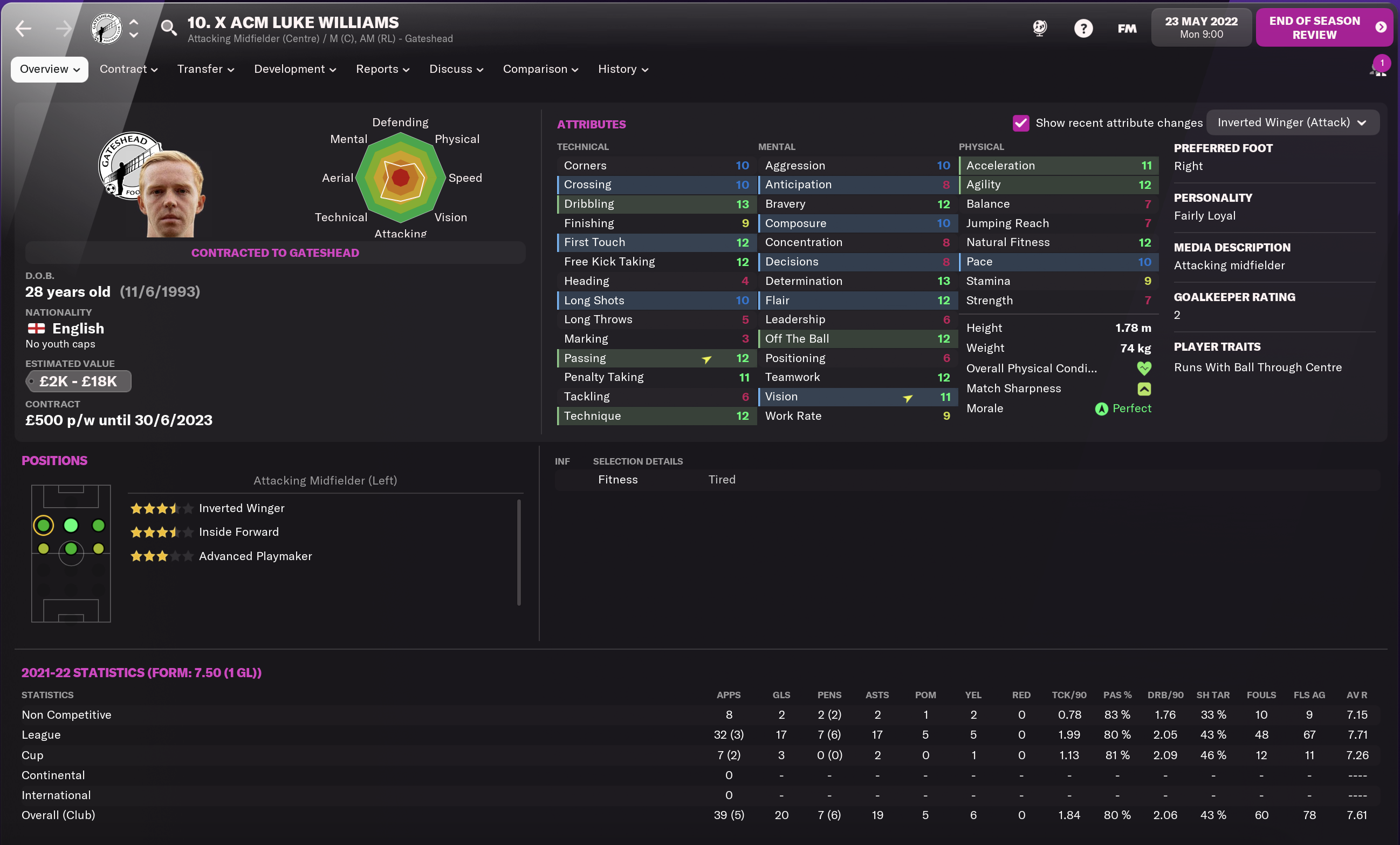 And our striker, from Ghana, Michael Folivi. He scored 26 goals in 21 league games as he was a late signing in December. 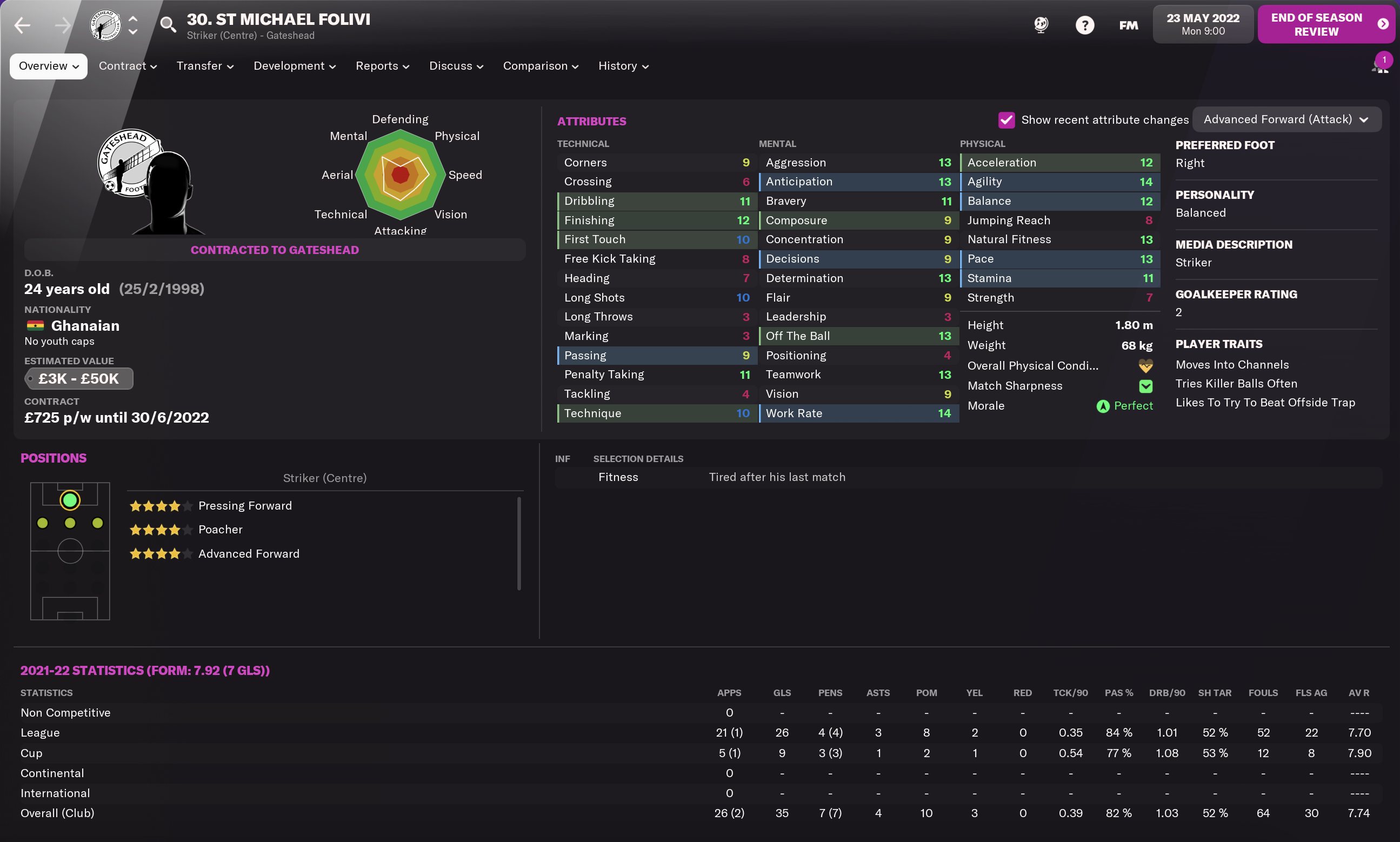 The board expected me to reach the FA Cup first round, after eliminating 3 teams, we achieve our goal, but we ended up losing 3-1 to Grimsby Town. They finished second in the National League, it was a tight match despite them being much the better side.

I admit I was aiming for more, specially as the FA Cup matches bring lot of money from the game tickets. 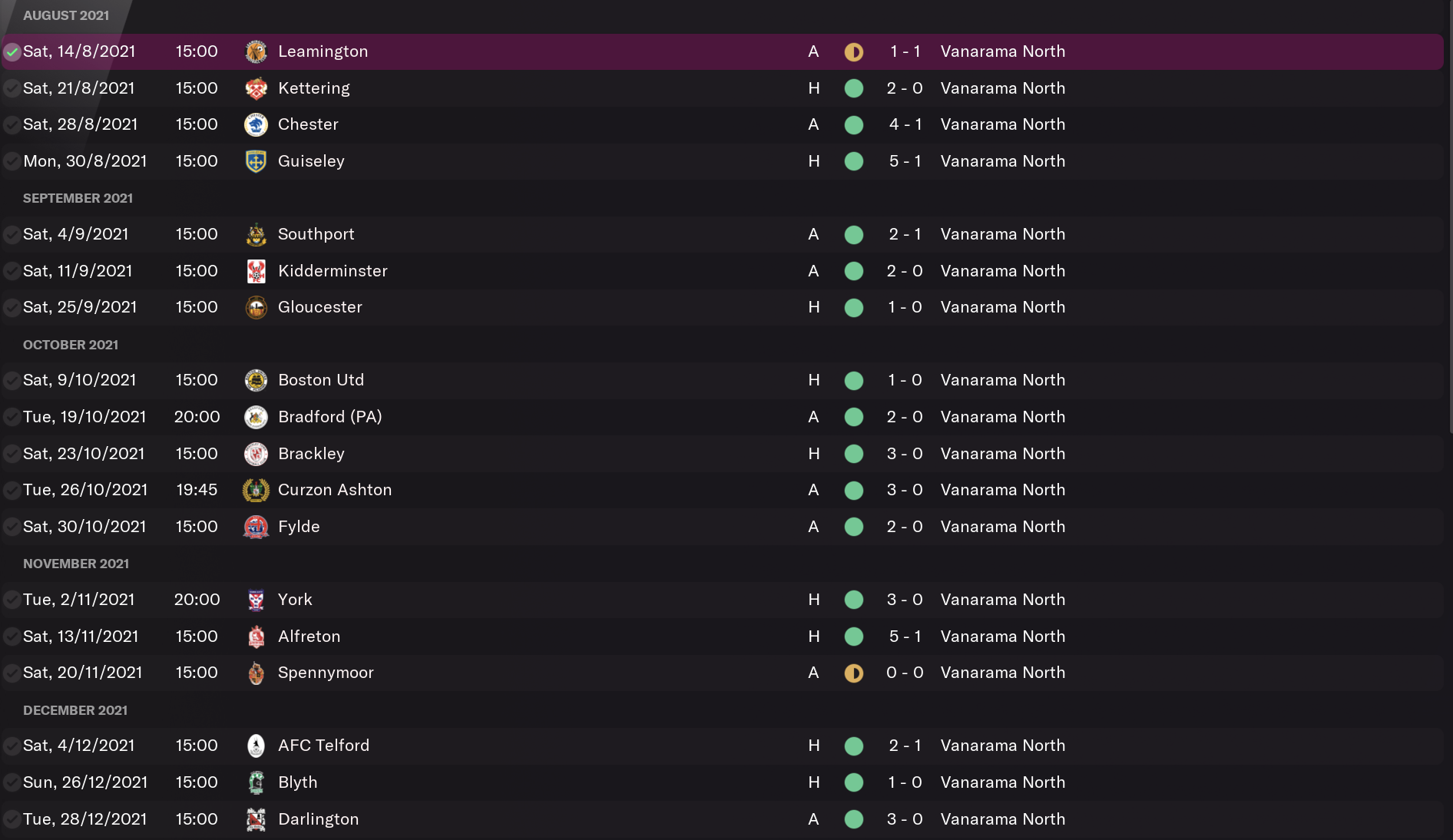 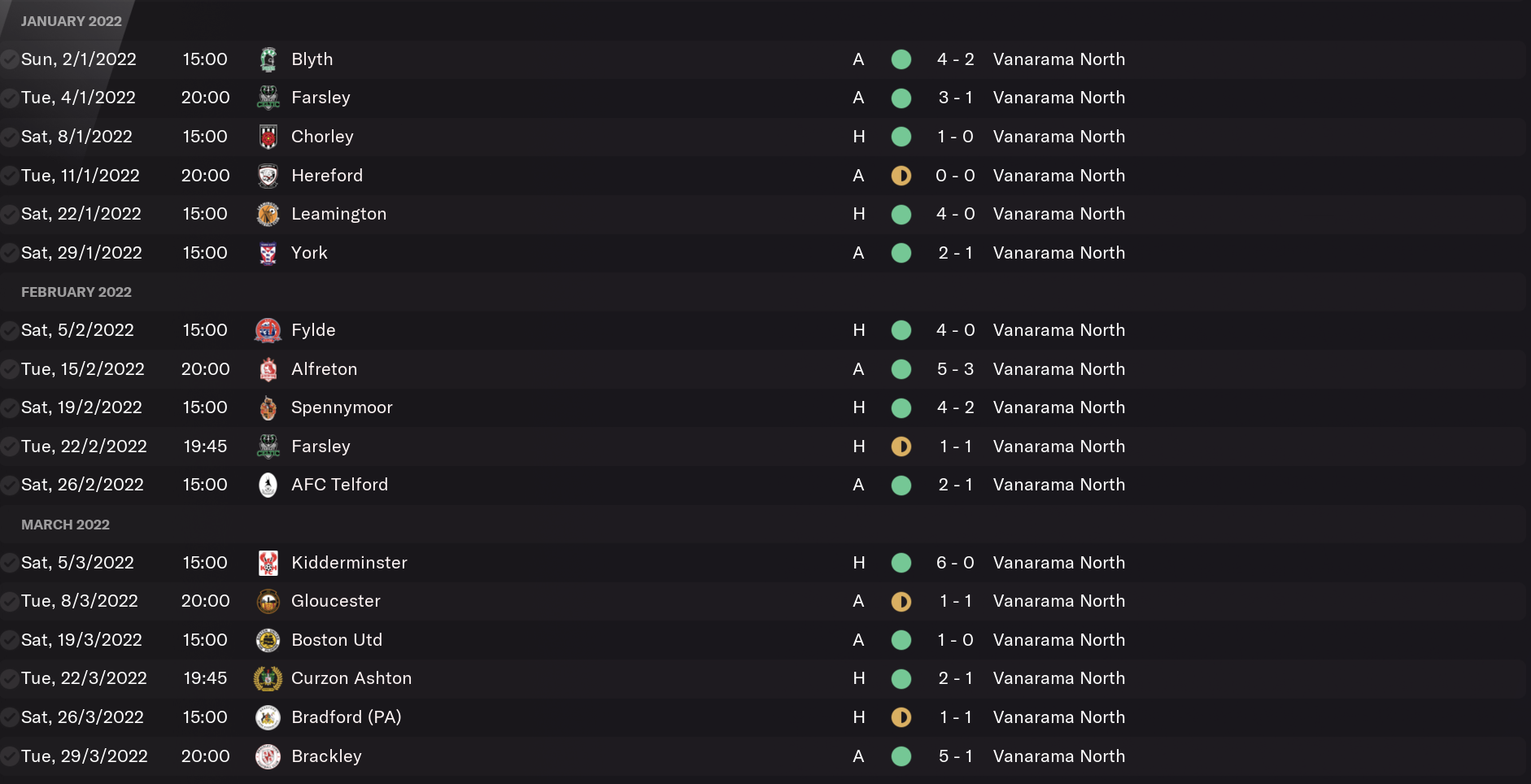 I am very happy with the league results, we finished top and finished the season unbeaten with 112 points and a goal difference of 82. Looks like my 4-2-3-1 tactic is working in the lower leagues too. :)

I must admit this was unexpected, the board was asking to make it to the 2nd round, but we did great, well above expectations… Yes! We won the cup defeating Yeovil Town in the final on penalties.

This is an important milestone for me as a CM/FM manager, I don’t remember winning this trophy while managing a Vanarama League North/South team.

Plus we got revenge on Grimsby, knocking them out 3-2 in the Quarter-Finals. 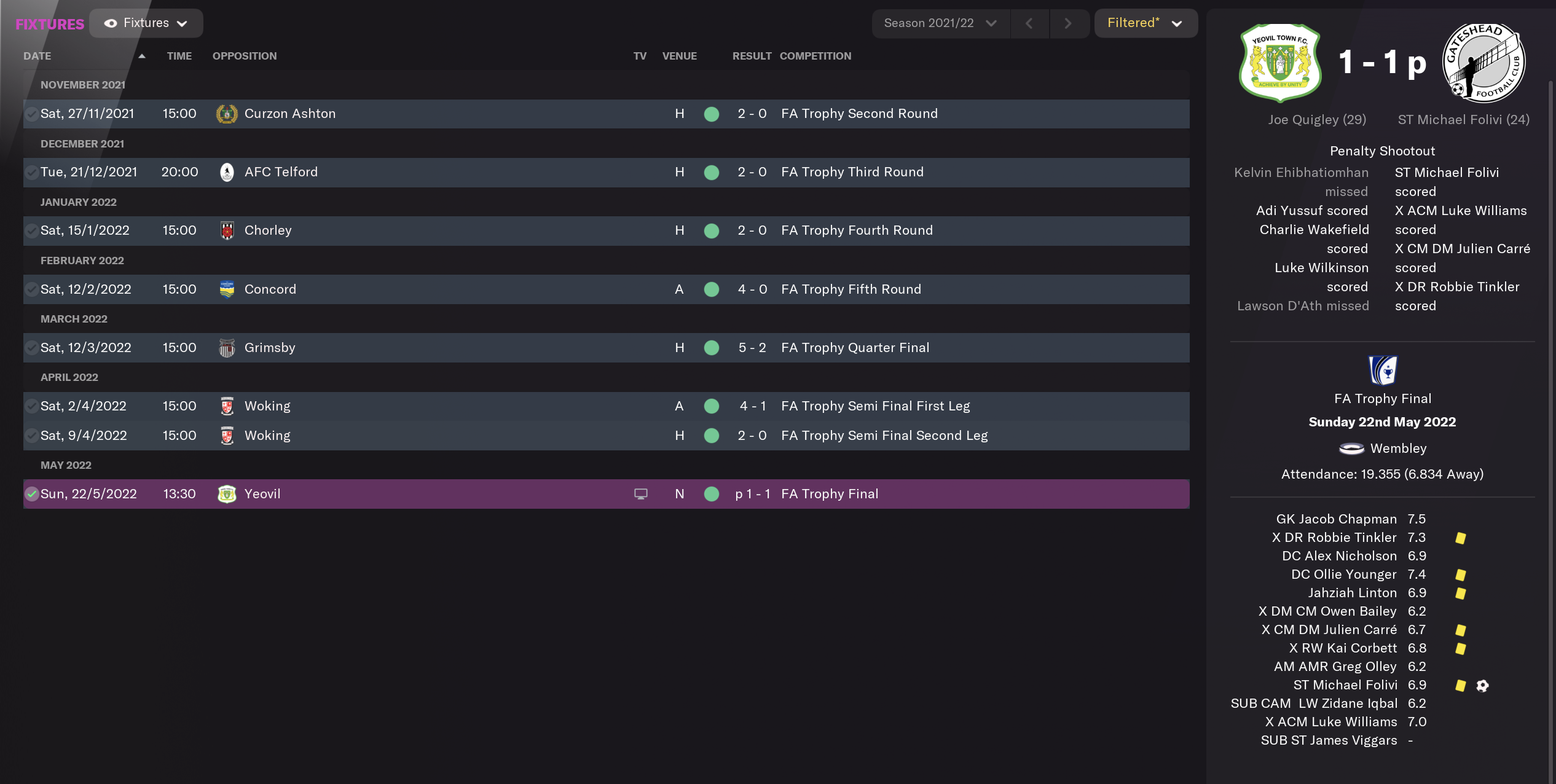 This is something very important to have it right if you want to perform well above the expectations.

Look, I have no unhappy players, and I enjoy of the full support of my players. I also put in the work to reach a good team cohesion and club atmosphere.

But during the season the previous manager and myself brought in too many players, which is best to be avoided, but needed if you want to improve your team in a short period of time. 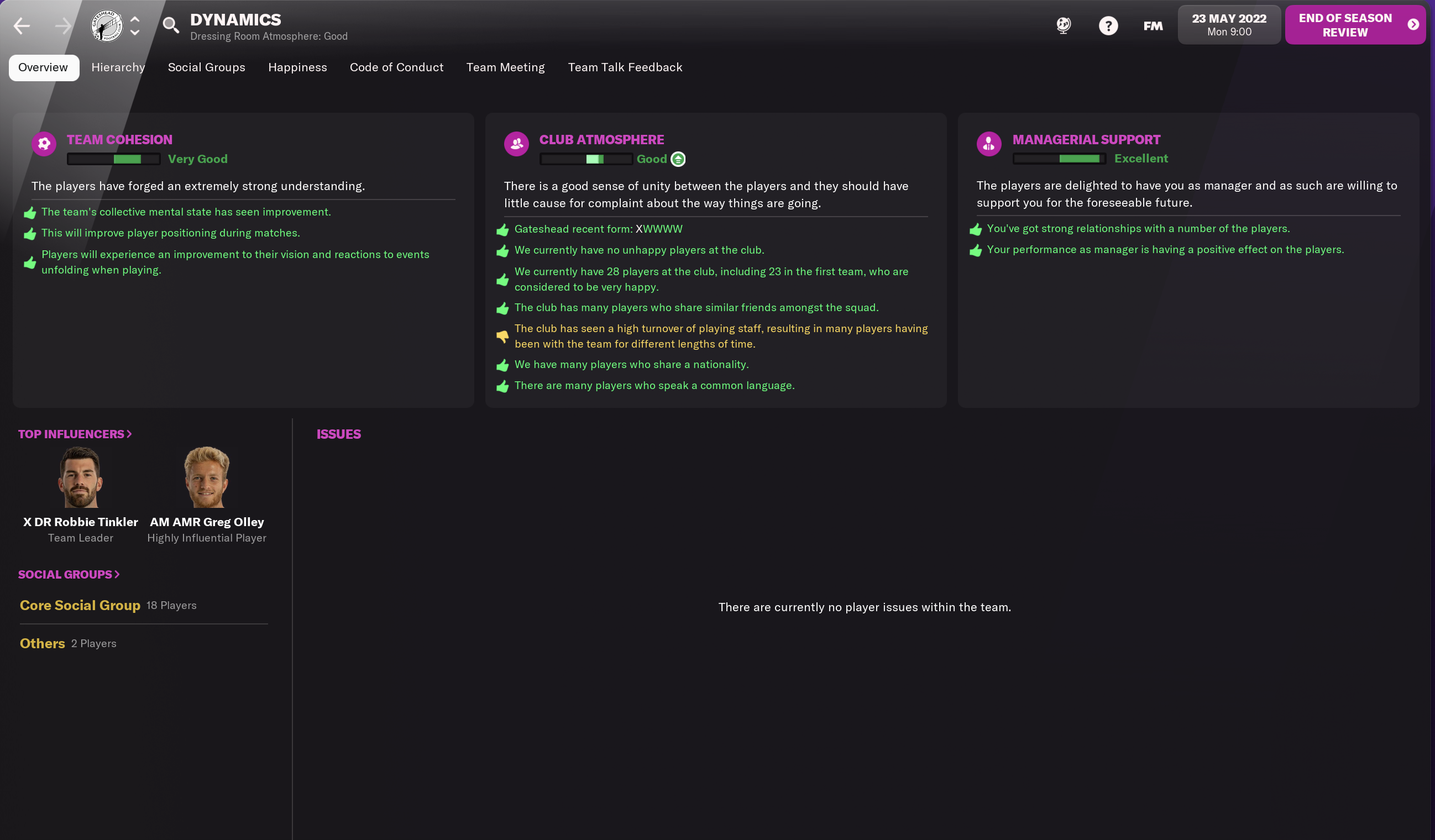 This is something I check at least once a month while managing a team. I always aim for my teams to climb the odds table, as it is a fast way to check how good are my players and how we are progressing as a squad in relation to the other teams in the league.

What I do to climb this table (at the beginning of the season we were in 7th position with 10-1 odds) is to sign a few (ONLY A VERY FEW) better players than the ones already in the team during the season. I always have several young first team players(6 out of 11) at least with more potential to develop, so as the season progresses and they get match time, they become better players making the overall squad increase in man quality.

This table also gives me a hint on which positions I must strengthen looking into the new season before getting the next odds table after being promoted. 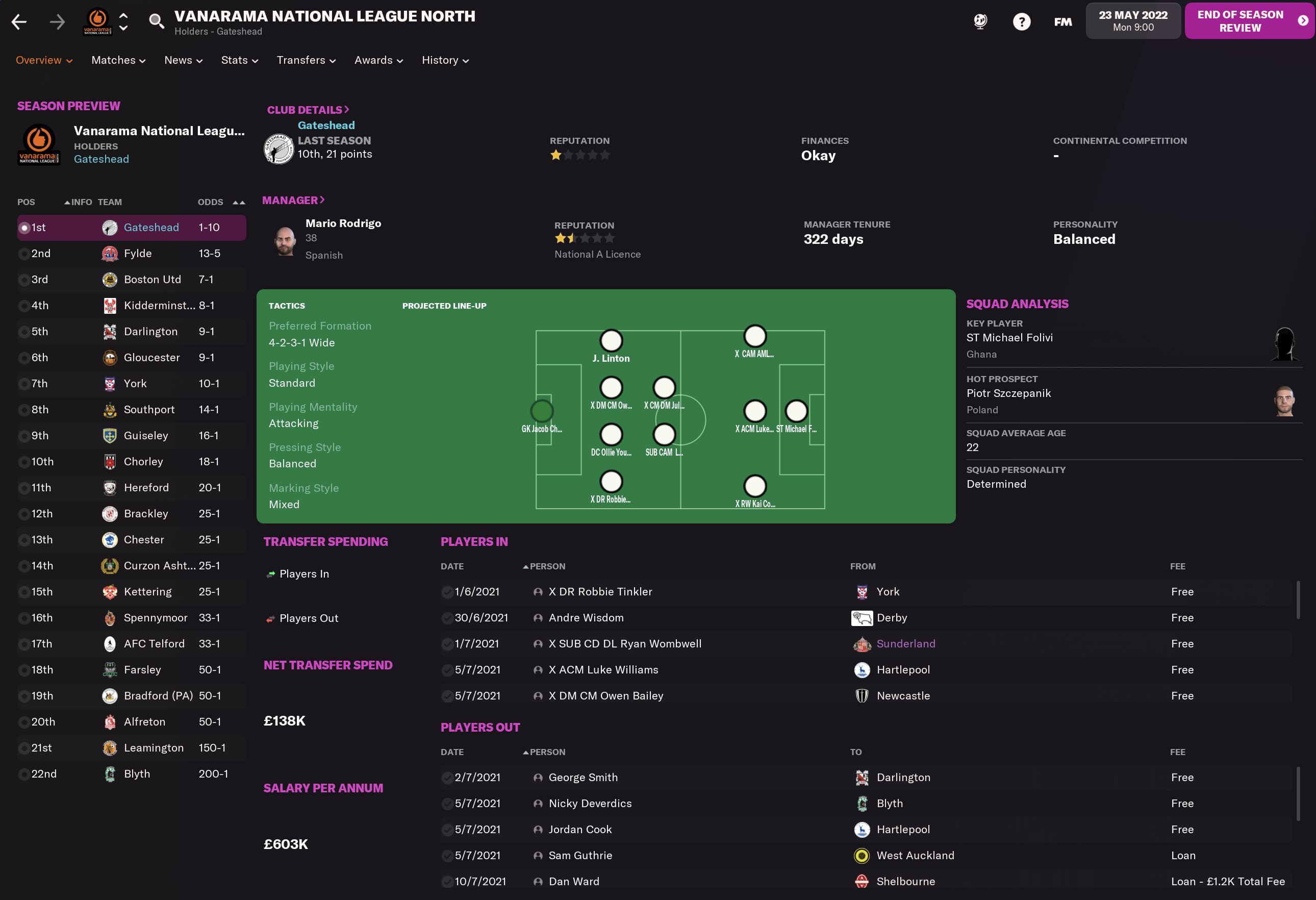 And before finishing this post, I say thanks you for reading it and thanks to my players who did great.

I already told them that next season we are going to aim for a straight promotion into the Sky League 2.

So it looks like I will be very busy during the transfer window, searching for first team players and for players I think I can make a huge profit after selling them.

I got a proven strategy for this that I’ve been doing since many FM editions that I will include in a future FM guide about how to make crazy money managing in the lower leagues.

And one more thing……

I am a lot into man management, before December I must be a favoured personnel of all my first 11 players, and before the end of the league, I must be the favoured of the whole squad.

How to achieve this?

Why is it so important?

I will be revealing my strategy in a future FM man management guide.

Where will we finish in the Vanarama National League? Let us know in the comments and on social media.