Hi, welcome to a new episode of my save managing Gateshead from Vanarama National North to Glory.

Second Season: We lifted the FA Trophy Cup and the Vanarama National League without loosing any games with 122 points in 46 matches.

Fourth season: We Won the Sky Bet League 1 and the Papa John’s trophy.

The media and the odds expected us to finish in 21st position….. 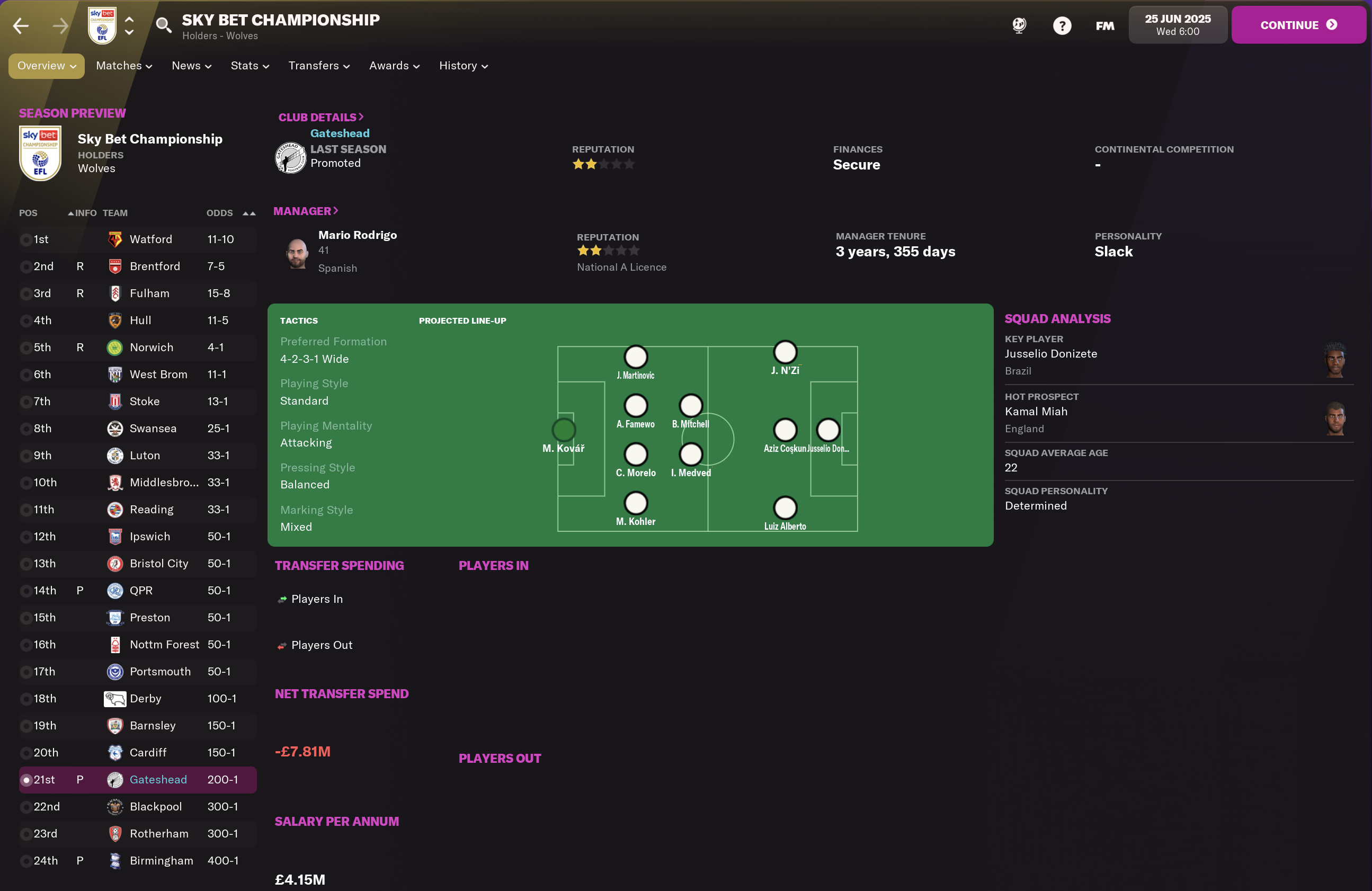 But once more we did incredibly great over performing the initial expectations set on us. 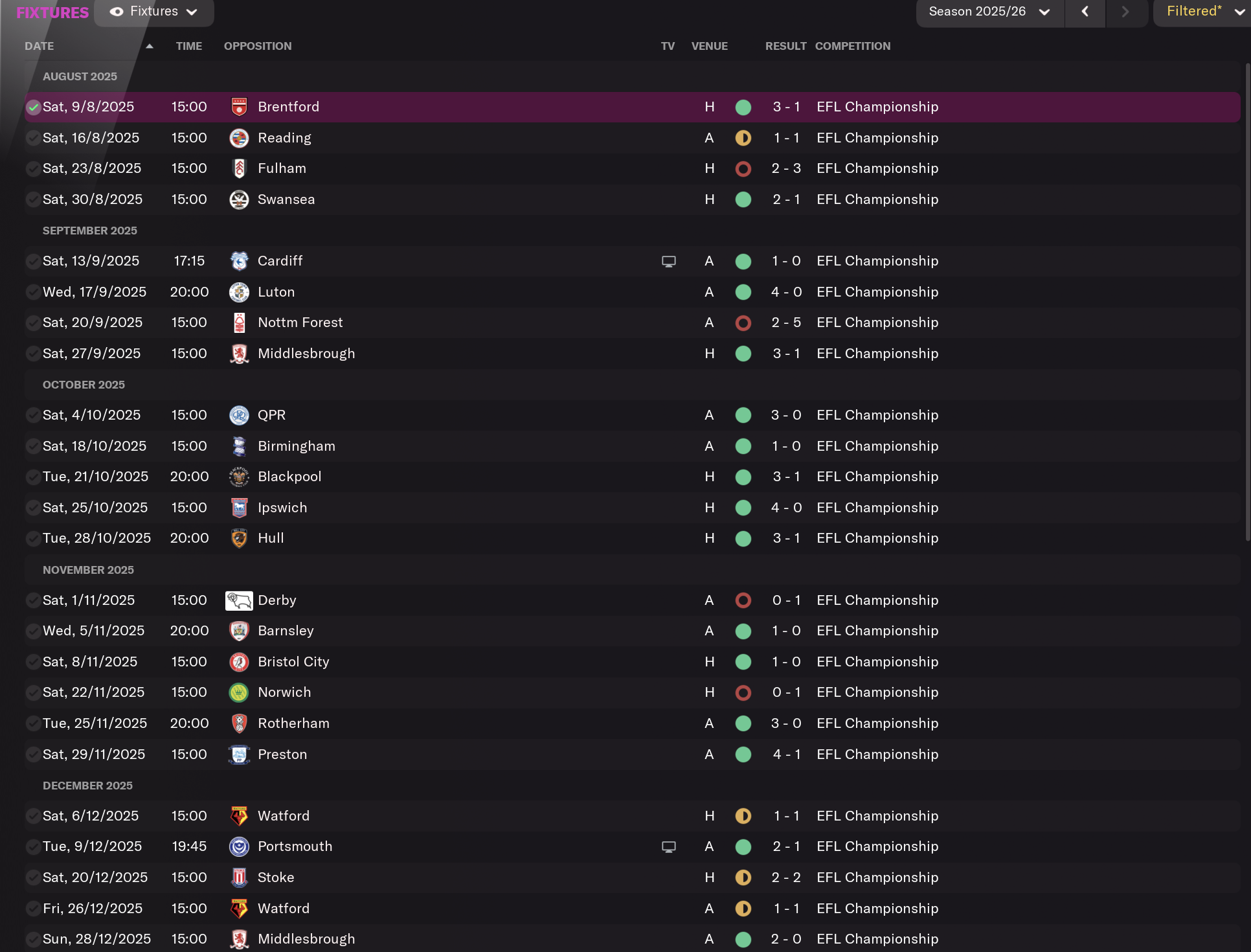 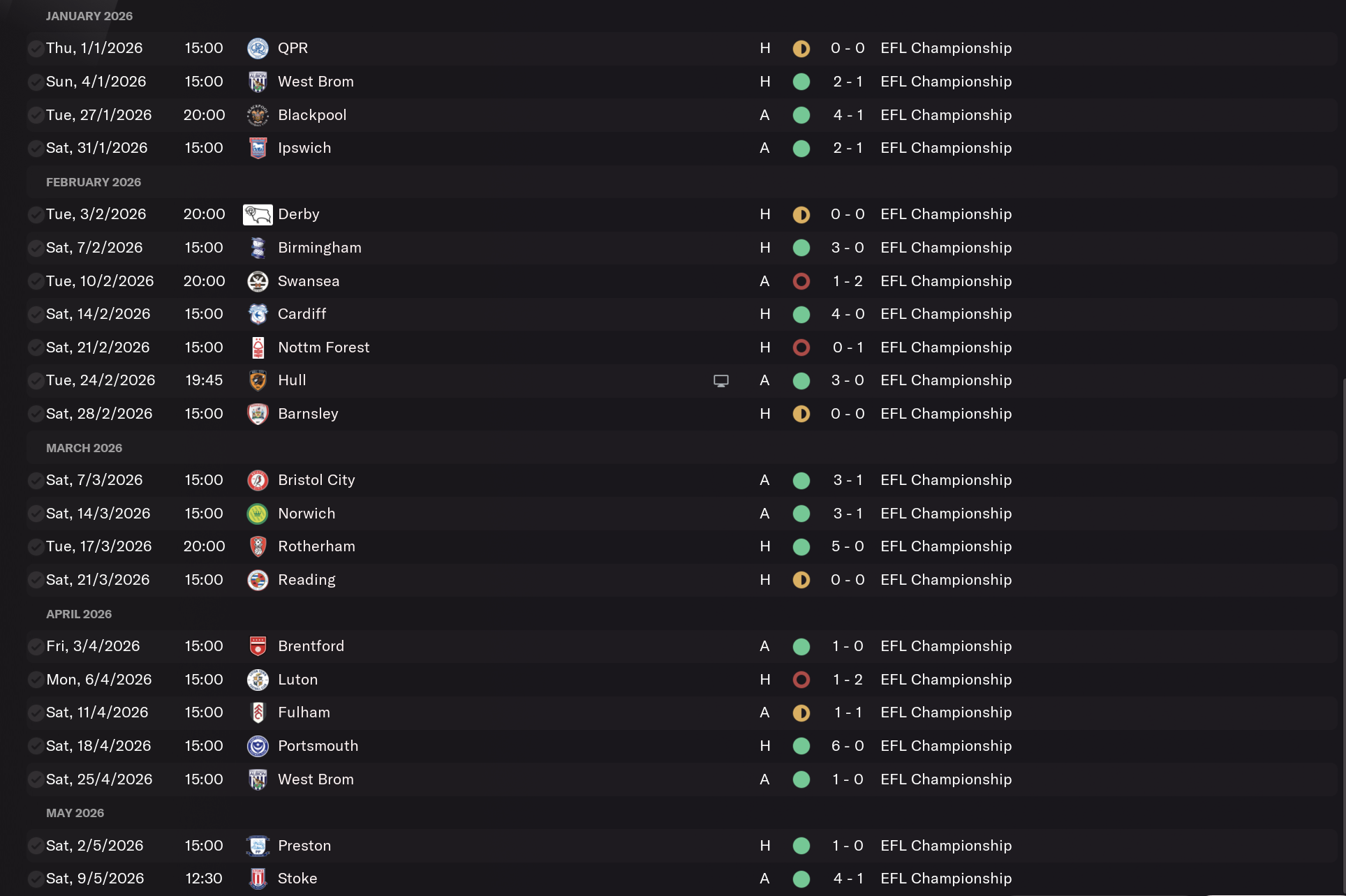 Yes, we won the league and archive back to back promotions from National League North to Premier League! 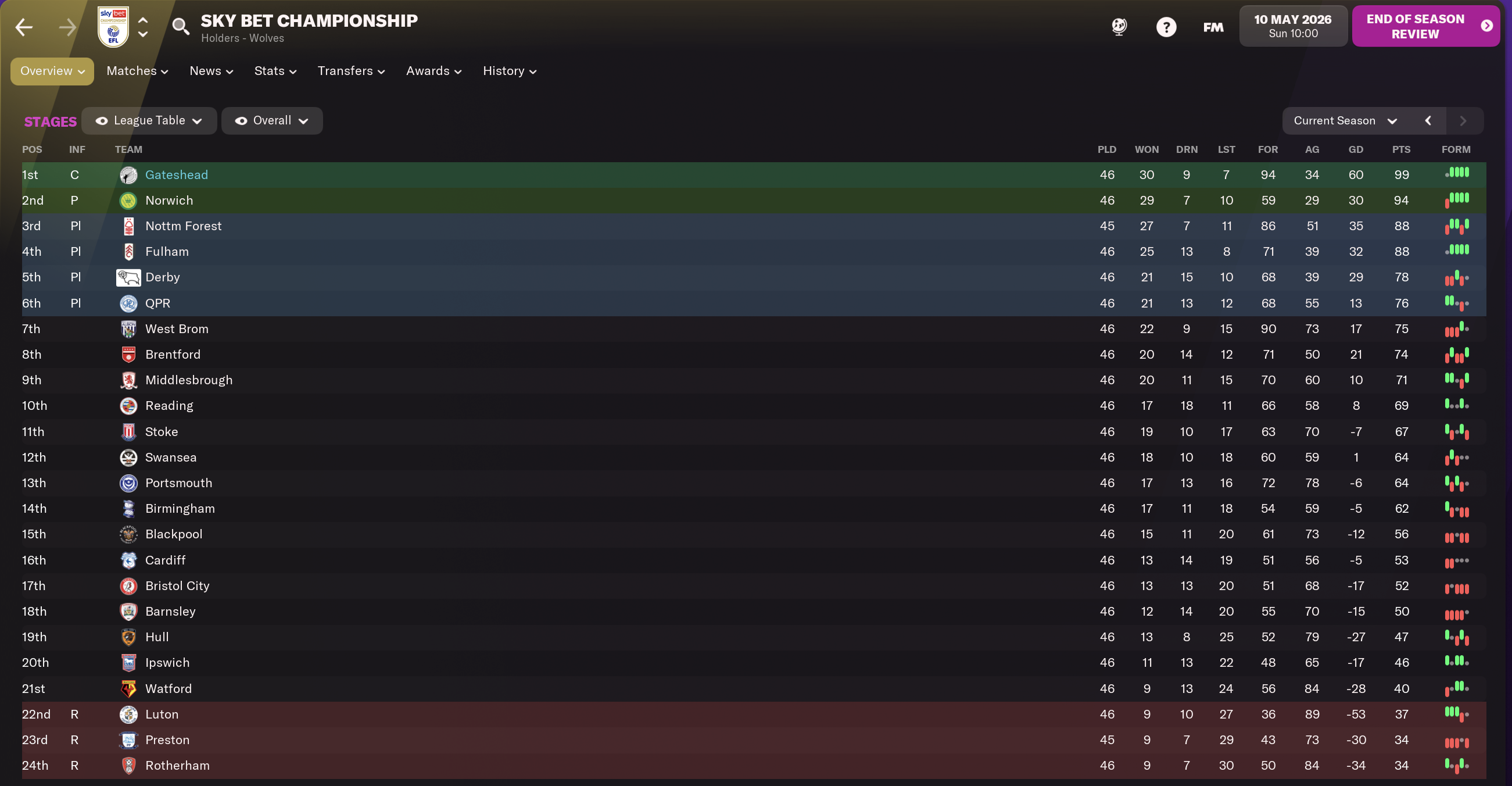 By the end of the season we are in 15th position, this means that I will have a very tough challenge next year in  the Premier League. 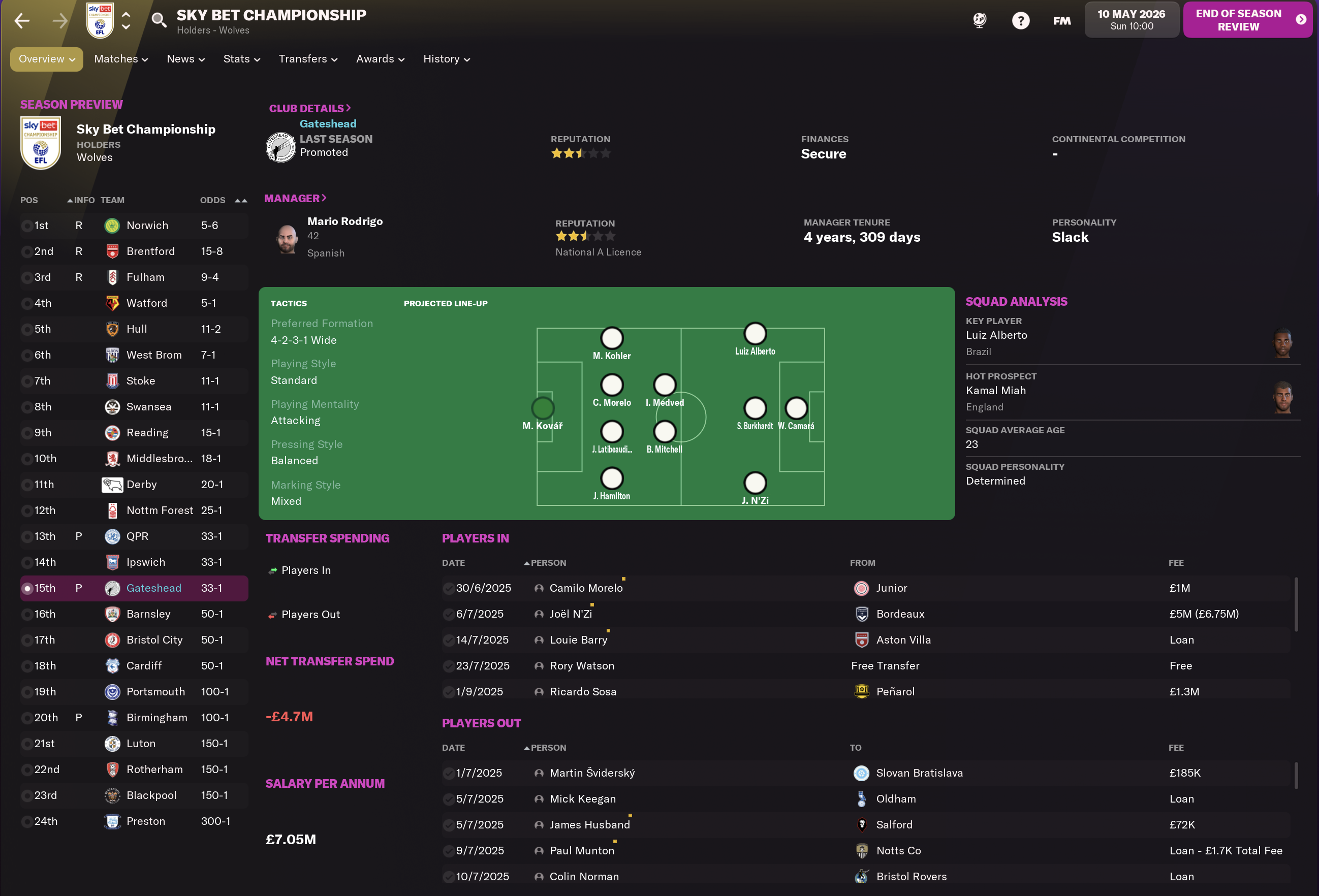 We underperformed in this cup after being defeated by Doncaster in the 3rd round, but was a good thing as we were able to focus in the League. 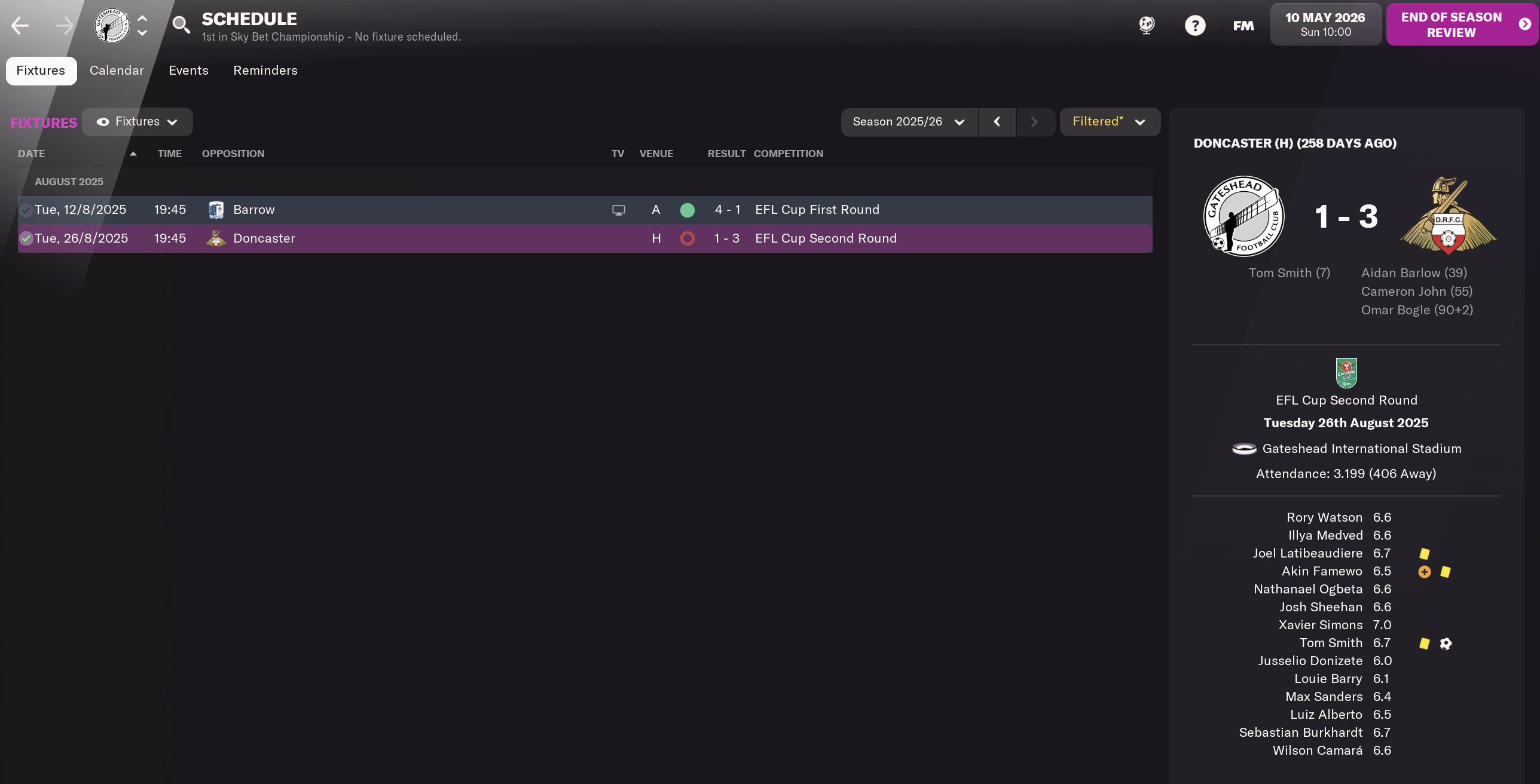 The board expected me to make it to the forth round.

We only made it to the 3rd round, and got knocked out in a replay match by Premier League team Bournemouth. All first 11 team players ended up having an average rating over 7 points except central midfielders Rossiter and Mitchell. 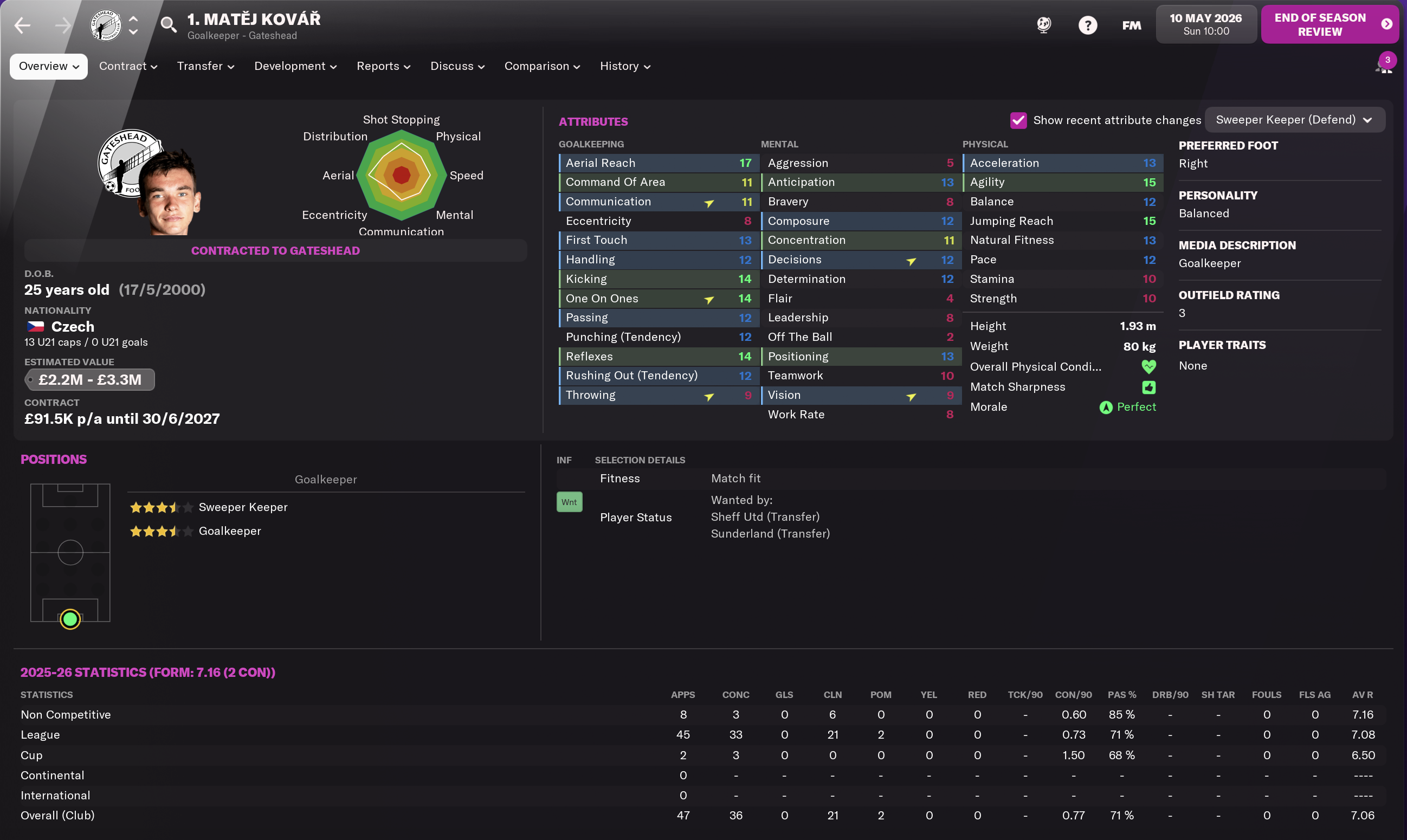 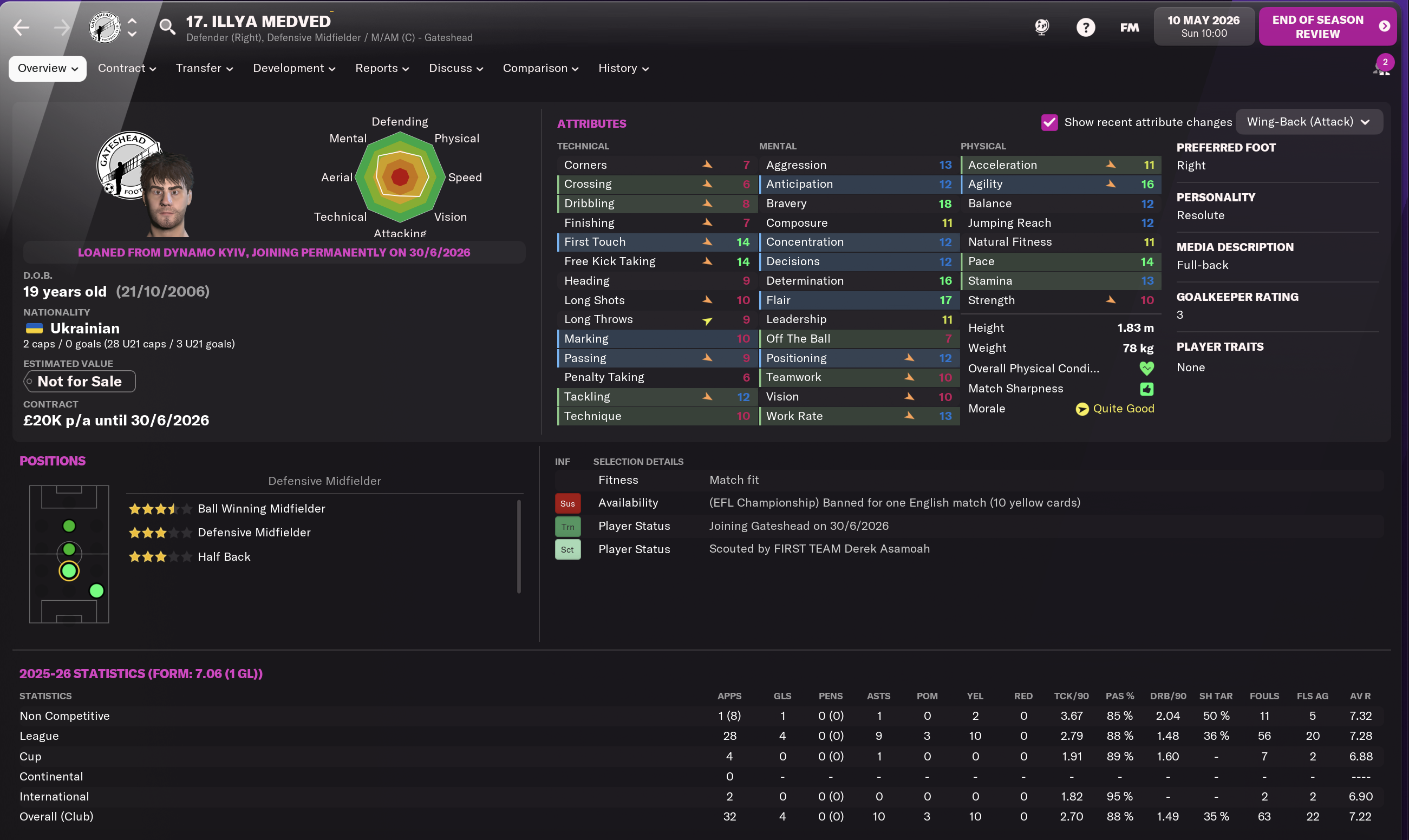 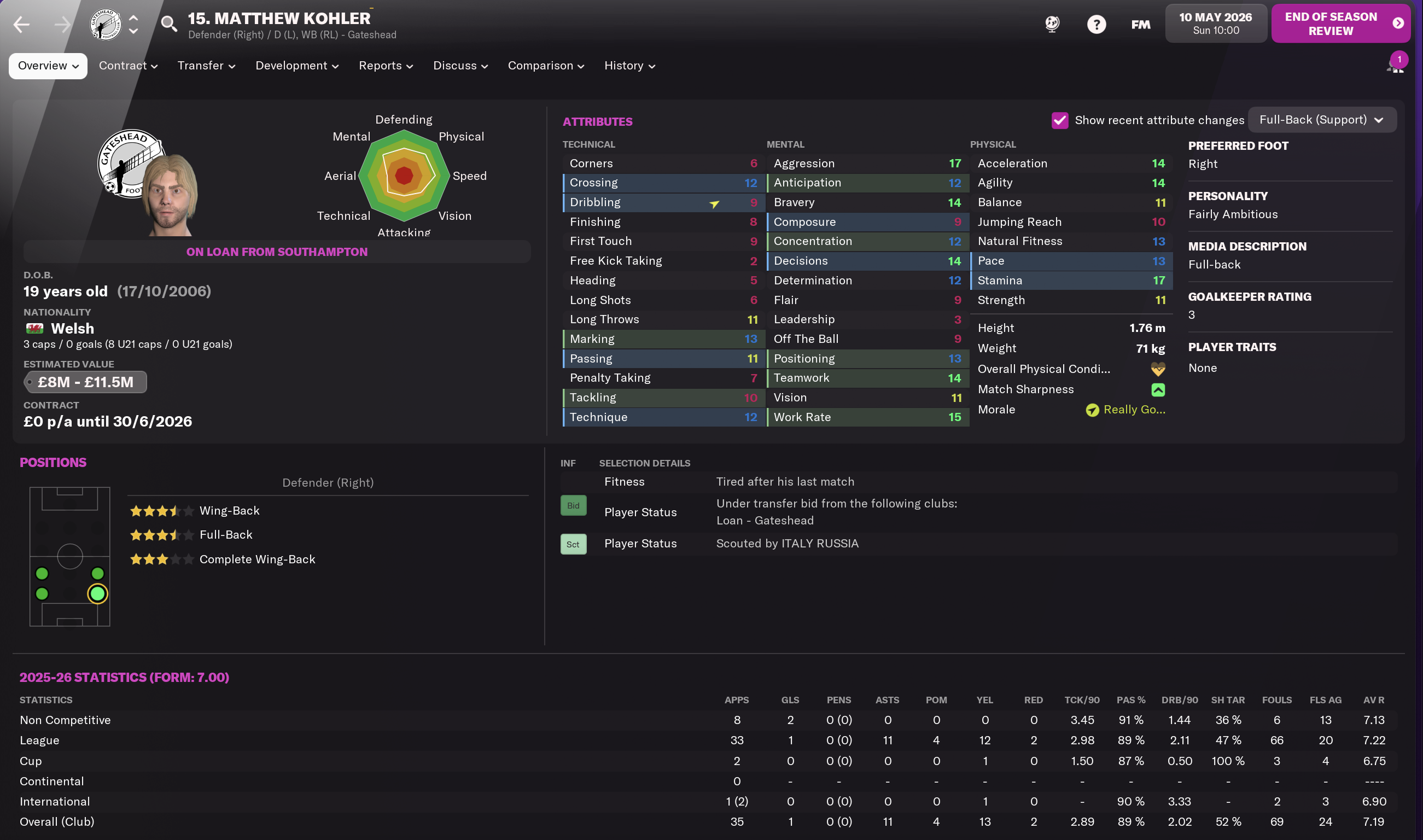 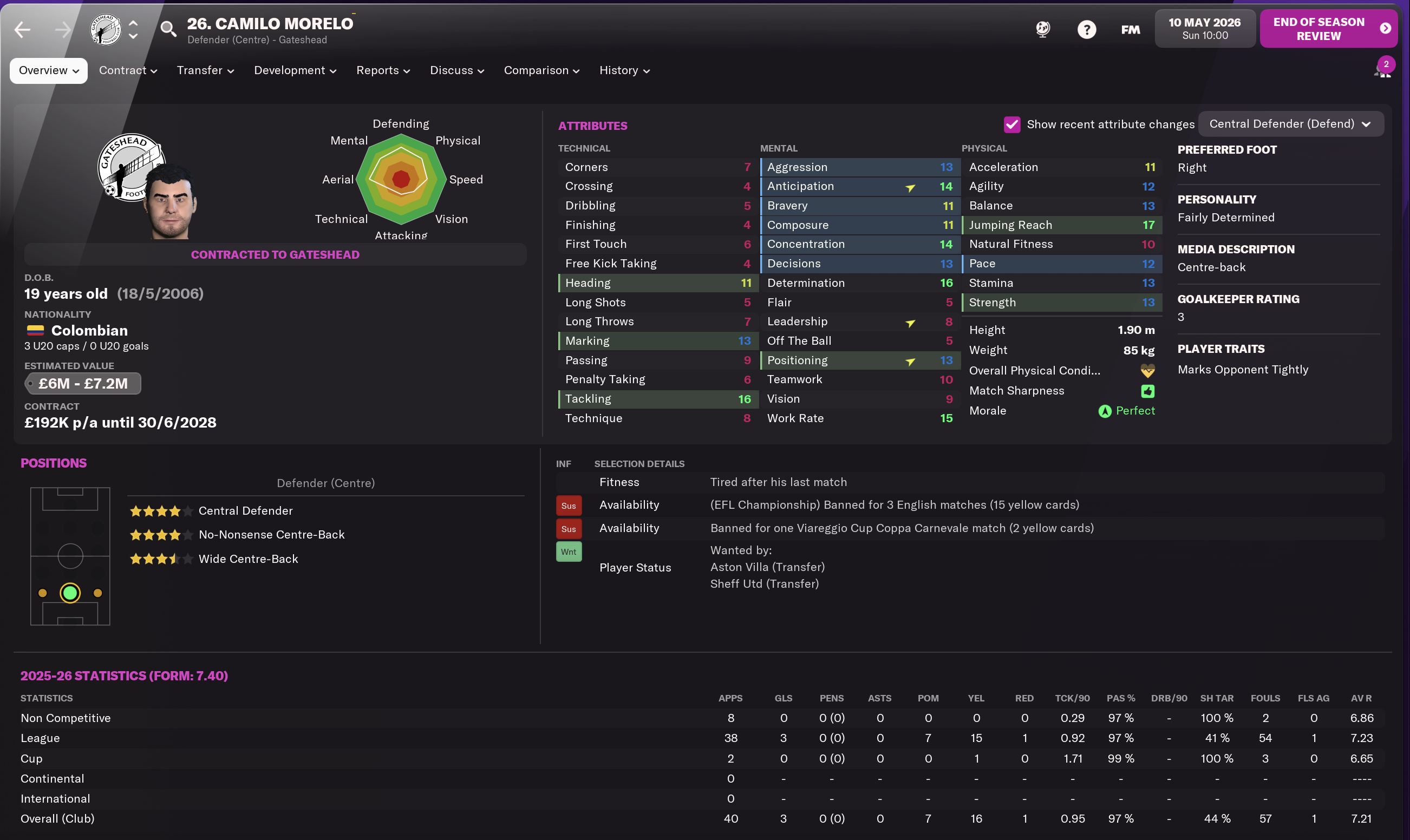 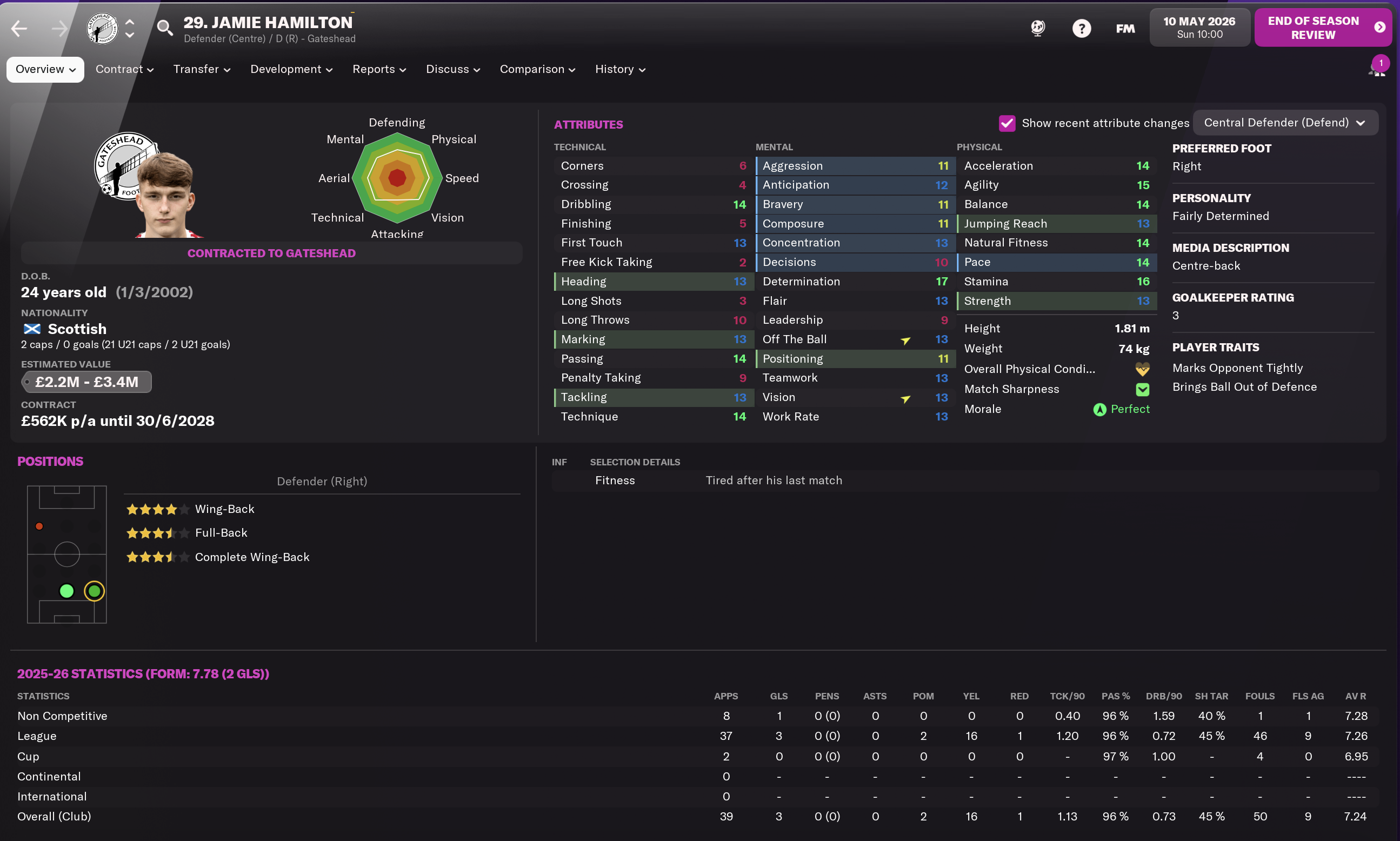 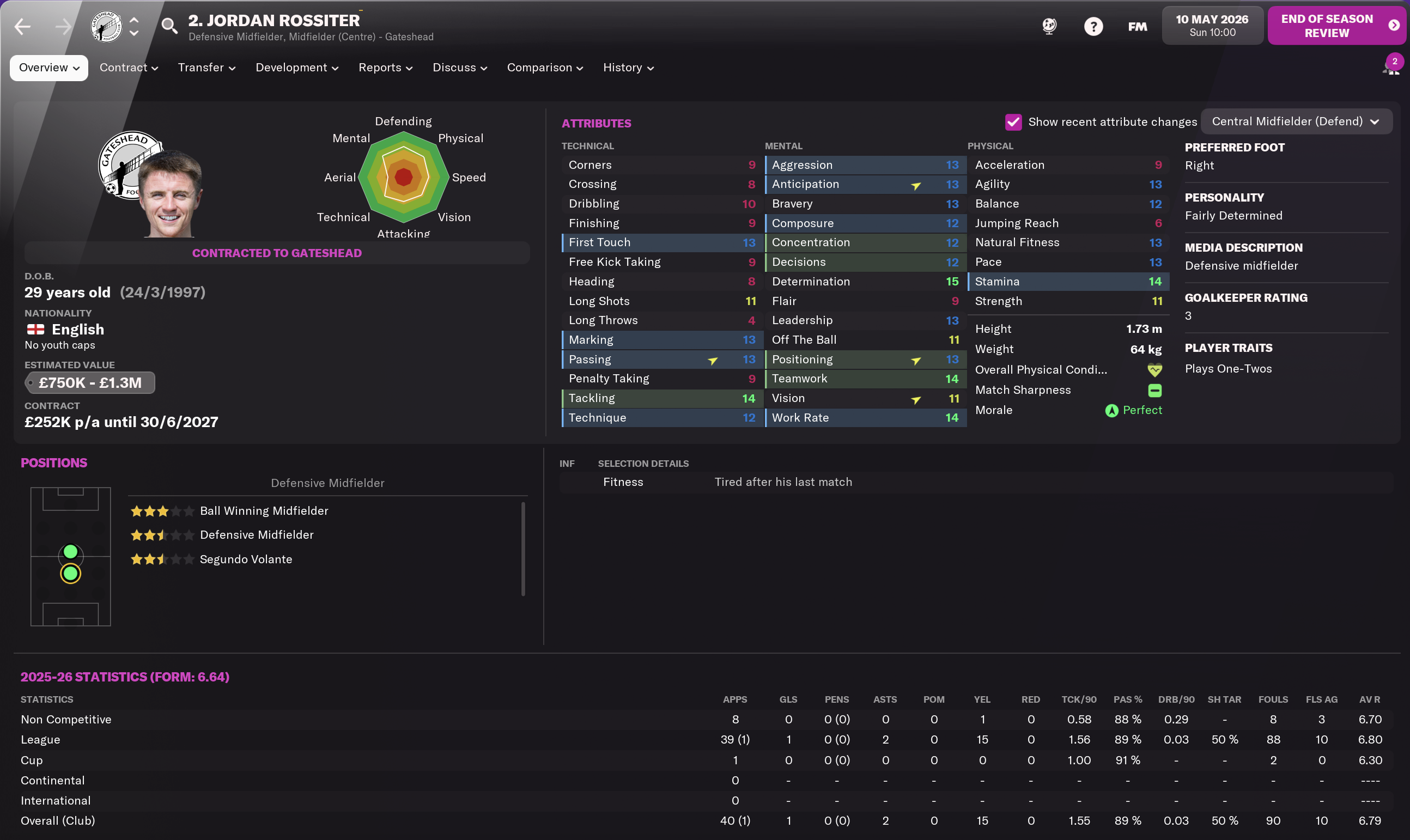 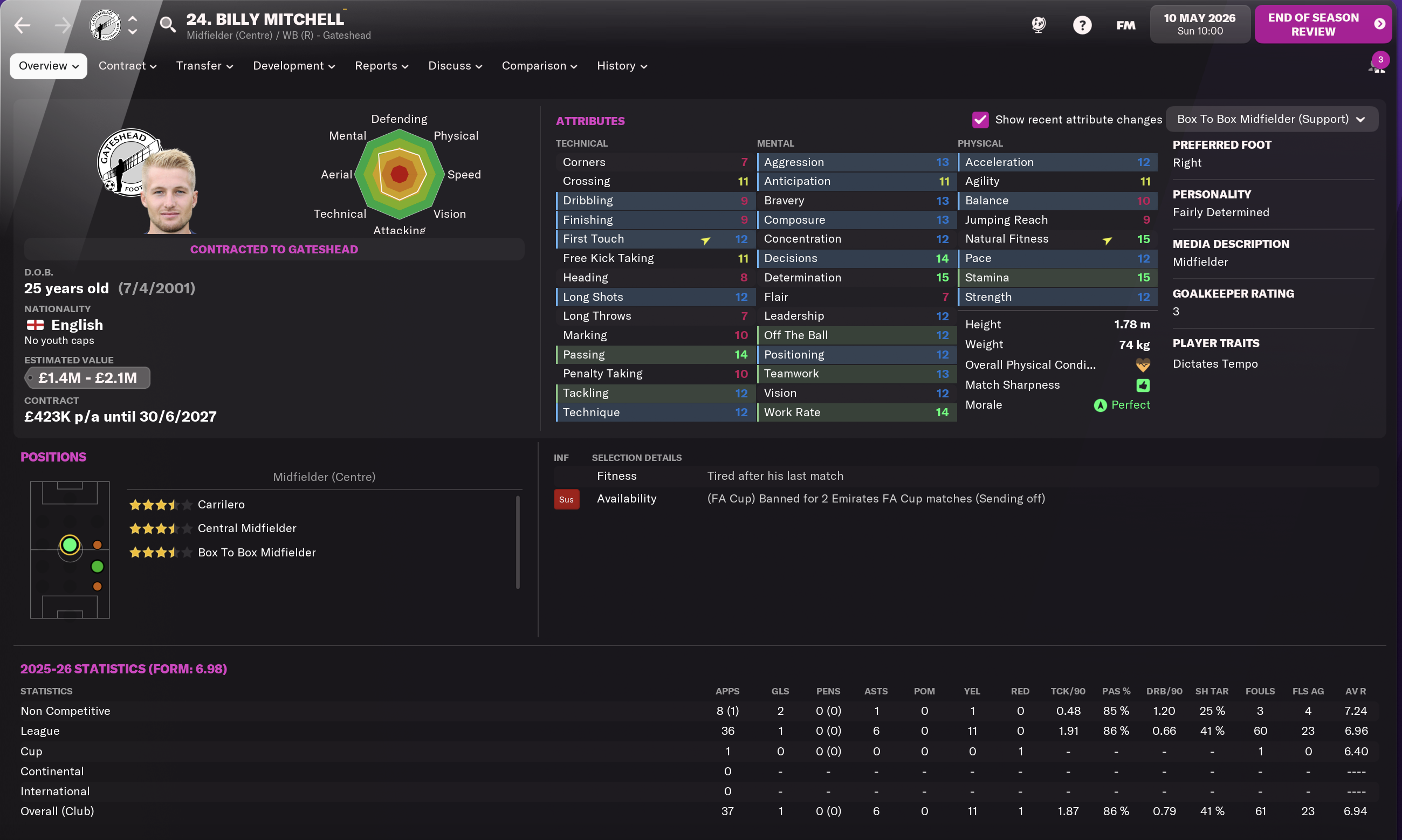 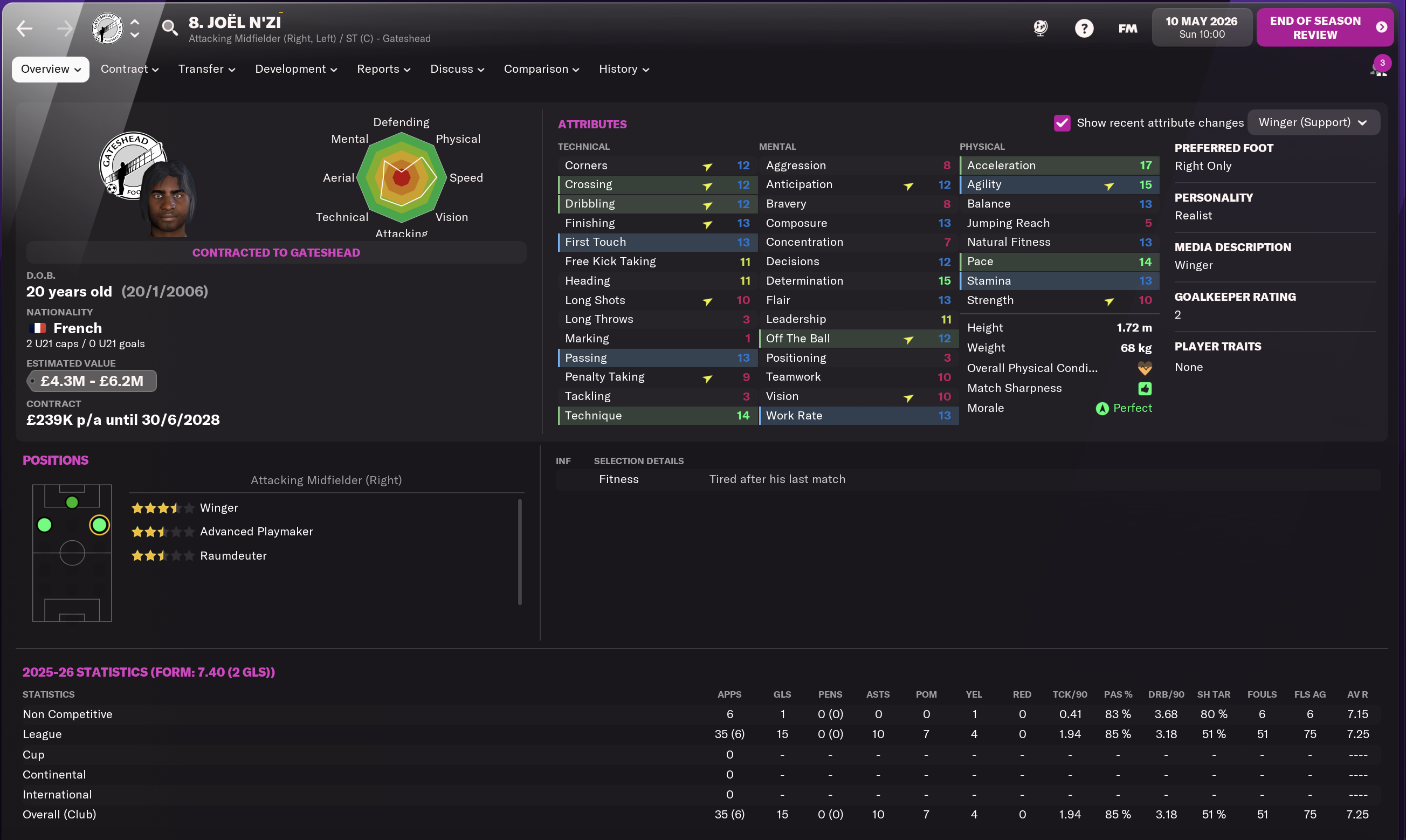 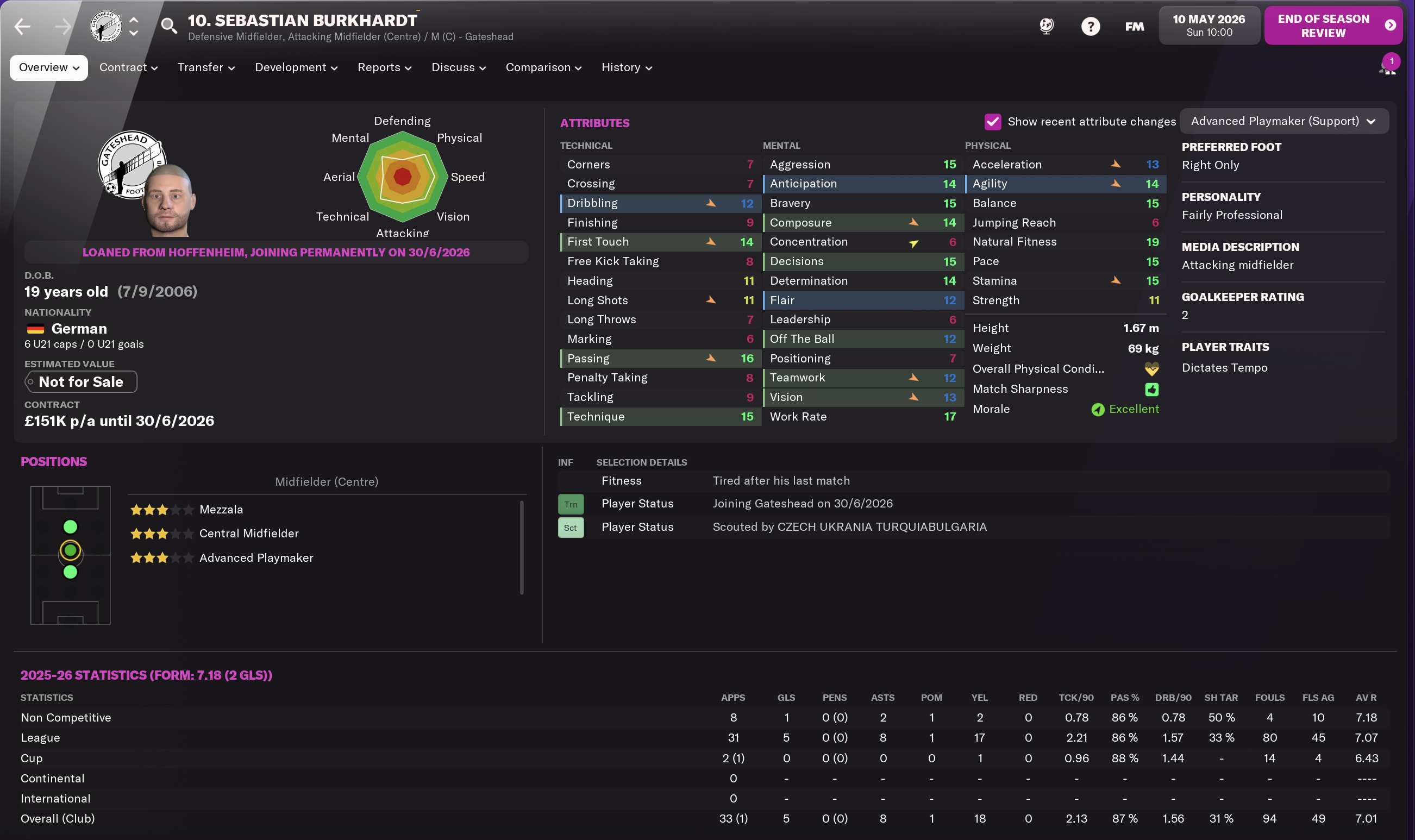 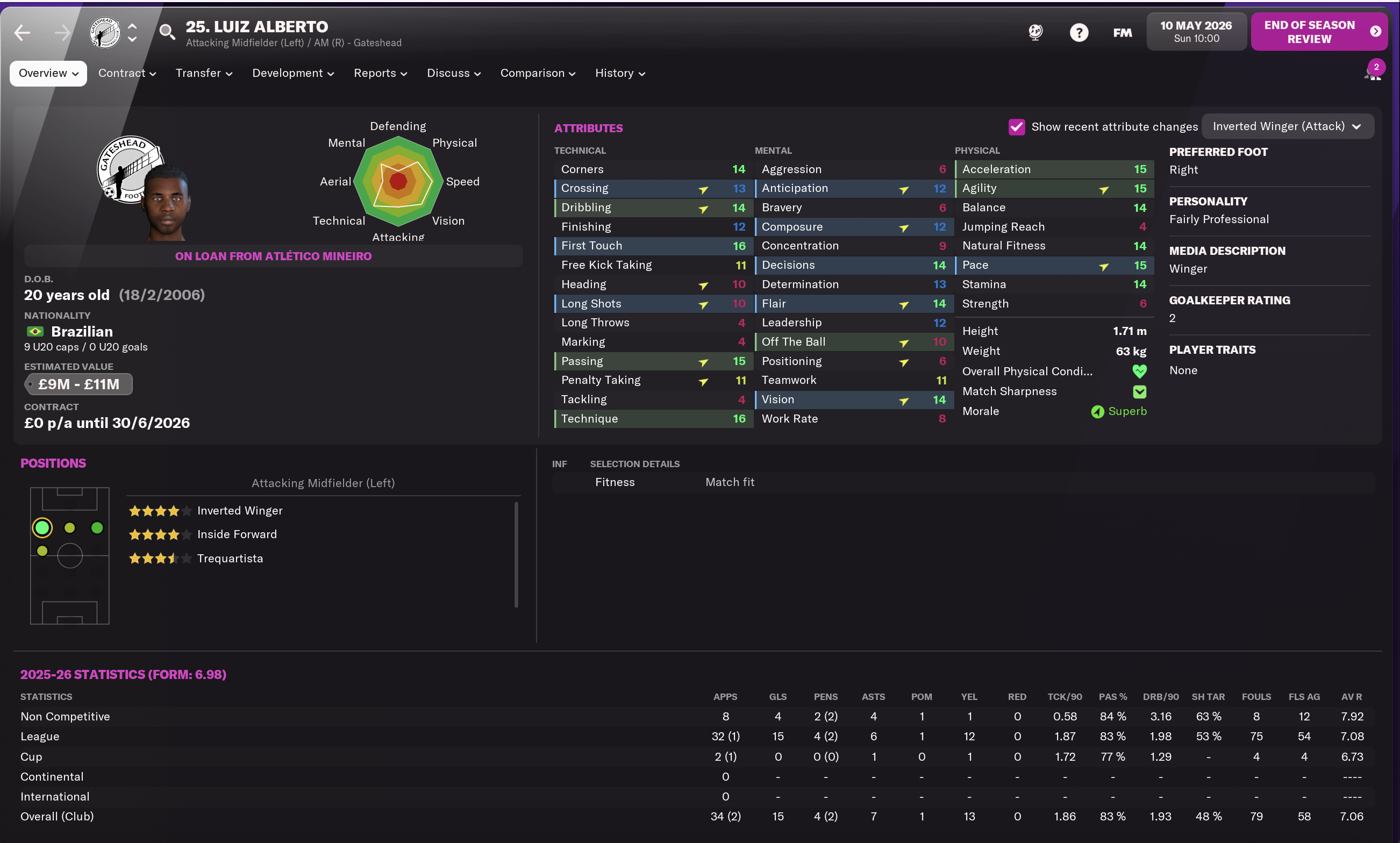 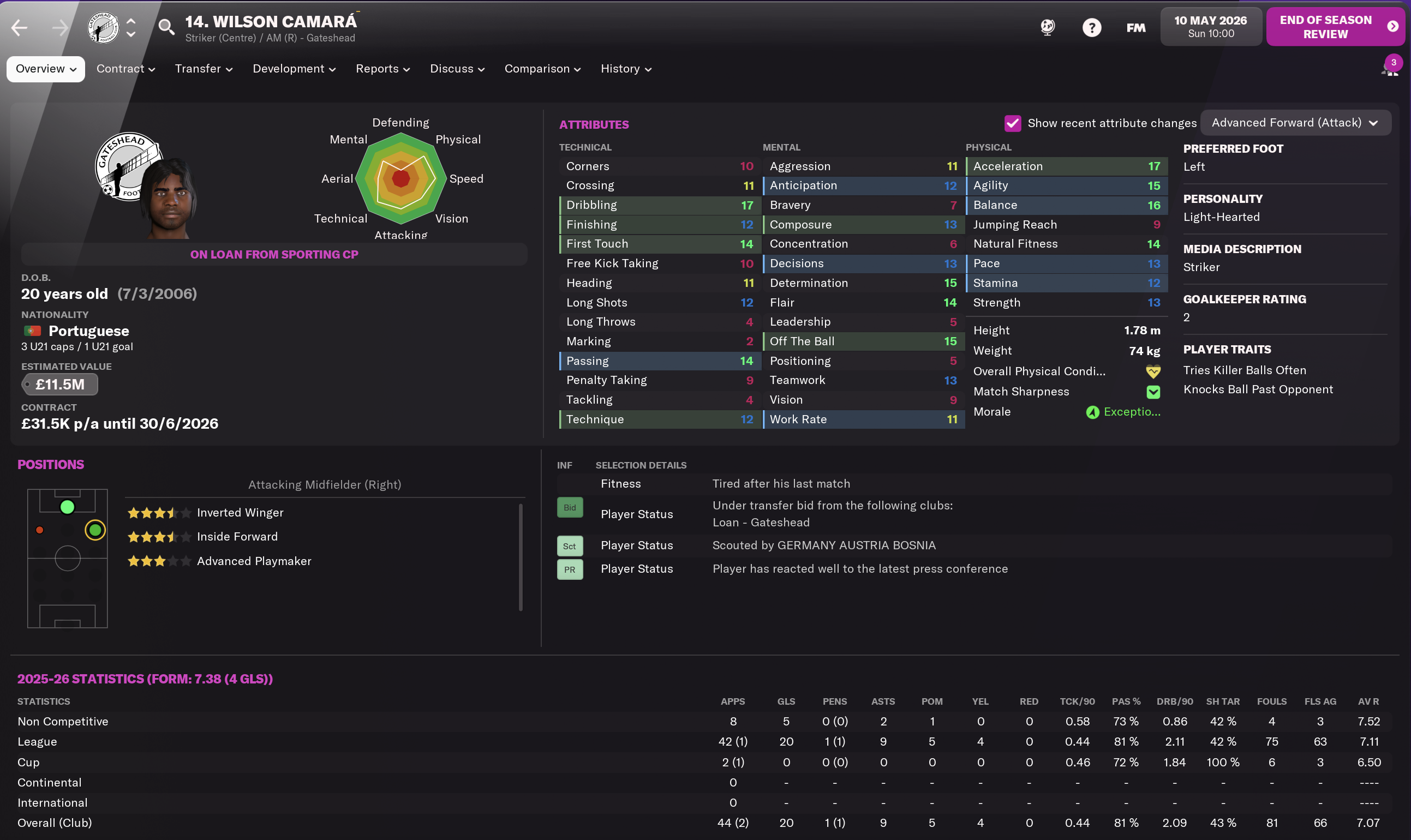 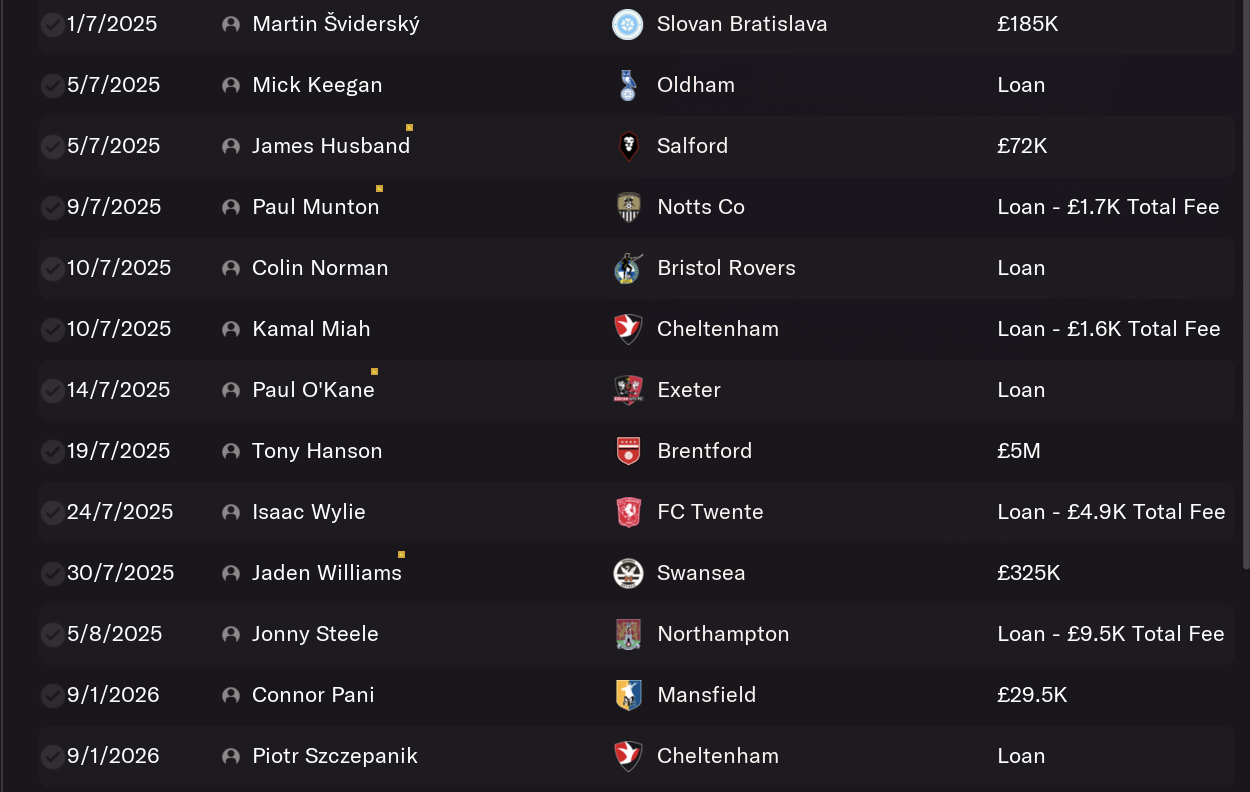 As usual I brought many youngsters and many other  players to face the challenge of a first season in the Championship. Six of the new players will go straight into the first 11 squad. 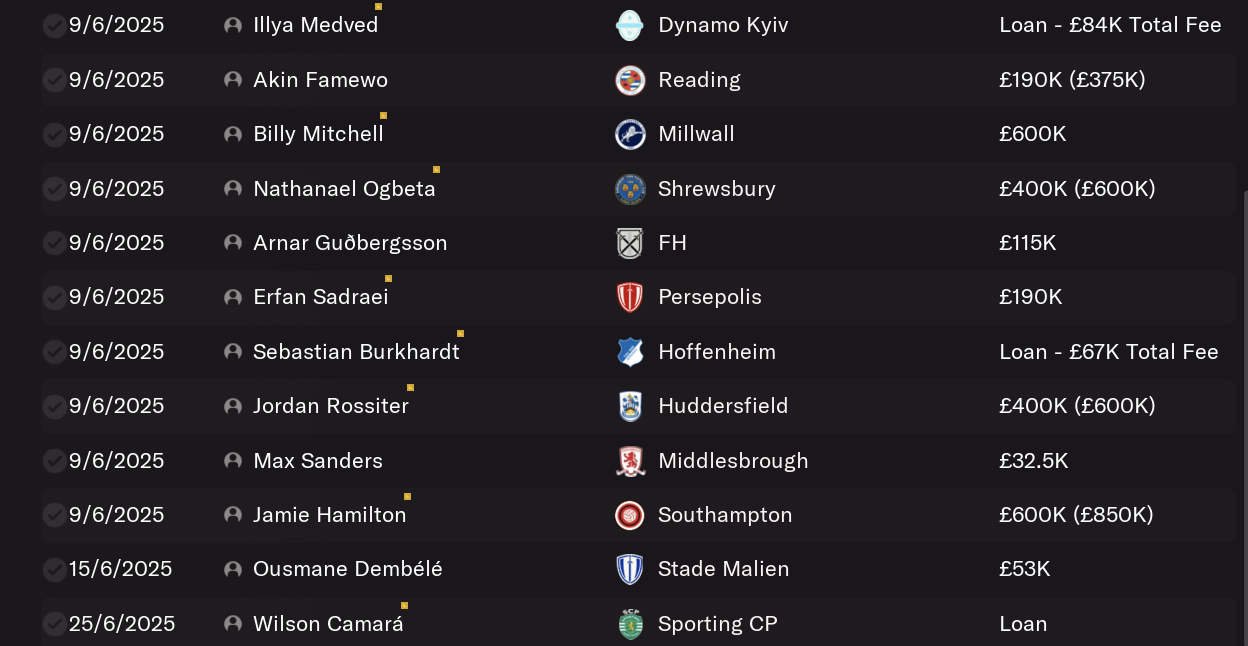 At the beginning of the season the media predicted that we were going to finished in 21st position.

We have a determined squad and with  professional status.

Gateshead’s reputation has improved from regional to national, this should make the club more appealing to future signings. 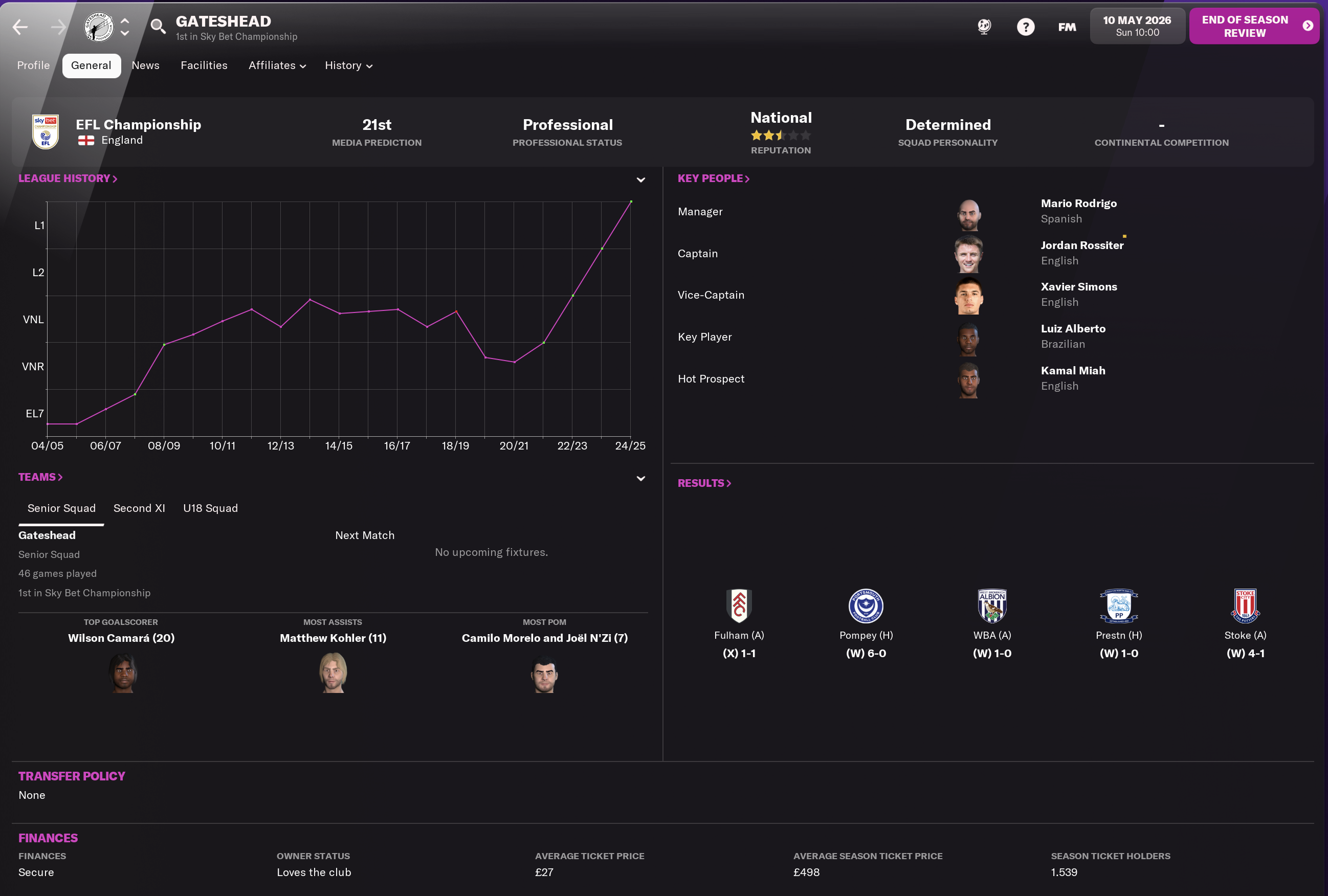 I am considered a club legend since last season. 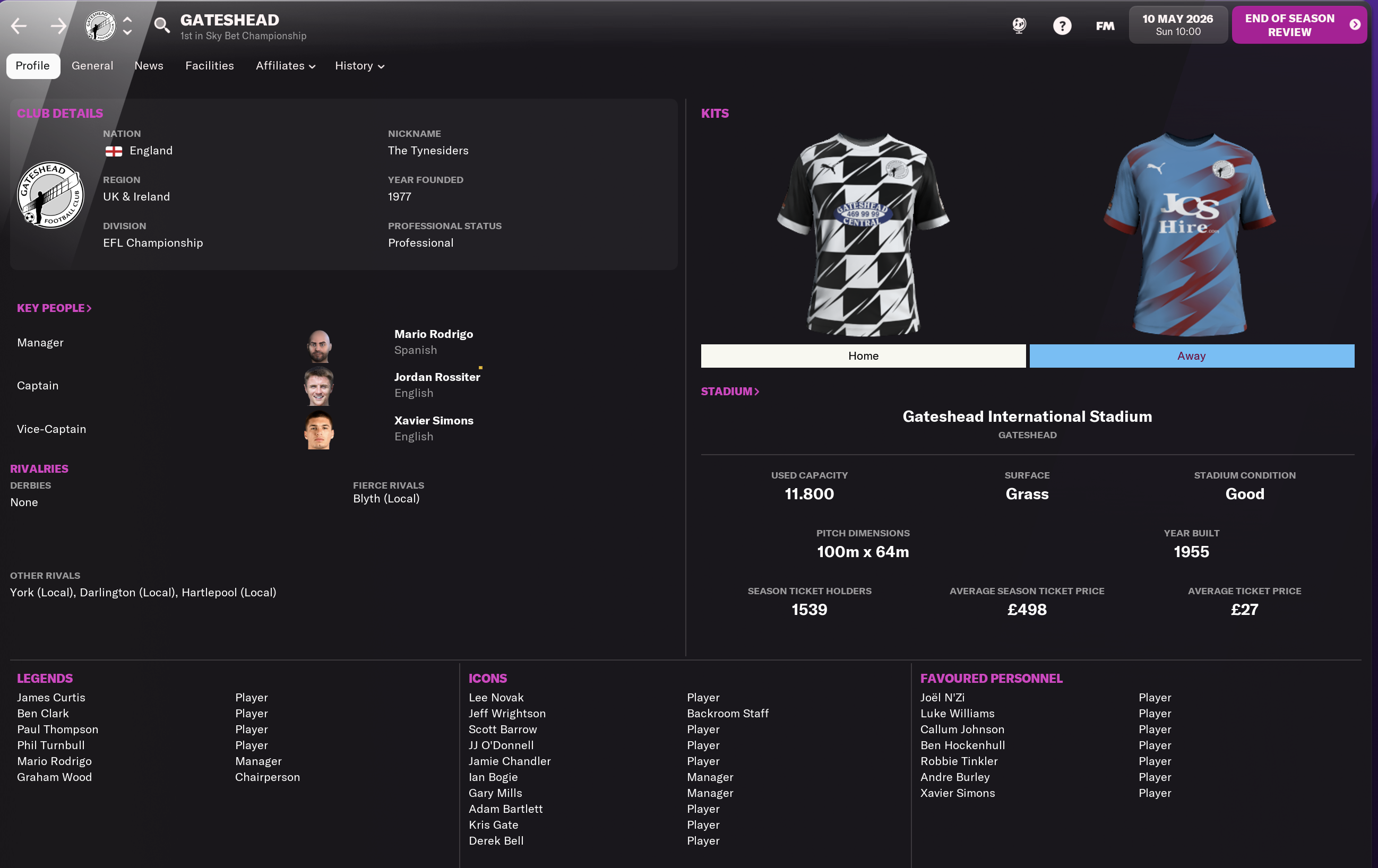 The academy coaching and youth recruitment are average, with a youth level of 3.

The stadium has a capacity for 11.800 all seated fans.

I will be investing in facilities as soon as I start making some serious cash.

We got an affiliate link to powerful Man City, with 2 players on loan for free, and the tickets sale of a home friendly match.

This link will be cancelled as we will be playing in the Premier League next season.

Going into the next season, finances are looking very good with an overall balance of £22M, a transfer budget of £22M and a wage budget of £18M. During this season I used my 4-2-3-1 lower league attacking tactic which was successful in the last four seasons. I will never get tired of stating this, you have to get this section ok, if not, it doesn’t matter how much money you have, how good  your players are, which tactic or training schedule you use, if this is not ok, you will “struggle” to say the least. 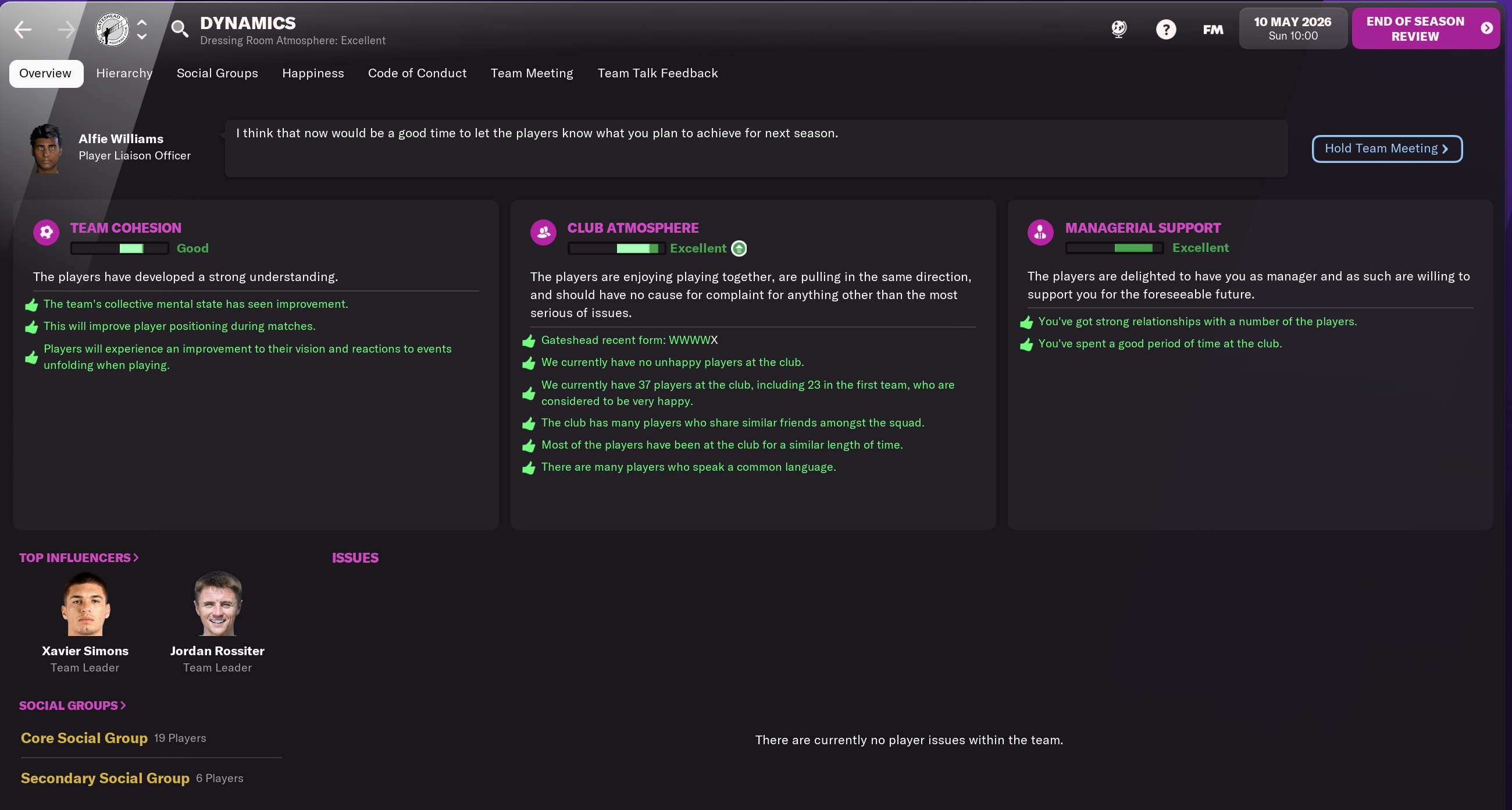 It is also very important to get as few groups as possible, with a numerous and tight core social group like this.

Now let’s have a look at the young players with high potential in the squad.

We have a lot of players with potential, next season Luis Alberto, Medved and Burkhardt will be joining our team on a permanent basis. I will also extend Camara’s loan.

All training categories have 3.4 to 4 ⭐️ stars 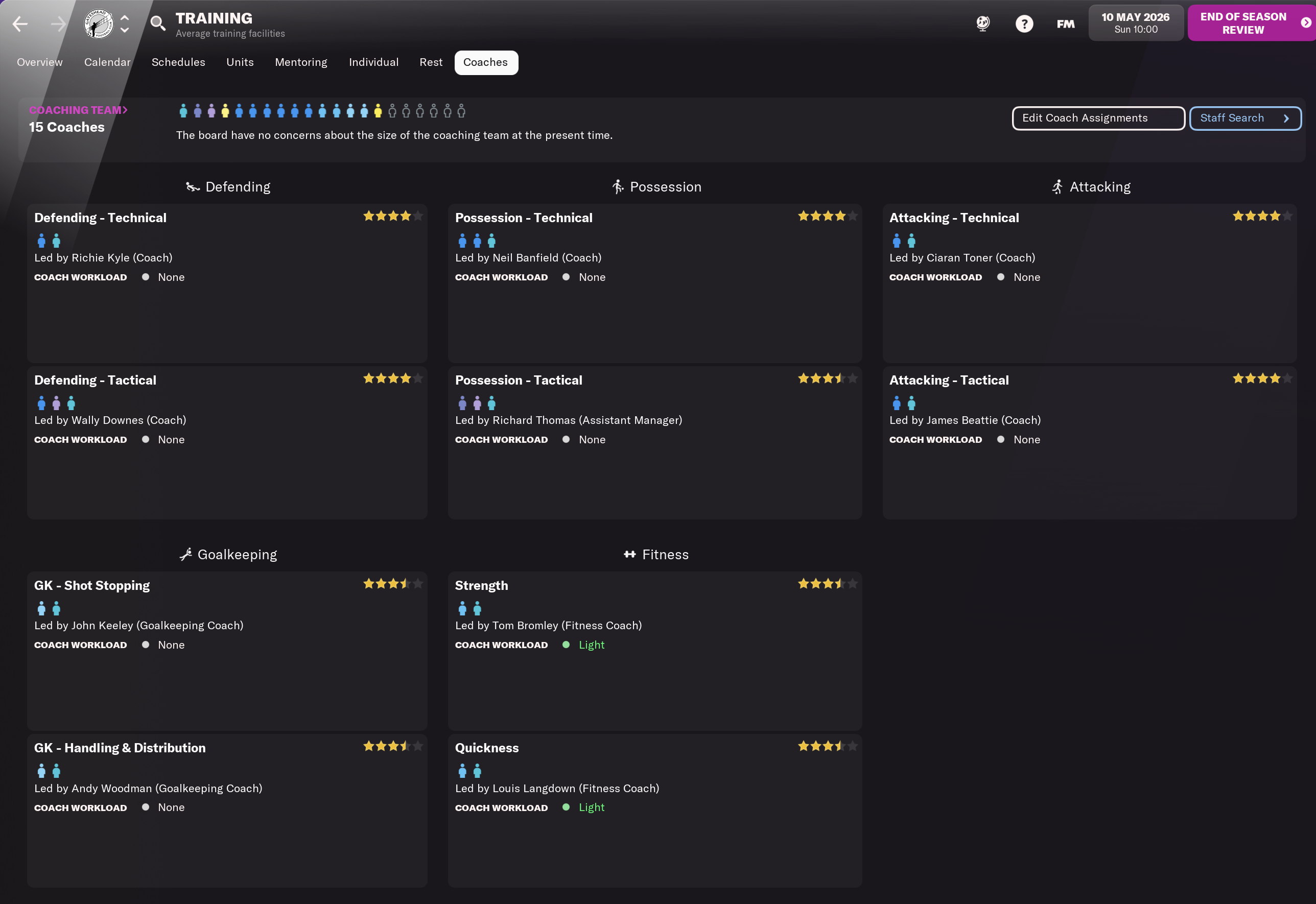 Thanks for joining me on this save and for reading this post, see you on the next one managing in the Premier League! 😃