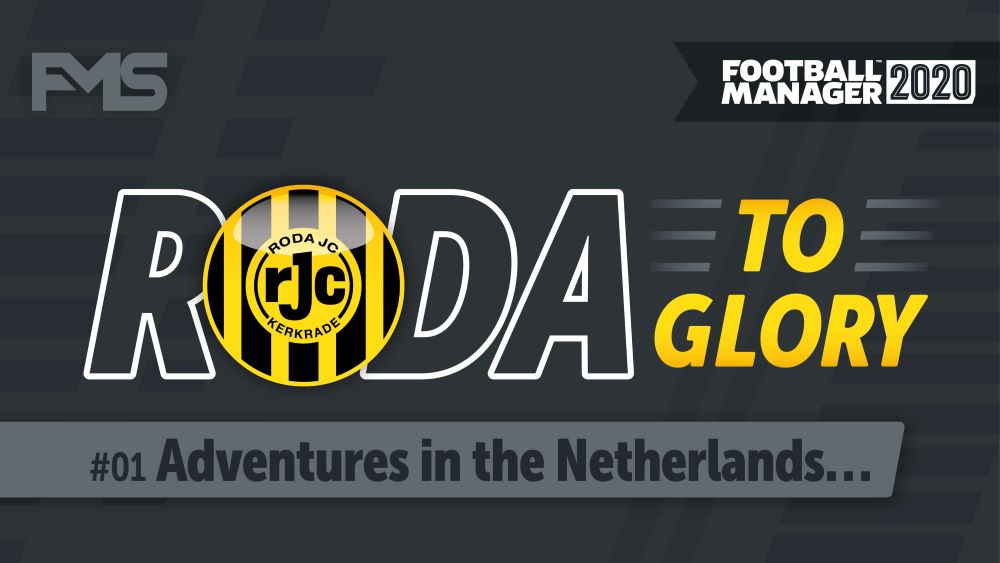 Ten seasons in, and whilst Roda JC are definitely moving up in the world, we don’t have all that much to show for it. Three consecutive second-place finishes and a set of Dutch Cup runners-up medals are all we’ve collected since before any of our players were born. We’re going to do our best to end the trophy drought this season. 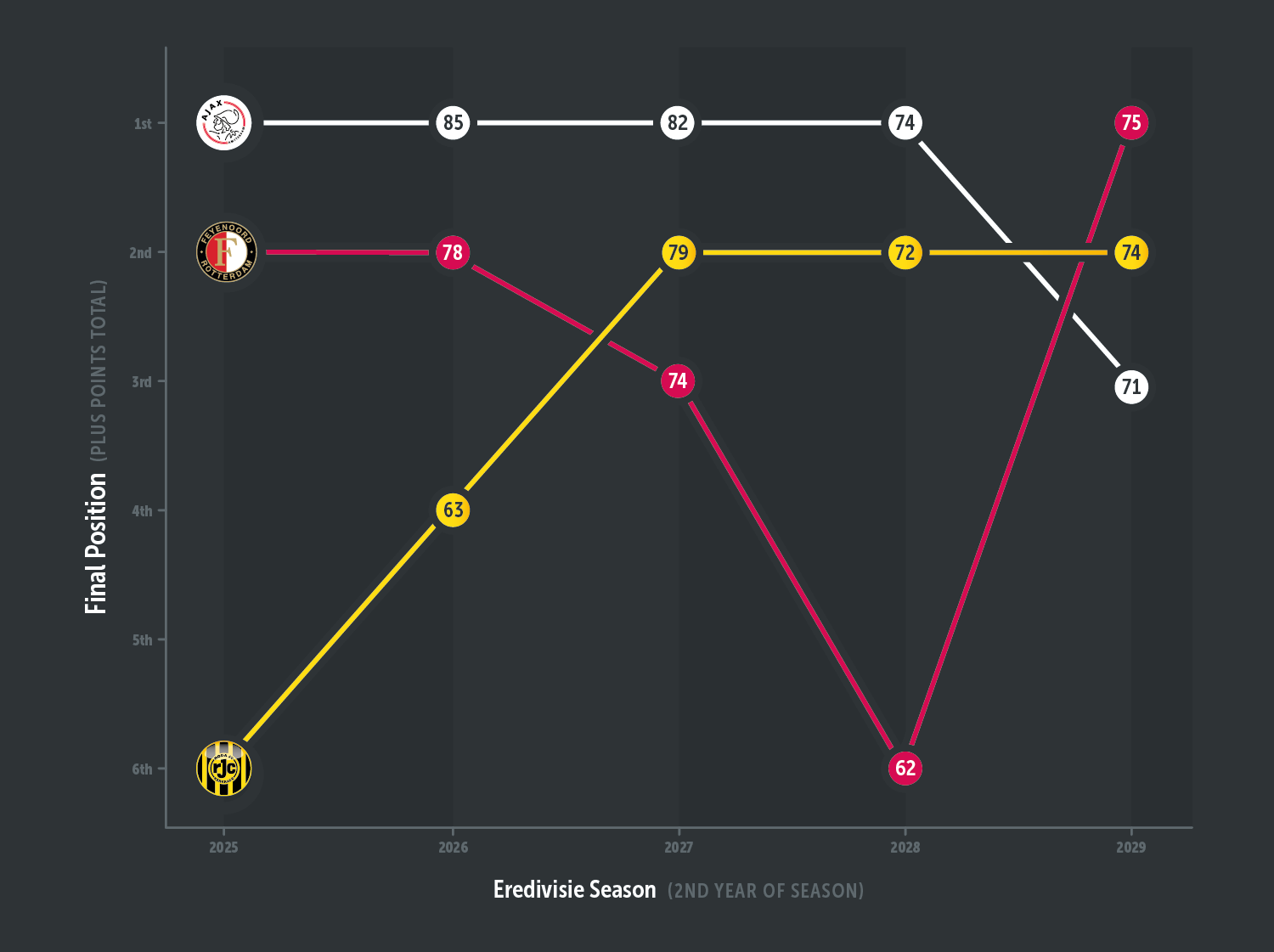 Before we can put things right, we need to understand what went wrong. This graphic shows the twists and turns of the title race over the past few campaigns. The points totals (inside each coloured circle) tell an interesting story: we’ve actually been dead unlucky. Our points total in 2027 would have been good enough to take the trophy in 2028 or 2029, but that’s only so much comfort given the painful way that we fell away on both occasions. 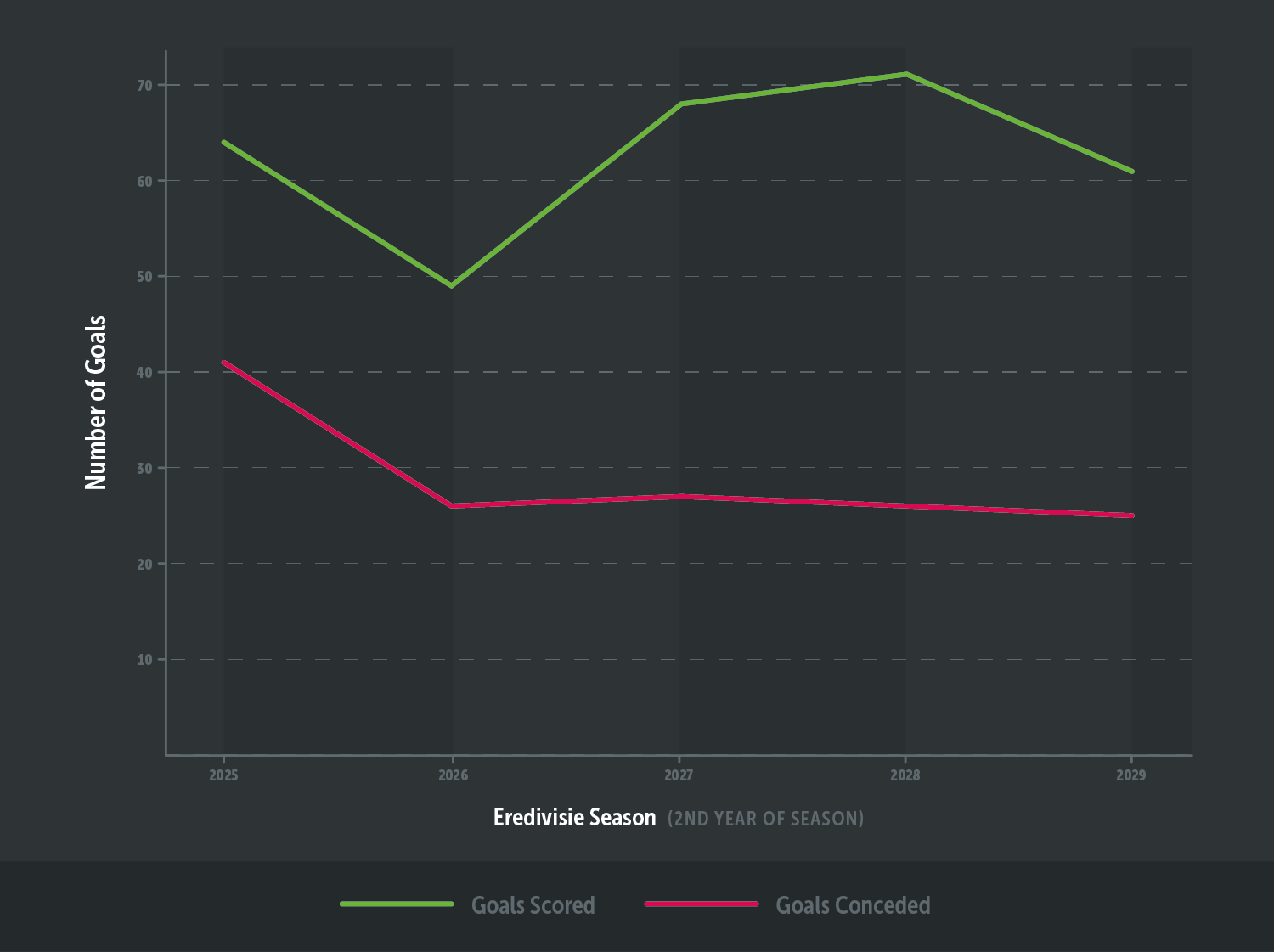 This tally of goals for and against covers the same period, and there’s definitely a relationship between it and the league table. The first season that we conceded less that thirty goals was our first in the top 4, and from then on, we were able to climb higher by bagging more goals. But it also exposes a stark truth: we’re solid at the back, but we need to score more goals to progress to the next level. 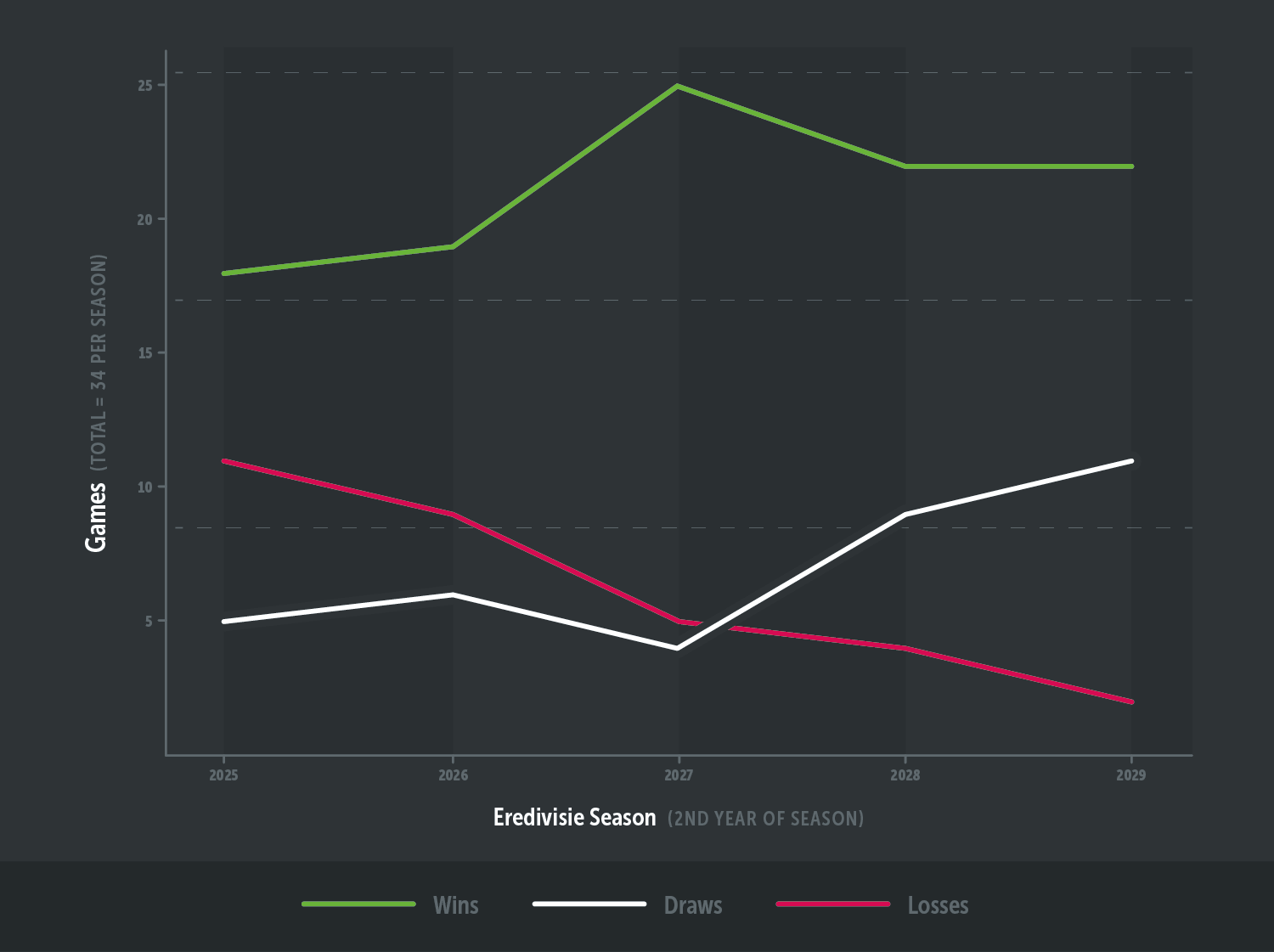 But goals for and against tell only part of the story, especially due to inflation from a record 9-0 win over Excelsior in 2028. Year-on-year, we’re losing fewer games per campaign. This is great, but our downfall last season was that we drew too many games. Turning them into wins will be key if we’re to replicate the (almost) runaway success of 2026-27.

‘Win more games’ seems like a very vague goal, but we can start to tackle the problem by looking at the games we drew last season. There were games against struggling sides who defended deep like Groningen, painful surrenders to last minute goals from mid-table regulars, and (as I mentioned in my last post) draws home and away to Ajax.

How we’ll break down teams that defend for their lives

I thought that might get your attention. There’s all sorts that we can do here in terms of reactive in-match tweaks to approach play, but I wanted to create an oven-ready version I could unleash at will on unwitting rivals. Meet Van Helsing … 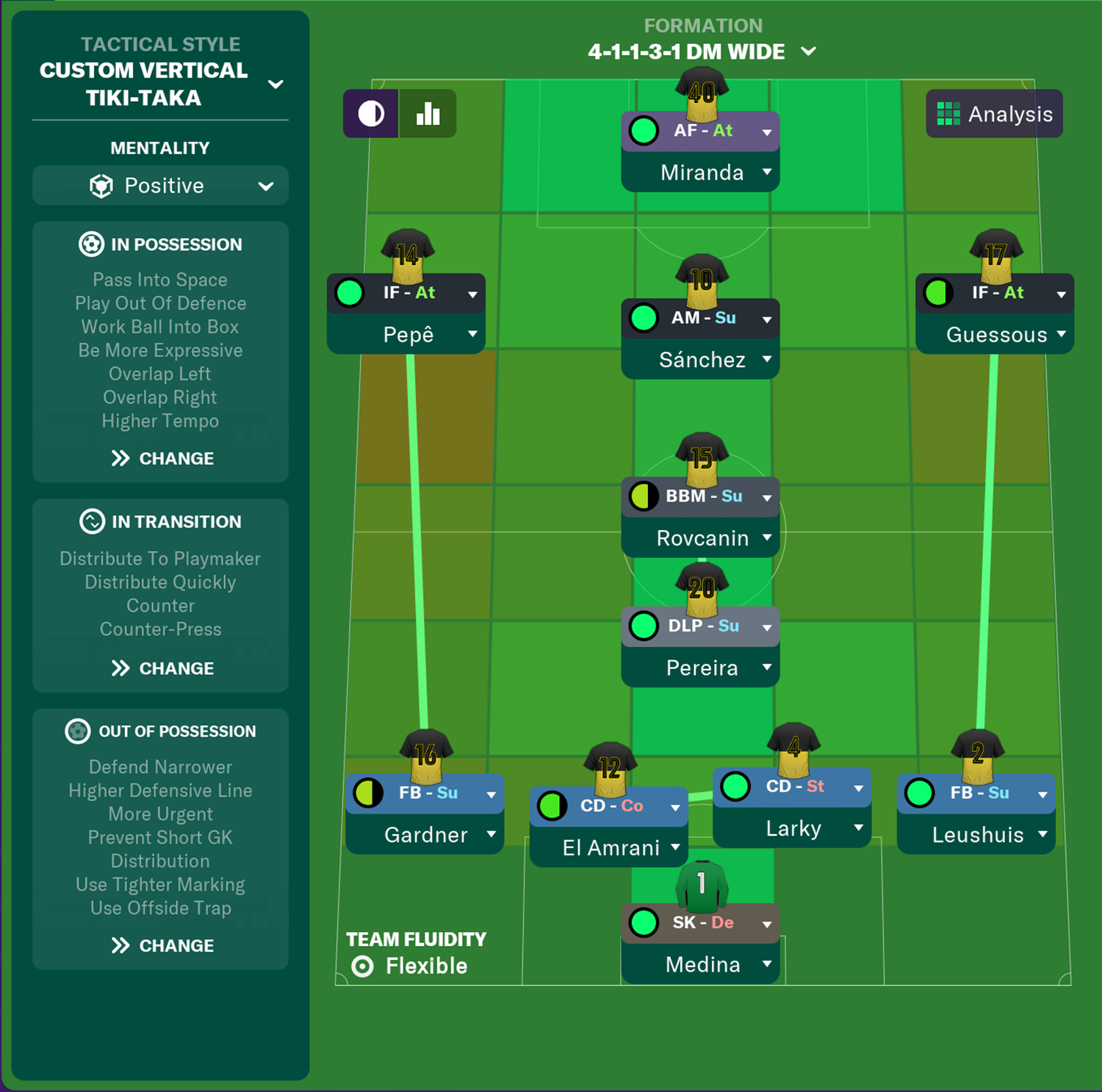 Its back four is similar to our standard Rodana formation, but with a higher line and more emphasis on the wingbacks to provide width. This setup’s key threat is the dynamic box-to-box midfielder at its heart – this individual has to play ‘either side’ to help out his DM, and also break forward to back up his AM. It’s a lot to ask of them, but it allows the front 4 to ‘go for broke’. The AM is an extra body, tasked with causing carnage between the lines and get on the end of crosses. In a nutshell, Van Helsing is all about upping the intensity and getting extra danger men into the box.

How we can stop conceding late goals

My standard approach when holding a slender lead was kind of simple: make the full backs more defensive, pull the back line back, then aim to hit directly on the counter. It worked at a lower level, and wasn’t so big a deal when I didn’t mind the odd draw. But a title challenge demands a more mature approach, which inspired the creation of Takapulco … 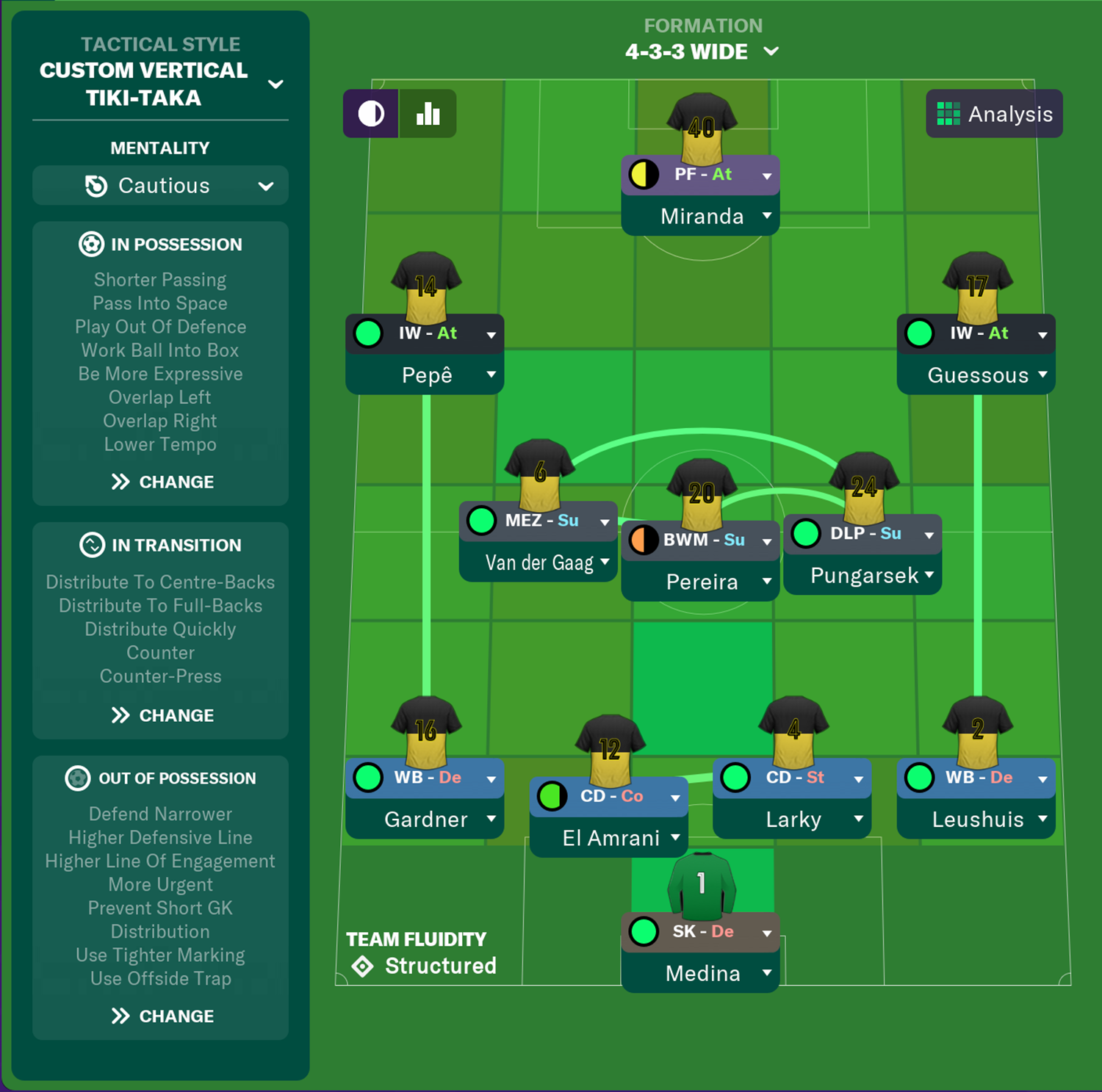 It subverts pretty much all of my previous approach. The defensive line stays high, with only slightly more discipline for the full backs. But the biggest difference is to mentality. Rather than keeping up the frenetic, direct style that’s served us to well, Takapulco is about patience and control: keeping the ball moving in the midfield, following the most important cliche in football, that your opponent can’t score whilst you’ve got the ball.

How we’re going to win the Title

To take home the trophy, we’re going to need to finish top of the pile. It won’t be enough just to beat the relegation contenders and perennial mid table sides. We also need to get the better of the teams at the top. We’ll be treating the four fixtures against Ajax and Feyenoord as cup finals – if we win more than half, I reckon we’ll be in with a good chance of clinching the title. 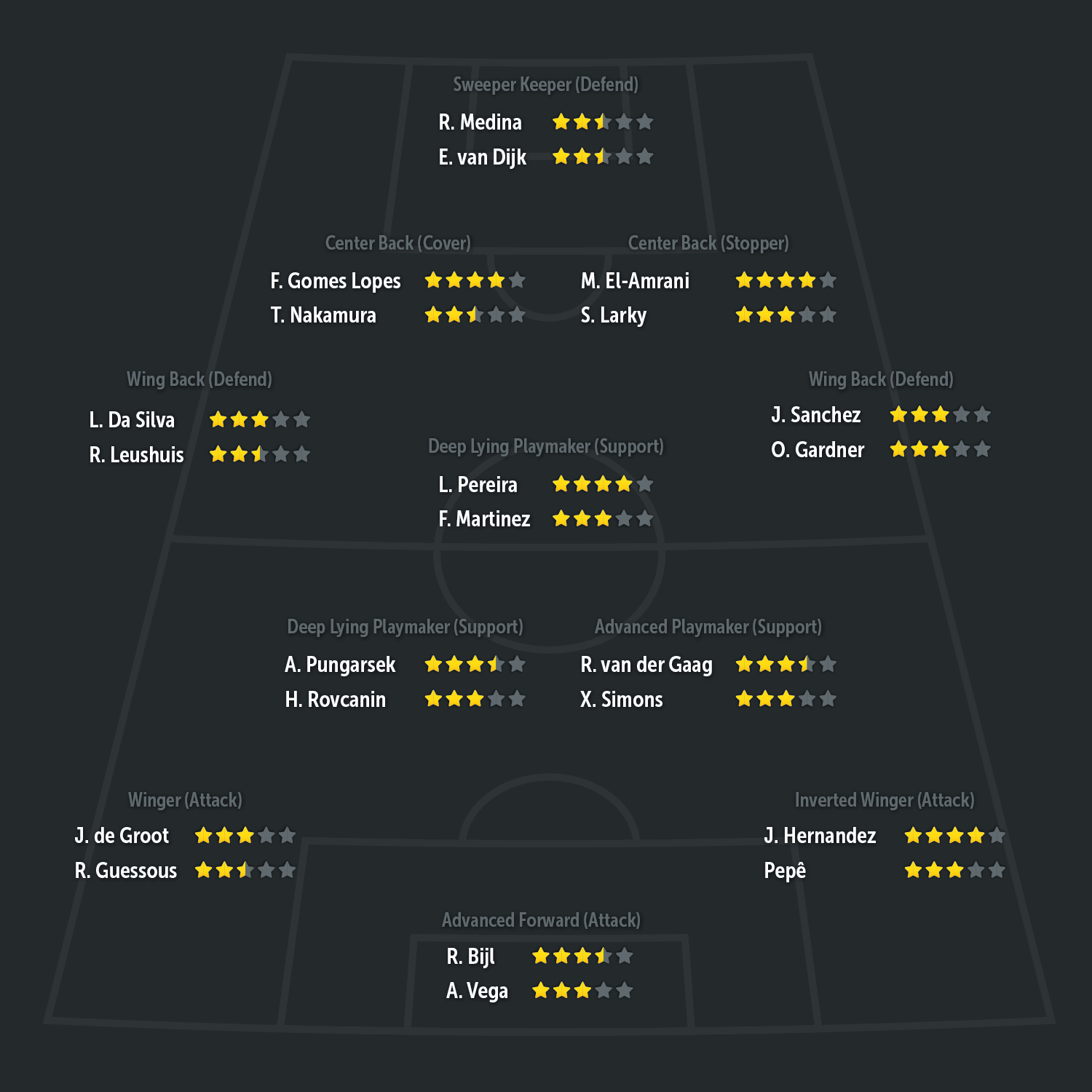 Consistency is going to be crucial. I’m also hoping to minimise the number of off days – those matches where your players hardly turn up or you drop points despite being the better team. The best solution I’ve found so far is to assemble two interchangeable XIs who’ll play “one game on, one game off” so there’s no chance of ‘rusty’ players messing up our rhythm, and everyone has chance to play their way into form. (We’ve actually been playing this way for 3 years already; the only change this season is that the League XI is slightly stronger, to give us the best possible chance of winning it).

I’ve always liked the idea of a deep-diving squad summary, so please indulge me as I introduce you to the lads who I’m hoping will make history in 2029/30. Flick through the sliders below to explore as much or as little about each of these characters as you like. Maybe let me know your favourites in the comments! 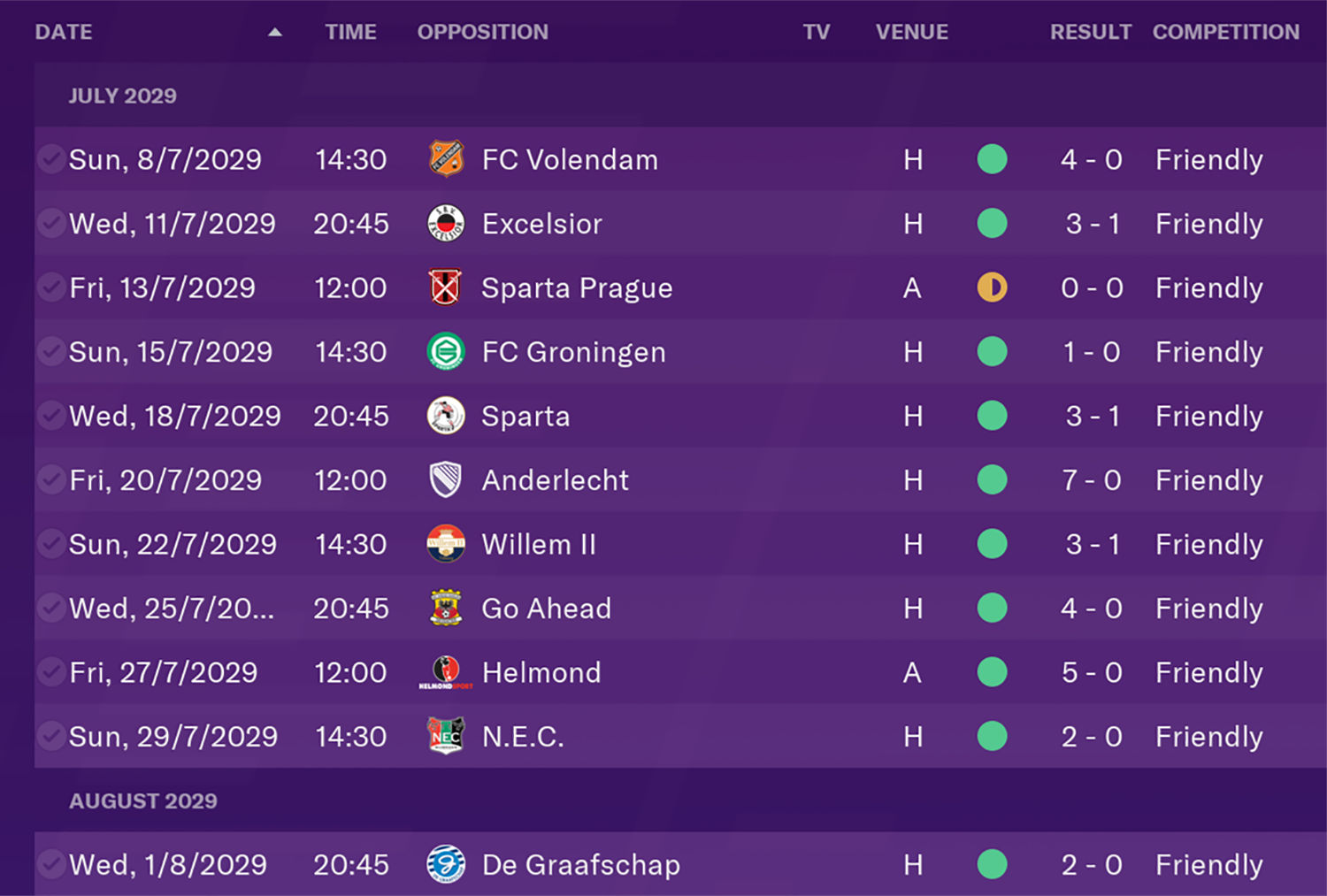 I promise I’ll have some actual gameplay for you next time around, but in the meantime, I’ll leave you with our bizarre preseason results. My assistant decided to schedule a load of extra games in addition to the brutal itinerary I’d already laid on. Still, it offered a great chance to test out our new tactics out against a wide range of opponents. Next time, we’ll find out whether they’re good enough to help us pick up the results we need in the Eredivisie…