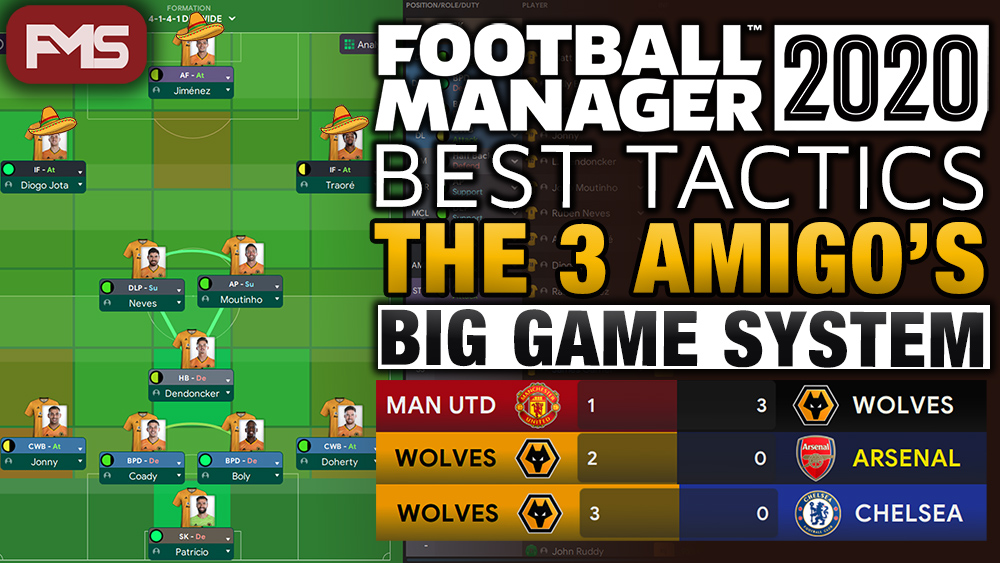 Hey guys, I’m back with another addition to our best Football Manager 2020 tactics, The 3 Amigo’s. Aptly named for its three pronged attack this is a potent, high pressing system focussed around high tempo counter attacks and offensive overloads.

I have recorded a Youtube video explaining how to use The 3 amigo’s from player roles, to tweaks and player suitability plus some gameplay and test results. You can download this Football Manager 2020 tactic from the bottom of this post.

The 3 Amigo’s are made up of an Advanced Forward and two Inside Forwards who share the offensive strain and should be well endowed in both speed and flair. ‘The 3’ look to force a mistake before striking hard with an attacking mentality, extremely high tempo and urgent press.

Each attack is supported by two complete wing backs, who overlap creating width while a deep and advanced playmaker connect defence to attack and shoot from range. A Half Back is used from DMC to add stability and sit in front of the back two.

With so many bodies committed to the attack your half back is vital in holding the defensive shape and can form a back three. Such an aggressive counter can leave space down the flanks which may be penetrated by teams who sit back and counter the counter, but hard working wing backs should help. I have included vital tips at the bottom of this post, please read on. 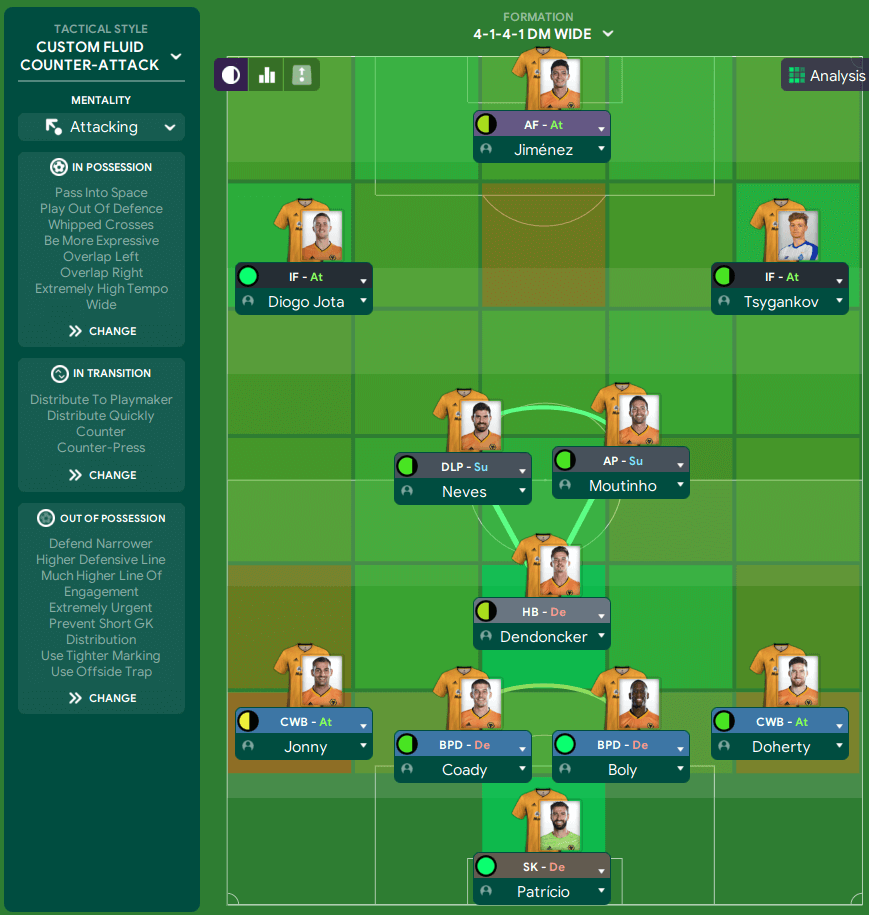 I have listed each role below followed by a description of the ideal player because suitability is vital to success.

GK – sweeper keeper (defend) – Just your standard goalkeeper but should be good in one on one situations and rushing out.

DC’s – ball playing defender (defend) – I look for a towering presence and speed to compensate the high line. Your DC’s will look to play out from the back so decent passing and composure would be ideal.

DR/DL – complete wing back (attack) – Fast, forward thinking wing backs will do very well in this system as they look to overlap. Speed, stamina and all round technicals are preferable but hard work is vital. A good wing back can transform this system. Doherty and Jonny were excellent for Wolves.

MCR – advanced playmaker (support) – The maestro, your advanced playmaker will pick out passes, work the ball forward and shoot from range. Excellent passing, vision, movement, decisions, touch and the usual green AP attributes are important. Good long shot ability will add a tonne of goals, I found Moutinho scored a number of goals arriving late in the box and from long shots.

AMR/AML – inside forward (attack) – Two of the 3 Amigo’s, your IF’s need speed, skill, dribbling ability, good finishing and great technique. Adama Traore was amazing off the bench with his dribbling and speed while Diogo Jota acted as a wide striker always cutting inside to sniff out a goal. Interestingly, Traore was used from the right despite being right footed scoring most goals arriving late in the box. Better used as a winger he brought a different dimension to the role. I would however recommend AMR is left footed and AML right footed.

STR – advanced forward (attack) – The main goal threat, good finishing is a must but speed is even more important. If you can find an all round striker with good aerial ability, great, but don’t let this sacrifice speed and finishing. Dribbling, technique, off ball movement and composure are important also. The AF needs to create his own opportunities and can be found in behind. Moise Kean, Diogo Jota or Raul Jimenez would work though the latter lacks slightly in speed.

You should not tweak ‘The 3 Amigo’s’ on a game by game basis, only mid-match as suggested below.

While The 3 Amigo’s was made to supplement Concerto in my Scarborough save, I did test it with Wolves. The results were fantastic especially against big teams where the stats speak for themselves. 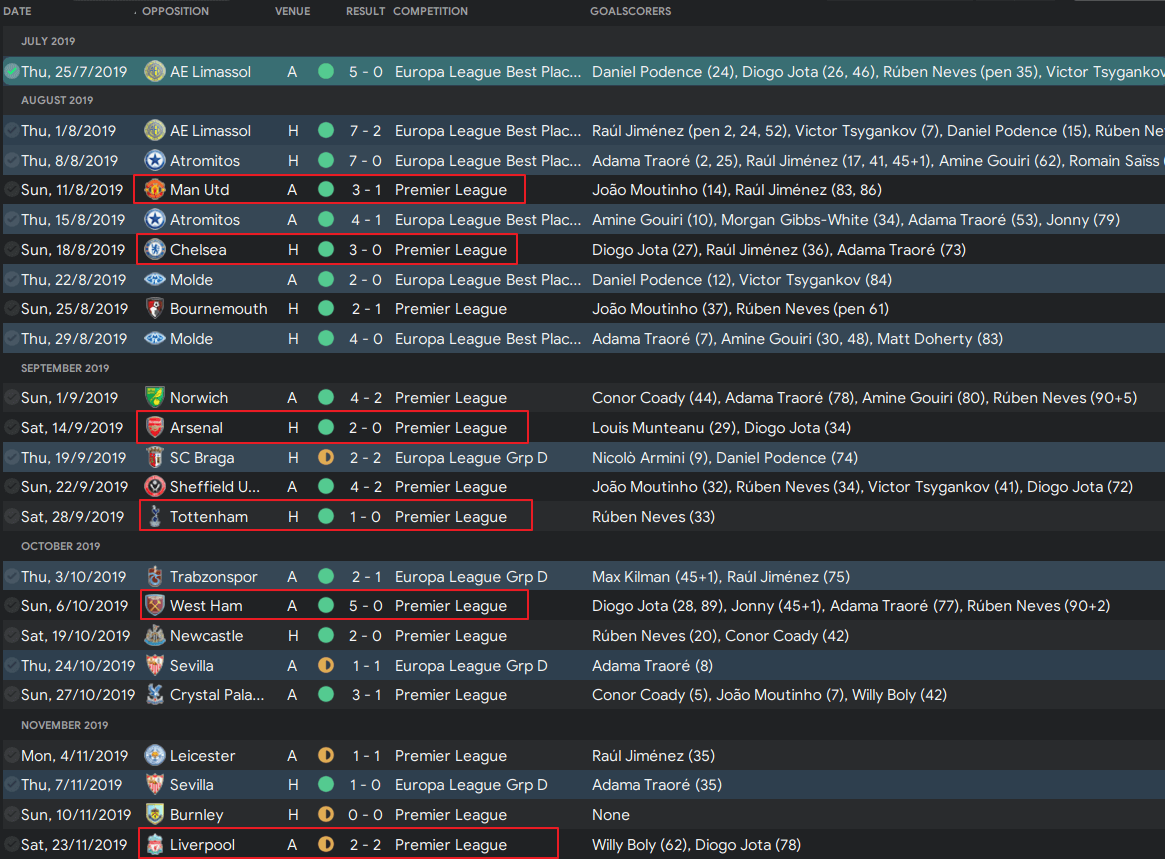 The screenshots below show our match stats against big teams which I found more impressive than the results themselves.

Screenshots below are from my maiden Premier League season with Scarborough. Those stats against Arsenal are insane.

Try our guides below to find, identify and develop the very best Wonderkids:

Thanks for reading, any social shares would be much appreciated. Follow us on social media for future posts in the series.

Why are u not using it for a full season?

If you mean for the test because I don’t have time. If you mean in general why I am not using it as my default tactic with Scarborough its because I prefer Concerto and like using two strikers, this was created to supplement that system during tough matches.

Nice write-up, Darren! Just wanted to add some of my thoughts, since I use a similar setup with my Roda JC team…

– If you’re playing against a system like this, and the other side’s got plenty of pace in behind, I normally tell my full backs to play as Wing Back (Def), with instructions to tightly mark them. That way, they’ll still get crosses in, but are less likely to be caught out at the back. If you’re a serious underdog, it’s probably best to move the defensive line back to ‘standard‘ rather than ‘high’ too.

– To really overload down one flank (say if you’re facing a poor full back or against ten men), focus attacks down that flank alone. If you want to really up the ante, I’ll turn the nearest CM into a Mezzalla (Att) and even move the lone striker towards that side. Biasing your striker can also be a good shout if you spot that one of the rival CBs is low on pace!

– When chasing games, I’ve developed a variation with ‘3 in a row’ rather than an inverted triangle down the middle: DM (DLP, Support) – CM (BBM, Support) – AM (AM, Support). If your number 10’s got plenty of flair, this can help unlock stubborn defences. Alternatively, a DLF (S) can work just as well if you’ve got a good one on the books.

– Occasionally you’ll come up against an awesome full back who can expose this shape’s flaws. A good wing back system (3-4-3 with touchline-hugging wingers) in particular can cause real problems. The best way I’ve found to counter this is to tell the wingers to man-mark the full backs, and even to change the DLP to a Carillero (S) with a man-mark duty on the full back who’s wreaking havoc. A hardworking, agile midfielder with good anticipation can work wonders in that role.

Hope some of these tips help! Would be cool to hear whether they do make much of a difference to your results if you’re making use of this awesome-sounding tactic.

Shameless plug: I’m gonna cover tactics and variations on these themes in more depth for my next Roda JC post, so keep an eye out for that!

Thanks for your thoughts mate, all very relevant. I certainly found the wings are a weakness against better opposition who double up and focus out wide. Using CWB on attack can leave you exposed in behind for sure…but changing this role from the off under commits to the counter and leads to even heavier pressure as a result when your attacks break down earlier. But its certainly something I’d change to a more supporting role if watching the ME and it becoming clear we’re struggling in that area.

The specific marking instructions is an interesting addition I haven’t tried. I personally stay away from that in general mainly because (in the past) I found it to nullify our attacking play taking the players focus away from his role and placing on defence…but in specific scenarios and especially when defending a lead (having already done the attacking job) this could be worth testing.

This was born out of Concerto, the false nine and second striker was moved back to DMC so I’d probably stick with that as a second option personally but if lacking strikers again your last point is worth noting.

I look forward to that tactical post mate, should make a good read!