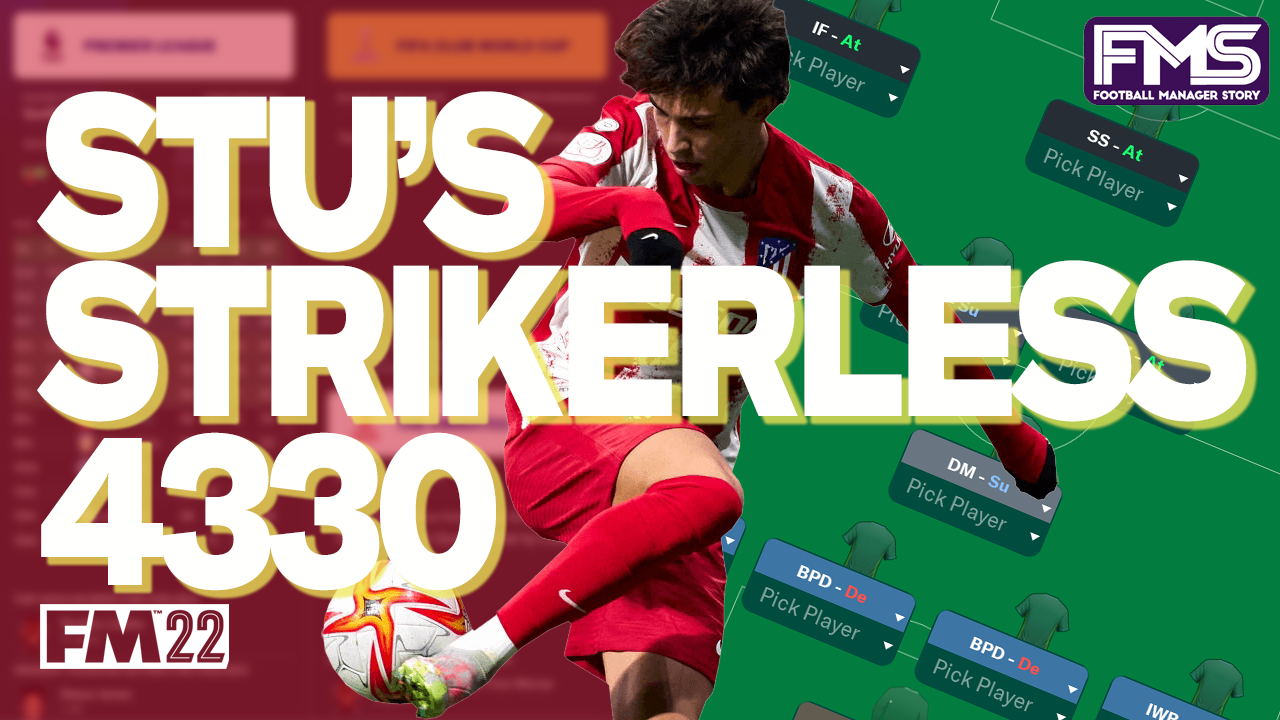 This week we will be testing our first strikerless system of FM22, submitted by one of our readers, Stu W. This Strikerless 4-3-3-0 was tested on V22.3 and will be compared to the best FM22 tactics.

This system was inspired by Pep Guardiola’s lack of strikers at Manchester City and was built to utilise their midfield power and look to stretch defences with movement and excellent passing. 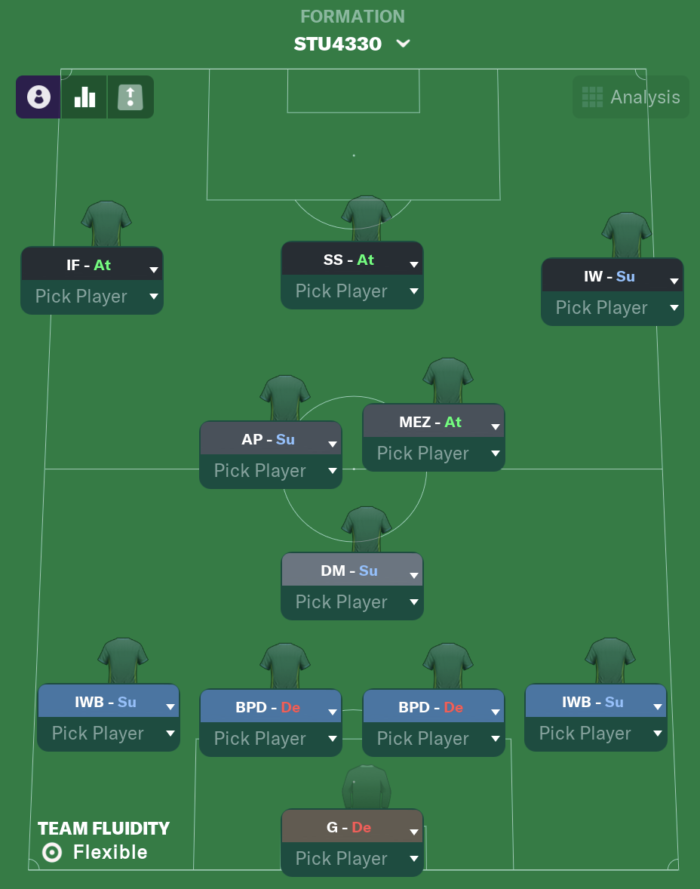 This is a 4-3-3-0 tactic. It is played on an Positive Mentality, with two Inverted Wing-Backs, an Advanced Playmaker on Support and a Mezzala on Attack. Up top you have a Shadow Striker flanked with an Inside Forward on the left and Inverted Winger coming off the right.

With the Mezzala pushing out wide on the right and the IW coming inside, you can see where the movement comes from and that Mez role would be perfect for Kevin De Bruyne. On the left, the SS/IF combo should provide a lot of danger, being picked out by the AP. 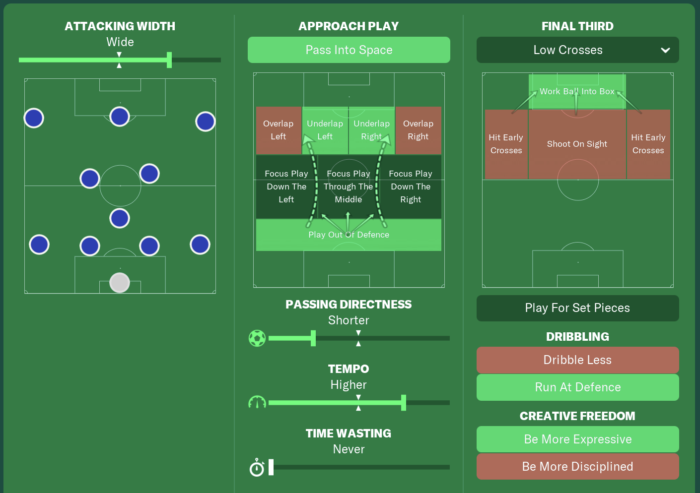 Playing wide, the important instruction is the underlaps. The creative players will constantly to looking to hit the runners coming from outside in.

Usually, with strikerless tactics, the Work the Ball Into Box option is crucial, keeping the team patient and exploiting the defenders who don’t know who to mark.

You are wanting the players to run at the defence, taking them on to create gaps and without strikers you do need an element of Expressiveness in the play.

It is a normal Gegenpress system, with the goalkeeper asked to distribute to the centre-backs. 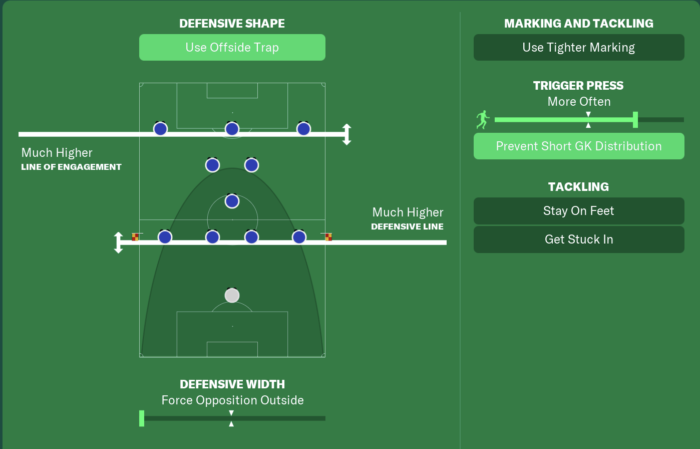 Both lines are set to much higher, but because it is strikerless, this doesn’t leave a lot of space in the middle for the opposition. With a narrow defensive width too and the counter-press selected, there is an urgency on winning the ball back.

In defence, both IWBs are told to ‘Take More Risks’ and the BPDs are told to push wider in possession, looking to get them open and create triangles.

The DM is told to Dribble Less, making him play the ball in a simple manner, leaving the creativity to the two men ahead of him.

Chelsea disappointed in the Premier League, finishing with just 75 points, but it was a strange season – Liverpool won the league on 77. It was in the Championship were the interesting results came.

It is not very often that Sheffield United have missed out on promotion during our tests, but we have also seen them win the league with 85 points. Yet, it was with Peterborough this tactic seemed to shine.

Sammie Szmodics led the league with 25 goals, firing the promotion candidates up to sixth and into the Championship Playoff Final.

Although they conceded 62 times, no one scored more league goals than Posh. An incredible return.

Sadly, promotion wasn’t to be, losing out 2-1 to West Brom in the final.

We have seen some great seasons for Jorge Grant already, but this strikerless system suited his passing brilliantly.

In the Chelsea squad, it would be interesting if controlling the team and actually picking the team – Romelu Lukaku didn’t play a single game – whether you could score more goals and win the league. Timo Werner and Kai Havertz scored 47 goals between them. The big Belgian striker could actually be the perfect SS if given the chance.

The perils of letting the Assistant Manager pick the XI.

With 74 goals, Chelsea were joint second top goalscorers in the Premier League. Thirty Eight goals conceded is a good return as anything around one per game is fairly solid.

This tactic scores 77.9 on our testing system. 280 team points puts it near the bottom of the results. 210 goals conceded has to falling mid-table. The caveat with strikerless systems is the AM not quite knowing how to pick the best team. Quite often you would pick your Centre Forward as the SS as the attributes are very similar and results could be much better.