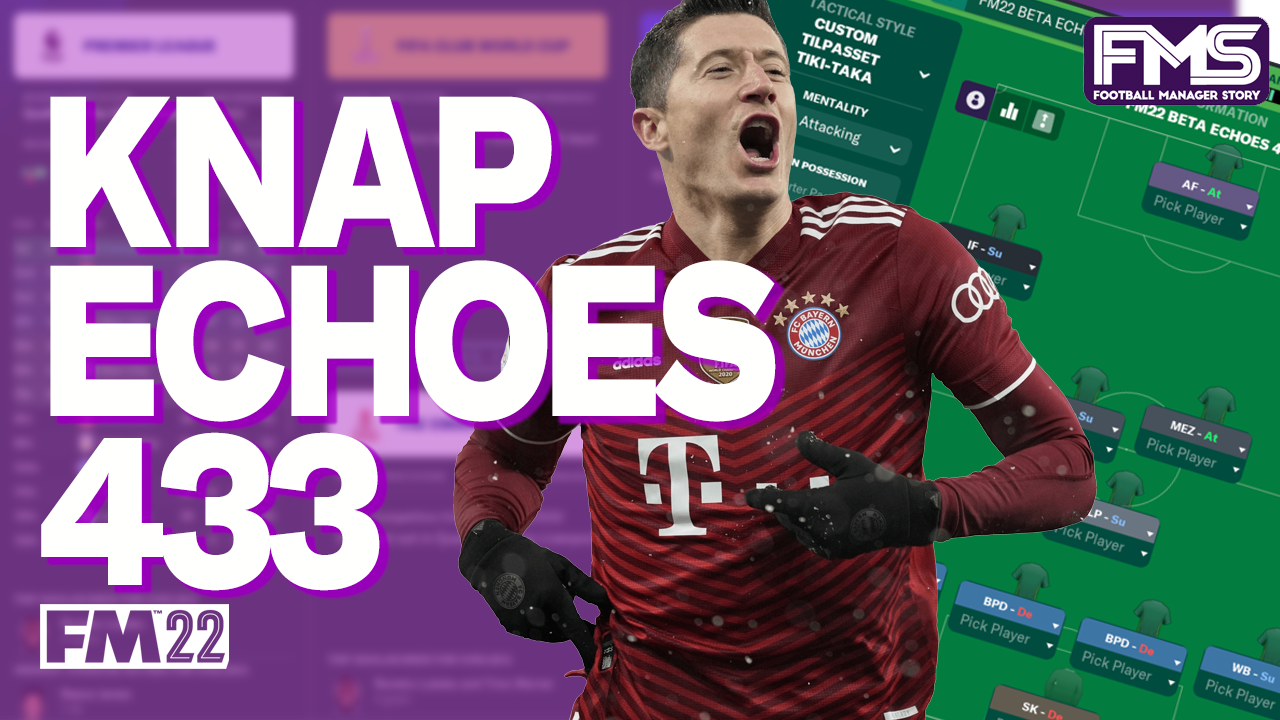 This week we will be testing Knap Echoes 4-3-3 Attacking system on FM22 v22.3 and comparing it to the best FM22 tactics.

Knap is easily one of the best know FM22 tactics creators and it felt the best place to start to do our first FM22 Tactics Test. 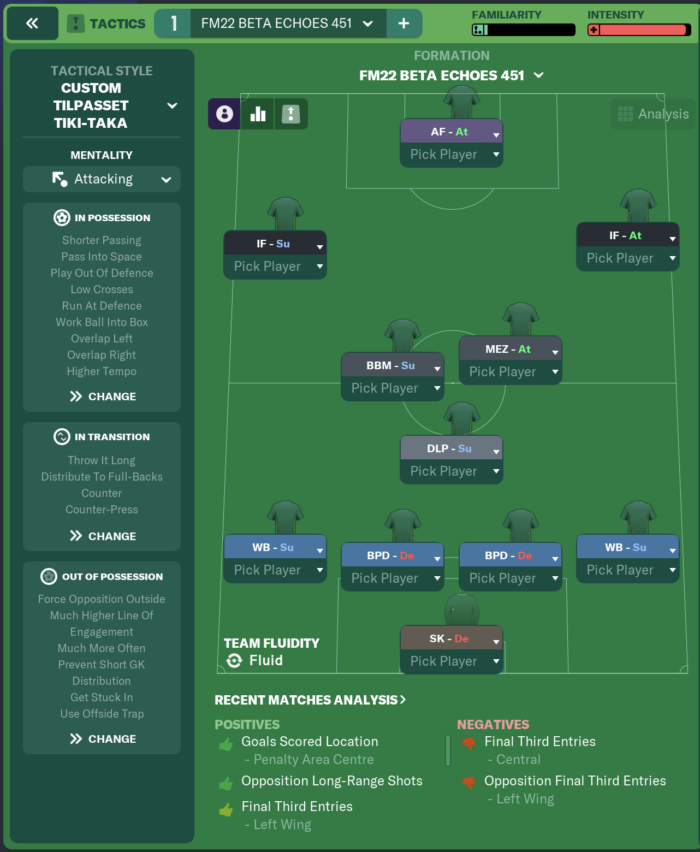 Echoes is a 4-3-3 tactic. It is played on an Attacking Mentality and uses the very popular combination of two Inside Forwards and the Advanced Forward.

In the midfield, the trio are tried and tested. The Mezzala on the right is on attack, asking him to get further forward and get in the box. There is a Box-to-Box Midfielder on the left, with a Deep Lying Playmaker on support at the base. There is nothing fancy about the Player Roles, so it should be able to support most sides.

At the back it uses two Wing-Backs on Support and two Ball Playing Defenders on Defend. They will provide the base and get the ball moving around and allowing the full-backs to push on. 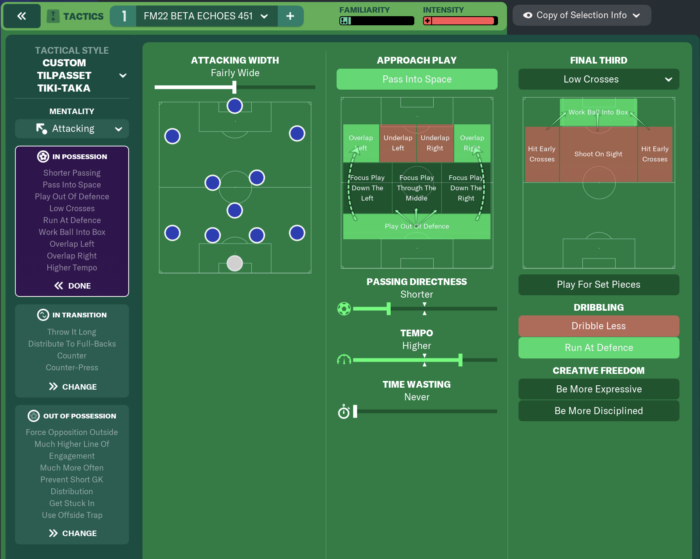 Using Overlap on the left and right will ask the team to wait for the wing-backs to get up the pitch, taking the space left by the Inside Forwards.

The triangles made by the 4-3-3 should work well with the shorter passing and the higher tempo. Then instructing the players to work the ball into the box emphasises patience in the final third.

As with most Knap tactics, it is a gegenpressing system, so Counter and Counter-Press is selected.

Interestingly, Out of Possession, we are pressing with a Much Higher Line of Engagement, but the defensive line is Standard, with an Offside Trap. They start deeper, but look to step up. It is an different combination than what you usually see.

Pressing is Much More Often and the players are to Get Stuck In.

Every single player has been told to Tackle Harder and Mark Tighter. The DLP, BPD (left), and the IFs are instructed to pass the ball shorter. This should provide more possession and look to pick the right pass rather than rush on the Attacking mentality. 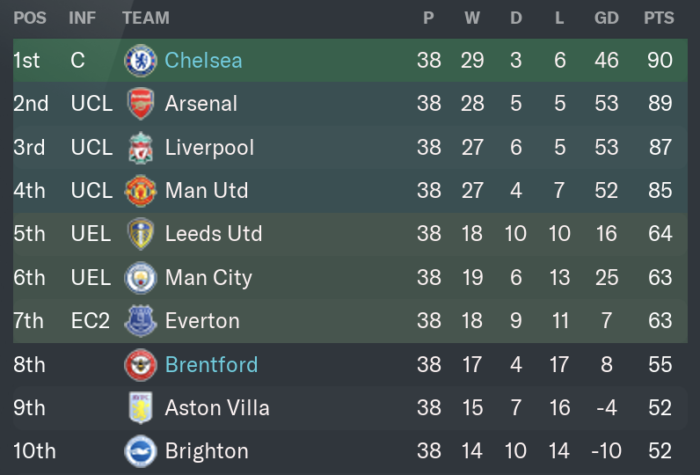 Chelsea won the Premier League by a single point. Arsenal drew 1-1 on the final day, helping the Blues lift the title. More importantly, they won 29 games and lost six.

80 goals saw them finished as the third top scorers in the league and they had the fourth best defensive record, conceding 34 times.

Brentford did amazing, coming 8th with an impressive 62 goals and finished midtable defensively.

Romelu Lukaku scored 21 league goals, with Ivan Toney finishing with 20 goals. Mason Mount led the league in assists. Sergi Canos from the Bees was only one behind on 14. Canos played in both Inside Forward roles. 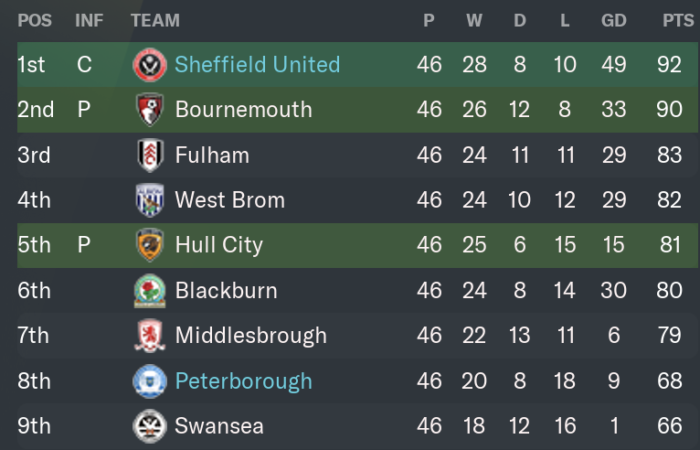 Sheffield United won the Championship, as they are predicted to do, but 10 defeats is concerning. Peterborough, like Brentford, outperformed their predicted position, finishing 8th, they are supposed to be relegation candidates.

The Blades were top scorers with 96 and the Posh amazingly fifth with 74. Although with 47 conceded, Sheff U had the 5th best defence, but anything around one per game is excellent.

This tactic scores 88.7 on our testing system. 305 team points has it in the top five (at the time of writing). Outside that rank for goals scored. Averaging 1.86 goals per game is what lets it down ultimately. However, 200 goals conceded is one of the best performances we’ve seen.