The city of Dresden has close ties to the early development of football in Germany. In 1878, English workmen founded Dresden English Football Club, which was very likely the first football club in Continental Europe. (A variant of the game itself had only reached Germany a few years earlier through teacher Konrad Koch, who did not found a team in his hometown of Braunschweig, though.)  Members of this DEFC in 1898 founded a new team, Dresdner SC. This was in the right place at the right time: In 1903 the first German football championship was contested. At the time, German football ran a system of regional divisions whose champions would then go to determine the nation-wide champion through a series of knockout rounds. Dresdner SC won some local titles, but never made it to the national finals early on. 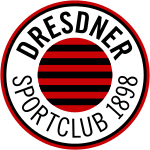 This changed in the late 1930s when they emerged as the dominant team in Central Germany and entered the final rounds of the German Championship a couple of times. They won the German Cup (Tschammer-Pokal) in 1940 and 1941 and were crowned champions of war-torn Germany in 1943 and 1944. The team was captained by Helmut Schoen, who also played for the German National Team at the time.

When the war ended in 1945, the Allies divided Germany into four sectors (one for UK, US, France, and the Soviet Union). As the Nazi party had made sure that all areas of public and private life are aligned with its ideology, the Allies disbanded each and every company, club, and sports team in the country. While in the western sectors, sports clubs essentially just had to re-register themselves, the Soviets grabbed the opportunity to restructure sporting life in line with their socialist ideals. Sports teams were a means to ensure the physical health of the workers. Many new teams were created as so-called “Betriebssportgemeinschaft” (Factory Sports Union) and tied to either local economy or socialist party organizations. Dresdner SC ceased to exist and its successor was named SG Dresden Friedrichstadt.

Not aligned to a specific socialist organization, officials still saw the club as “burgeois” and a remnant of the old times they so eagerly wanted to get rid off. As the team still hosted most of the previous Dresdner SC players (including Helmut Schoen), they easily qualified to participate in the Oberliga’s inaugural 1949/1950 season. During that season they played as title contenders and it all came down to a final home match against Horch Zwickau. Zwickau won the match 5-1 and the Dresden team and fans complained heavily about being unfairly treated by the referee and the Zwickau team. Dresden fans invaded the pitch multiple times and the police had to resolve the situation by use of force. The outcome: Zwickau were crowned the first GDR Oberliga champions and the socialist government had eventually found a reason to dissolve SG Friedrichstadt once and for all. 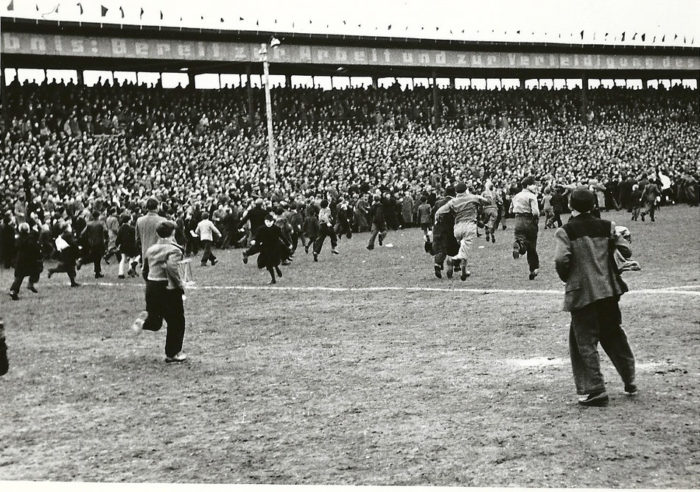 Pitch Invasion at the match between SG Friedrichstadt and Horch Zwickau (Source: https://www.dsc-museum.de/)

Going from there, Dresden football was “taken over” by a new government-sponsored team SG Volkspolizei Dresden, which later was rebranded to SG Dynamo Dresden and became one of the most successful teams in GDR football. Most players of SG Dresden Friedrichstadt moved to Western Germany after the dissolution of their club. Helmut Schoen went into management and became assistant manager of the West-German national team in 1956 before being promoted to the head position in 1964. Under his reign, Germany won the 1972 European Championship as well as the 1974 World Cup, finished runners-up in the 1966 World Cup and the 1976 European Championship, and was part of the “Game of the Century” against Italy at the 1970 World Cup. 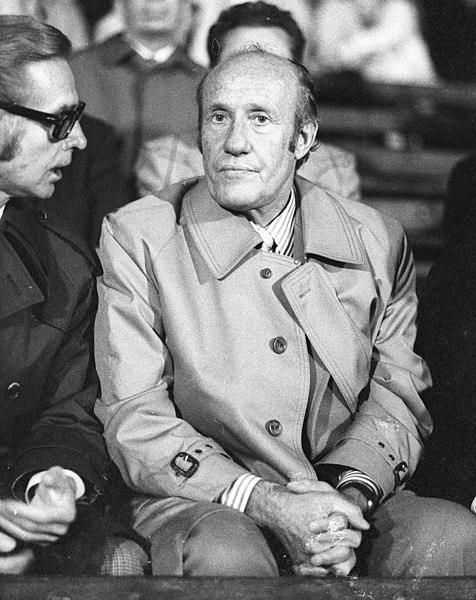 Helmut Schoen during his time as Germany’s national manager

Welcome back to another season at the Leipzig Leftovers! Last year we managed to finish 4th in the Regionalliga North-East. We also won the Sachsenpokal, allowing us to enter the first round of the DFB Pokal this year. In expectation of the accompanying financial windfall, the board also increased our wage budget to 69,000 EUR / month. I used the summer to finally restructure the squad – some dead wood contracts expired and we could go and sign players that fit into our system and help us move forward. 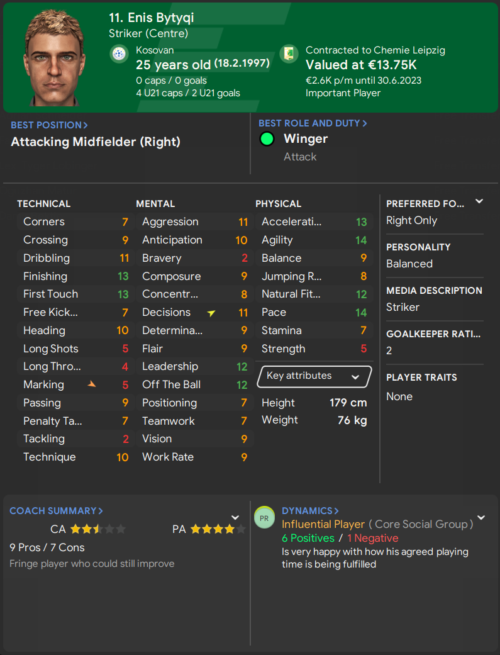 Enis Bytyqi joined us on a free transfer from TSV Steinbach where he had scored 14 goals in last year’s Regionalliga Suedwest. He was able to continue this form for us and eventually delivered 15 goals in 30 appearances this year. 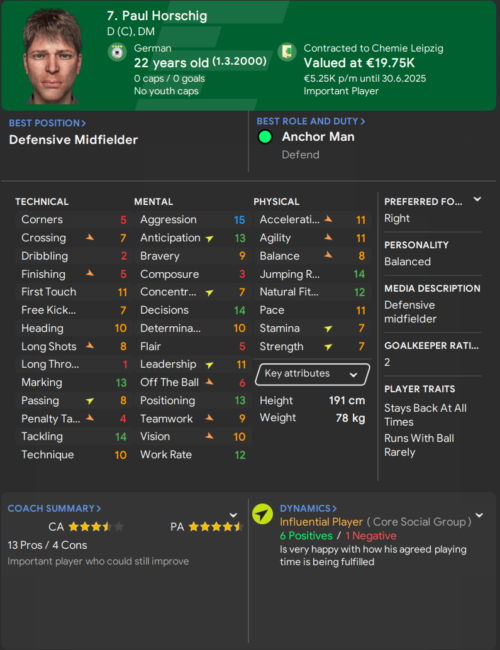 Paul Horschig joined on a free from division rivals Auerbach. I originally wanted him to play in defense, but it turned out he also made a great Anchorman and this is where he played most of his 32 matches this season. Given his age and potential I’m hoping for him to become a backbone player for our eventual entry into 3. Liga. 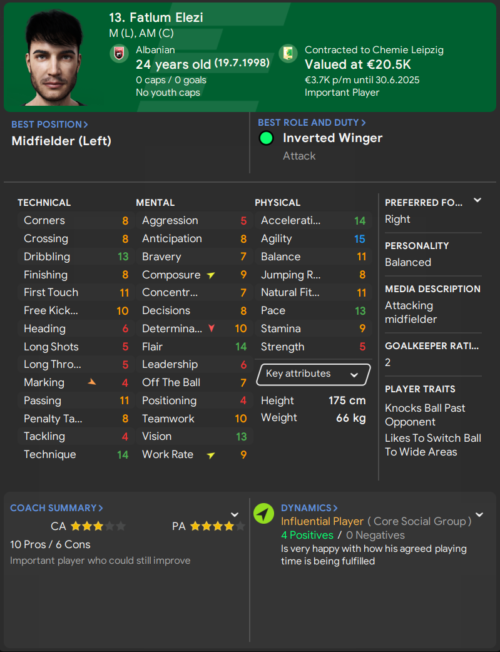 Fatlum Elezi was released by TeBe Berlin and we jumped on the chance to grab him. He had been TeBe’s main creative threat in midfield and went on to play 27 matches on our left wing. 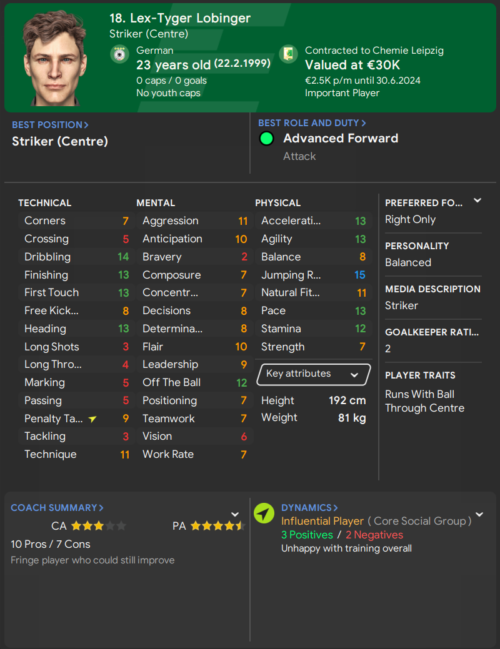 Bytyqi ended up scoring quite a few goals in the first half of the season. During the winter break this got me worried – what if he got injured? We were lacking a backup, so come the January transfer window we signed Lex-Tyger Lobinger, who had been released by Fortuna Duesseldorf in summer and had been unable to find a new team. He managed to deliver 5 goals in the remaining 10 matches he played in the league and is looking quality for the next years.

Last year’s Sachsenpokal win put us into the 1st round of the DFB Pokal. As semi-pro team we were going to get a home match against a bigger team. The draw gave us a visit from Bundesliga side VfL Wolfsburg. 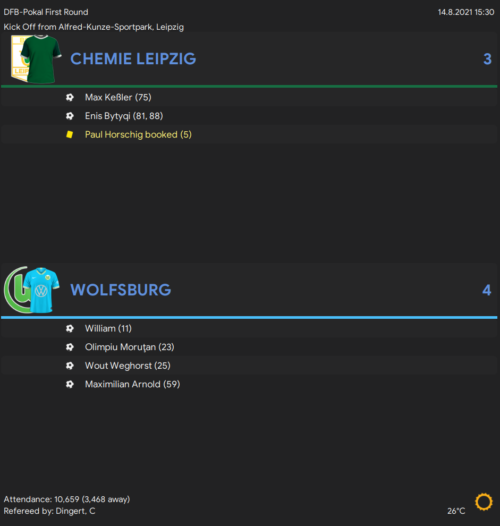 Trying to keep things tight in the back did not work out as planned. We were down 0-3 after 25 minutes and they made it 0-4 early in the 2nd half. At this point I told my boys to just push forward and try to get a goal at least. Interestingly, we even scored three of them. And 3-4 against a Bundesliga side is a result that we can certainly live with.

Even better: on top of the 175,000 EUR participation money our match was also broadcast on TV. This gave us another 550,000 EUR. This cup appearance is pure gold. We paid off our debts. Our current positive balance is going to keep us afloat for the rest of the season. I could not be happier from the economic perspective.

The financial gains from our DFB Pokal match are a great motivation to do it again – win the Sachsenpokal and stay rich next year.

Last year we were lucky to get past lower-league teams until facing 3. Liga winners Dynamo Dresden in the final. We weren’t as lucky this year. Coasting past lower-league Rabenstein and Dresden 06, we were drawn to face FSV Zwickau in the quarter final. As a 3. Liga side they were top favorites to win the cup. We fought bravely, but eventually lost out 0-1. No DFB Pokal for us in 2022/23. 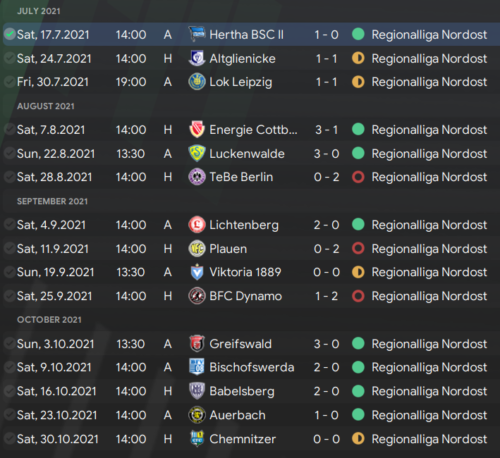 The season’s title: Lack of consistency. This did not only apply to us, but to a few other teams at the top as well, leading to up to 8 teams challenging for promotion with no strong suitor emerging.

We started with a 5 game unbeaten streak before we lost a couple of matches in August and September. We managed to make up for this in October by not conceding for five matches straight. This was good enough to get us into 2nd spot with just fewer goals scored than league leaders TeBe Berlin.

But that standing would not be the craziest all year.  Every time we won we got closer to the top, but we also picked our range of losses. So did everyone else… 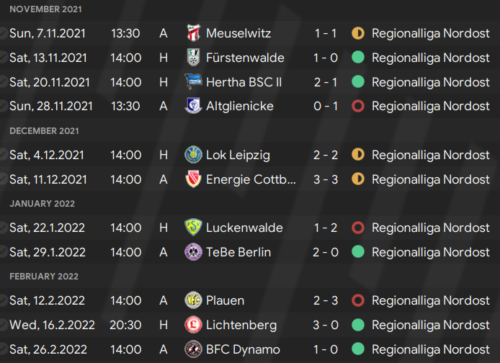 Our middle of the season was mediocre. We were lucky to draw against Lok and Energie in December. We lost the crucial home match against Luckenwalde. On the other hand we bet TeBe, only to lose against Plauen who were sitting in the relegation spaces. Still, by end of February we were 3rd with one match less. A win in the extra game against Viktoria would put us up top.

We only drew against Viktoria, but then won the next three matches. Again, our defense saved the day.

With four games to go we were in the top spot! 3 wins out of 4 might suffice.

But then we only drew against Auerbach before winning narrowly against Chemnitz and Meuselwitz. On the last day we’d need at least a draw against Fuerstenwalde to win the league, otherwise we might lose out on goal difference against Viktoria. We lost that match. But Viktoria failed to win their match. I was a nervous wreck, but we had won the title! 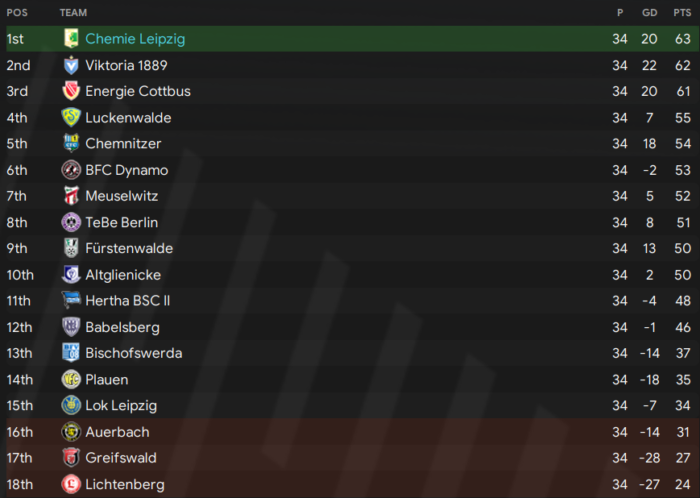 Being Regionalliga champions is one thing, but being promoted is an entirely different story. Remember how I told you last time that there are 4 promotion spots for five leagues? Well, this year our division’s turn was to play a promotion playoff rather than directly promote their champions. So we would face the B team of VfL Wolfsburg (what a coincidence given our DFB Pokal match against their pro team!). We first met them at home and won 1-0 through a Fatlum Elezi goal. Then we traveled to Wolfsburg and they managed to equalize on aggregate. So the game went into extra time. And then into penalties. 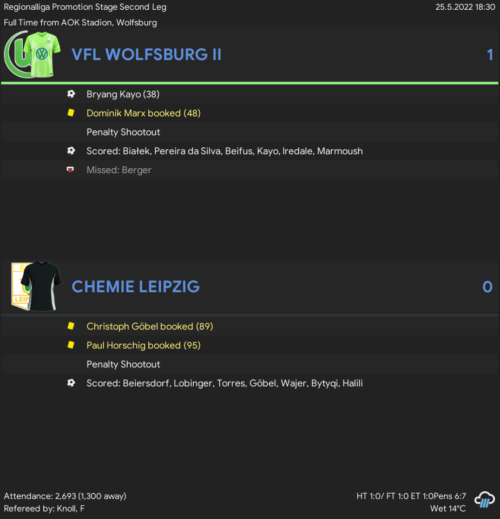 And so, on a rainy May day in 2022, we scored our penalties while the 7th Wolfsburg attempt was saved by our goalkeeper. We are going places and will be playing in the 3. Liga next year!

Quite good progress here. We are out of the Regionalliga after two years and obviously we were very lucky here. 3. Liga is a professional league, so we are going to turn professional this summer. Other than that, thing won’t change dramatically. Our wage budget of 1 million EUR for the next year is less than half of what other 3. Liga teams are spending. Still no prize money or other major sources of income in sight. So we’ll likely have to battle against relegation while hoping to qualify for the DFB Pokal through winning the Sachsenpokal again. It’s not going to be boring!