After the great first three seasons of the Gateshead to Glory story, now it’s time to face the next step up, the Sky Bet League 1.

If you haven’t read the previous posts, here a quick recap:

Second Season: We lift the FA Trophy Cup and the Vanarama National League without loosing any games with 122 points in 46 matches.

The board asked me to reach the 2nd round in this competition. We made it to the 4th round, where Premier League team West Ham eliminated us on penalties… 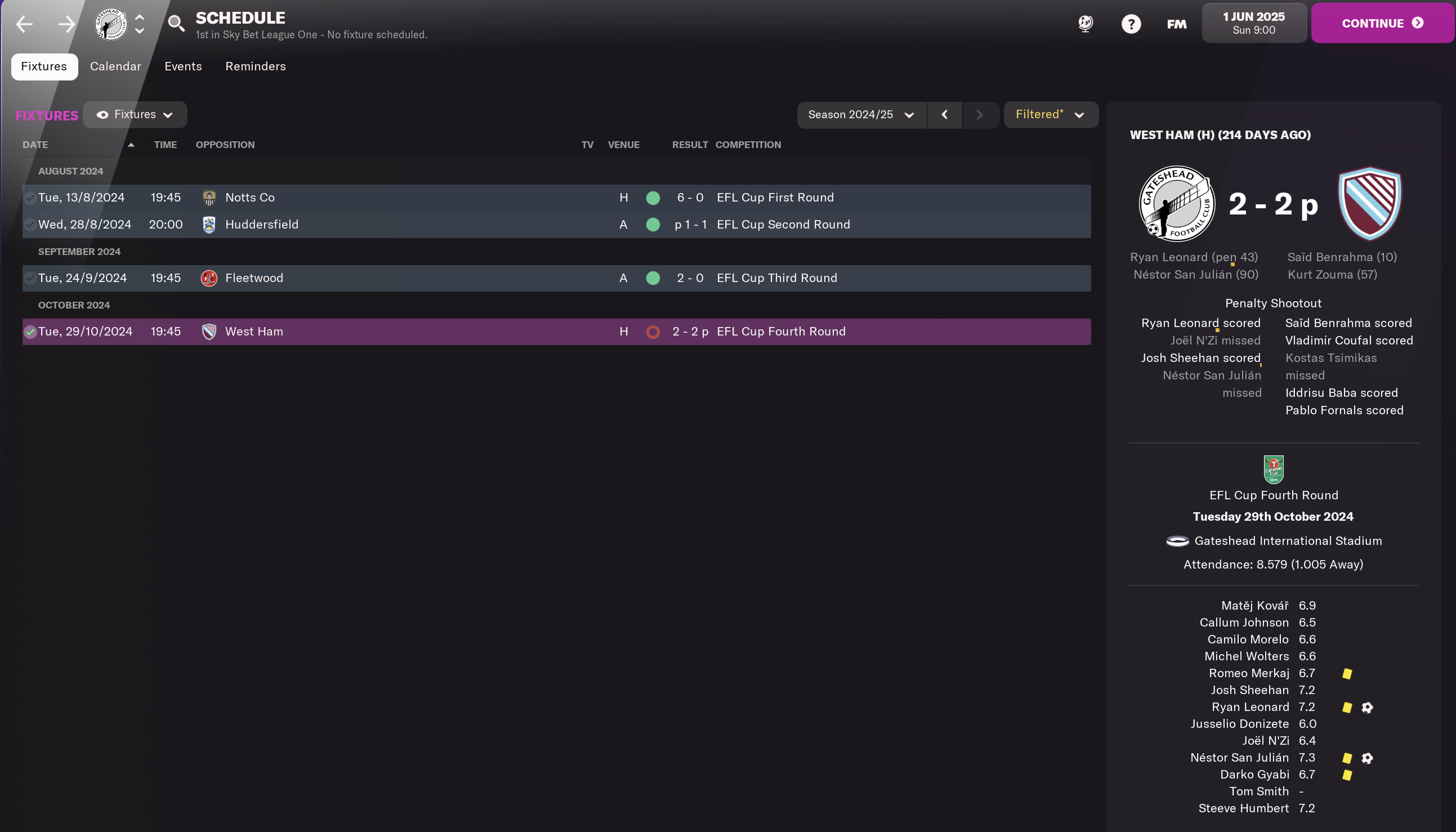 The board expected me to make it to the third round.

We made it to the 3rd round, and got knocked off by Premier League team Leicester for 1-4. 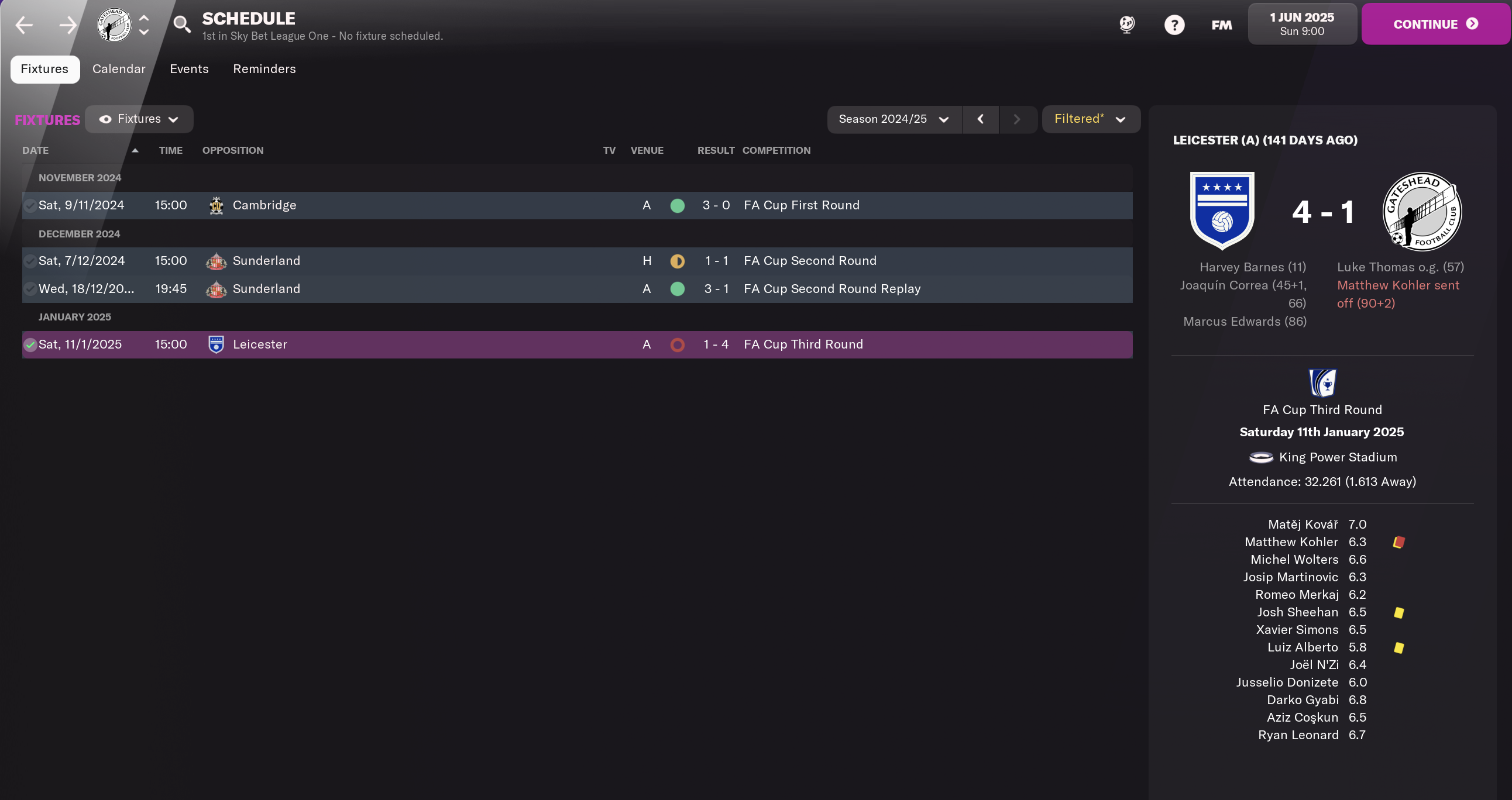 We won the Papa John’s Trophy in front of 60k people at Wembley Stadium defeating Birmingham for 1-0 in the final!

Once more we did incredibly well, over performing the initial expectations set on us by the board, odds and media…. 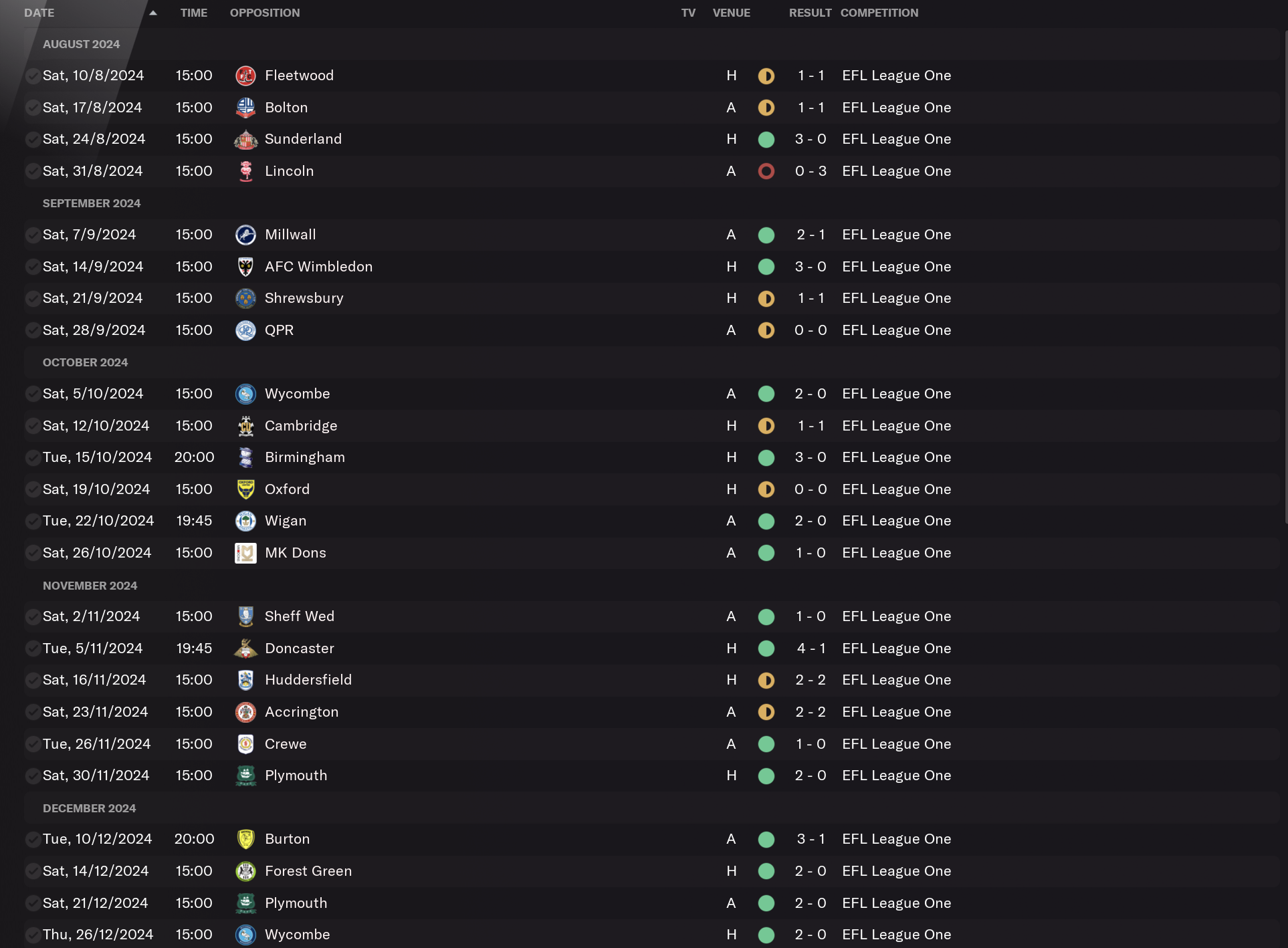 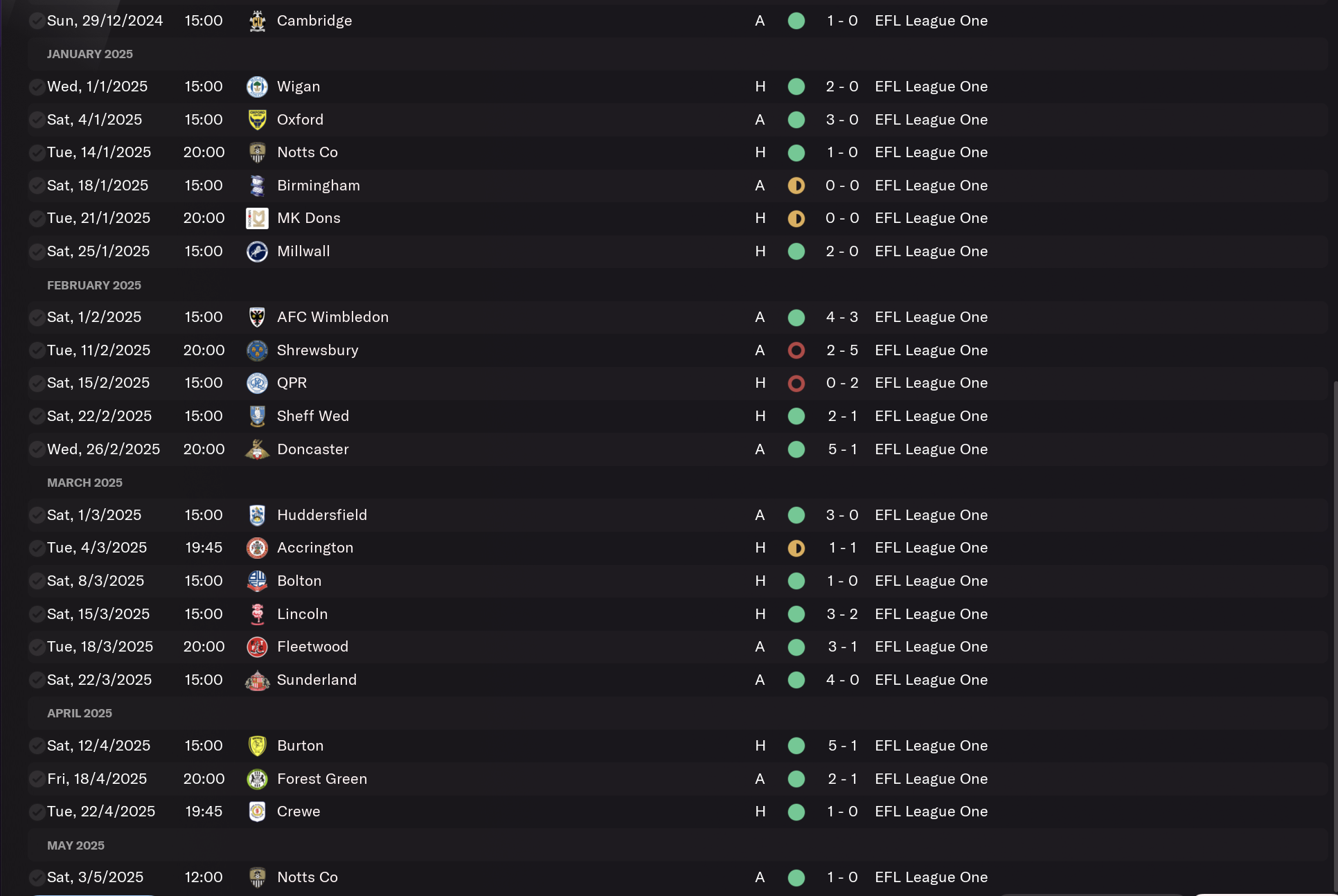 The Sky Bet League One Table

I managed Gateshead to it’s 4th promotion in a row while winning every league!

The next Season the Sky Bey Championship awaits us…. 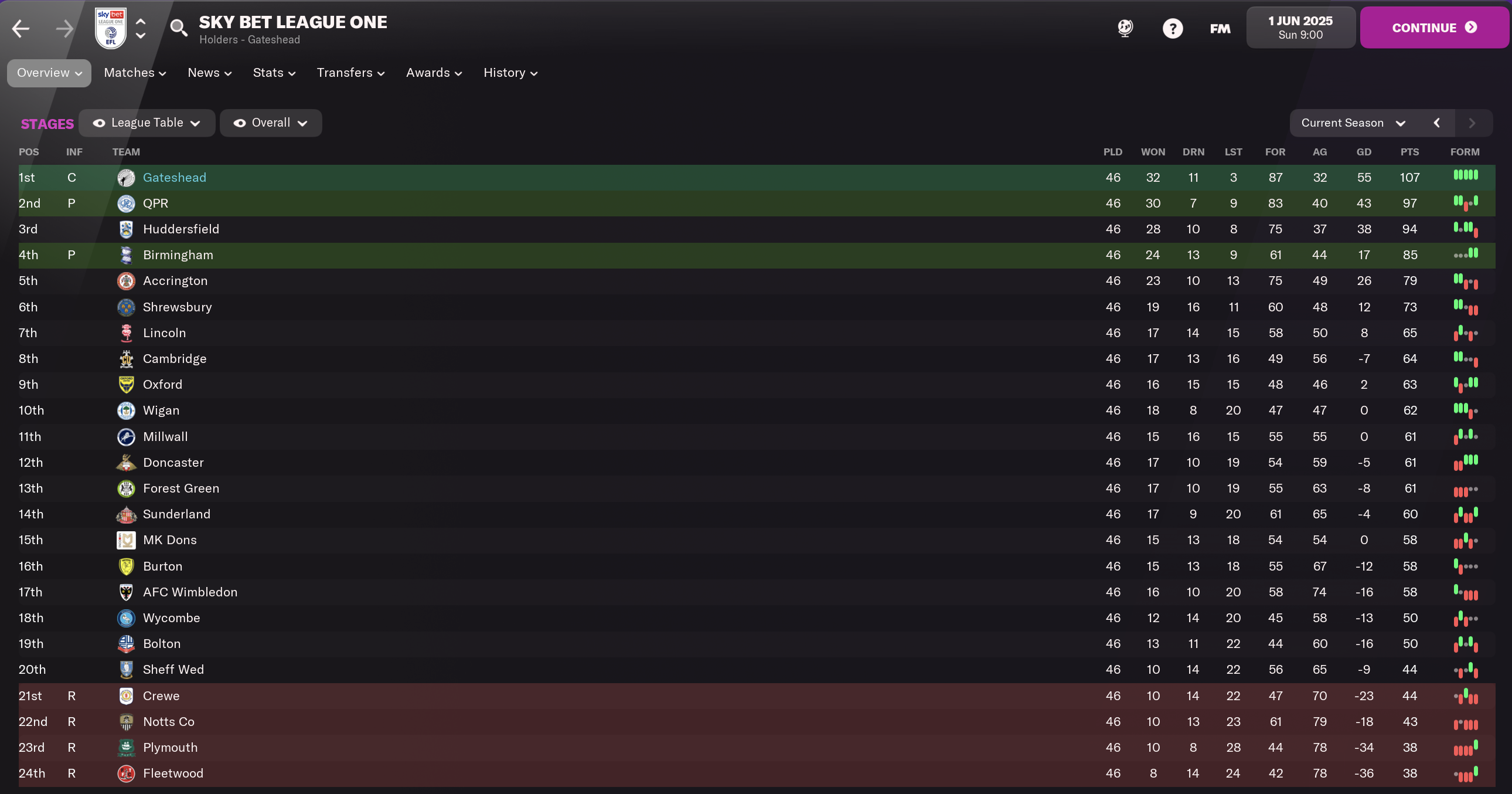 Pre Season and End of Season

With odds of 50-1, we were predicted to finish in 19th position, which was understandable since we were recently promoted.

The odds table is a thing that I always pay a lot of attention throughout every season in all my saves. I find it the fastest and easiest way to gauge my team strength and development compared to the rest of the other clubs in the league.                                  By the end of the season we moved up to the 5th position with 5-1 odds.

To me, this means that many of my young players improved a lot and that the players I signed during the season made us a much better than we were in the pre season. 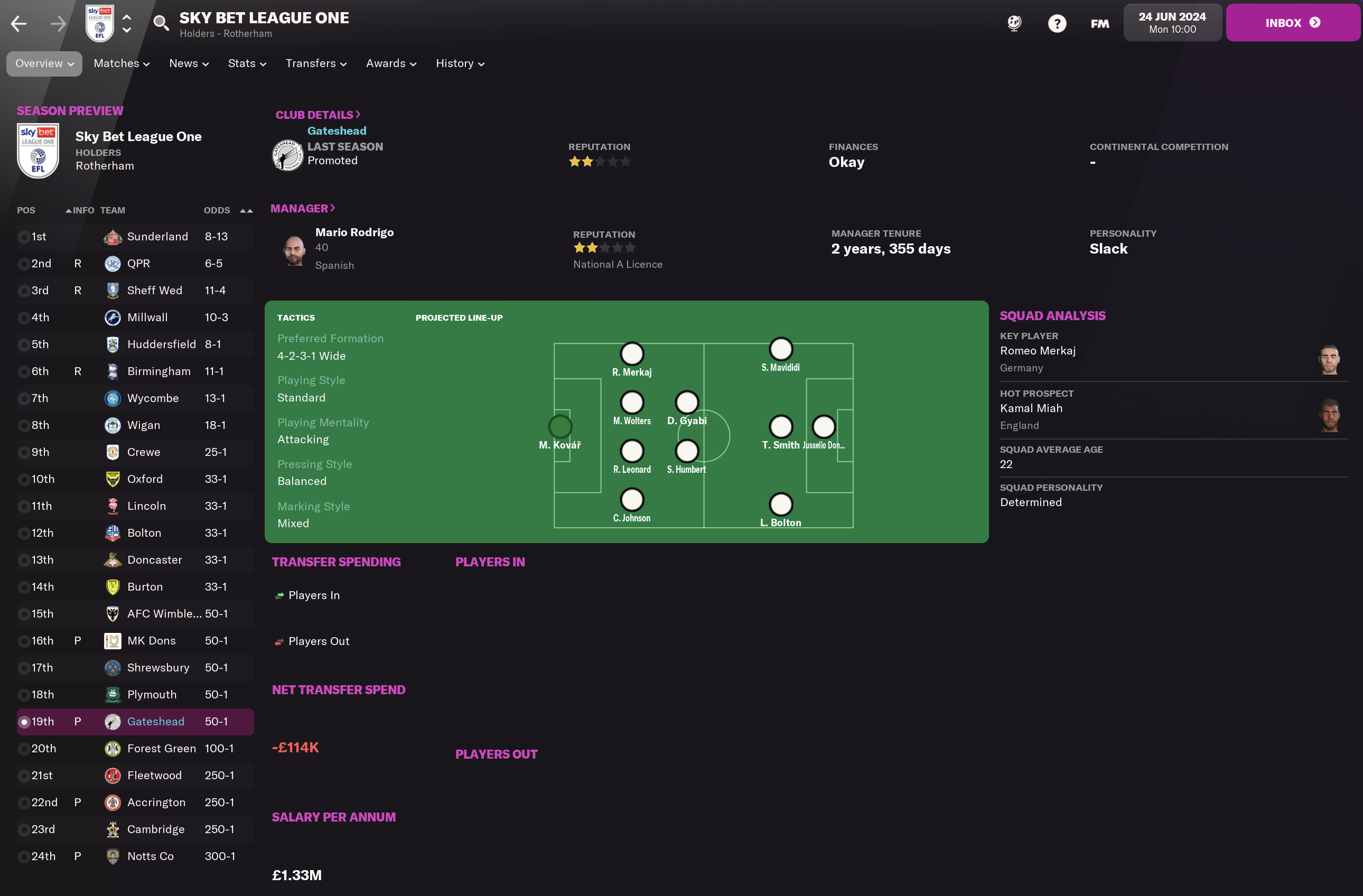 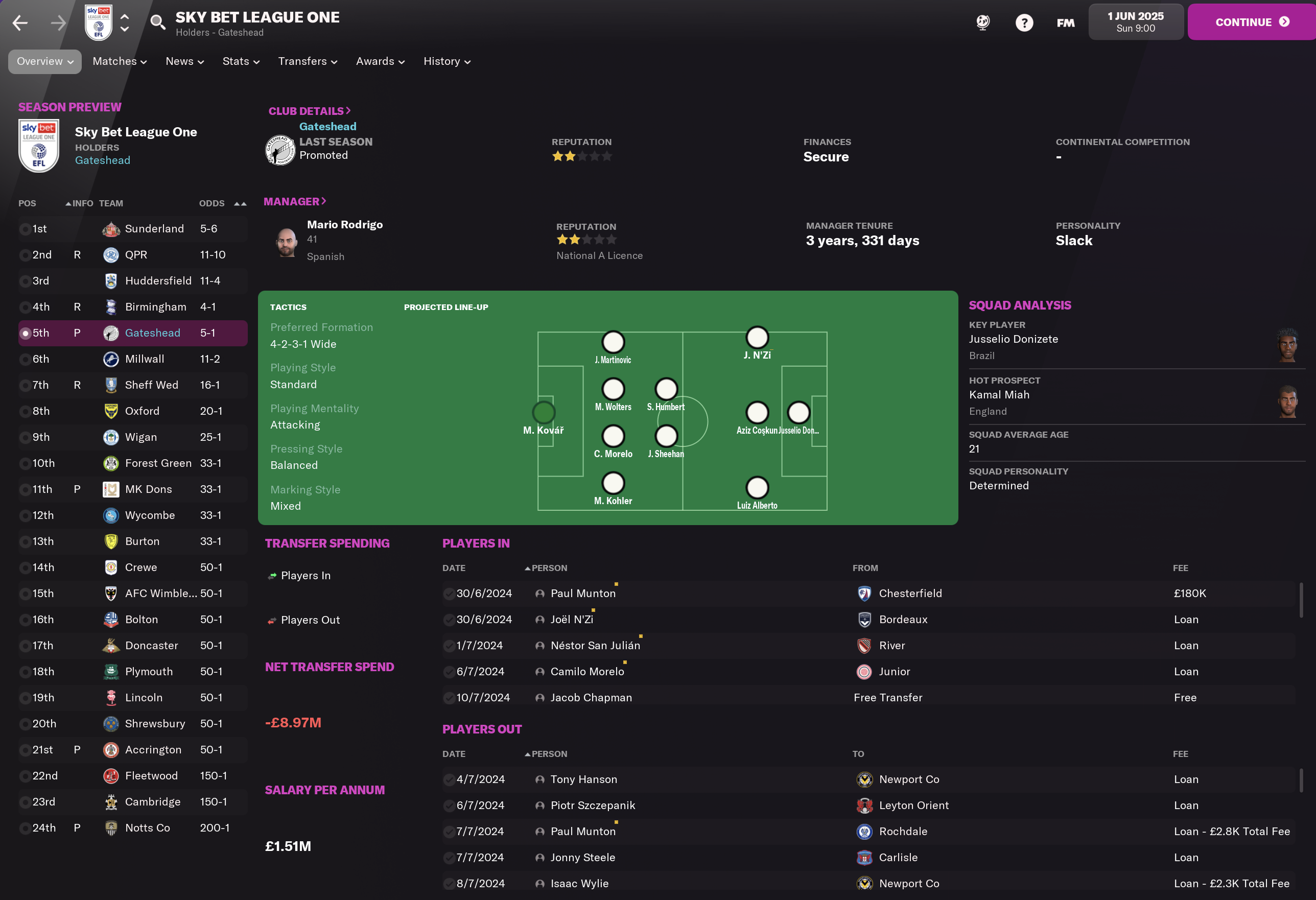 All the first team 11 players performed well beyond the 7 average rating mark.

I usually like to have a 22 players squad, with many versatile subs who can play in different positions.

Remember that only 5 players on loan can be chosen for any given match squad in League One.

Anyway, I think I will need to improve this squad a lot if I want to achieve my goal of winning the Championship League next season.

Ending the season in 5th place at the odds table, means we should be positioned last on next season in Championship odds table. 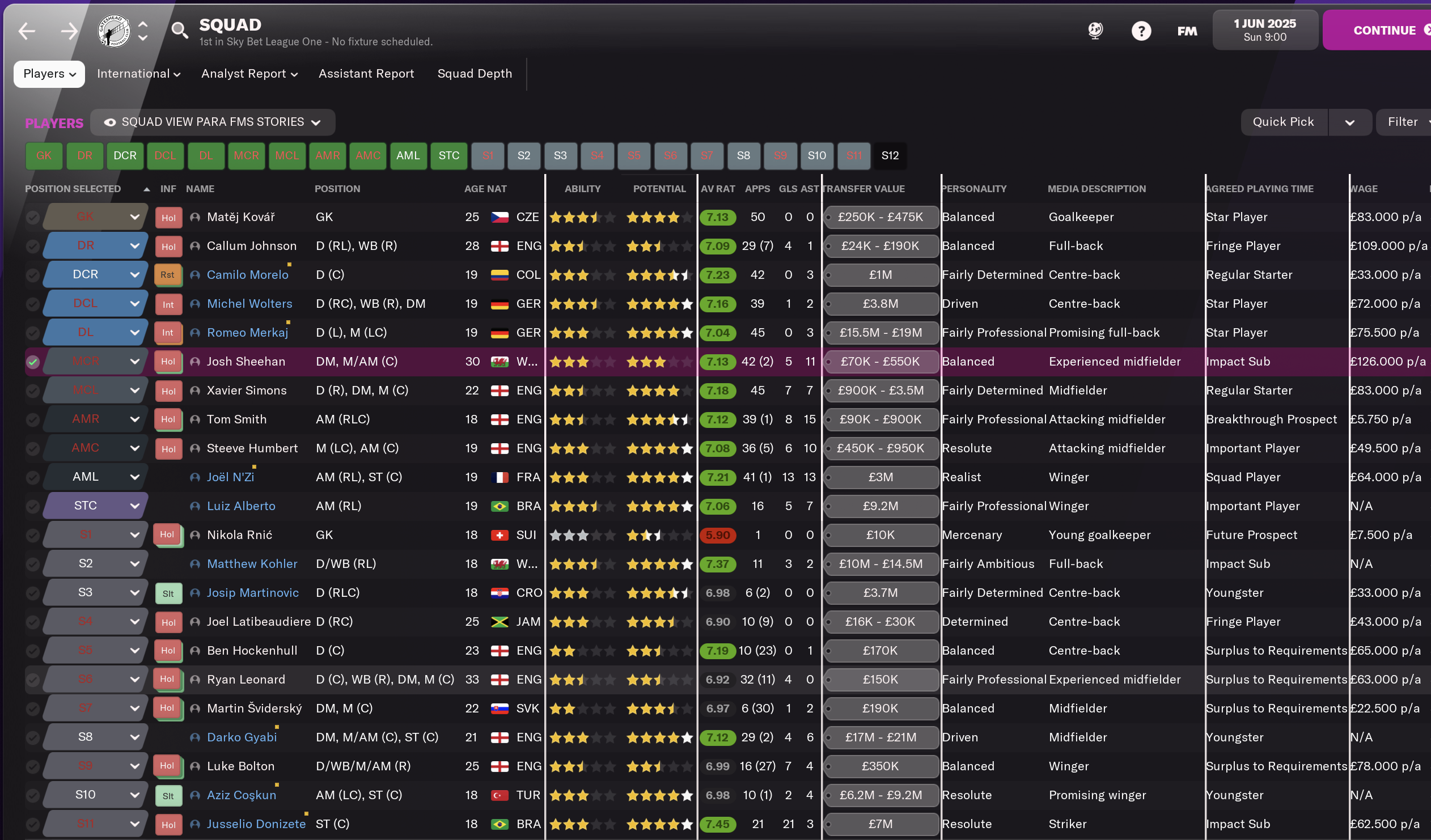 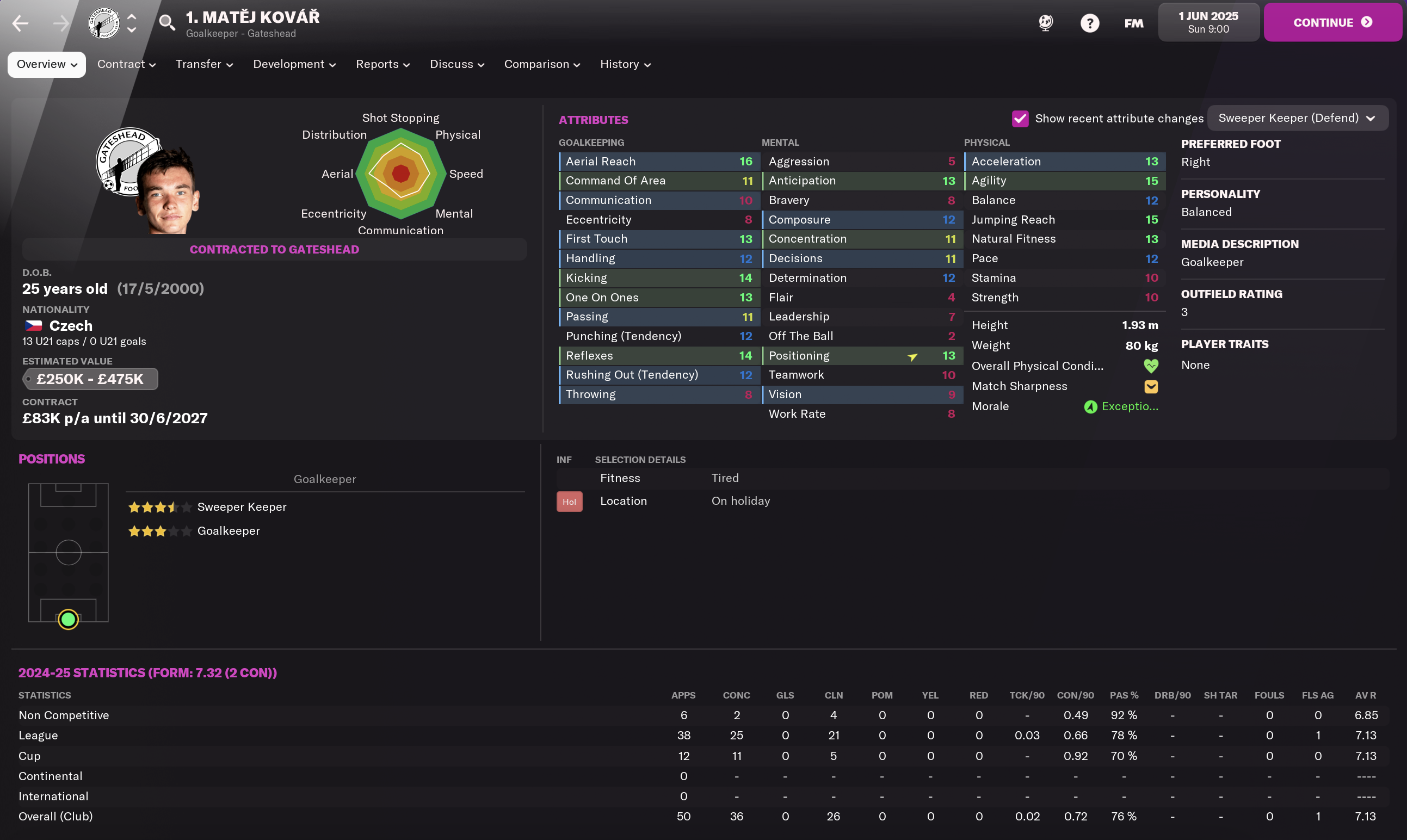 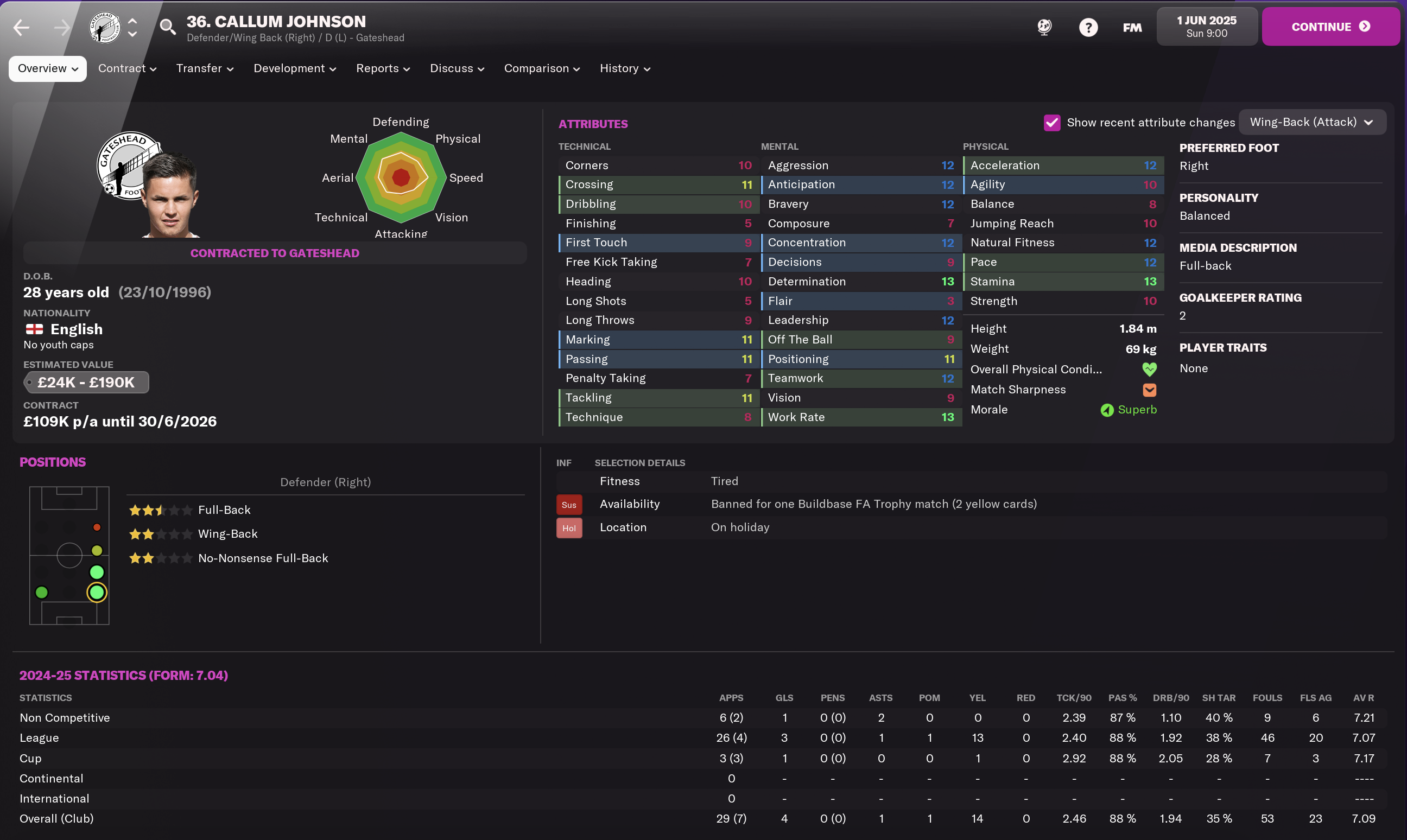 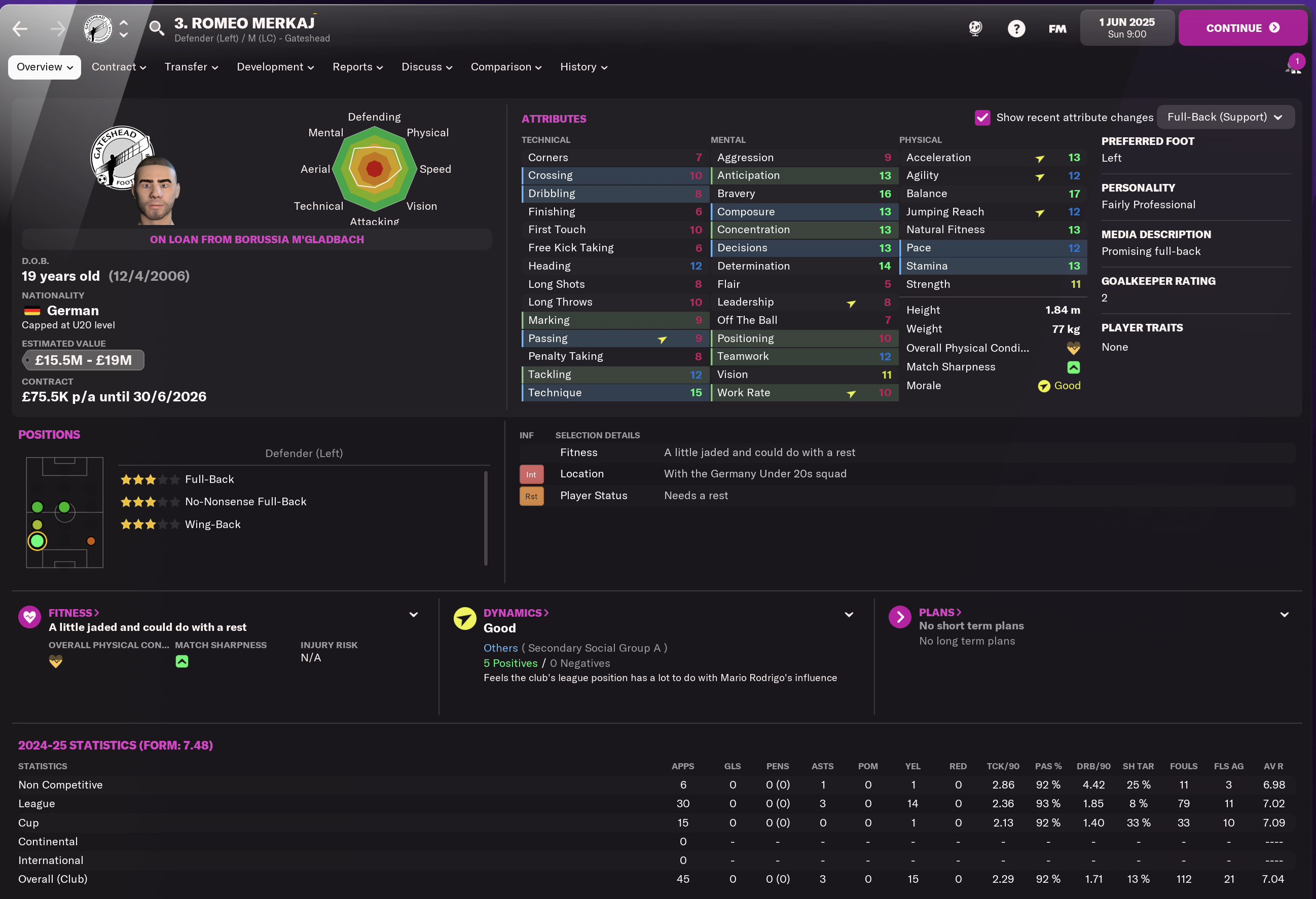 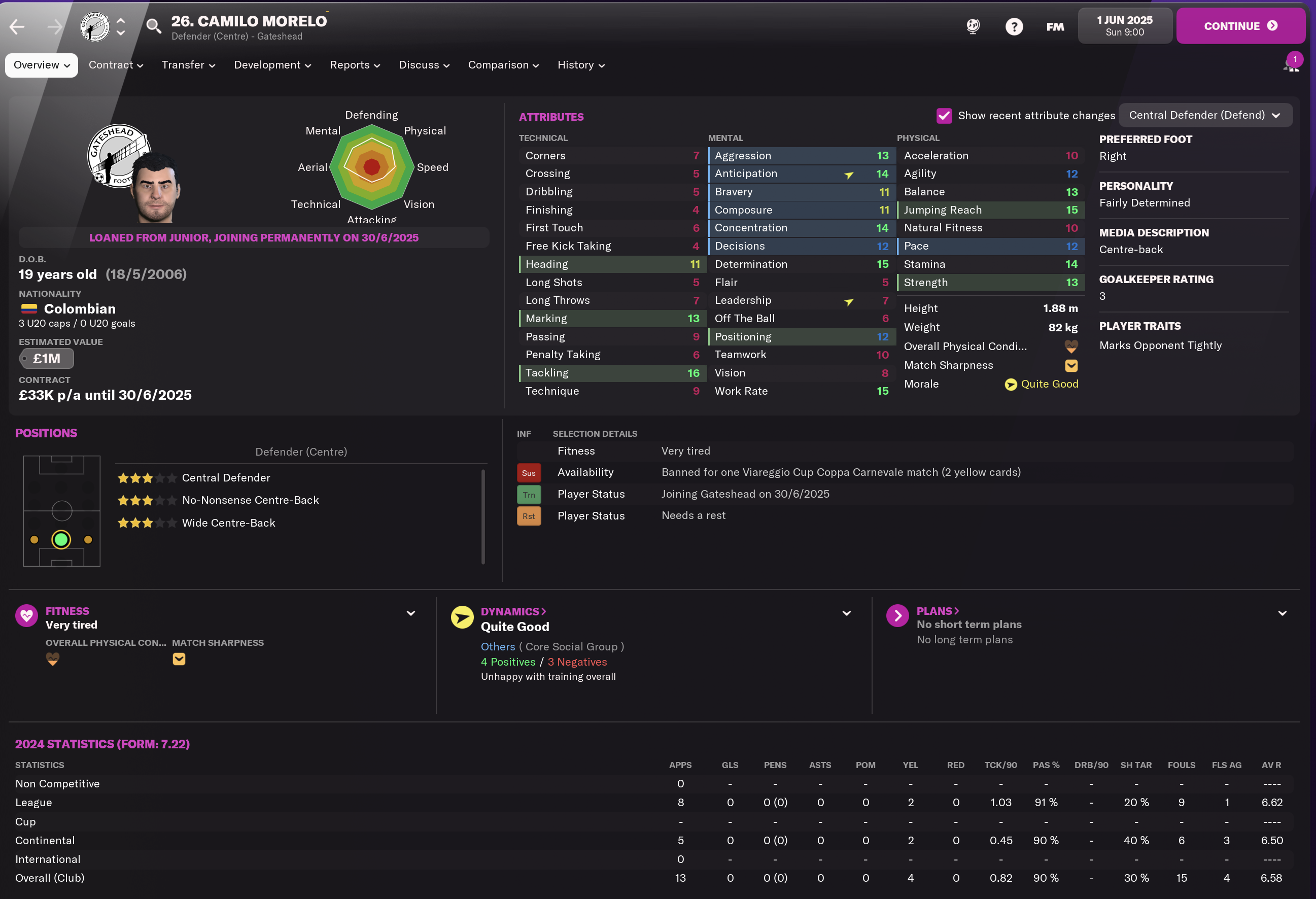 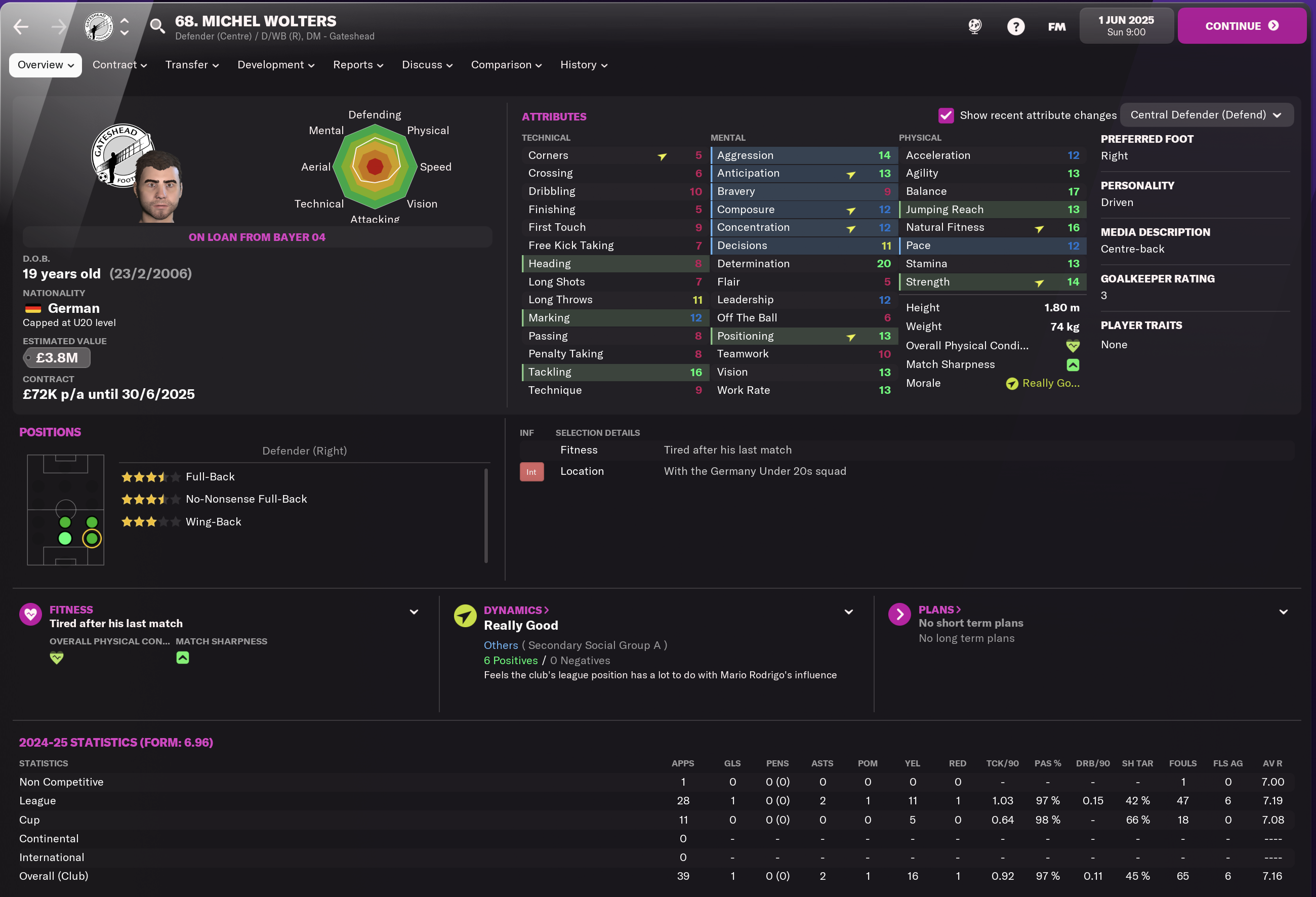 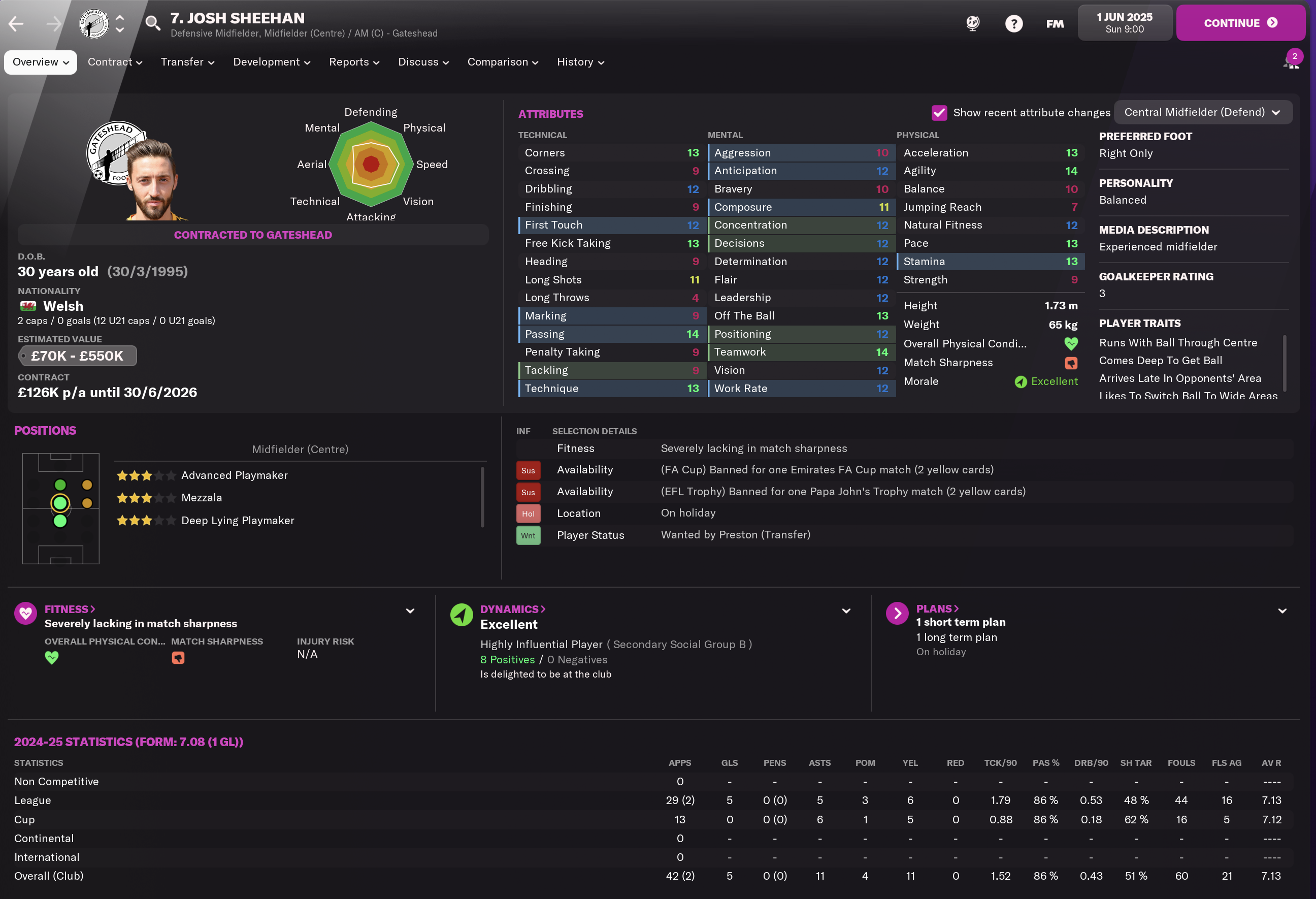 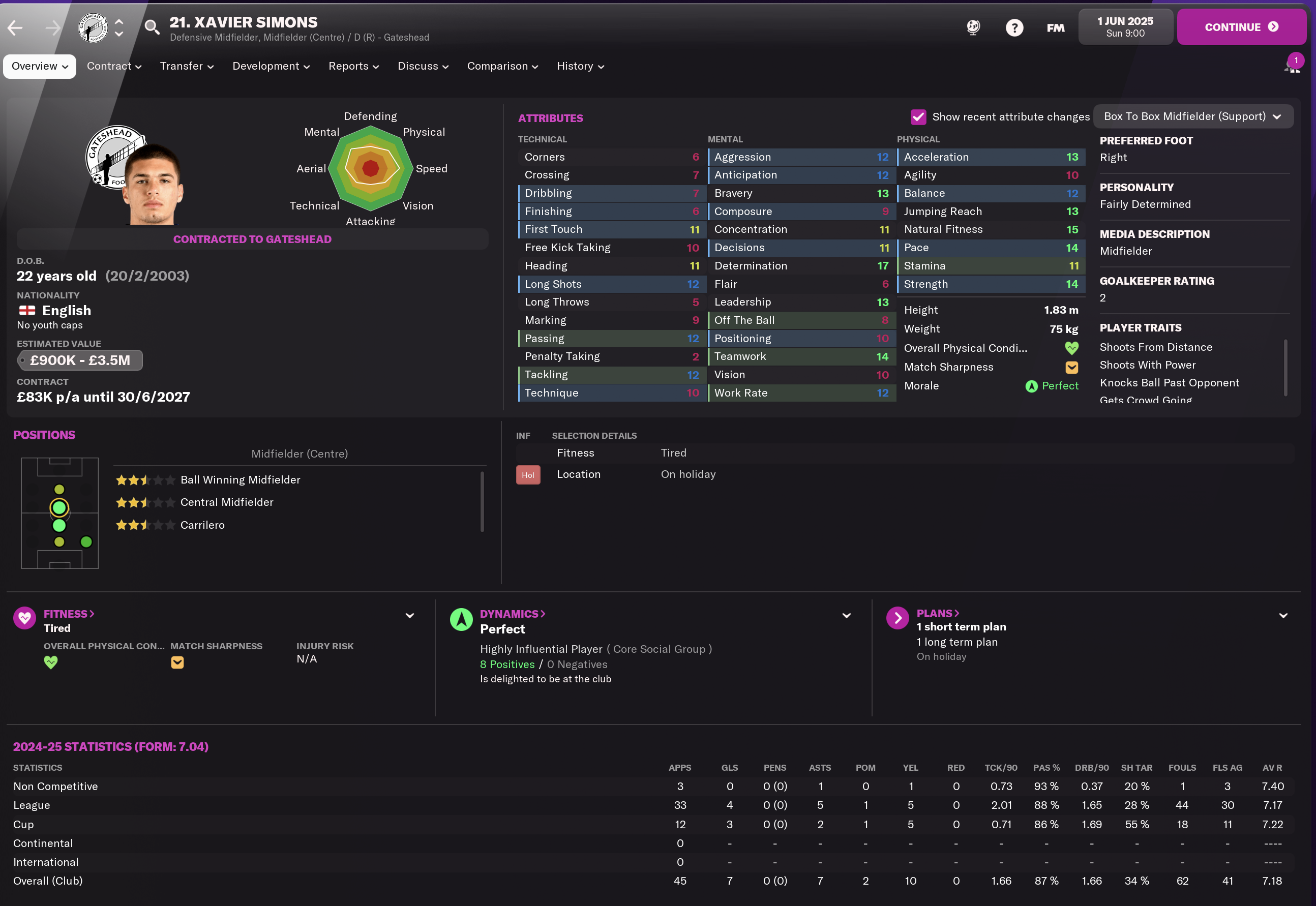 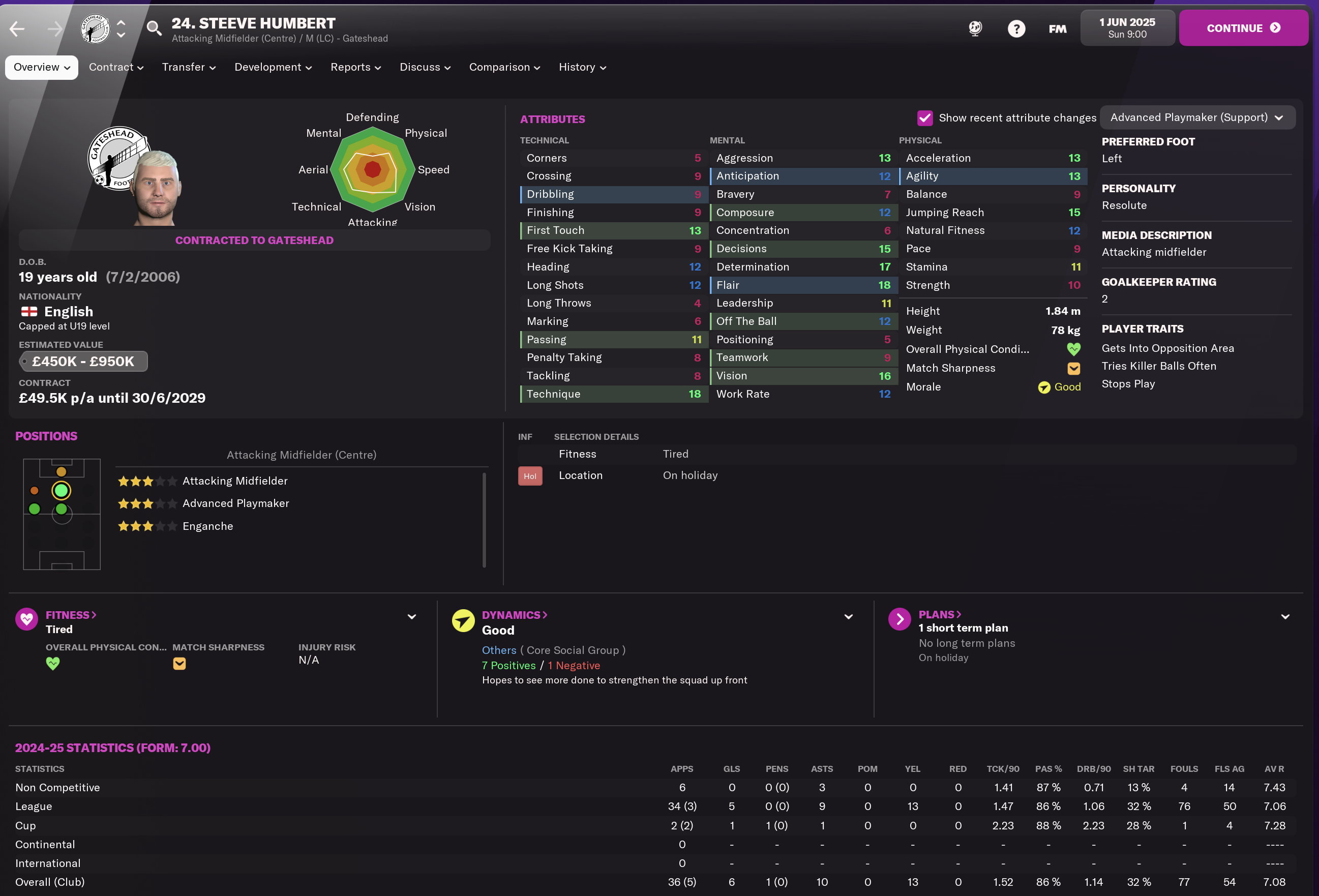 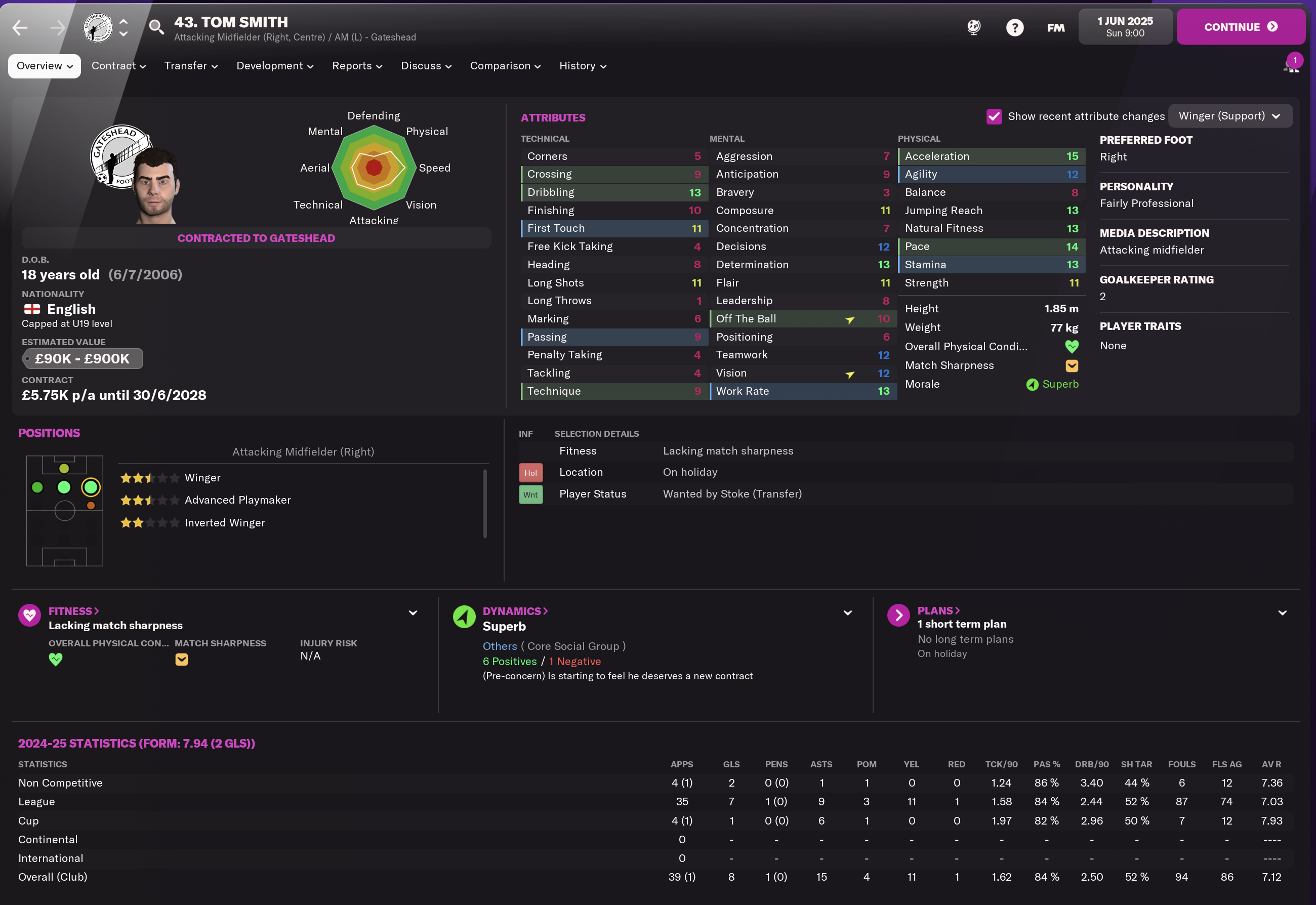 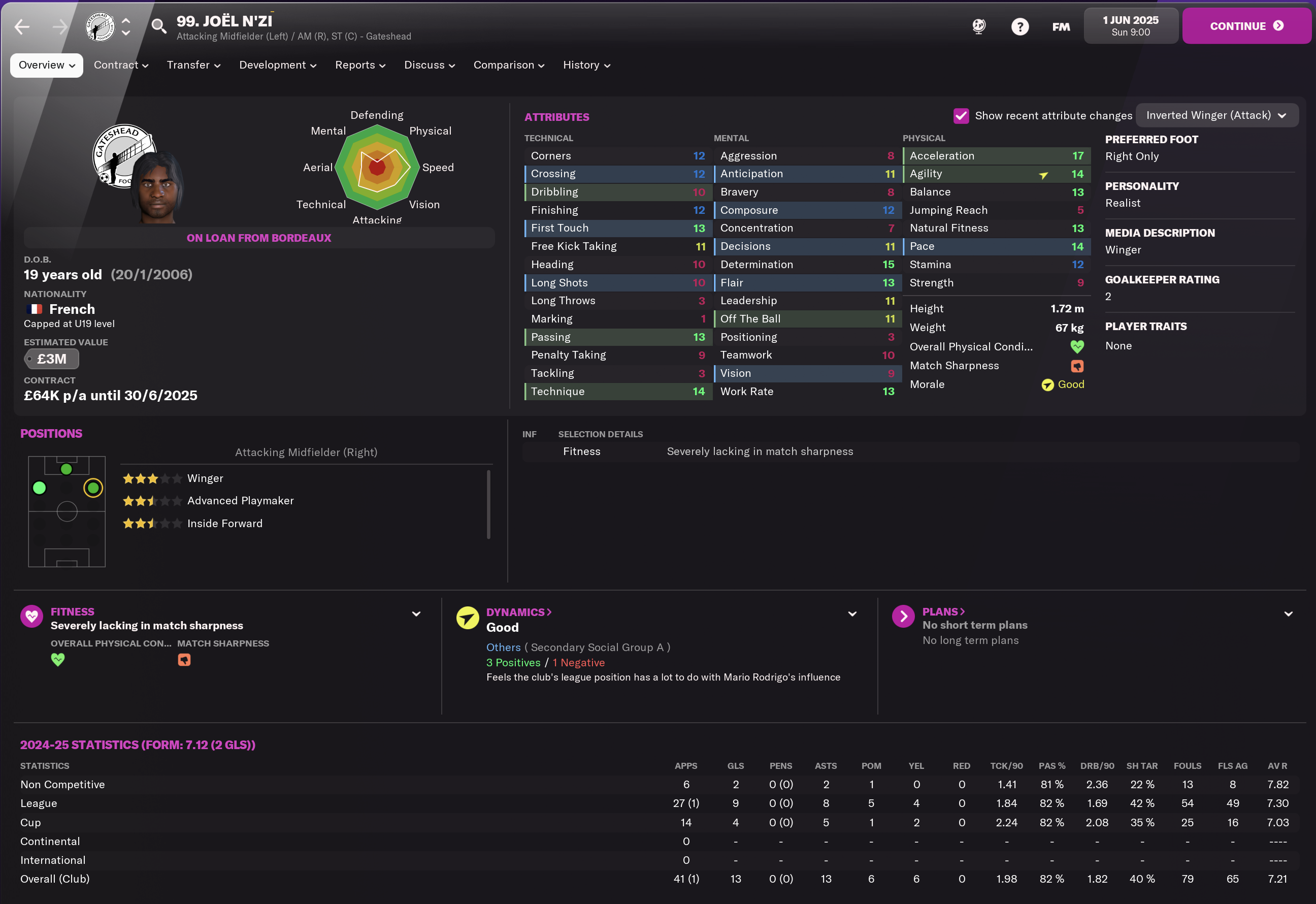 I did quite well throughout the season bringing new talents.

I also signed Colin Norman from South Shields for 28K, who I think I could make a lot of money by selling him in the future.

Along with this, to complete the squad, arrived several UK players which were released from other clubs. As I usually manage to do in all of my lower league management saves, my method to bring young players from all over the UK to sell for a huge profit is working again.

After signing Matthew Kohler for free from Welsh Barry Town one and a half years before, I managed to sell him to Southampton for £9M cash plus 50% of a future sell while loaning him for free for one more season.

Before and during this season, I managed to sell some more players for £370K and send many more on loan for them to develop. After only 4 years at the club I became a Tynesiders legend! 😀😀😀 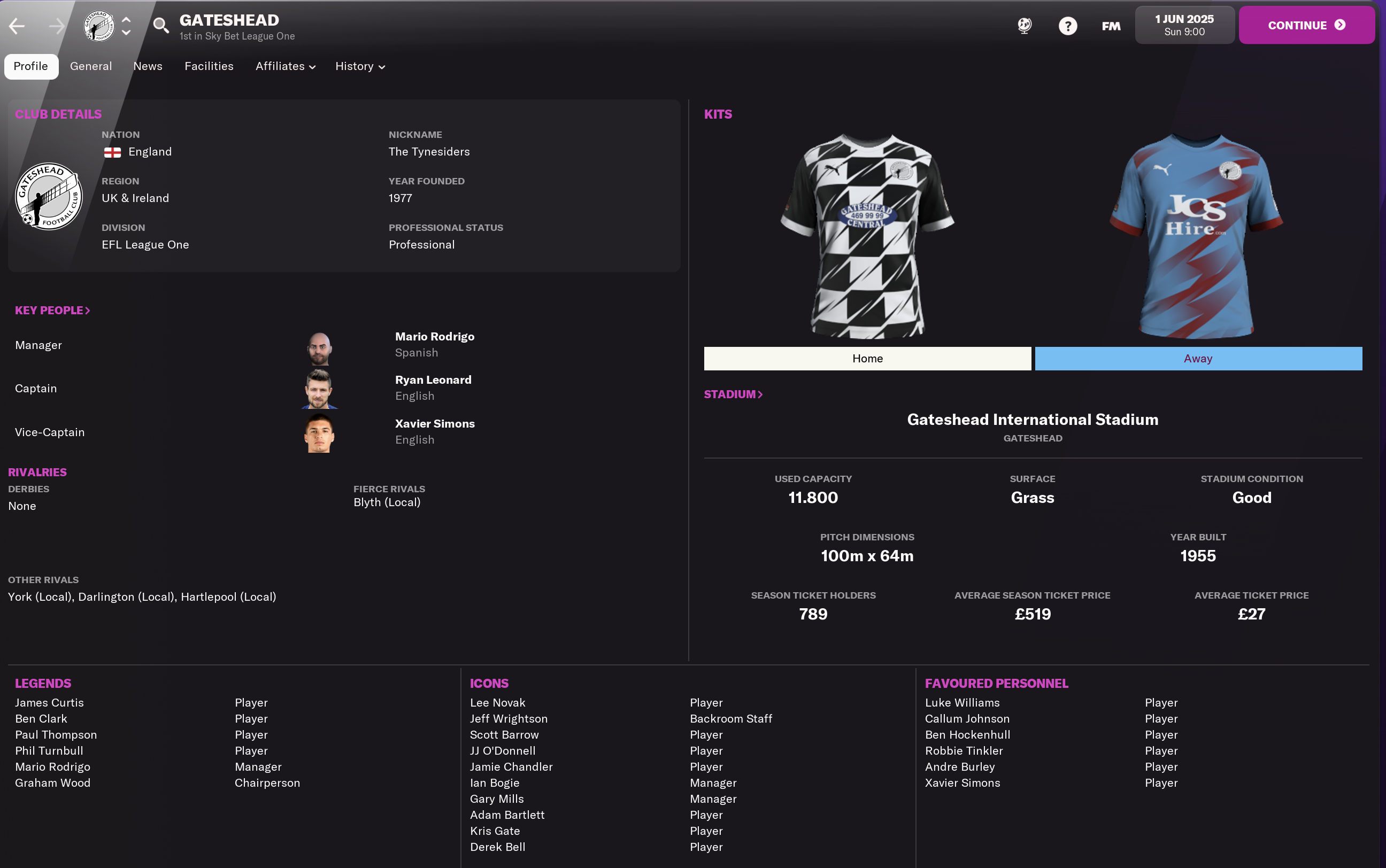 The media predicted us to finished in 19th position throughout the season….. they were wrong . 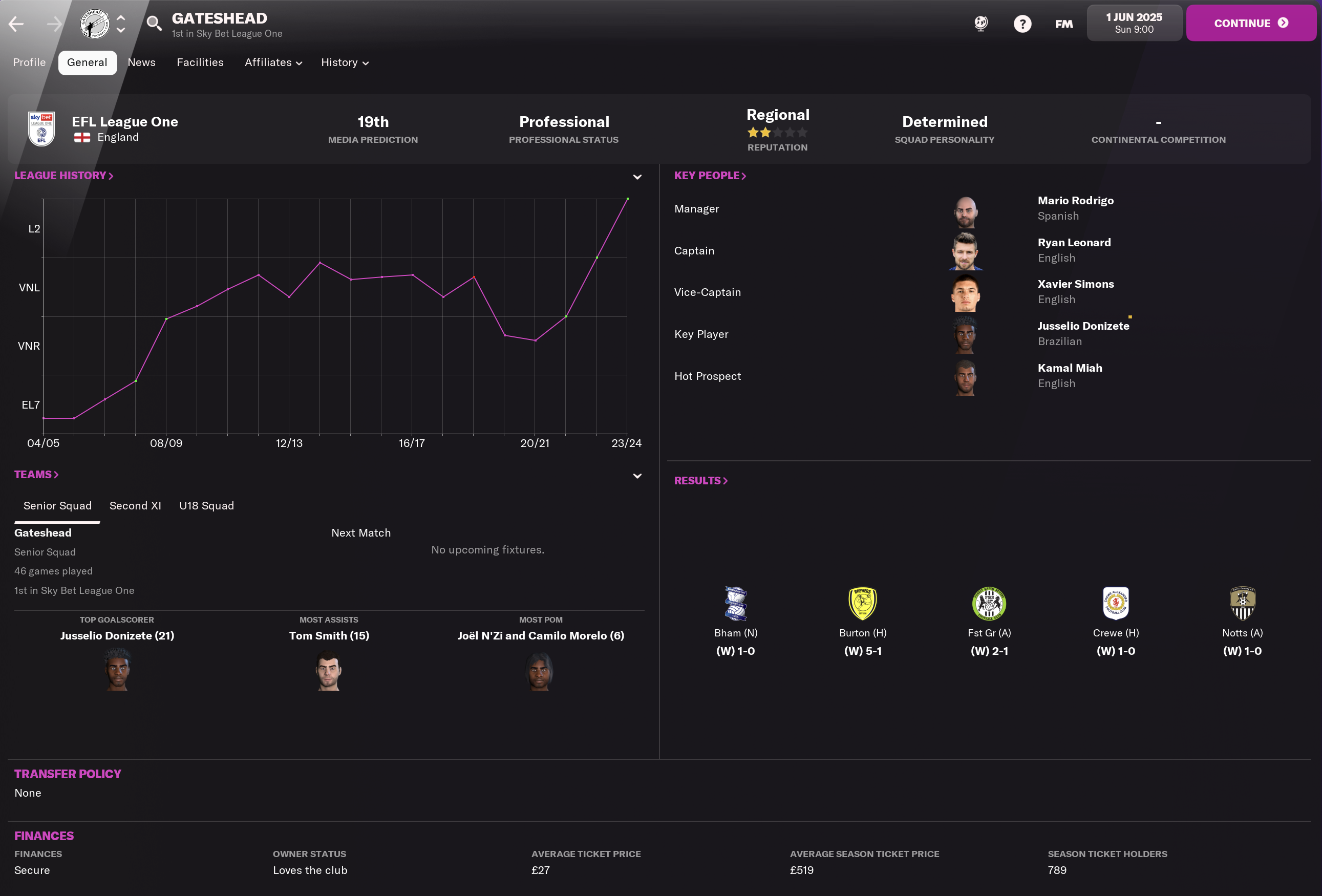 The facilities we got will be poor for Championship level. I will start improving them as soon as I get some more cash from transfers out.

So far, the owner of the club haven’t injected one penny yet. 😡😡😡

I cancelled the link with Newcastle and managed to get a better one with Man City. This is as good as it gets regarding senior affiliates.

We get to loan two players per season and the money from the gate tickets of a pre season friendly match.

After selling Matthew Kohler for 9M to Southhampton, our overall finances are superb for a League One team. The board expects us to fight bravely against relegation next season.

They started to improve the youth facilities and accepted to expand the scouting range to scout players from all over the globe. The squad dynamics look very good, though I have 5 players concerned and an unhappy one.

Anyway, most of them will be leaving soon.

Plus, none of their mates support or agree with their concerns or unhappiness. 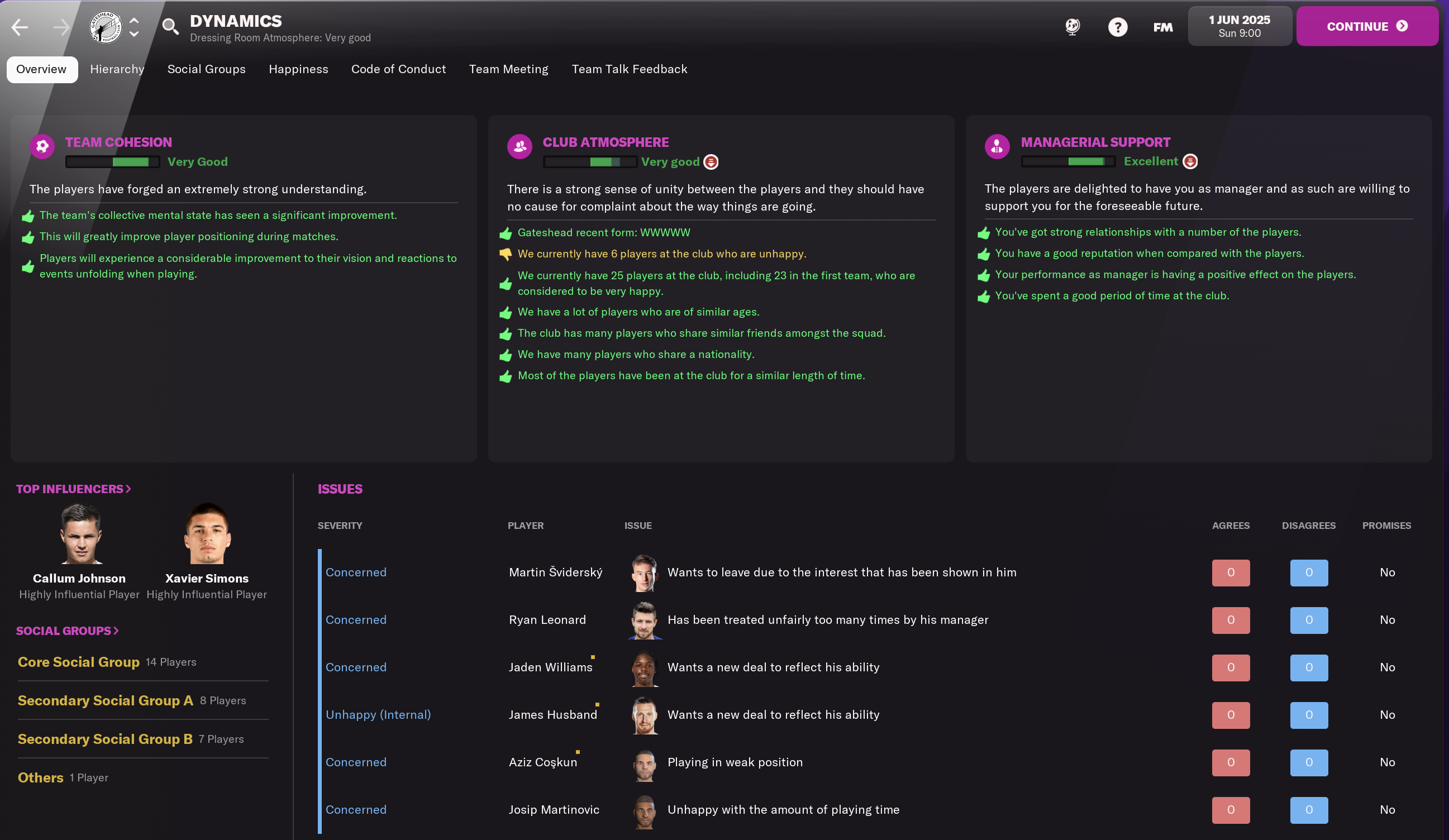 Ideally I try to have one or two core groups, having 4 is better to be avoided.

I used the same 4-2-3-1 wide tactic as the 3 previous seasons. So far it worked super good, so soon I will make a post about it. 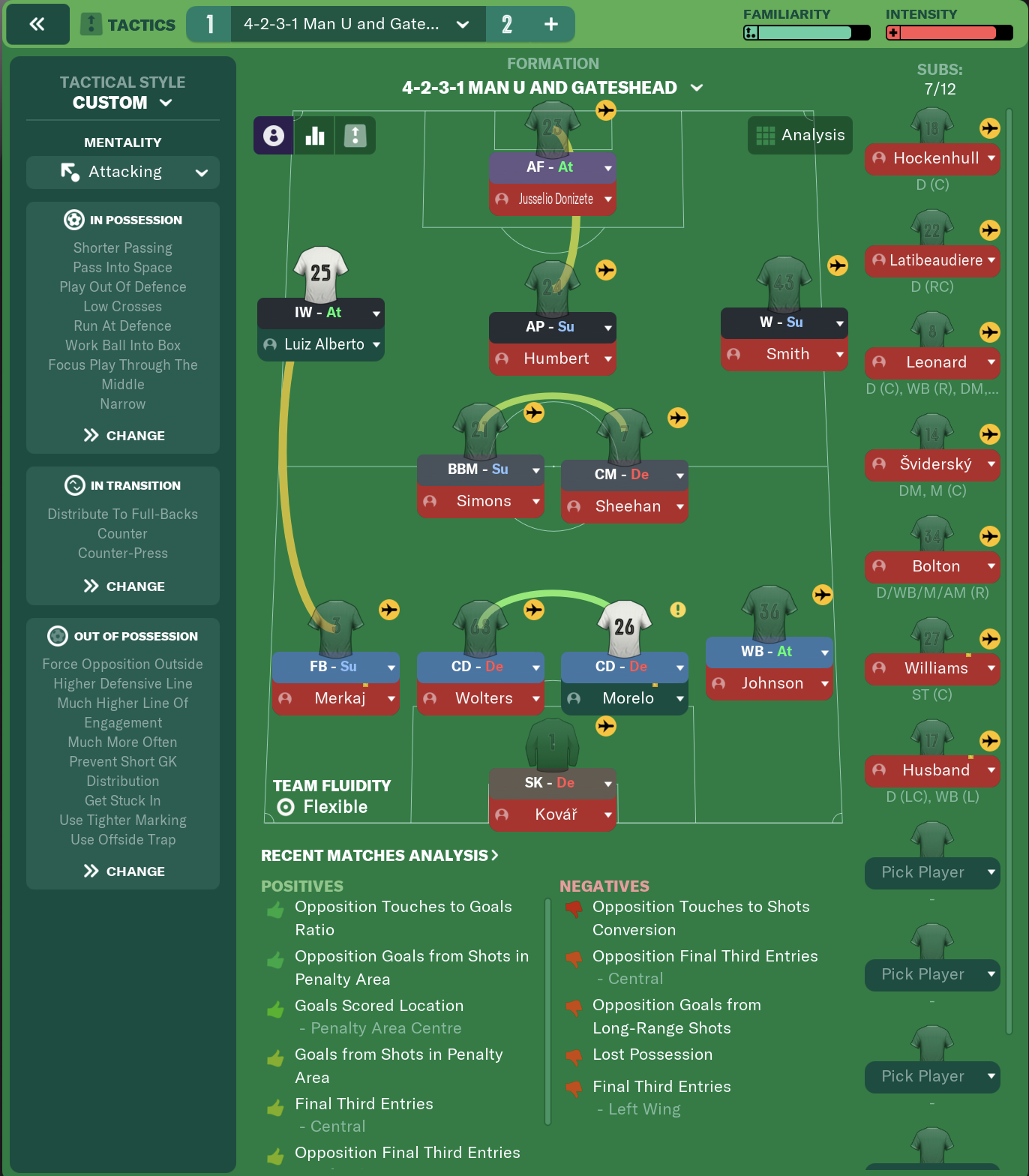 As in all previous seasons I used Andrew Gibney’s training schedule, you should check his training guide and download his set ups.

I improved the coaching staff and is looking great with 3.5 or 4 stars⭐️ in all categories. I hope you enjoyed this new episode of my Gateshead to Glory FM story. See you next season in the Sky Bet Championship league.