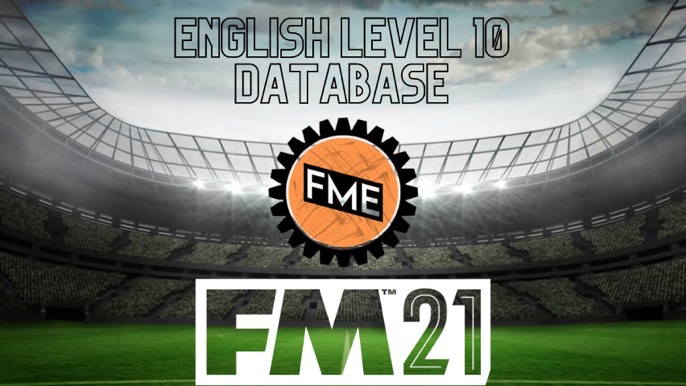 Unlock the lower leagues to level 10 with this FM 2021 English lower leagues database. Created by FMEditor for Football Manager 2021 this database includes all cups and enables you to manage any club in the Football League pyramid down to level 10.

I used a Football Manager English lower leagues database and guided Scarborough to Champions League glory in FM20, its one of the most rewarding saves.

For some the Conference North and South just aren’t enough. Imagine managing your local town, on mud soaked fields and helping them grow into a domestic or even European giant.

This England level 10 database for FM 2021 includes a real structure and full rules. You would need to win 9 promotions to reach the Premier League promised land, certainly a challenge for the long term FM21 fan. Here is the Football Pyramid used and further down the download link.

Download the FM 2021 English lower leagues database by clicking the button below then follow the installation instructions:

Note: If you find any bugs please report to TheFMEditors Team (@TheFMEditor85) / Twitter

2. For Windows put the downloaded file in this folder: Documents/Sports Interactive/Football Manager 2021/editor data. If the “editor data” folder doesn’t exist you will have to create it. Windows users skip to step 2, Mac users read below.

3. Now load the game as normal and start a new career. Look to the top right & under ‘database’ select FMEditors Database

4. We recommend disabling ‘Do Not Add Key Staff’ and enable ‘Add Player To Playable Teams’ from the advanced options.

We hope you enjoy this FM 2021 English lower leagues database. Remember if you write about Football Manager and would like to share your tips and stories, get in touch.

The link is broken, just to let you know :/

YEs sorry, they had issues with the database so had to take it down for now. But should hopefully be back up soon, maybe this weekend.

I got promoted with Billingham Town and ended up in a southern league?

You would need to ask the FM editors on Twitter as we did not make this. It could be that there were too many Northern teams potentially or even a bug.