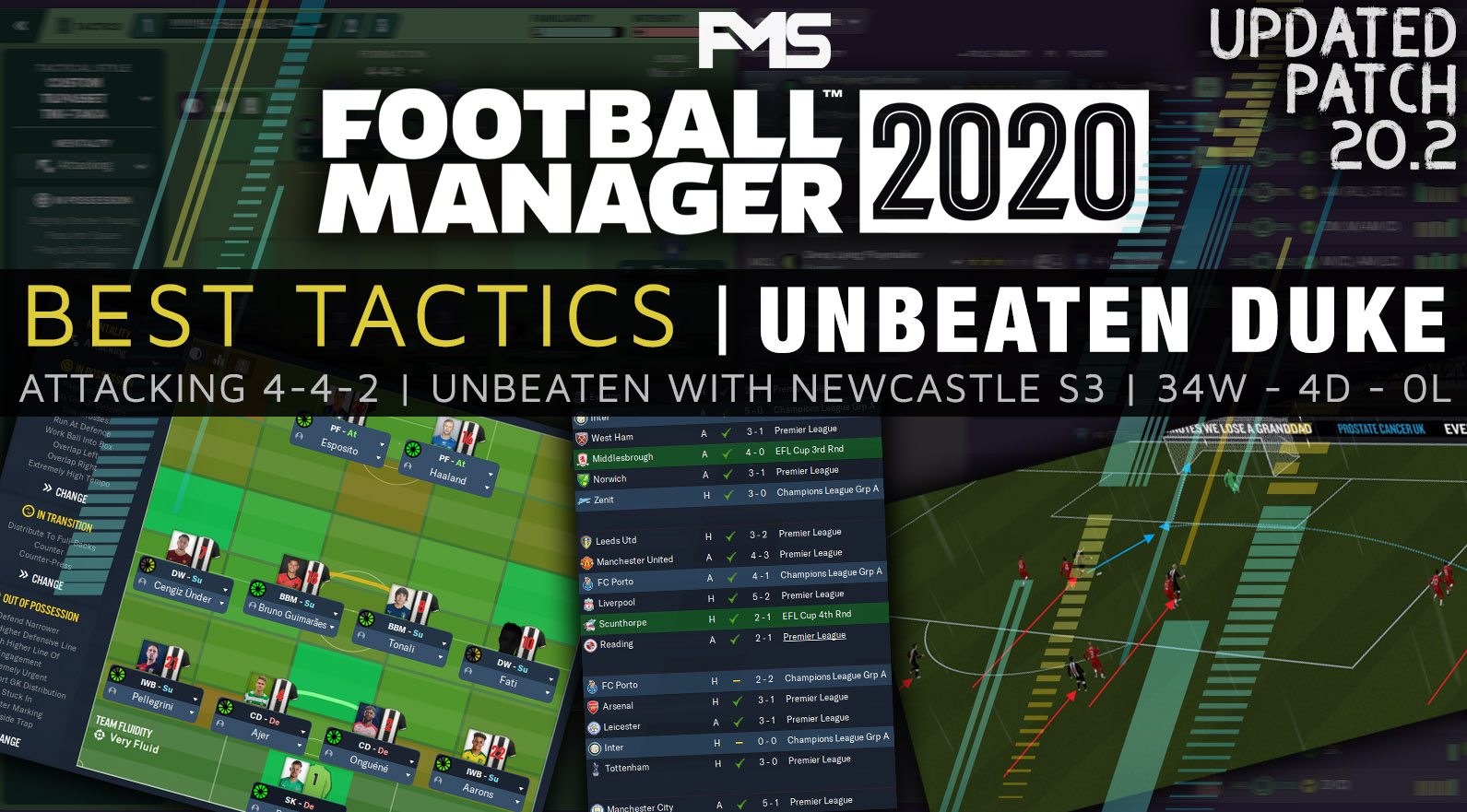 Welcome to our best Football Manager 2020 Tactic for patch 20.2 and probably the most entertaining system I have tested since BETA release. Originally posted on FM Nation, Duke Ryan is a flat 4-4-2 featuring high tempo, attacking Football. Built on a high press and high defensive line Duke creates beautiful Football and is my go to tactic at every level.

Now in season three, I am unbeaten across all competitions with Newcastle (tested over 38 games.) This includes beating Manchester United 4-3 away, Chelsea 4-1 at home, Liverpool 5-2 at home, Inter Milan 5-0 away and even Man City 5-1 at the Etihad! I would recommend this tactic for top, sub top and mid-table teams. Your players don’t have to be worldbeaters, but should suit the system (covered later under player roles.) I even found great success in the lower leagues with York City.

Duke Ryan’s 4-4-2 is the best FM 2020 tactic I have tested for one reason, consistency; Every other system has faltered after 3-4 months, Duke Ryan appears to get stronger with time.

I have tested three 4-4-2’s and Duke Ryan stands head and shoulders above the rest. Each role plays an intricate part and pieced together works beautifully. The inverted wing backs – when in possession – sit narrow and high acting as some sort of central midfielder come wide midfielder hybrid.

This allows the defensive wingers to act out of sorts with their role pushing forward and stretching the pitch both horizontally and vertically.

We will analyze this later but lets cover the basics. 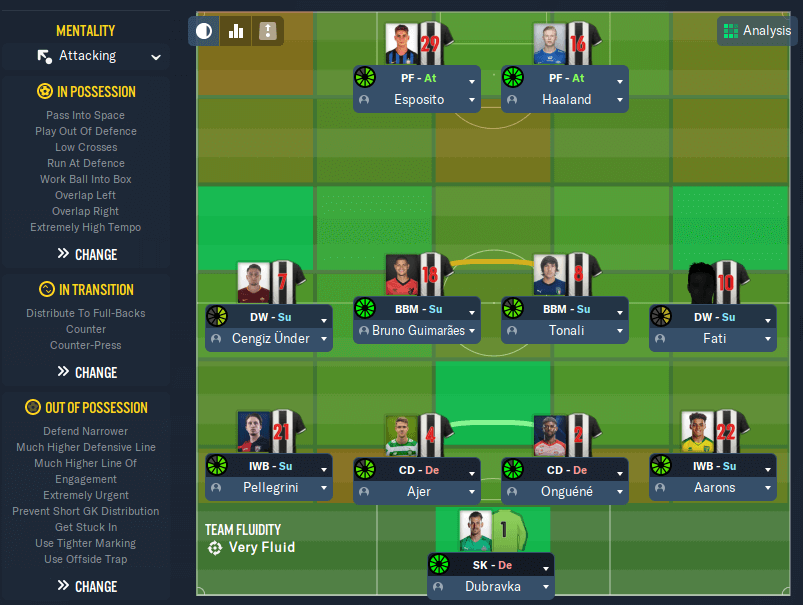 The key instructions here are ‘extremely high’ tempo and ‘run at defence’ which translate into a deadly counter. Combined with ‘play out of defence’, ‘work ball in box’ and various ‘shoot less often’ player instructions we get a perfect balance between attacking intent and ball retention. 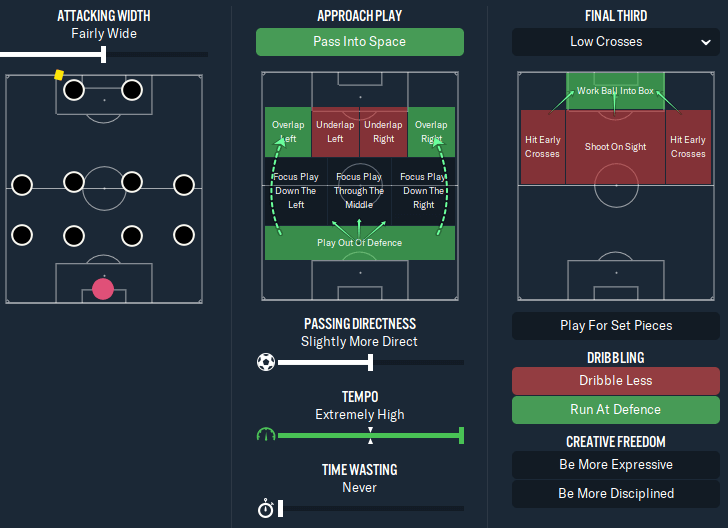 The counter and counter-press work well but nothing out of the norm here. 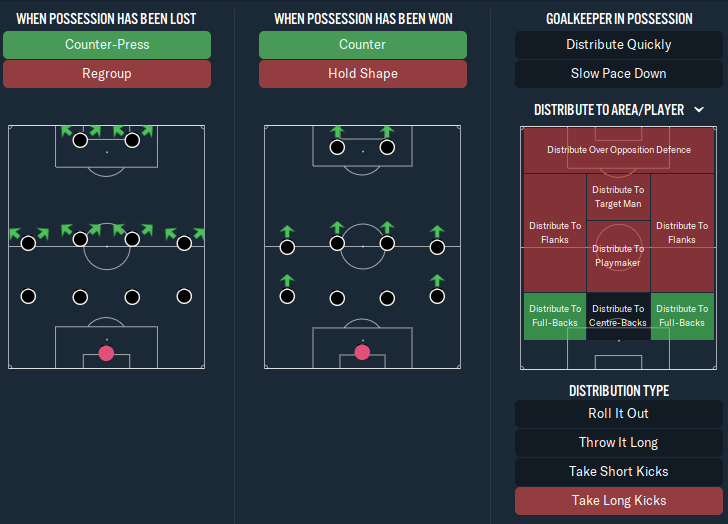 That very high line of engagement can be seen in the match engine but these instructions are standard. The player instructions and roles are where the magic happens. 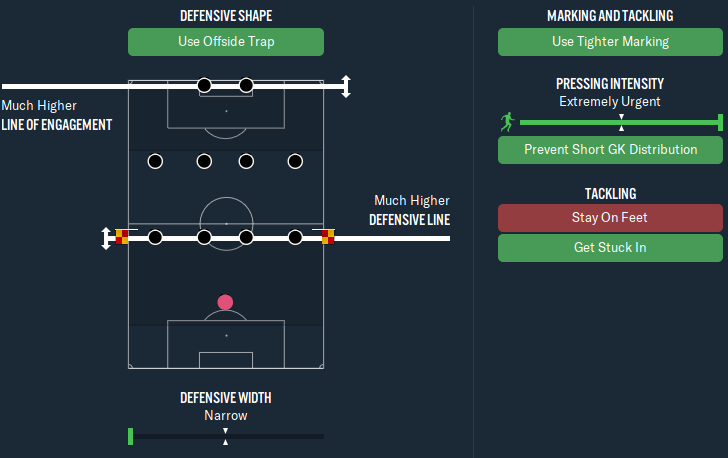 I have listed each player role below, followed by a description of the ideal player and the player instructions for those using Stadia. This tactic does use custom set pieces which I will not upload. You really do need to download this tactic for it to work to its best.

DC’s – central defender (defend) – I look for a towering presence, decent technical ability (not a must) and speed, the latter is important to counter those annoying passes in behind. Ajer and Onguene are ideal.

DR/DL – inverted wing backs (support) – Fast, forward thinking wing backs will do very well in this system. Remember DR and DL sit narrow supporting the midfield and will look for that pass in behind. Look for speed and technical ability including dribbling, crossing and passing. I found Luca Pellegrini and Zeki Celik ideal.

MCR – box to box midfielder (support) – The engine room both MC’s will trace play effecting your defence and offence. Find all rounders with good physical attributes but more technical if you can. Passing is very important and the box to box midfielder can score from range so long shots would help.

MCL – box to box midfielder (support) – Same as above, only difference comes in the instruction to stay wider, this pulls away the opposition leaving more space for your left side striker to exploit. I quite enjoyed Bruno Guimaraes and Andre Anderson.

MR/ML – defensive winger (support) – I chose to use a left footed winger from the left and right footed from the right because both players cross from the byline. These guys terrorise out wide and can cut in on occasion so finishing is helpful. Technical players with great speed will do well. I enjoyed Cengiz Under, Jarrod Bowen and Almiron looked lively.

STCR – pressing forward (attack) – The main goal threat good finishers are a must but speed is even more important. I found Esposito and Gouiri very good. Long balls can happen so aerial ability is a bonus. Hard work, aggression and general pressing attributes will boost performance as both players close down often.

STCL – pressing forward (attack) – Same as above just note this guy is the main threat, the whole system revolves around making space for your STCL. I reckon Pellegri would work very well once that pace and acceleration recieves some work.

See below; MR and ML push up creating space for both strikers while DR and DL fill the gap. When out of possession my DC’s found great support from the B2B midfielders and often knocked on aerial duels to start a counter attack. 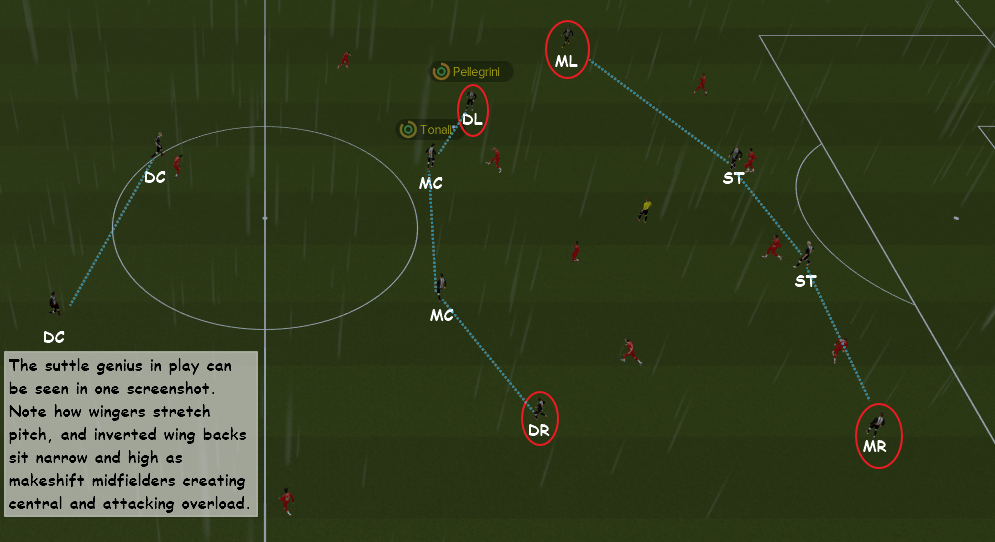 Both defensive wingers are asked to sit narrow but run with the ball often and cross from the byline. Below is a prime example as my pressing forwards are on the shoulder and box to box midfielders lurking for a rebound. This is why fast and aerially dominant strikers work well. Missing from the image is my DR (just out of shot) who can offer a cut back. 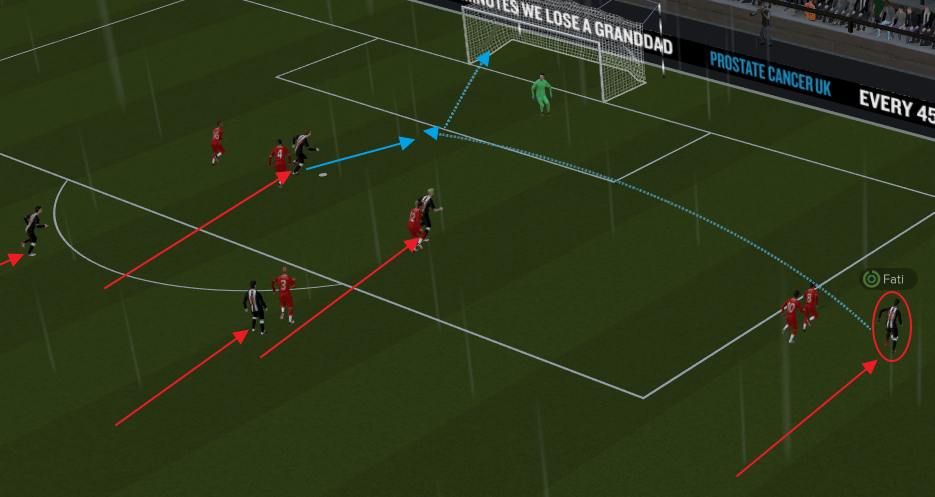 The high press is important and every effective as shown below. Man City are playing out from the back but come under pressure from my strikers and box to box midfielders. Both wingers (out of picture) cover the wide passing options. We eventually squeezed City into a mistake and scored. 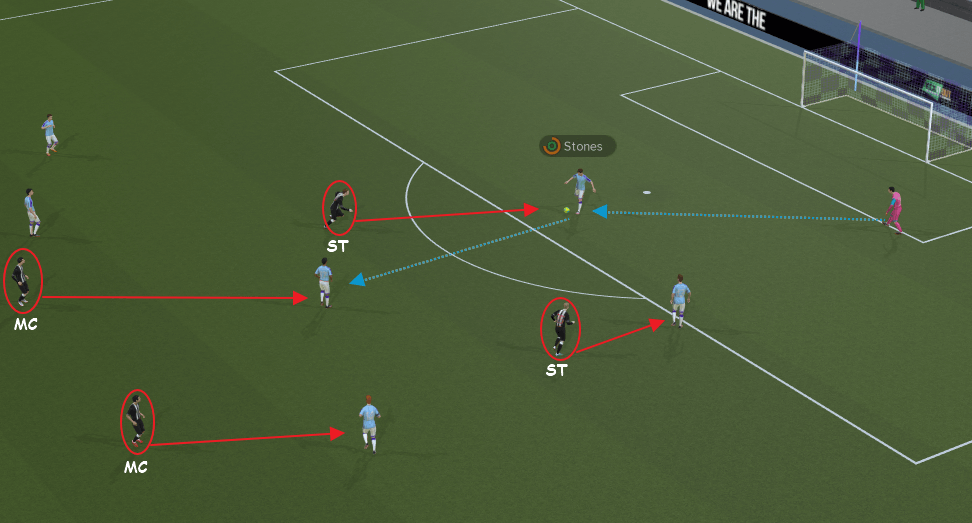 In my Football Manager Guide we discuss using two tactics in rotation. In my opinion, Duke Ryan’s 4-4-2 is the best Football Manager 2020 tactic because it can be used alone. There are however times to tweak the system listed below.

Simply amazing results, I am in season three and have a good, settled squad but not this good. Beating the likes of United, Inter, Wolves and Man City away is remarkable and the draws came with heavy rotation.

I actually managed some great results like the 3-0 thrashing of Spurs with a heavily handicapped XI. 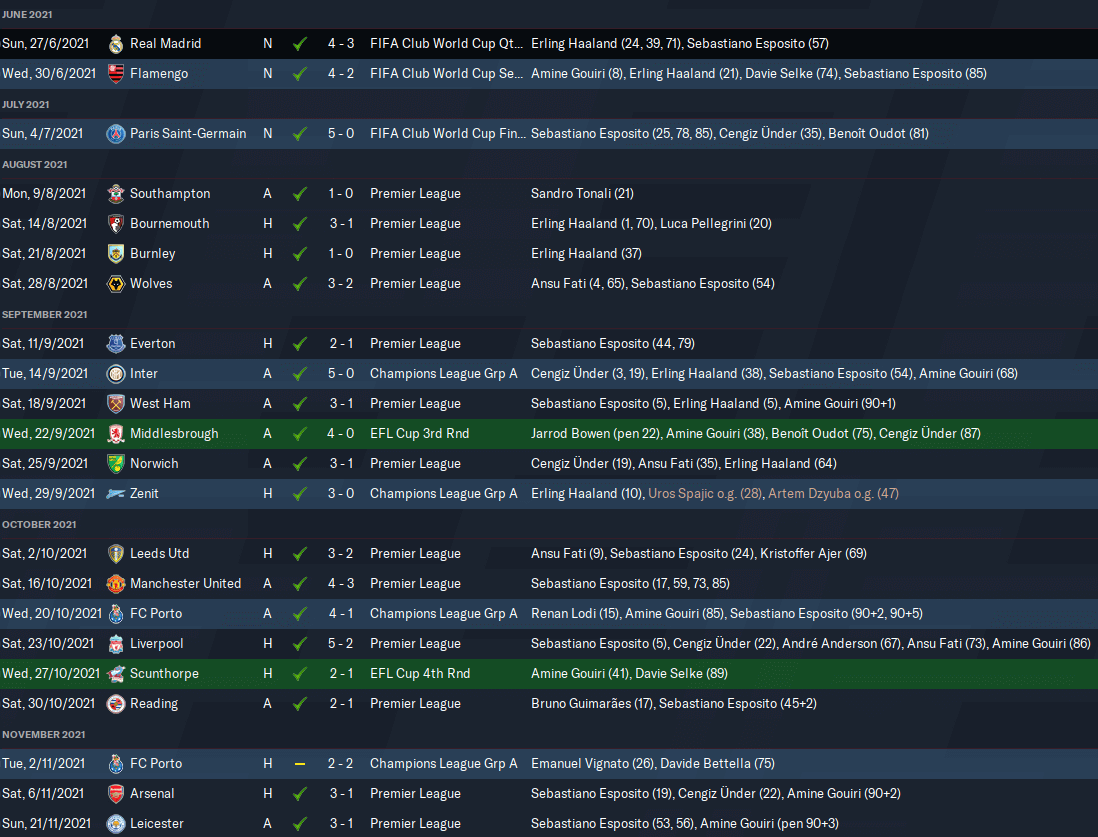 Top of the league by 16 points after 22 games having drawn twice, say no more. 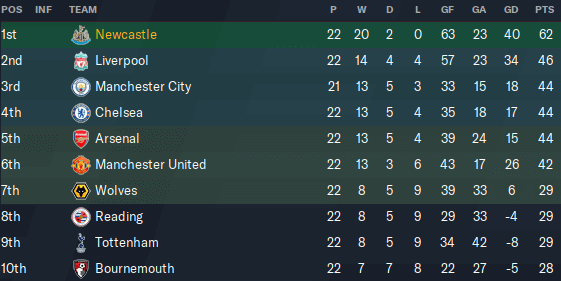 Here is my squad, note the strikers are vital but wingers could sway a tight affair. Esposito has been the standout performer by far. 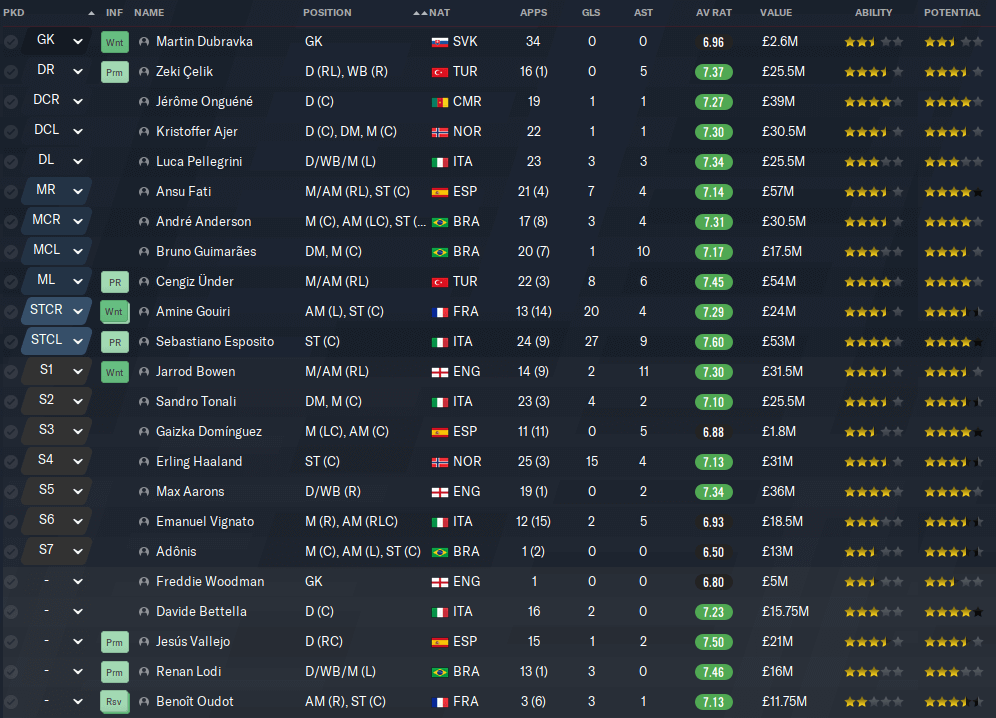 For those wondering about the lower leagues, I have gained two consecutive promotions with York City using a different tactic, then struggled in League Two. After switching to Duke Ryan’s 4-4-2  we went from four points off the pace to promoted with 8 games to go. You need clinical, fast forwards but it works a treat. 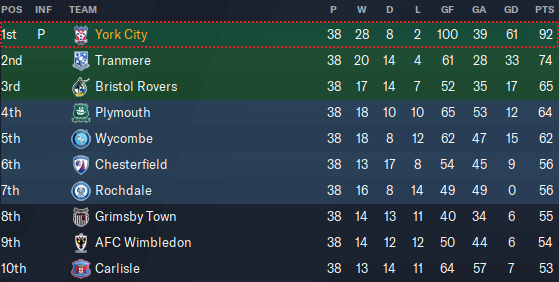 Below are the goals from York’s 4-1 thrashing of Championship side Stoke, away in the FA Cup. Note the variety and quality of goals, not bad for a League Two outfit (best watched in 1080HD.)

Thanks for reading, any social shares would be much appreciated. Follow us on social media for future posts in the series. If you would like to see this tactic live in action, we stream FM every Friday and Sunday night from 7pm, give us a follow on Twitch by clicking here.