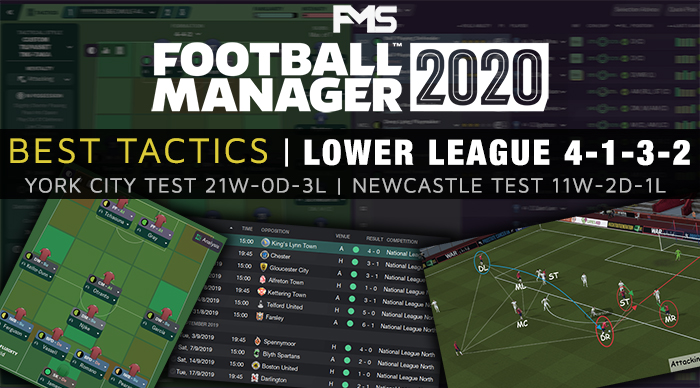 Heh guys and welcome to the second of our best FM 2020 Tactics series. Today I have a great system in the shape of 4-1-3-2, which is defensively sound and built on pressing possession play. This is the best FM 2020 lower league tactic I have tested and my go to system for York City.

Originally created for last years game by Knap (from the SIGames forum) I have tested in FM20 with both York City and Newcastle. A few minor tweaks brought this Football Manager 2020 lower league tactic up-to-date with patch 20.1.

However, all credit goes to Knap, the detail and work he puts into these systems is truly something else!

Using an adaptation of the classic 4-4-2, one central midfielder drops to DMC offering defensive security while still supporting the attack. The wide men work in tandem, inverted wing backs overlap and sometimes underlap the defensive wingers who offer cover out of possession.

The central midfielder is very important, he will dribble, link up play and arrive late in the box. Both strikers sit on the defensive shoulder and haras the opposition out of possession. 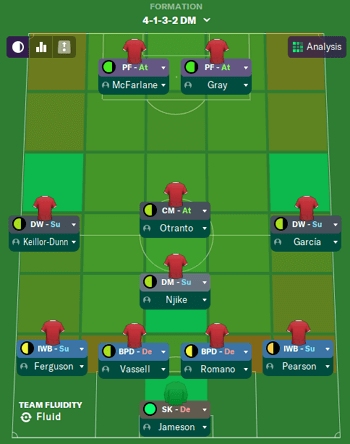 With a focus on wing play we overlap, sit wide and run at the defence. Unlike most systems a standard tempo with work ball into box is in use. This helps retain possession and attack with purpose without dilly dallying around. 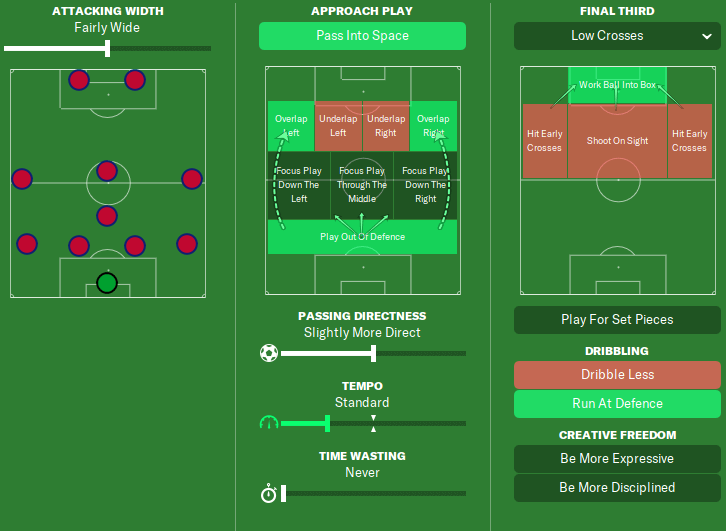 Counter and counter-press are activated, while the sweeper keeper is asked to throw out to our wing backs. 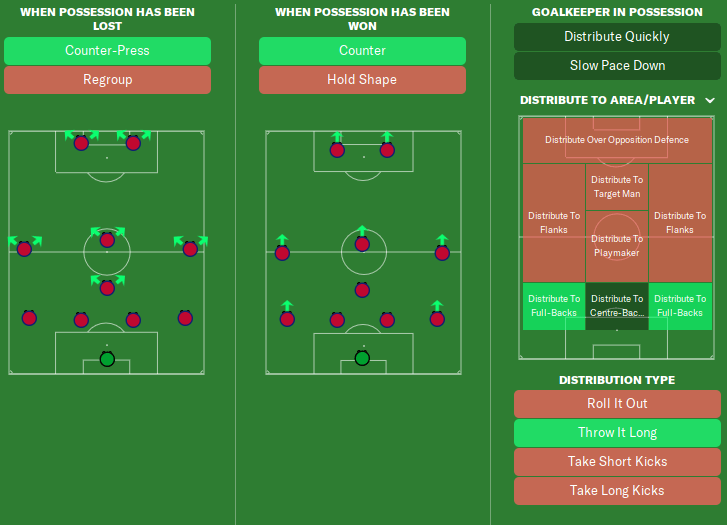 You may assume the best FM 2020 lower league tactics utilise a low line and reserved approach, not the case with this 4-1-3-2. Your defence will push up to the half way line applying an offside trap. If possession is lost, you will engage the opposition with an aggressive press.

Note: Do not try and copy this tactic, there are many specific player instructions and important custom set pieces. If you do not download this best FM 2020 tactic, it will not work. 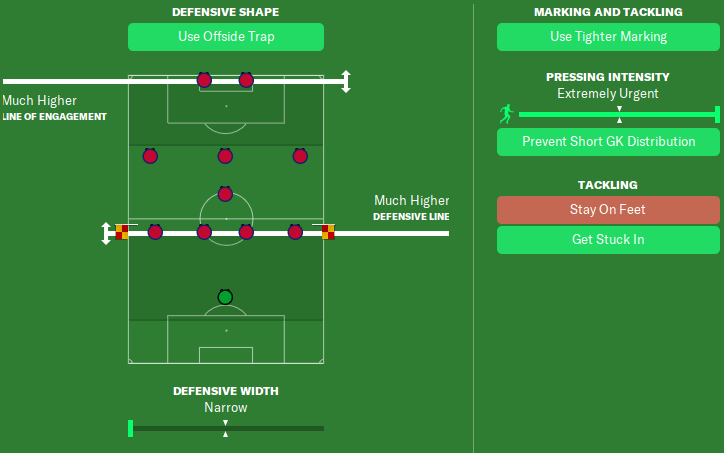 DR/DL – inverted wing backs (support) – Wing backs overlap the wingers playing a major role. Fast, forward thinking defenders will do very well in this system. My wing backs were subpar and it showed in their average ratings.

DMC – Defensive Midfielder (support) – Your DMC has two roles; support the defence and support the attack. He shuttles between both and should be well rounded with good passing ability. I like physical, hard working DMC’s personally.

MC – Central midfielder (attack) – The main man in this FM20 lower league tactic. Your MC will dribble, link up play, find the killer pass and shoot from range. An all rounder is best but I like technical players in this role.

MR/ML – defensive winger (support) – Fast and skillful wingers with great technical ability are required. MR and ML will instigate most attacks, often found in the box good finishers will do well.

ST’s – pressing forward (attack) – The main goal threat, fast forwards with great finishing are needed. Hard workers will do well and players capable of beating their man are a bonus.

Its important to understand how a tactic works before clicking download. Learning its strengths and weakness’ will help you in the transfer market and on match day, so here is a little analysis.

Defensive shape and cover out wide

The best FM 2020 lower league tactics hold a great defensive shape when out of possession. This pressing system does just that while pressing high. The DMC makes a difference here, offering security as seen below.

The wing backs and wingers work in tandem to defend. The scene below shows our DR tracking back while MR sprints inside to cover the space. Using defensive wingers works well, making an attacking system secure. 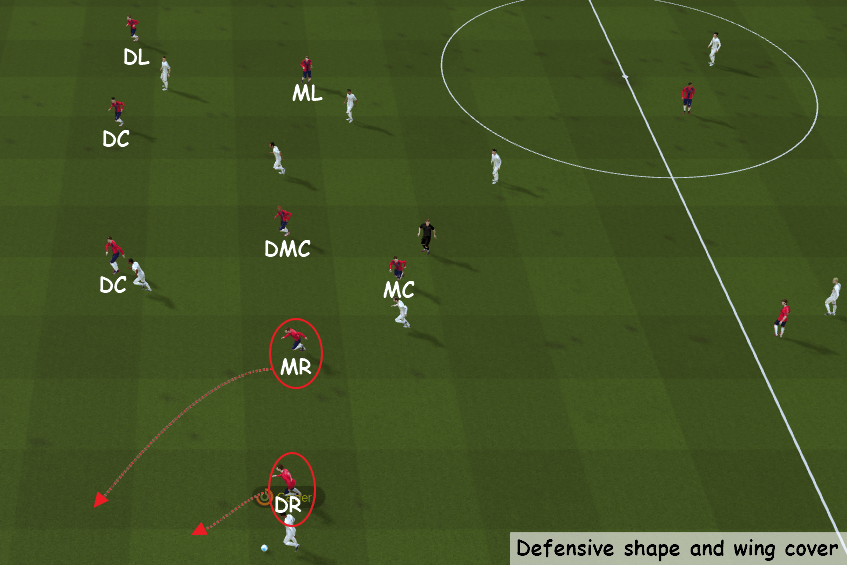 I found transitional play very effective, the scene below shows our intent after winning back possession. My striker lays a ball wide, both DR and MR sprint into space putting the oppostition in trouble. Notice my DL, MC and even DMC are moving forward. This owes to their support duty which seems to work both during the defensive and attacking phase of play.

An example of the attacking overload, we have 7 players in or around the box. The white dotted lines show how well we work the space and link up play. There always seems to be a passing option which leads to great possession stats.

The DR in possession ran through on goal to score, thanks to my ST and MR opening up the space. 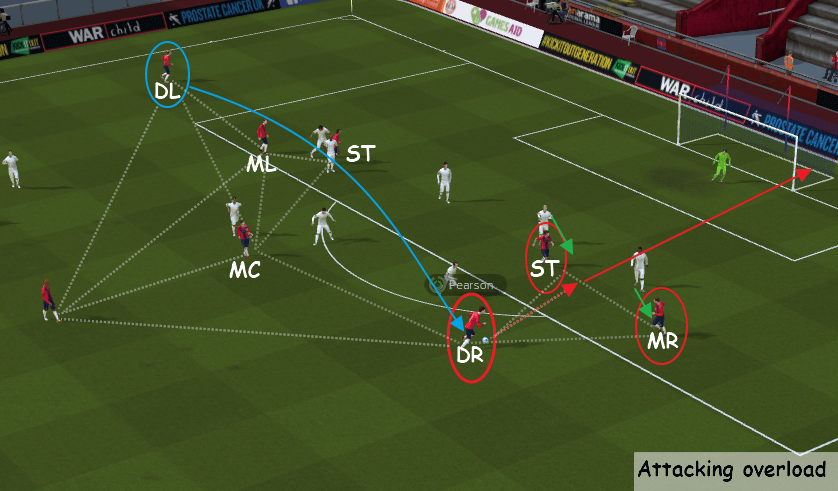 The heat map below shows how dominant the tactic can be going forward. Lots of time spent in the oppositon third with varied play. 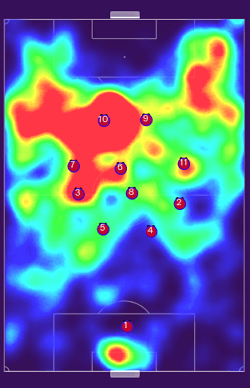 I used attacking mentality with York. The only time I changed was to cautious against higher level opposition or to defend a lead, but this is a judgement call. I don’t believe in a one size fits all approach and you may need to use cautious when managing lesser teams.

View mentality as a risk and reward formula. The more attacking you’re, the more open you will be defensively. If you are a weaker side and losing possession more often consider a more conservative mentality.

** If you are in front and want to kill the game off, use TFF’s time wasting tactic, it can be downloaded here. **

Results speak for themselves, pretty emphatic and generally when we lost it was down to squad fitness issues or red cards. Interestingly no draw.

We will walk to the title and bossed the league in terms of goals scored and conceded. 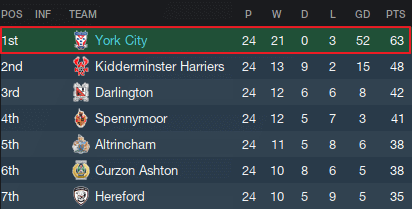 Since first writing I have continued using Knap’s 4-1-3-2, below is out unbeaten season in the National League during season two.

And during the same season we enjoyed a fantastic FA Cup run, all using this system.

A great mix of goalscoring the screenshot below is from season one, everybody got involved with every phase of play. Notice how many the midfield chip in with and this is without a set piece specialist. 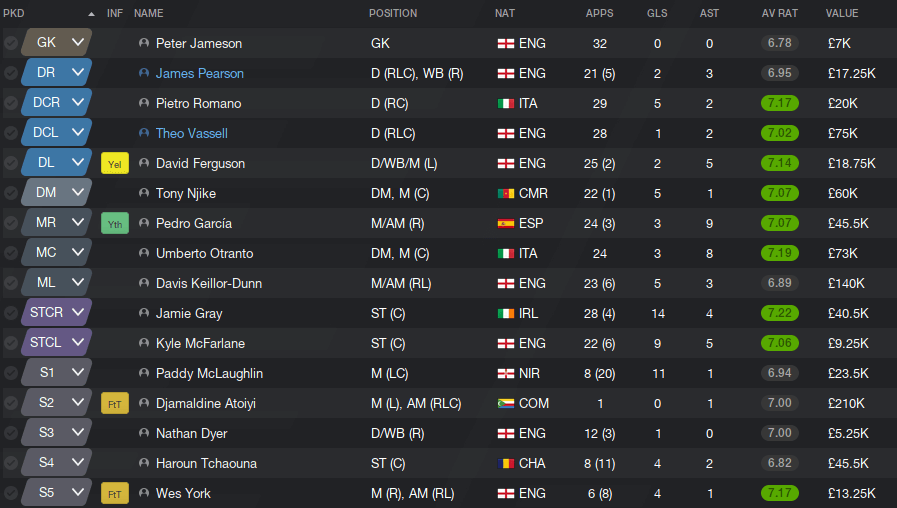 I also did a short save with Newcastle as I am wary York are a dominant side in the Conference North. The Toon Army results only backed up my research, further proving how solid this system is when used well. 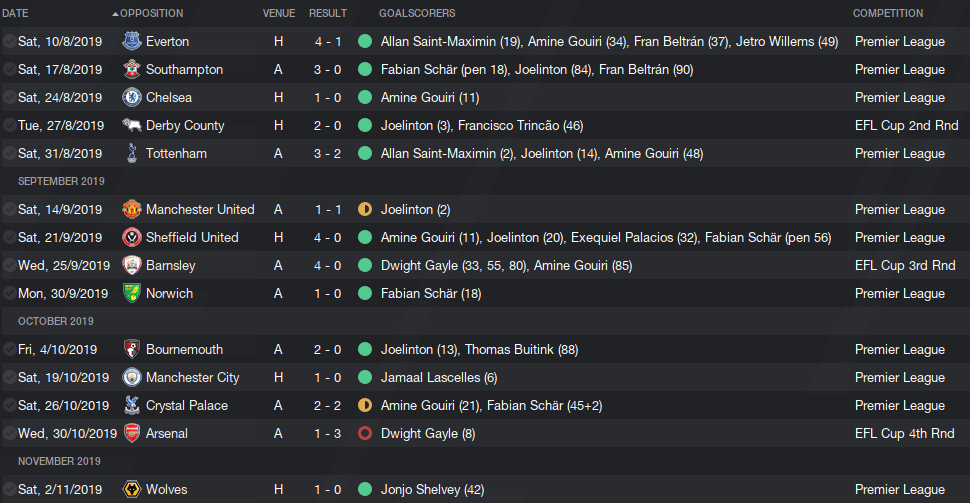 Now you have the tactic, find the best FM 2020 players:

We created the Youtube video below to help you better understand how this system works and how to use it.

2. For Windows put the downloaded file in this folder: Documents/Sports Interactive/Football Manager 2020/tactics. If the “shortlists” folder doesn’t exist you will have to create it. Windows users skip to step 2, Mac users read below.

Thanks for reading, any social shares would be much appreciated and please follow us on social media for future posts in the series. Please feel free to leave a comment I’d love to hear how you get on. Likewise any questions.

How have found this tactic to be since recent updates? I’m getting ready to begin my journeyman save, starting in the Vanarama North or South.

Not as consistent however I can’t say if its the updates or the fact I have gone up a few divisions. I would still try it as it will get results.

What is the recommended pitch size for this tactic?

However the instructions / role doesn’t match with the text and screenshots you’ve made, in some places.

Which one is correct? The tactic or the text? :)

This tactic does not work in the current patch anyway Richard as stated in the post it was made for the early releases. There will be a new system released on Wednesday so watch this space.

I have been using this tactic with Chester FC and worked great until I got to the Championship. It may be just because I haven’t signed quality players, but they seem to get a ton of yellow cards every game. The suspensions make it very difficult to field a solid lineup each match. Any tips on avoiding this issue? Or should I use a different tactic for the Championship?

I personally would consider a new tactic at that level but which one depends on the standard of your team. If you want to persist with it then you need to consider the tips below as Knaps tactics are notorious for bookings and poor discipline. https://footballmanagerstory.com/fm-2020-top-tips-how-to-reduce-yellow-red-cards-in-fm20/

There is also a suggestion for a better option (but more offensive) at the top of this article. I used the 4-1-3-2 until around League One then switched the that system with York and ended up winning the Champions League.