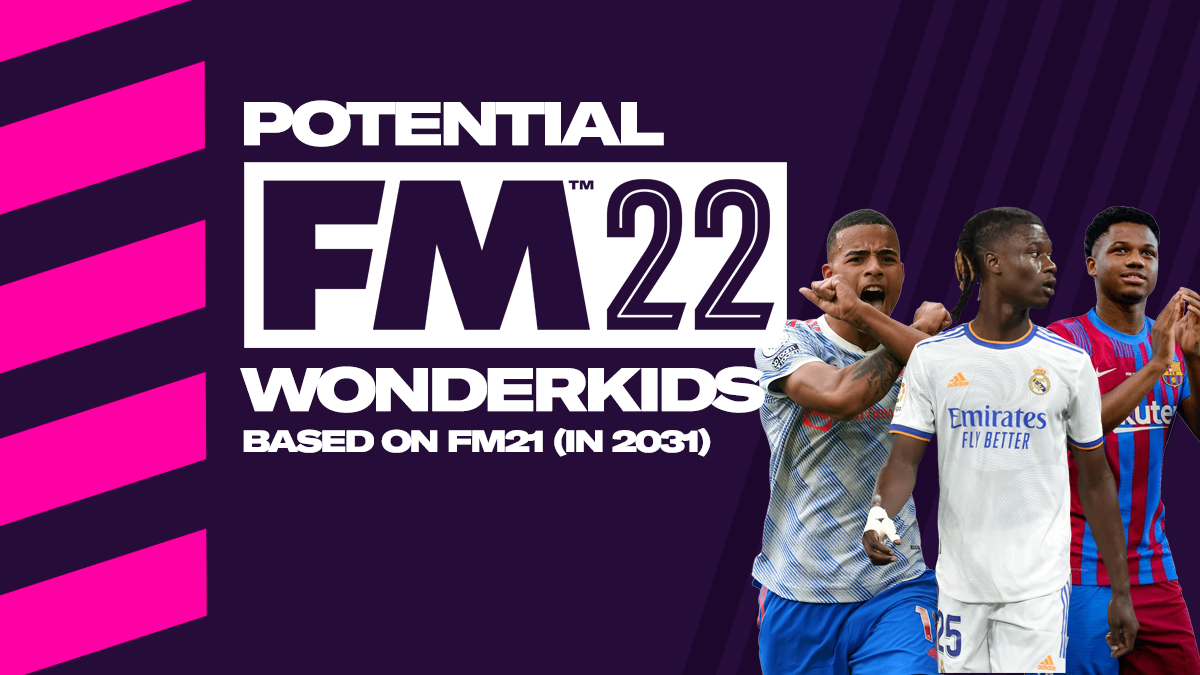 To predict the future, we have to look at the past, and in order to pick out the potential best FM22 wonderkids, we need to look at what happened in Football Manager 2021.

Once the beta is released we will be able to dive into the details of the game and see just who the FM22 Wonderkids are, but until then, we are going to take a closer look at the current game.

Potential is not a set number for a large amount of players, but there is usually a range. Youssouf Moukoko, for example, is just one of two players given the potential between 170 and 200.

If you didn’t know, every player in FM is given a current and potential ability between 0-200, the higher the better. Special players, you are looking for something above 150.

We have ranked them by Current Ability (CA) to see which players have developed the best and where they have ended up.

We then simmed through 10 years of football to see which of these kids would develop the best, and who would fail to make the grade.

There will be new additions to this list once the Beta is released, but the top 20 below will give us a great idea of who the Potential Best FM22 Wonderkids will be in the new game.

The left-sided attacking full-back has joined Paris Saint-Germain on loan from Sporting. He has already played in the league and Champions League for the Ligue 1 giants. In 2031 he is a physical monster who commands the ability to both dribble and cross.

Owned by Manchester City, the future is bright for the winger on loan from Manchester City. In our save it took a cool €71 million to prize the Serbian international away from the Etihad to Juventus.

Once part of the Villarreal youth system, but born in Pamplona, he was always destined for a move to Athletic Bilbao. After six seasons in their first-team the versatile midfielder took the same road as Ander Herrera, but ended up across the road at City.

After loan spells at Verona and Parma, RB Leipzig paid to take the Inter striker’s services to the Bundesliga. In 2026, Tottenham Hotspur spent €86 million. Only they will know if his 50 goals in five seasons matches the outlay.

Although of Serbian descent, the goalkeeper joined the Saint-Etienne academy when he was six years old. He has only played two league games for Les Verts, but is part of the France U19 youth set-up. After establishing as a first-choice ‘keeper he would play for Newcastle and Benfica before Barcelona came calling.

Safe to say, when you look at Musiala’s numbers in 2031, he doesn’t look like he has CA 165 talent. And that is reflected in his career, moving to Monchengladbach and then Rennes. Perhaps he is a player who needs proper training and guidance to fully unlock his potential.

All those green stats, if Demir in any way matches his FM career, he is going to be a hell of a player. PSG called first and then Hertha Berlin paid just over €120m to grab him. Three seasons later United spent €107m to sign him at 25 years old. Barcelona’s No.11 is destined to be a wonderkid for years to come.

Look at those mentals. Just incredible. Physically he’s a specimen and it’s no surprise to see PSG pay close to €90million for the defender. Looking at his stats, he could play in that defence for another five years without seeing a drop off.

The former Birmingham City youngster is going to be a sought after FM22 wonderkid, and for the next few games. He is already making an impact for Dortmund and England and is due a attribute rise in the new game.

Liverpool paid €109m to sign him in our save and you can see he continues to be a midfielder who can excel in most roles.

Seeing Greenwood as a 29-year-old forward is just odd, but you can see why FC Bayern were interested. He has fully met his potential and having a composure of 17 and Off The Ball of 18 makes his a world beater.

Although he did come up short as England finished third in the 2030 World Cup.

Everyone is still waiting for Adeyemi to make his big move, following in the footsteps of Erling Haaland. The impressive forward looks the real deal in 2031 and Bayern jumped first in 2023, before Real Madrid came calling for €98million three years later.

Elite left-footers are rare and the German is destined to be a top FM22 Wonderkid.

Having the Barcelona youngster fulfil his potential is a scary prospect. Those numbers for dribbling, finishing and first touch, combined with ridiculous physicals are just ridiculous.

No one would be surprised if in 2027 someone does pay over £200 million for his services, especially if he is anywhere near this good.

In FM22 Camavinga’s status as a wonderkid will remain, but starting at Real Madrid, you are unlikely going to be able to pick him up any time soon.

Mentally, the midfielder in 2031 is one of the best players you’ll ever see. Spurs picked him up from Rennes for €88m, only for Manchester United to sign the Frenchman for a cool 132 million.

It may take something similar to sign this potential best wonderkid in FM22.

You’ll be shocked to see Moukoko becomes an absolute monster. Barcelona makes a lot of sense and it only cost them €130m to grab him from AS Monaco. Physically he’s off the charts, and that combination of dribbling, finishing and first touch saw him score 20+ goals in his four straight seasons at the Nou Camp.

Admin: this was made using version 21.4