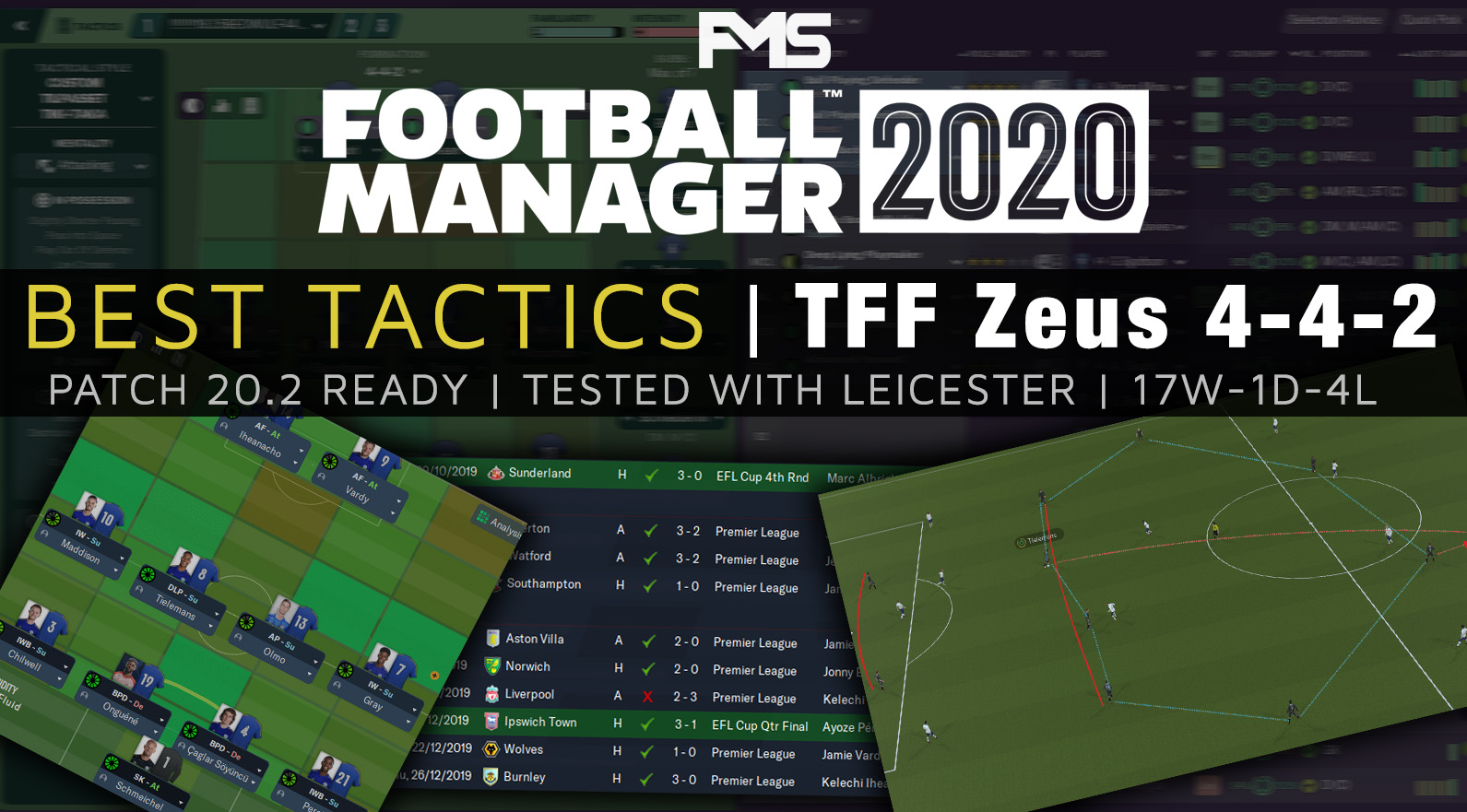 All our FM 2020 best tactics will be tested to patch 20.2 going forward. Today we analyze TFF’s Attacking Zeus, a 4-4-2 which exploits the match engines over powered through pass. TFF also deploys a low line to counteract the same flaw in defence.

Tactics which were successful prior to patch 20.2 now face problems post hotfix, largely due to balls in behind. Hopefully we have found a solution. This system is best used with mid-table to top half teams but can be used with top sides too.

Zeus utilises advanced forwards running in behind within a simple 4-4-2. A deep lying and advanced playmaker look for the early pass while inverted wing backs and wingers offer an option out wide.

The majority are on support duty and this becomes evident in the match engine. There is plenty of movement but only the two forwards look to truly stretch the pitch. 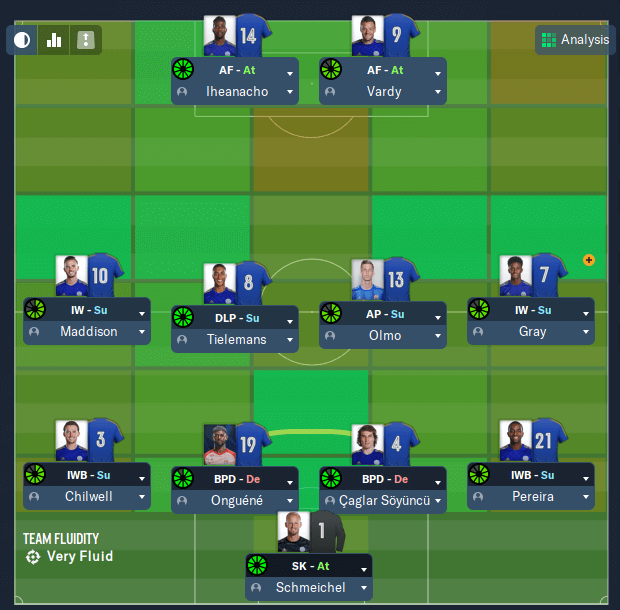 TFF uses limited but specific instructions. Aimed at finding high, quick passes in behind a direct style is enabled. The lower tempo keeps possession, a common problem to solve with all FM 2020 best tactics exploiting the ME. 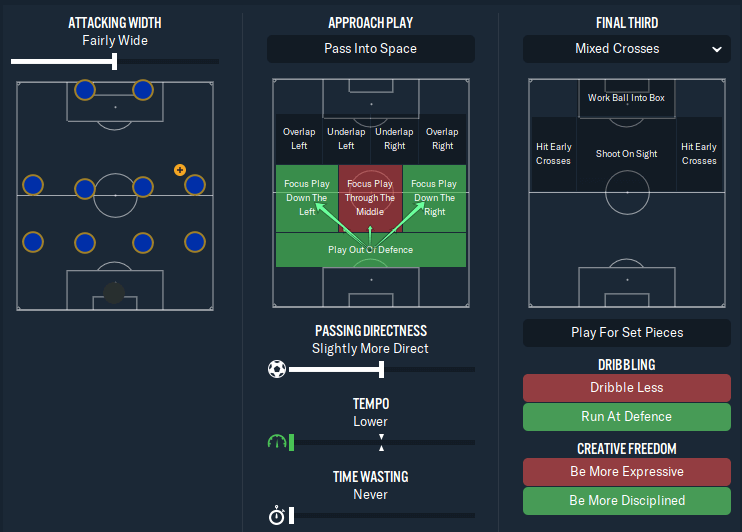 Common transition instructions are in use, other than ‘slow pace down’, which again helps us keep the ball. 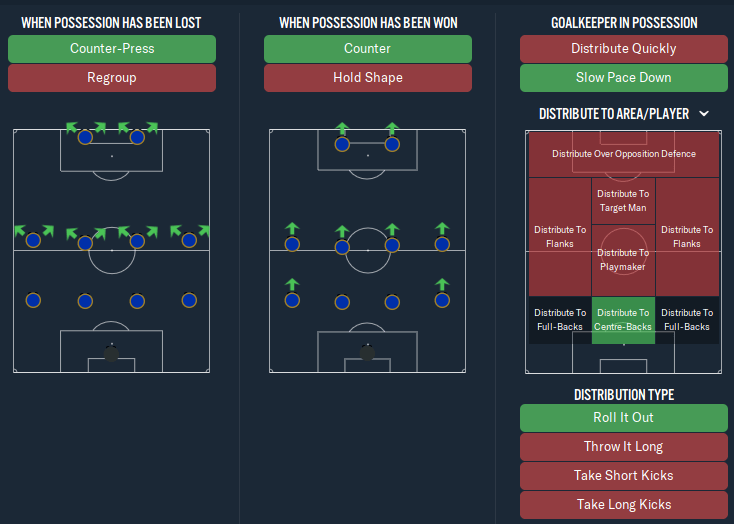 Due to the excessive goals conceded from balls in behind a lower defensive line is in use. TFF still utilises a high line of engagement to win back possession with extremely urgent closing down and individual player instructions of tackle harder. Be wary of this in match as yellow cards can easily turn to red without good management. 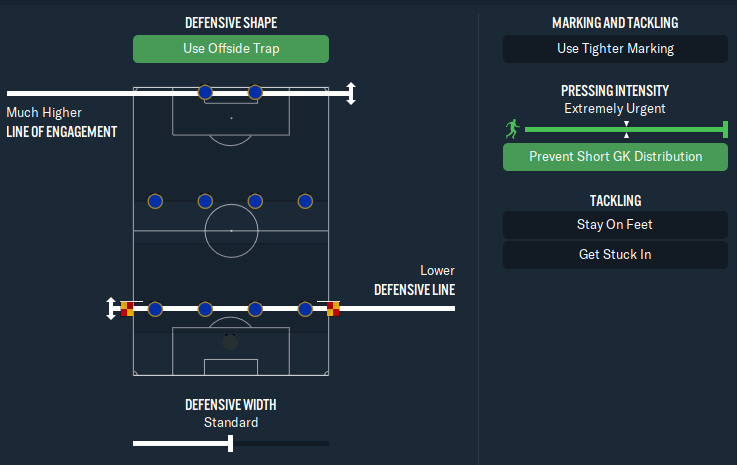 GK – sweeper keeper (attack) – Due to the amount of one on ones in this years game I’d look at attributes in this area for any keeper.

CD – ball playing defender (defend) – Ideally find centre backs who can pass and fulfill the role but I’d say its more important to have a towering presence. Speed is important to counter those annoying passes in behind.

DR/DL – inverted wing backs (support) – Very important to the success of this tactic these guys overlap the wingers. Fast, forward thinking wing backs will do very well in this system.

CM – deep lying playmaker (support) – The more stationary of our two playmakers, look for players with good passing and vision, basically as the role suggets.

CM – advanced playmaker (support) – A passing maestro the AP will link up play and search for that long ball over the top to your advanced forwards.

MR/ML – inverted winger (support) – Both wingers are inverted so MR should be strong with his left foot and vice versa for ML. These guys terrorise out wide and often cut inside finding themselves in a shooting position. Technical players are important but speed will go a long way also.

ST’s – advanced forward (attack) – The main goal threat good finishers are a must but speed is even more important. I found Selke, Haaland, Joelinton and Vardy a handfull here. You should look for speed, finishing and good all round physicality.

FM 2020 best tactics have changed with patch 20.2. Previously high lines and aggressive systems were the norm but chances in behind are a real issue in the new patch. Zeus uses a low defensive line as illustrated below. The defence and midfield tuck in leaving both strikers to stretch the pitch and latch onto that ball over the top. 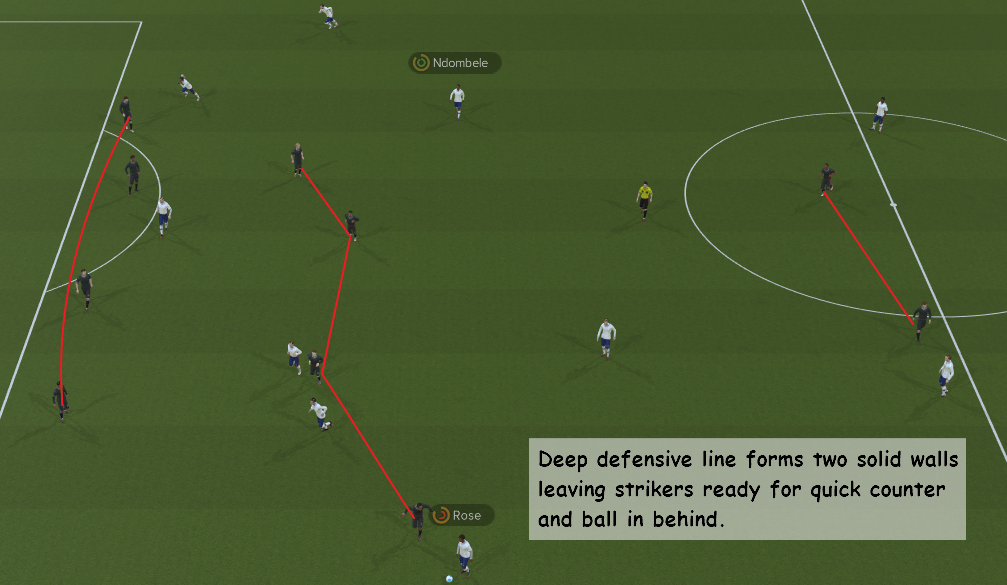 After winning back possession the team look for that ball over the top but won’t waste possession. The image below shows my DLP finding Vardy with a direct pass but note the many other options available. We can easily work the ball across midfield or switch play. 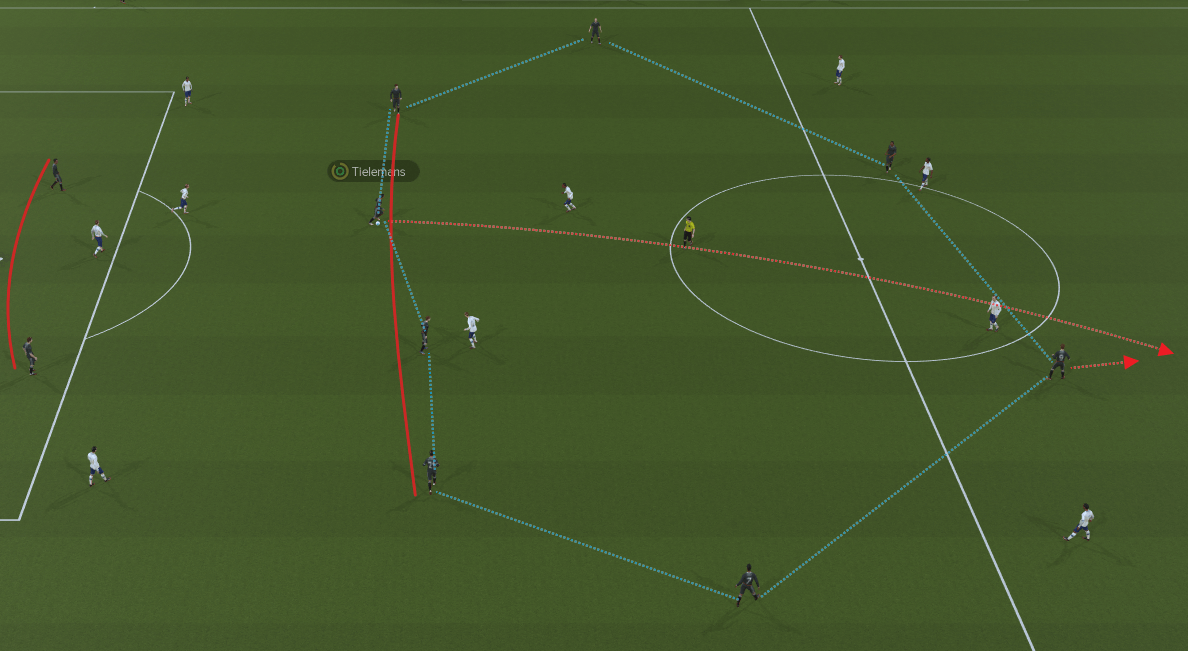 In transition and possession

Zeus does a great job getting bodies around the ball in transition. See below my ML has possession, DL looks to overlap while the MC’s offer a short pass. Both strikers are primed to get in behind, a recurring theme throughout. 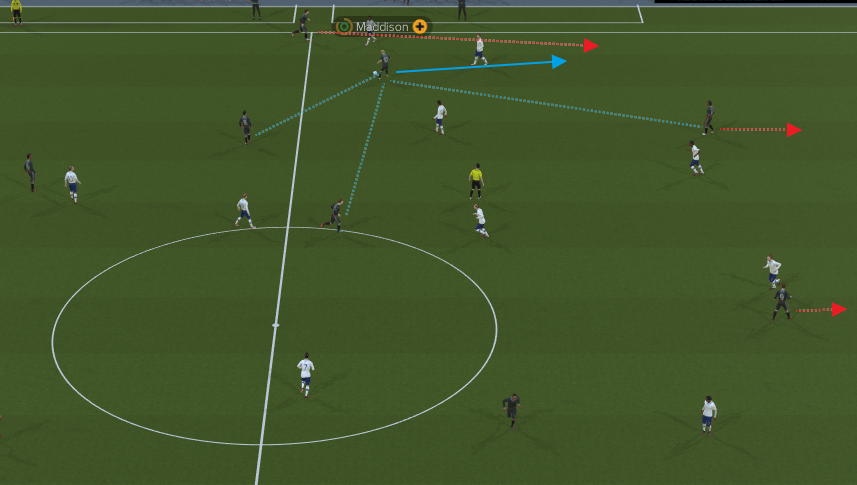 Every player on support duty looks to exploit the gaps in the final third. Tracking every run is impossible, this opens up space for your strikers and wingers out wide. 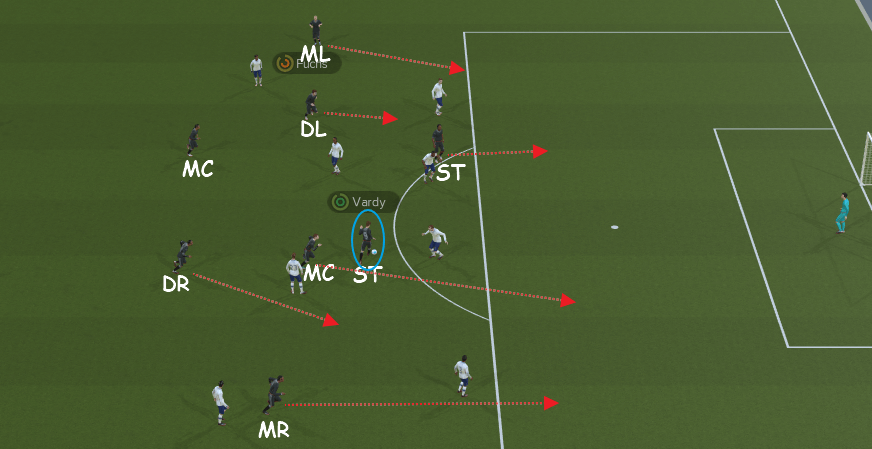 I used attacking mentality for most matches. The only time I changed was to cautious against the top teams away from home.

This is a judgement call, I don’t believe in a one size fits all approach and you will have to think for yourself. If you are in front and want to kill the game off, use TFF’s time wasting tactic, it can be downloaded here.

Finally, view mentality as a risk and reward formula. The more attacking you’re, the more open you will be defensively.

Some good results but the losses were frustraing, I think we created 6 clear cut chances against Newcastle. Unless you are prepared to use more than one tactic in tandem this is what you get. 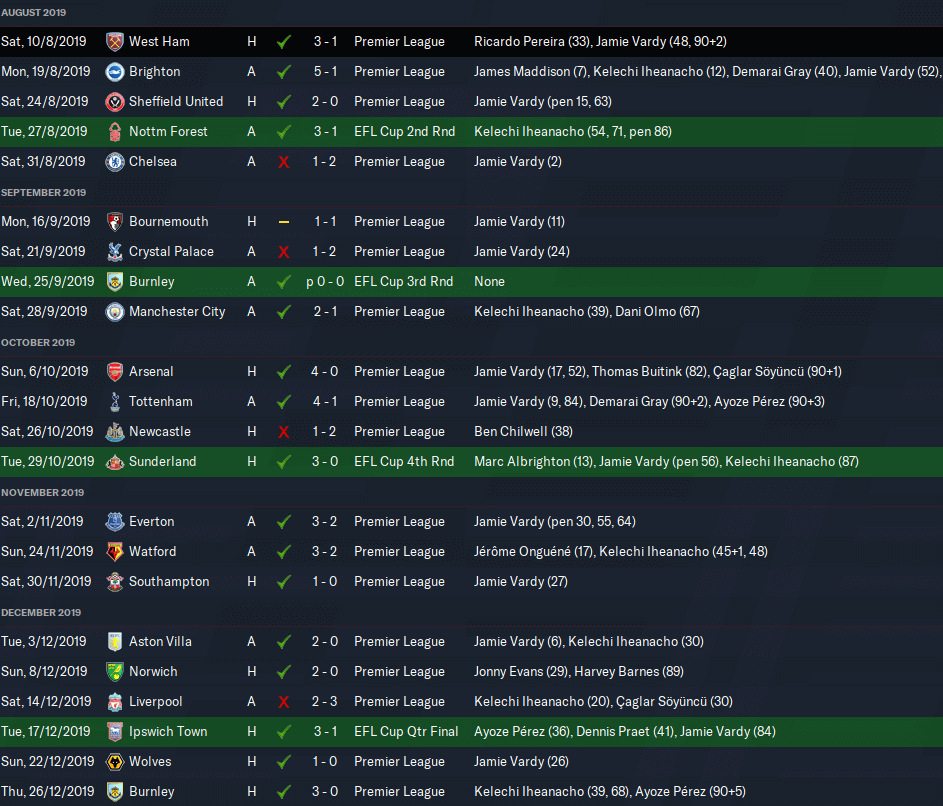 We’re on a cup run and fighting against the big boys domestically, a success considering the squad. I had no strength in depth and less than optimum players for each role. Vardy is overpowered, but Gray is not ideal as an inverted winger and Maddison on the slow side.

Note chances, 126 in total way ahead of the pack. Some games we saw 7-8 clear cut chances and should have walked over the lesser opposition.

Well rounded performances throughout but the star men were upfront. Its important to find great strikers and midfielders who can assist, stats were evenly spread across my middle four. 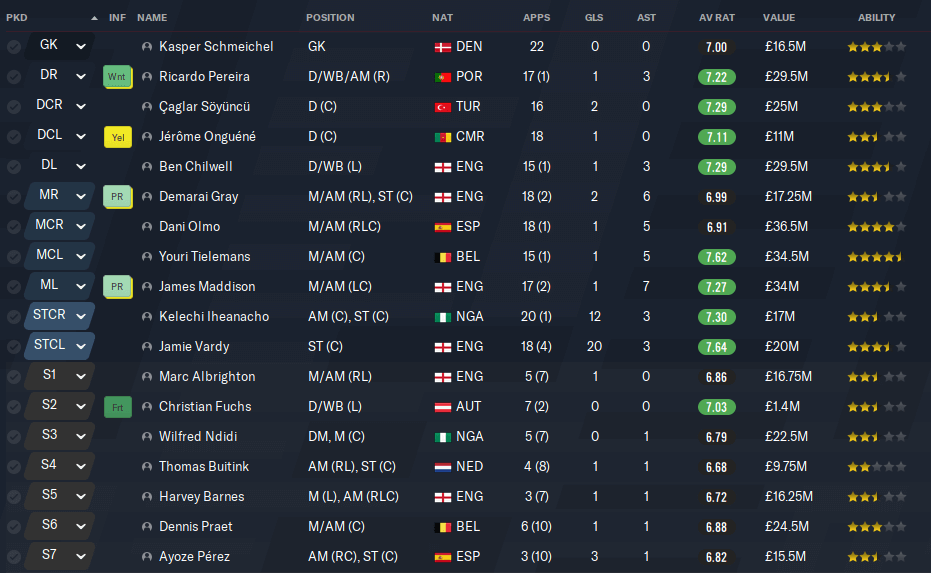 Thanks for the heads up John, doesn’t sound good though does it.