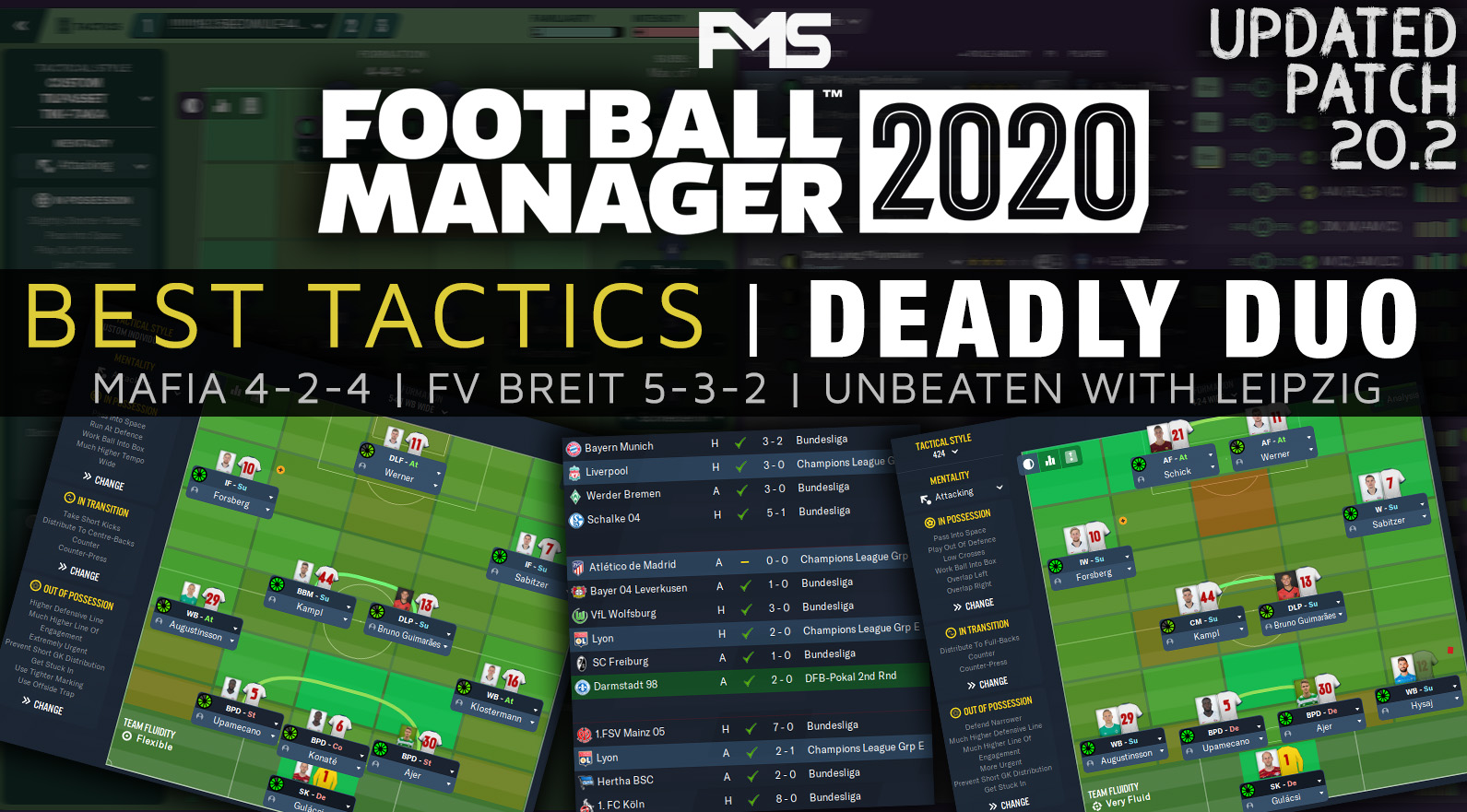 Hey guys and welcome to our best FM 2020 tactics for patch 20.2. Since the update you may have struggled for consistency, but we have found the answer in a two system approach.

Our default tactic is called ‘Mafia 4-2-4’ and the secondary more conservative system is named ‘FV Breit 5-2-3’. Both are good systems in their own right, but combined lead to my unbeaten run with Leipzig. We beat Livepool 3-0, Bayern 3-2, Dortmund 5-2 away, Athletico Madrid 2-0 and the highest scoring game? 7-0 vs Mainz!

Make sure you read this entire post, it is vital to follow the advice and understand when each system comes into its own. I have spent a lot of time testing this combination to understand their strengths and weaknesses. I will guide you through both systems as below. You can download them all at the very bottom.

Originally posted on FM Korea, Mafia takes the shape of 4-2-4 with an AMR and AML. For an attacking shape its secure defensively but can be found out against top opposition. Both strikers look to get in behind but also attack set pieces, AMR and AML pull the opposition out of shape while a plethora of players look for that ball over the top.

You will get a shed load of clear cut chances, Mafia works best for mid-table to top teams, I certainly wouldn’t recommend for the lower leagues. Lets move onto when this best FM 2020 tactic should be used before dissecting each role. 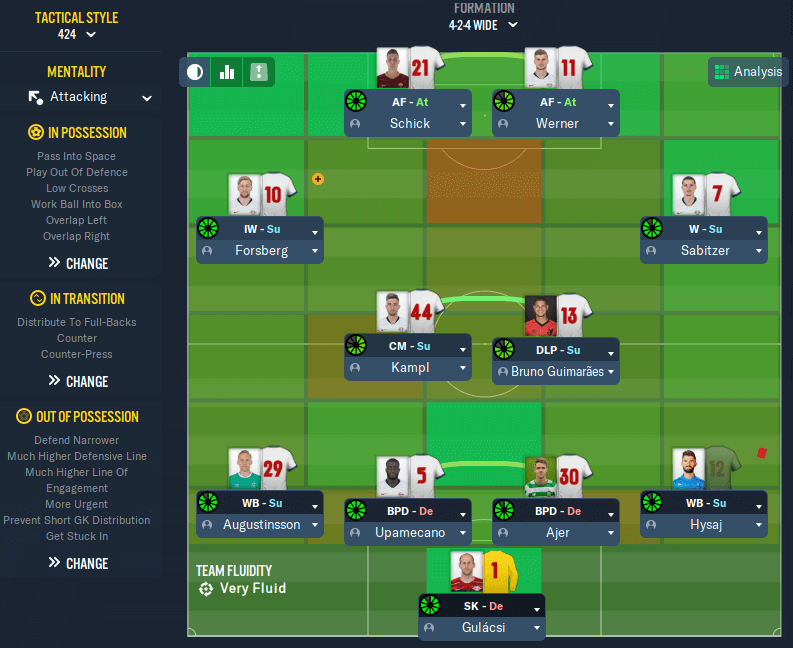 Here are the guidelines for using Mafia in order of importance, clearly some scenarios contradict each other. You may find it easier to understand our screenshot of results further down. This includes a marker for when each system was used.

1. Do not use v three DC systems at all – Mafia relies heavily on the ball in behind, three centre backs gobble this up and strike on the counter. Wolves and Sheffield United are a good example of this.

2. Do not use Mafia at home v ‘organised’ big teams – Organised big teams are like Juventus and Real Madrid. As above they will sit in, eat up the ball in behind then strike on the counter. Such systems eat into this tactic, I will offer specific advice further down on this.

3. Do not use Mafia away unless you expect victory – This system is risky, while it is organised you are committing a lot to the counter. Quality opposition will find you out especially on their turf.

4. Use Mafia when clear favourites

5. Use Mafia to get a late winner – I used FV Breit as a stable, feel the game out system. I would then switch to Mafia for the last 20 minutes if still drawing.

This bit is vital, do not skip reading about roles then bitch to me when you lose;

CD – ball playing defender (defend) – Ideally find centre backs who can pass and carry the ball out but I’d say its more important to have a towering presence. Speed is important to counter those annoying passes in behind. Ajer and Onguene are perfect buys for this role.

DR/DL – wing backs (support) – Fast but technically gifted wing backs are great. Look for crossing ability and passing. Both players will find the advanced forwards in behind. I enjoyed Augustinsson, Luca Pellegrini and Zeki Celik here.

CM – deep lying playmaker (support) – Great passing and vision are important but long shots will help as both MC’s do shoot from range. I liked Tonali and Dani Olmo.

CM – central midfielder (support) – As above but maybe a little more forward thinking so all round ability is important. Guimaraes will work.

AMR – winger (support) – You can switch AMR with AML, but be sure to adjust player instructions appropriately. The winger will stay wide and find your strikers in the box. Speed and technical ability are important. The AMR will drag defenders out of position.

AML – inverted winger (support) – This guy cuts inside to find himself in a shooting position. Fast, technical players are best and Forsberg was brilliant for Leipzig. I had Kluivert with Newcastle who consistently pissed me off with his terrible finishing.

ST’s – advanced forward (attack) – The main goal threat good finishers are a must but speed is even more important. I found Eposito and Haaland good but Werner and Schik were literally unstoppable.

Created by AD1990 this is the polar opposite of Mafia, making FV Breit a perfect counter balance. The three man defence turns five when out of possession and makes for a perfect underdog tactic in the top leagues. This system can struggle to break down negative opposition but soaks up pressure before striking hard.

I have seen many an upset using this system but that is what Breit is, an underdog tactic. Developed for earlier patches most have given up trying to make this work, it just isn’t potent enough. Used alongside Mafia however, it is perfect. 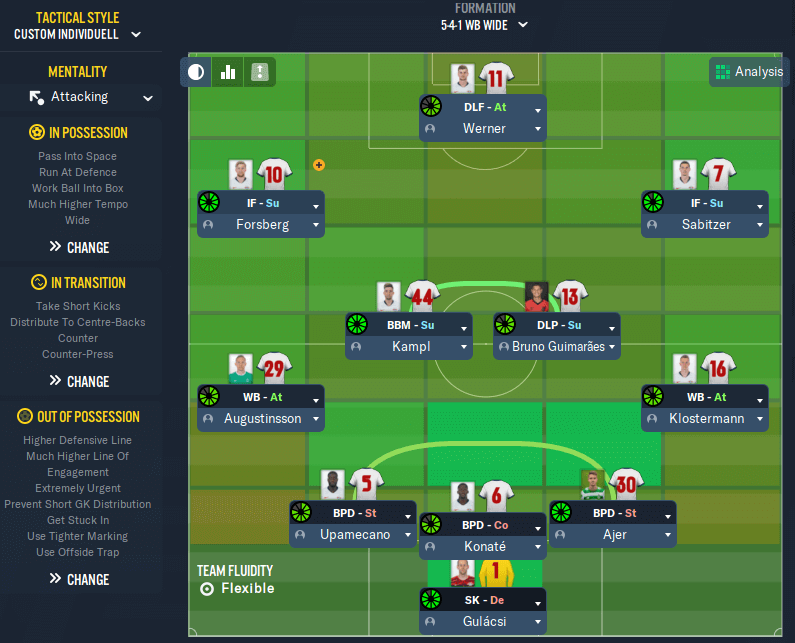 I have outlined when to use Mafia, but when should we use FV Breit? In a nutshell, the 4-2-4 is my default option and 5-2-3 our go to for tough opposition or to counter certain systems. So when should we use this best FM 2020 tactic?

1. Use v three DC systems – Almost all tactics will struggle vs three at the back. Its one of few systems which can handle the ball in behind so my approach is to fight fire with fire. Wolves and Sheffield United specifically are a nightmare to play against but Breit does a good job.

2. Use away from home – A safe option away from home I would use FV Breit unless you absolutely expect to win. If drawing at half-time consider switching to Mafia with 20-30 minutes remaining.

3. Use at home v big teams when not favourites – Do you attack the big teams at home or sit in? If in doubt use FV Breit and switch to Mafia in the second half. I would definitely use the 5-2-3 at home to Juventus, Real and Chelsea. The first two are so organised and use tight tactics, Chelsea play narrow and on the counter. I would go with Mafia against a 4-4-2, so Atletico are a good example.

5. Do not use when clear favourites – A test on FM Arena proved FV Breit does not work for out and out favourites, but does well for underdogs.

CD – ball playing defender (cover) – Ideally find centre backs who can pass but I’d say its more important to have a towering presence. Speed is important to counter those annoying passes in behind. Vallejo and Onguene are perfect buys for this role.

CD – ball playing defender (stopper) – Same as above but I really enjoyed Kristoffer Ajer in this role.

DR/DL – wing backs (attack) – Fast but technically gifted wing backs are great. Look for crossing ability and passing. Both players will find the advanced forwards in behind. I enjoyed Augustinsson and Luca Pellegrini here.

CM – deep lying playmaker (support) – Great passing and vision are important but long shots will help as both MC’s do shoot from range. I liked Tonali and Dani Olmo.

CM – box to box midfielder (support) – Maybe a little more forward thinking so all round ability is important and certainly good physical attributes. Guimaraes will work but Kampl did well for me with Leipzig.

AMR/AML – inside forward (support) – Always looking to cut inside these guys carry the ball and need to finish. Good technical players and speed are important. Lookman was good and Cengiz Under or Bowen of Hull worked well.

ST – deep lying forward (attack) – The main goal threat good finishers are a must but speed is even more important. I found Eposito and Haaland good but Werner was literally unstoppable.

When using Mafia 4-2-4 you may need to time waste with 10 minutes remaining, but Switching from 4 to 5 at the back is difficult mid-game. I use a time wasting tactic from TFF for this, its a 4-1-3-2 so the players slot nicely into it. No detail required here but be sure to tell any booked players to ease off tackles.

The combination of these two tactics lead to an unbeaten test with Leipzig. Averaging 3.7 goals a game we drew just once and won 7-0 on two occasions. I can guarantee we would not be top if using just one of these systems, but I’ll cover that further down.

Werner scored 1.5 goals a game and Schik 0.76 both avaergaing 7.97 and 7.82 ratings respectively. Now we move onto the interesting stuff, when each system was used. 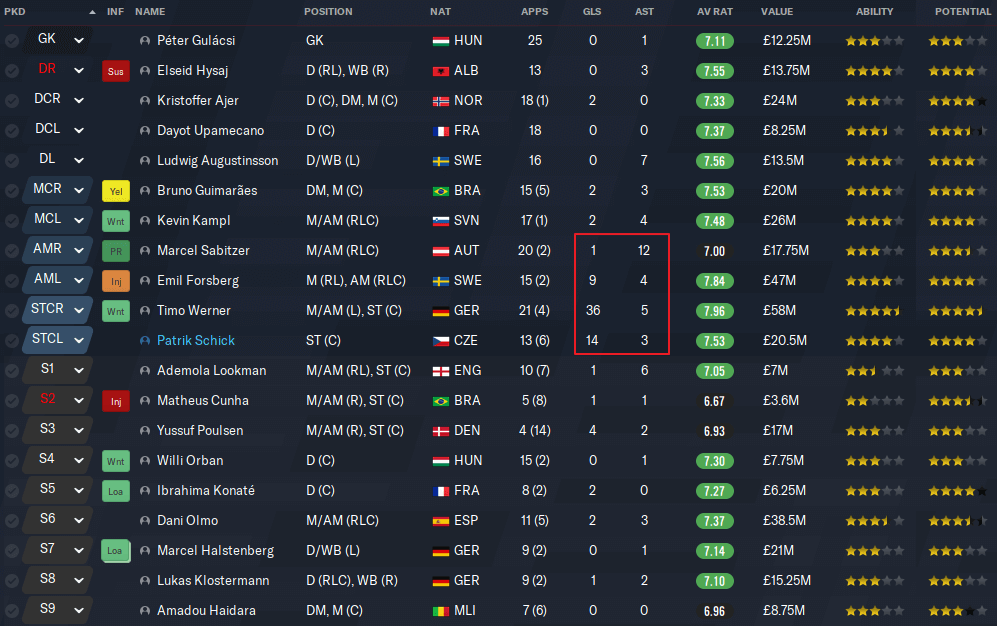 I went unbeaten with Leipzig by learning from my mistakes with Newcastle. I stubbornly used Mafia regardless of opposition. Despite winning well we lost and drew vital games to Juventus, Everton and Man Utd.

Note the instructions above to use FV Breit away unless favourites and at home against big teams. The Everton game fell under ‘not sure’ category so again, I should have used the 5-2-3. Also note that 3-2 victory over Sheffield United, they played 3 at the back and we were extremely lucky (remember we never use Mafia v three DC’s.) 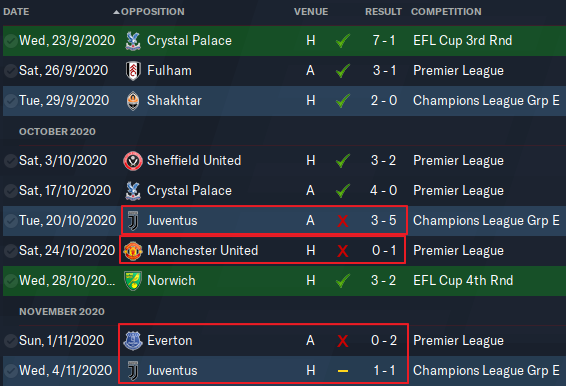 The next screenshot shows just one mistake and some exceptional results. Red dots represent Mafia, yellow is FV Breit. We beat Liverpool away, drew at Old Trafford and beat Spurs away using FV Breit.

The mistake came against Wolves, at this time I hadn’t recognised three DC’s as a problem for our 4-2-4. After that game I started using the 5-2-3 against such systems and thrashed Sheffield United at Bramall Lane, despite struggling in the corresponding fixture at home.

2. For Windows put the downloaded files in this folder: Documents/Sports Interactive/Football Manager 2020/tactics. If the “tactics” folder doesn’t exist you will have to create it. Windows users skip to step 2, Mac users read below.

6. Repeat this for all three tactics in 3 seperate tactic slots

If you read the whole thing, bloody good job and enjoy the reward. These guides take days to prepare so any social shares would be much appreciated. Please do follow us on social media for future posts in the series and if you would like to see me play live, follow us on Twitch here.

Can you show us results after 21/12/2019? Did you win Champions league with Leipzig?

I only run tests for half season as don’t have time for longer mate.

How do you get player faces on tactics screen?

Thanks for these – really impressive results with a Wolves save I tested this with. Early on in the season but I’ve been looking for an offensive / defensive tactic combo and this really does the trick well!

Good to hear Edwin thanks for the comment. I imagine Wolves would make an enjoyable save what with Cutrone and Jota etc.