The Blyth Spartans are making history and you get to witness that! Hello my friends, welcome to a new episode of the Blyth Spartans Football Manager 2009 story, more of a fairytale so far :) We were in 8th place in the Championship table at the end of October, very good for a newly promoted team with no money in the bank. We were pretty close to the promotion playoff places too, so a good run in the next games could push us to the top.

The first game in November was at home against one of the big disappointments of the season so far, Derby County. They should have been promotion contenders but the results gave them only a 19th place at the end of October. We had a good chance of winning it and my lads understood that perfectly. We dominated the first half and my young Lithuanian midfielder, Linas Urbsys, scored his first ever goal for the club! We scored again shortly after the break from a penalty kick and from that point on my players seemed to be content passing the ball around their half. Derby scored a goal and got back into the match but never really looked very threatening. A good solid home win, another 3 points in the bag. 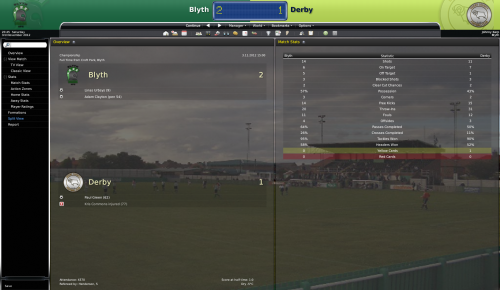 After the game Derby sacked their manager, Neil Warnock and I was the favorite replacement again ;)

Thanks, not interested. We had another home game ahead of us, a easier one against fellow newly promoted Swindon. They got promoted quite surprisingly last season from League One after the playoffs and now they were doing great in Championship, they were in 10th place! We were quite confident before the game and we were all over them right from the first whistle, we had 5 corner kicks in the first 10 minutes! They barely came out of their own half in the first 45 minutes, so the 3-0 half time scoreline was more than fair. With the victory already in the bag we played a lame second half, just waiting for the time to pass… The good news was that with these three points we were back into the playoff positions, in 5th place! 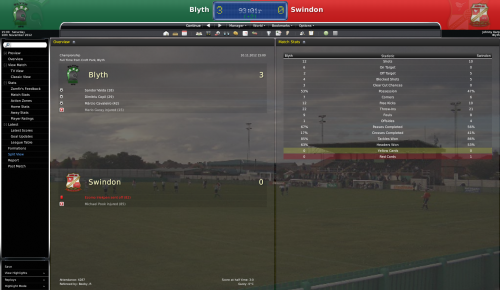 And the next fixture seemed to give us an opportunity to consolidate our position. We had to play away at Doncaster, the last placed team in Championship. They suffered three straight defeats before this game, so I hoped we would be able to give them the fourth ;) I had a look at their squad and guess who they have as a striker… Emile Heskey, now 34 years old! Anyway, Heskey or no Heskey, we had to win this. And it wasn’t easy, we played a pretty lame first half and it ended all square, 1-1. After half time we looked more determined but we just weren’t good enough to score one damn goal. When everything seemed to go wrong Oswaldo Chaurant took matters into his own hands again. He banged in a free kick from 20 yards out right before the final whistle, right under the bar! Phew, we won it but it was quite difficult. 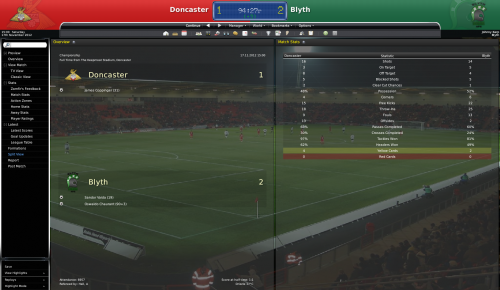 After three “easier” games we had a tough one to come, away at 9th placed Reading, a very strong team with good midfielders and strikers. And we were not looking too good as my first two strikers, Short and Yoneyama were injured. I had to send in the unexperienced Gary Horner and he played quite badly. The first half was even, there were chances on both sides but it was reading that converted. They scored another one right after the break and we looked quite powerless. They were very aggressive in midfield and we just couldn’t create enough despite having a better ball possession. 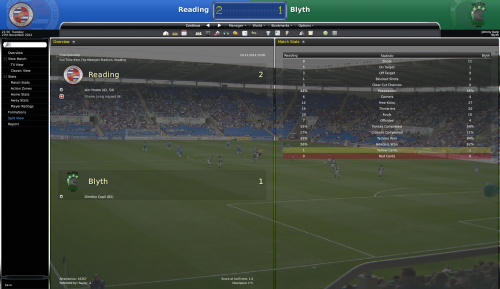 We had a chance to get back to winning in the last game of the month, at home against 18th placed Bristol City. We played well only in the first half but it was enough as we managed to convert our chances into goals. A solid 3-0 win with the help of our fans, we seem to be unbeatable at home. 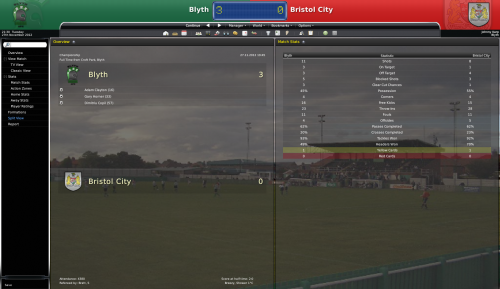 We were in 6th place after 18 games, 4 points clear of the 7th placed team. We had a bit easier games this month and it’s very important that we managed to win 4 out of 5, sometimes the “easy” games make the difference in a tight season.

Our best player this month was Romanian attacking midfielder Dimitriu Copil, he scored 3 goals in the last 5 games and was the leader of the team along with Oswaldo Chaurant, the player that seem to motivate the others when things are tough. 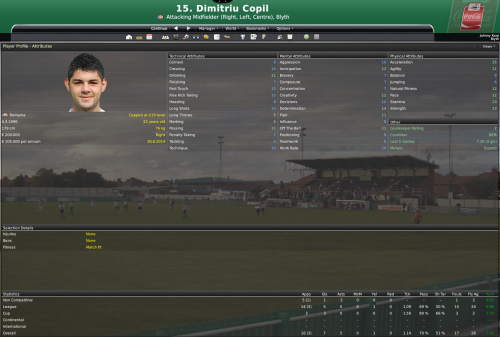 With these goals Copil (means “child” in Romanian) set a new record for the club, 36 league goals for the Blyth Spartans in his career! He joined us in January 2009, during my first season at the helm of the Blyth Spartans, in Blue Square North. He played well in the first three seasons but last year he had a lot of injuries that didn’t allow him to express his talent. Now he seems to be back on track and I hope he’ll be healthy and happy for the rest of the season :)

That’s how my Blyth Spartans played under the cold November rain, a good record of 4 wins and only one defeat that gives us hope for the future. The toughest game in December will be away at 2nd placed West Brom, a very good team that might give us a lot of headaches. But until then I enjoy looking at the table that lists us in 6th place :)

your gonna get the play-offs i bet

Curt, that would be fantastic but it’s going to be very tough, we’re not even at the halfway point of the season yet, so there’s still a long way to go. We’re always allowed to hope though ;)

Hi, Johnny great results so far. I have confidence in you to see another miraculous promotion. But i am a bit worried that your Blyth team is still a bit light to face Man utd, Arsenal etc. Do you set yourself any targets this season?

Yep, maybe one more year in the champioships could give you more time to improve the team for the big jump.

@Lye
Hey mate! I didn’t have a target at the start of the season but now I’m thinking about a playoff place. Getting promoted will solve the club’s finances and maybe they’ll give me some money to buy 3-5 good players to survive in the Premier League.
@Paine
Another year in Championship would be OK only if our financial situation will improve, otherwise I think I’ll be forced to sell a couple of players from the current squad :(

Looking good up to now. It will be a great achievement if you do make it to the Premier League next season, good luck.

Thanks for your latest remarks. But you know, now I am more curious about your team talks, set pieces strategies and press conf. handlings. For example, I never say “for the fans” when I am playing away while none of my fans are in stands:) Do you have any policies or tricks to share with me about those topics.
My comments about your answers; for me determination is everything, it is the main reason why the first gifted generation Rio Ferdinand, John Terry, Lampard or Xavi stay in the game such a long time. Team’s reputation is important about the odds, and I think the odds are determining the style of manager’s team talk. I am waiting latest news from Blyth (I revise my prediction I think you will promote) also your thoughts above. I am a Galatasaray (Arda, Elano, Milan Baros, Kewell, Keita, Servet, Leo Franco, Hakan Balta) fan and I think you support Steaua, Hagi’s army. What a player ! I like Rotariu, Popescu, Belodedic, Piturca and Filipescu. I live in past, I don’t like Mutu :) You had a superb generation once.

And Johnny please warn me, when you think that I am out of topic. Thanks!

Get in !!! Brilliant performance, Johnny!! You’ll definetely get into the play-off positions.

@Michael Cage
Thanks mate, just wait to see how December was ;)
@Celal
Hey mate, quite a long comment there :) I’ll try to answer as much questions as I can, so here goes:
– team talks – I use “for the fans” only for very special games, I think at most 5 or 6 in a season, depending on how the situation is. Most of the times I let the assistant take care of those and I only intervene when I think he picks the wrong options, that happens maybe once every 5 games or so, but not for all the players. You just have to keep an eye on the morale and also get to know each of your players, because they react differently according to their personality.
– press conferences – In my opinion these are quite useless, so I let the assistant handle the journalists
– set pieces – I always pick the takers carefully, the left footed players take the corners and free kicks from the right side and the right footed players from the left. As for the others, my strong tall centre back always challenges the goalkeeper while a short skinny winger is right there to pick up the eventual loose balls. I always keep 2 players in defense, usually the fullbacks. The other centre back will attack the near post, the others are around there somewhere :)
– I was a Galatasaray fan too when Lucescu was the manager over there, they had a great team back then. Hagi was a fabulous player indeed, I’m very sad that he isn’t proving to be a great manager too.
The topic is football, so you’re quite on topic, no problems there :)