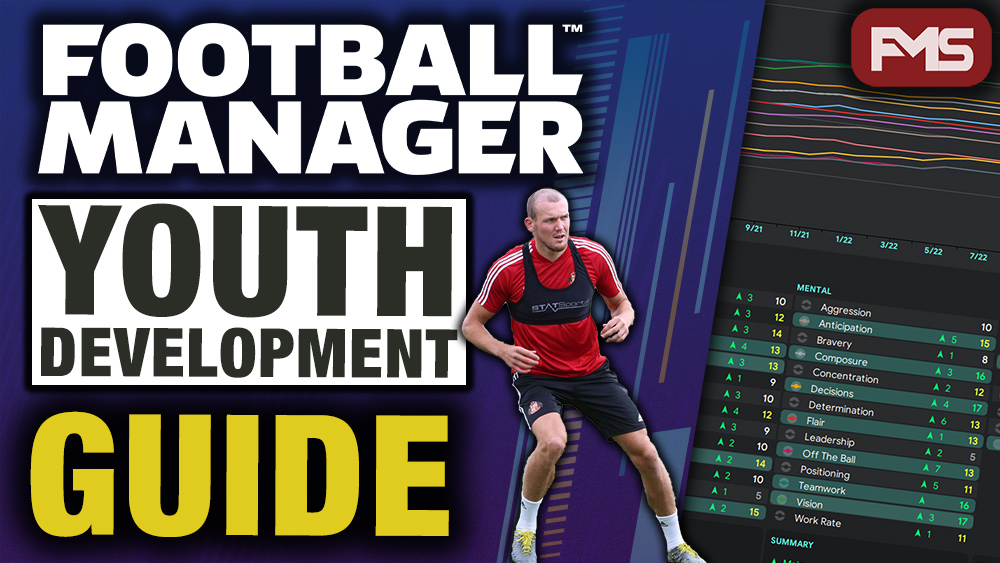 Hey guys and welcome to my Football Manager youth development guide. Here we go into great detail on a wide variety of subjects from training, game time and facilities to attribute weight, workloads and mentoring. This guide includes advice from Sports Interactive alongside my own personal experience.

Before we address the above, lets wet your appetite. The screenshot below is taken from my Seadogs Can Fly save. It shows how Salthella – a 20 year old False Nine – has developed over 5 years from the age of 15.

Salthella started in the seventh tier of English Football and played week in week out at every level until the Premier League. This guide explains what influenced such development.

We also have a video version of this guide shared below, for the full version carry on reading or watch the video for a more condensed version.

Many external factors influence youth development in Football Manager and most are misunderstood. Lets begin with your club infrastructure and what each facility actually affects.

Training facilities for juniors, junior players are not visible until brought through your youth intake. Youth facilities impact the development of newgens you are not yet aware of, they do not impact players already visible at your club.

The intake of juniors which impacts the quality of Newgens entering your club.

Dictates the quality and quantity of junior coaches, to be clear junior coaches are not visible. Junior coaching impacts Newgen quality, not your under-X teams.

The age old debate, should you prioritise game time or training? We will discuss Football Manager’s official advice in a second but remember this will vary on a club by club and player by player basis. Lets begin with my, against the grain, approach with Scarborough.

Game time is key within the lower leagues because you lack the facilities and staff to influence development through training. My Scarborough youngsters dubbed the ‘class of 2020’ are proof.

The youngsters who performed well developed and grew with the club. I offered first team Football to several young prospects aged 16-17 at every level from the National League North to Championship. These players trained with the first team and were treated like seniors despite, in large, being 18 and under.

I attribute game time to their development but more importantly match experience at a level just within their current ability. Quality performance is key and you can use the average match ratings as a yard stick.

To prove the importance of match experience over training in the lower leagues consider the fact I left team training to my Assistant Manager. Other than assigning players to work on relevant roles and individual training I played no role in training development.

Ryan Williams is a prime example of someone who excelled on the pitch year in year out, while remaining challenged enough to stimulate growth.

The best developers had Championship or Premier League potential, those with League Two and lower potential were slow burners and struggled to keep up. You should look for players with a high ceiling regardless of your current level. Another example from my Scarborough save is Salthella who now looks capable in the Premier League.

While I chose to train youth in the first team and play them week in week out, Sports Interactive recommend a different approach which I feel is very relevant to top flight teams training under 18’s.

This approach only applies if you have great facilities and coaches, I will use @SebWassell’s Twitter feed to explain. Seb is a Designer for Sports Interactive so if anyone knows FM game mechanics, its him.

According to Seb young players need both training and playing time throughout their career to develop. Under 18 year olds should focus on quality training while over 18’s should focus on an appropriate amount of game time.

Equally as important is the type of training, young players need more rounded training and can handle more physical work which ties in with their capacity to improve physicals more during earlier years.

The key to all of this of course is managing workload. Fatigue your players with too much game time and they will not develop as well in training through their optimum growth years.

Working With Youngsters applies to coaches in the Under-X team pic.twitter.com/VbPpuvGEdO

Develop The right Attributes At The Right Time

Attributes grow at a varying rate through the age groups. Understand the guidelines below and you could dramatically improve your Football Manager Youth Development but bare in mind some players can be outliers and this is a guide not a rule.

Physicals will generally be developed by the age of 24

– Strength & Jumping Reach can develop and be retained later

Mentals develop best from mid to later in the player’s career, but this does not mean they cannot develop early on

Most Mentals are retained well as the player ages

– Bravery may drop with serious injury. It can be recovered – https://t.co/lb0ll7jgYp

So we should target different attributes for youth team players; with this in mind I would suggest training youth players separate to the first team.

Our focus should be on developing physical attributes in that optimum age range (upto 24.) If you have great ‘training facilities’ and ‘under 18 coaches’ I would recommend training under 19’s using ‘youth schedules’ tailored to physical development and well rounded training.

Note: Unless you have a full compliment of U18 coaches with minimum 4 star training development will be hindered and it may be worth reverting back to first team training. This was the case with my Scarborough save.

Not All Attributes Are Equal

Not only do attributes develop differently for each age group, they are weighted. By weighted I mean the amount of current ability they command, Acceleration for instance takes up more current ability than balance and the exact amount can vary by position.

I go into more detail on attribute weight in this post but the table below summerizes well (all credit to MikaelinhoFM.) Consider how much current ability each attribute costs.

Optimizing workload is vital; I rotate first team youngsters to a) spread development and b) avoid fatigue. I set each players training intensity to ‘automatic’ so it picks up on the team intensity guidelines, which are set to the screenshot below. The idea being we work hard when feeling fresh and ease off as fatigue builds up.

Each player trains in the most appropriate role, this is not always the role they play in but the role which targets a group of attributes I would like to increase. Role training develops the attributes for said role but does not aid a players familiarity within the role, role familiarity does not really exist. You can however aid positional familiarity through training and I ensure each player trains in their matchday position. 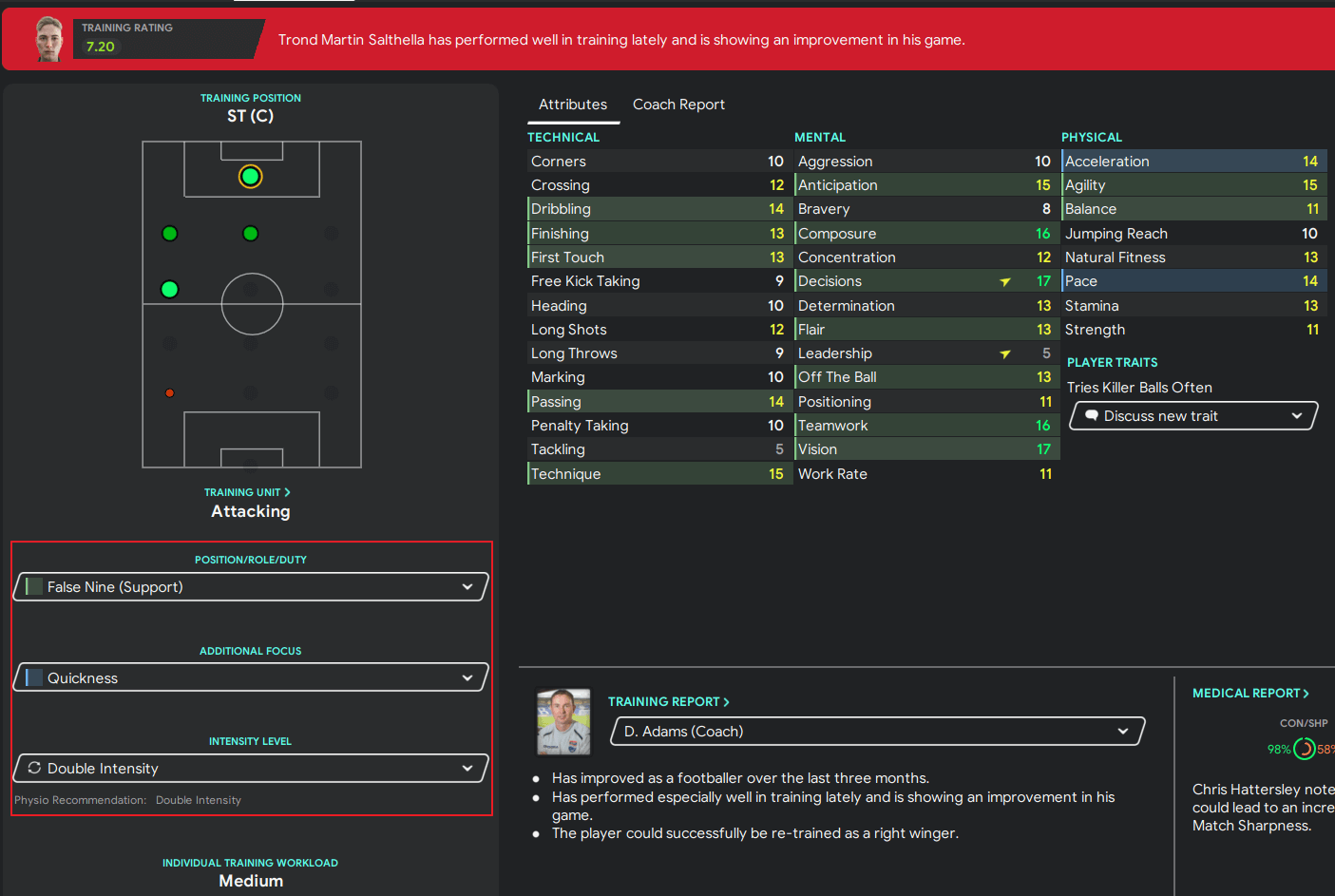 Finally I always set individual training and use Seb’s age specific guidelines as a pointer. Under 19’s work on quickness or agility unless neither are a weakness, I then target specifically low technical attributes and lastly mentals. Salthella for instance had low speed, off the ball and finishing so I switched between the three periodically favouring quickness training early on.

The higher your players potential the faster he will develop to reach it, add a great personality and he could jump through the Divisions season in season out. Trying to develop a player with poor potential or a limiting personality is pointless. I targeted the player types below with Scarborough and found those falling outside the mould failed to progress.

To better understand what to look for in wonderkids read our scouting guide and understand the best personalities for development here.

You can of course mould a players personality and while this is limited it can be effective. Seb explains best below.

– This shift happens between players in the same squad

❗️ This happens regardless of Mentoring ❗️

– Mentoring allows you to bias it towards a specific group of players pic.twitter.com/AtLlUhzFxU

Factors that impact a player’s estimated influence include…

⌛️ – Players are less likely to be influenced by others after the age of 24 pic.twitter.com/NpWfDcg3mg

I bought the four highlighted players below purely to pass on their desirable personalities, none will feature for Scarborough. I throw such players into a mentoring group with the youngsters requiring improvement. This only works for older players because new signings have no real influence other than age.

While your entire squad influence each other, mentoring groups can hone in on specific traits you’d like to pass on. Players from the same social groups will pass on traits best so I try to sign as many of these ‘carriers’ as possible in the hope we cover all social groups. I look for personalities with high professionalism, ambition and determination as these impact development directly.

It is best to mentor by position, but this requires a large number of leaders and desirable personalities. 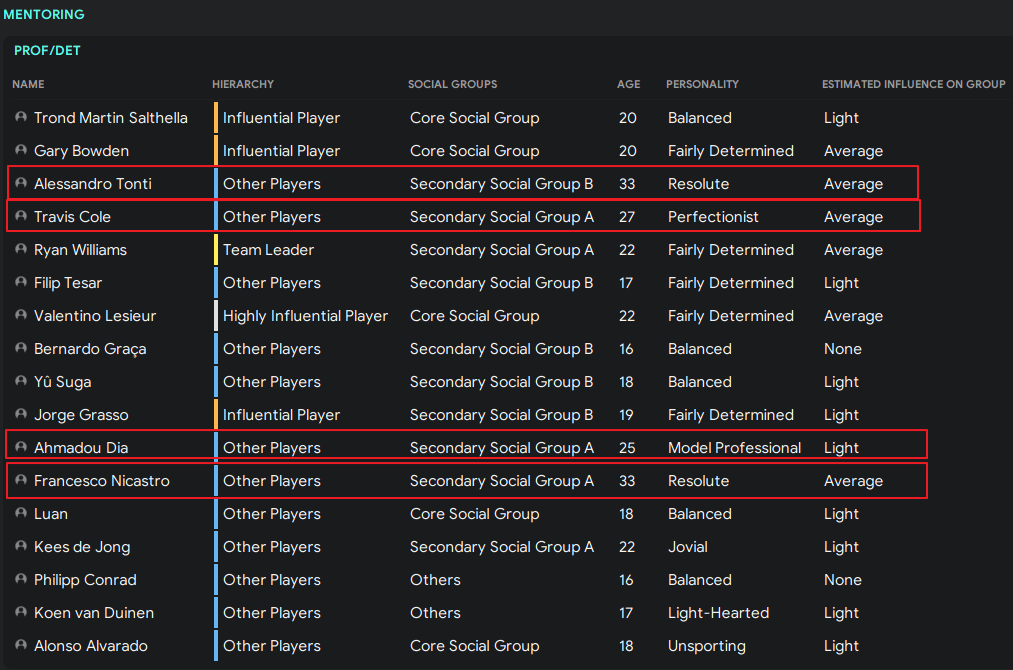 In summary you should approach youth development in Football Manager according to level.

That is all for today folks, I hope this guide has helped and please feel free to jump in the comments with any questions. If you would like to relive the development of the wonderkids featured today, why not binge watch my ‘SEADOGS CAN FLY’ series on Youtube.

So lets say i have a really young team as my starting 11. Should i focus my training on physicals or will those attributes go up automatically cause its young players? I gues you can boil my question down to, SHould you boost the attributes that the age group develop easy or should you help them with the ones that they dont develop that quickly?

As the guide says I personally think you should develop the physical attributes while you can…you can increase the rest throughout their career but you only get one shot with physicals. I find by very early 20’s these attributes become hard to increase, for agility, acc and pace at least.

In a nutshell target the each set of attributes in their prime growth years. Young players have the CAPABILITY to increase physicals faster, this does not mean they will increase on their own without stimulus. Of course, if you have a player with already high physicals there is no need to focus on them. Hope that makes more sense.

Okey, i guess i will do that through individual training then, aka focus on quickness. Thank you for a quick answer. I will try to take a lower league team to the top with only homegrown players and this guide will be very helpfull to achieve that!

If that is your goal the only way it will work is to get players with high potential, ie Championship or above otherwise they will never progress quickly enough. At least that is what I found with Scarborough Athletic.