Hello folks, welcome back to the Notts County Football Manager 2010 story. The year was over, a great 2010 was now behind us. After gaining promotion from League Two we proved to be a very competitive team in League One two, we were top of the table at the end of December. Even more, we were still involved in all the cup competitions after knocking out Championship sides and even Premier League team Liverpool!

Hello folks, welcome back to the Notts County Football Manager 2010 story. The year was over, a great 2010 was now behind us. After gaining promotion from League Two we proved to be a very competitive team in League One two, we were top of the table at the end of December. Even more, we were still involved in all the cup competitions after knocking out Championship sides and even Premier League team Liverpool!

The new year started with another “mission impossible” cup game, at home with Premier League side Fulham in the 3rd round of the FA Cup. The game couldn’t have started better for us, Adam Szalai pushed in a great cross from Kamil Grosicki, we were in dreamland! We continued to play well throughout the first half and missed another good chance to score before the break. The second half was a different story, Fulham were pushing forward and we were literally under siege in the last 20 minutes. Despite defending pretty well we did let one in, so the game was going to be replayed at Craven Cottage. We missed a good chance to go through to the next round, I expected a much more difficult away game. 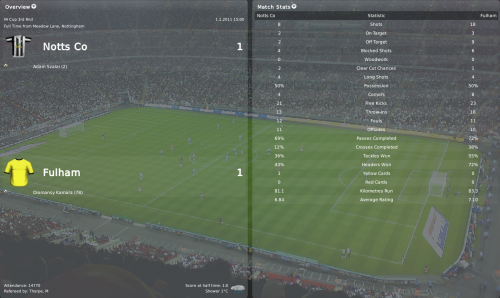 The transfer window was open again but I felt we didn’t need any new players. I did let go some of the fringe players in my squad and bought only one new player, Hungarian regen right back Gergely Varga, a good 19 year old prospect.

Let’s get back to the matches, we had the Carling Cup semi final coming up! The first leg was away from home at Championship side Preston North End. I felt we had a good chance to get to the final but we had to fight with great determination. It didn’t start well for us though, Preston scored with a powerful shot from 25 yards out in the 7th minute. My boys reacted well and 16 minutes later Parvulescu whipped in a good cross from the left and Tomas Pekhart headed it in! The lads were showing enthusiasm out there and eight minutes later Pekhart dribbled through the defense, passed it to Andreev and he scored into the open net! We even had another great chance before the break but I was satisfied, we were 2-1 up. We played very well in the second half too, created lots of chances but missed them. And you know what happens when you miss too much, the opponent punishes you… Anyway, 2-2 was a good result, we had the chance to earn the qualification at Meadow Lane. 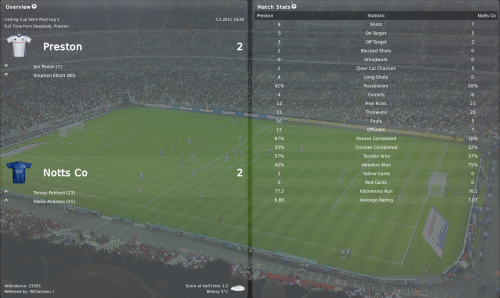 The first league game of the year was away at 21st placed Shrewsbury, it was supposed to be an easy game for us. It wasn’t too easy though, Shrewsbury‘s overcrowded defense was tough to crack. Tinga placed the three points in our account with a long shot before the break but despite the win we had things to worry about, Muniesa and Mellis were injured and were going to be out for around a month. 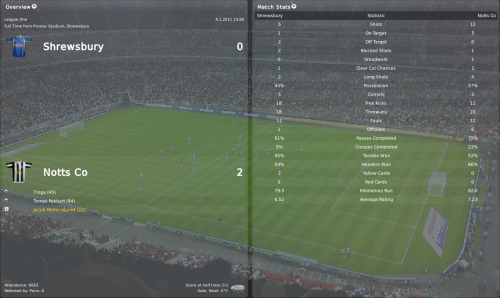 Next up, the first leg of the Johnstone’s Paint Trophy North final, Blackpool were coming to face us at Meadow Lane. And they brought the bus with them and parked it right from the start. It was very difficult to find space through their defense so we were forced to try long shots. Unfortunately my shooters were largely wasteful and when the shots got through the keeper and the woodwork saved Blackpool. We’ll have to earn the victory away from home in the second leg, hopefully we’ll show more inspiration then. 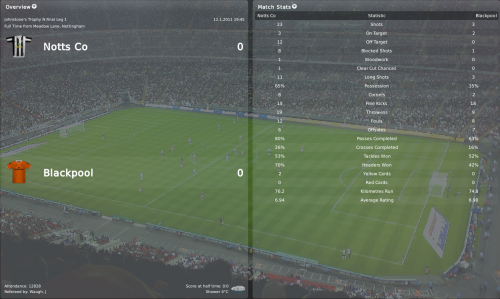 The next game was the FA Cup 3rd round replay, away at Premier League side Fulham. Everybody said that we had no chance of getting out of there in one piece. It certainly looked like a siege, especially in the second half, but things went our way somehow. Sabrin Sburlea finished off a blitz counter attack right before the break, that gave us something to defend in the second half. Kasper Schmeichel was outstanding in the last 45 minutes, he made some absolutely unbelievable saves. We defended with great determination and we pulled off another upset! And guess who’s coming in the next round… Arsenal! 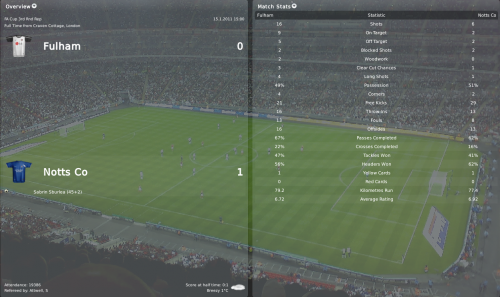