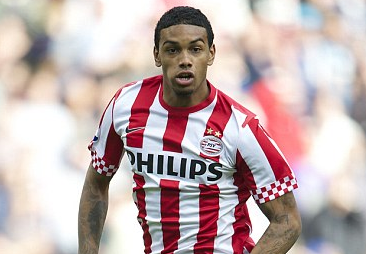 Jurgen Locadia started playing Football from the tender age of five, signing on with VV Bargeres. FC Emmen then identified his talent, before Willem II came sniffing. It was this move that propelled Locadia into the big time as PSV signed the wonderkid at just 16 years of age.

This Football Manager 2014 wonderkid scored on his cup debut at the age of 18 and is one of few to score a hattrick on his Eredivisie debut. Where Locadia roams goals seem to follow and this ability has seen the hot prospect labelled the next Patrick Kluivert.

Most of Europe will be watching this kid, as he seems to be improving year on year and I think FM 2014 will see this wonderkid shine. There are certainly few forwards with such a raw eye for goal and ability inside the box.

What should we expect from this FM14 wonderkid? In my opinion, flexible PA but a high rating. Finishing, composure, pace, acceleration and off the ball movement should highlight his key attributes, which would suggest a preferred role of poacher. And most importantly, I’m expecting lots of goals.

I didn’t really know much about him but that is a fantastic record for an 18 year old. May well be on my buy list for FM14 :)

Yeah he certainly has the record of a clinical finisher, lets hope SI rate him highly this year.