FM Guide: How to Turn Around Your Team’s Morale 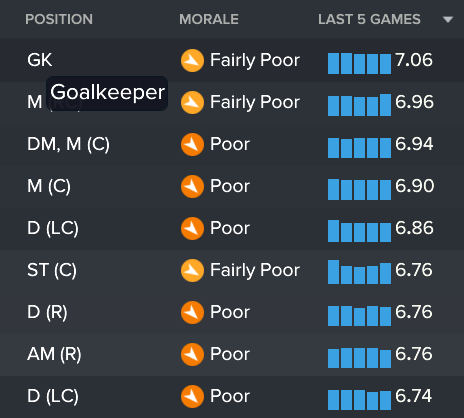 This Fm guide is about leadership.

Sometimes you can be managing a team which is in great form, leading the league, all the lads are happy and the atmosphere in the dressing room is great. However, you then come up against one of the teams at the bottom, whom you should beat easily, but your strikers get complacent – missing many clear cut chances. Then, on the break, with the one single shot your opposition had on target all game, they score and you lose. Your team are disheartened and in the next game you have to face one of the top teams in the league. Once again, you lose and things are not looking promising for your team.

Suddenly, the once green arrows of the team’s morale are turning red and some players are voicing their displeasure with the team’s league position to the press. It’s time to show your leadership skills and get the team back on track, focusing on the mental aspect of the game.

Here are some thing you can do to get the players morale back on track and to motivate them, guiding them back to victory:

*While playing friendlies during the season, rest players everyday.

I was doing great in my save managing FC United in Vanarama National. I lost two matches and the team’s morale was going down after an amazing pre-season….

Firstly, I went to talk to all the players who were in poor form, so that the rest of the team knew that was not going to be accepted. This also motivated the individual players to get them to start playing better. Then I had a chat with the player who had been playing well, to praise him and to make him a role model for the squad, as well as making sure that he continues to impress. Now, I arranged a friendly game with the weakest opposition I was able to find. After this, I organised a team meeting before the match, inspiring the team to gain their confidence back! As you can see, the team meeting went down a success, with many of the players’ morale improving from OK and average to good and superb already!

Now for the friendly match. It was a 6-0 romp, giving the players a morale boost. Look at the final results of this plan, every player has a near-superb morale before my next game in Vanarama National. Now, just to make sure that I rest my players before their next game and all in all this has been a huge success.

A final tip in this FM guide is to use this before your team’s morale starts to drop to very poor, if you manage to do this whilst most are at average levels of morale, starting to turn poor, then you will find yourself with a motivated and inspired team by your next game!

Do you have any extra tips for raising team morale? Be sure to let us know in the comments below!

How to re-train a player for a new role/position in FM 2017
FM Guide: The Most Important Things to Consider When Buying a Player
wpDiscuz