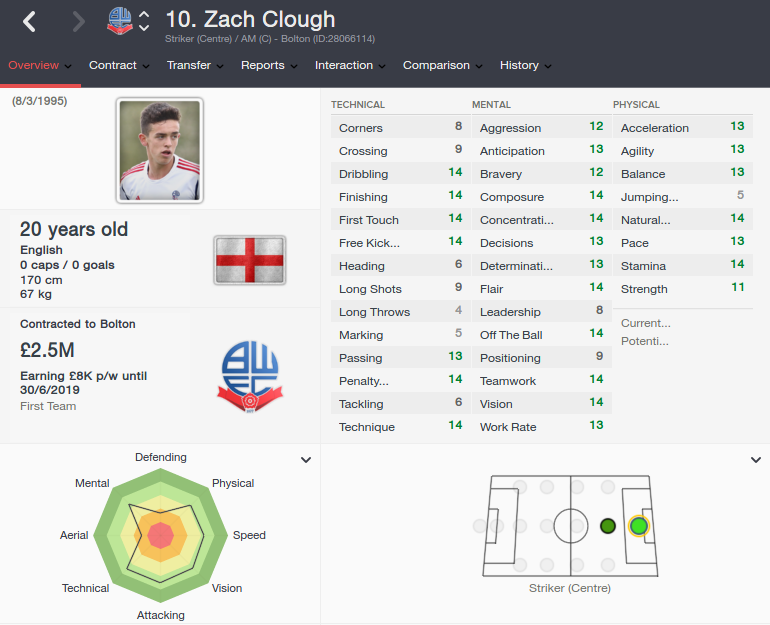 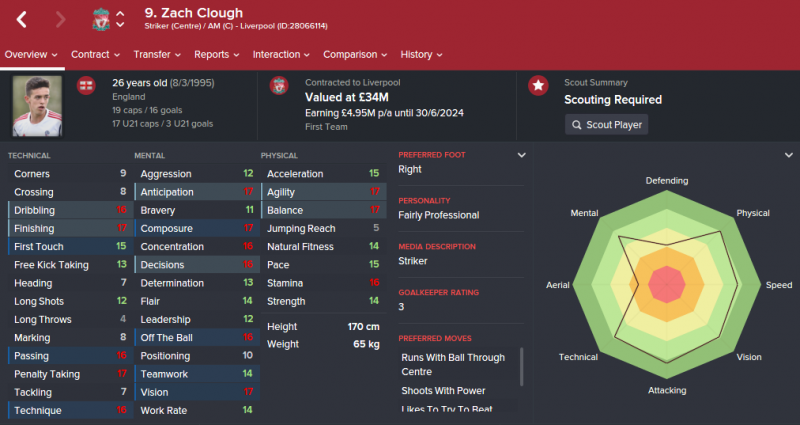 The FM 2016 player profile of Zach Clough shows a very talented and prolific English striker, a forward that could become a top goalscorer at the highest level. If you manage a top club you could buy him right at the start of the game, if not then you will have to wait for an opportunity to get him for a cheap transfer fee but the odds might not be in your favour.

In my test save he bagged loads of goals in the Championship, contributing to Bolton’s promotion to the Premier League. He continued to score steadily in the top flight and eventually Liverpool decided to spend no less than 52 million pounds on him. He delivered 29 goals in his first season at Anfield and scored loads in the second season as well. He also became the first-choice striker for England, bagging 16 goals in 19 appearances.

He is a typical false nine, he isn’t tall and he ain’t strong either, but he is very quick, has excellent movement off the ball and great vision, complemented by superb technical skills. If you need a false nine in your team then this kid should definitely be on your shortlist.

Absolute beast for me on FM15, best striker I have ever had in any version hands down and I have been playing for 16 years.

In my Bristol City save he won the Ballon D’or, broke Andy Coles premier league scoring record with 36 goals in the league, 55 goals in 45 games in all competitions and had 20 in 22 for England.

Perfect false nine playing up top on his own with the right tactic, destroyed smaller teams, pretty much guaranteed hat trick at home to anyone in bottom half.

He looks identical in this years version and he will be the first player I will look to sign for any team and I encourage everyone to do the same.

Quite impressive, hope he does at least half as good for you in FM 16 ;)