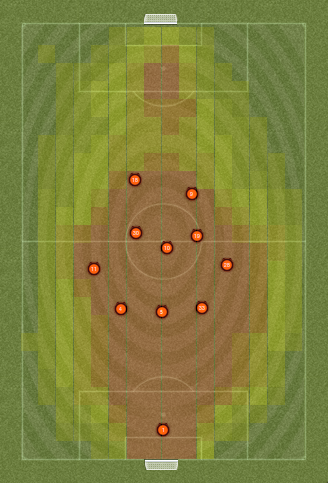 This FM 2015 player profile of Munir shows yet another product of the Barcelona youth academy, a versatile striker loaded with potential. Munir starts with good ability and could feature as a utility player for any club as demonstrated in my save, Barcelona afforded the hot prospect 18 games, some off the bench but a statement of talent all the same. With excellent technique, flair and agility Munir isn’t just a striker, he could also come in off both flanks or at a push play behind a lone striker.

In my test save Munir developed great off the ball movement, first touch and dribbling alongside the above mentioned. I reckon he’d be devastating in the more creative roles, like trequartista, or inside forward, very tough to track and defend against. Juventus surely thought so, coughing up £31.5 million in 2018.

Check out the future screen shot below, sent by Alex Fourguson, showing Munir in his game in 2016: 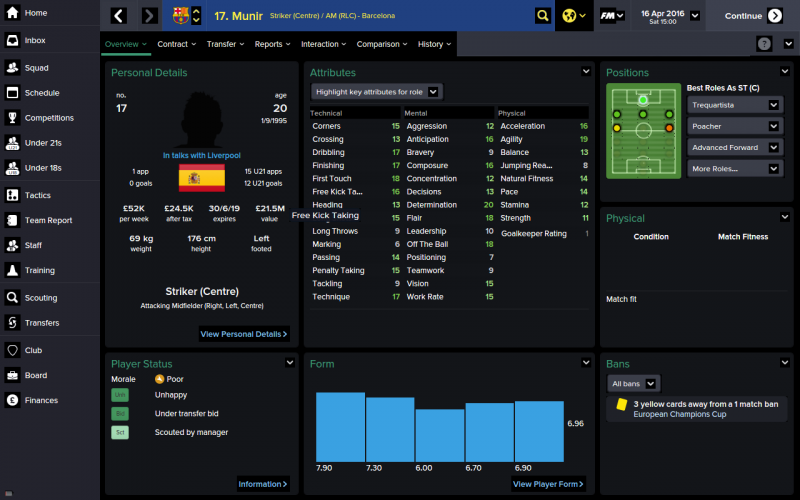 Another screen shot sent by one of our readers: 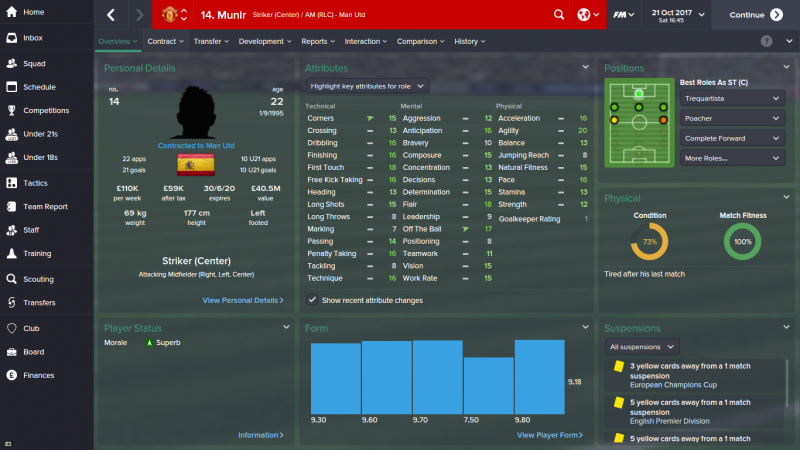 This chap requires massive wages to join your team over signing a new contract at Barca. His transfer fee won’t break the bank but his wage will soon.

Yes I can imagine, but maybe as the game goes on that changes.

Amazing attributes at the start for such a low price. But I suspect he demands huge wages. Will see.

Yes that has been mentioned above, but you get what you pay for I guess. If you want someone on £12K a week you’ll be lumped with an under par performer or a kid that needs developing before he’ll play at the same level.

such a great young gem, great from the start, bought him for my Swansea save, started on the bench as Bony ofc was my main, comes on as a super sub and scores like crazy, now at the end of 1st season he’s put Bony on the bench…

Find me another striker for 10m pounds who can become borderline elite in the premier division on those wages in that short period of time. I am actually considering selling Sturridge from Liverpool so Munir can get more appearances. But with 3 good strikers in Balotelli, Sturridge, and Munir, I can rotate them to keep them all fresh. Especially for those grueling stretches where you have a game every 3 days. And Munir hasn’t even hit his prime yet. The only thing even remotely negative about him is his long shots PPM but currently training him to forget it.

Yes it is quite surprising how he posses’ star quality at such a young age. As they say, you get what you pay for.

In June 2015 I had to pay a huge amount of money to get him in my team. But it was worth it. I planned to use him as a 3rd behind Rooney and Van Persie but it was so great when he came off the bench and started to score goals. I put him in the starting XI and score and score many goals around 45 goals in one season and he is only 21. So exciting.

That is a good question, some would say so.