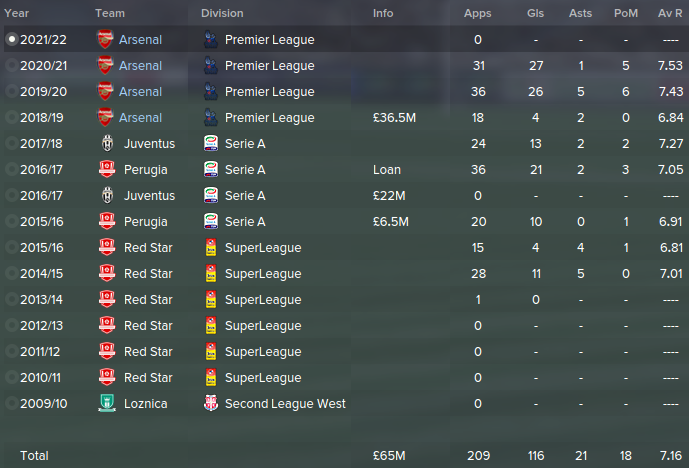 This FM 2015 player profile of Luka Jovic shows a very exciting forward capable of scoring a variety of goals and for just £1.86m. You will of course have to act fast for this price, at the very start Jovic can be approached to sign and Red Star receive compensation. However, I missed the boat with Newcastle and still coughed up £6 million as you can’t put  a price on his potential worth. One other side-note, you will have to wait until until January 2016 before he signs due to age restrictions.

Now to the player himself, Jovic has exceptionally well rounded ability. During my test save he could shoot from range, head, take on his man and wriggle free of the tightest marking. After scoring a good number of goals for Red Star, Jovic scored a goal every other for Perugia in Serie A, then almost two in every three the following season before hitting 13 in his first season with Juventus. Arsenal then reaped the rewards of their investment with a return of 57 goals from 85 games. Not to mention that International record of 23 from 50. Transfer fees accumulated totaled £65 million.

Theres no doubt in my mind, this kid is the must have striker in FM15. Take into consideration the price, ability and versatility Jovic should be up every mans street.

please do a goncalo guedes review, the kid was nominated the best in the previous youth champions league

We will see but so far he hasn’t improved enough in any of my saves.

This guy is amazing for me, bangs in goals at 18 for Arsenal for me so gooodddd

He certainly is, can score any type of goal.

Could you make profile of Predrag Rajkovic?

Can’t see him in any of my saves.

Yes he can get better for sure.

Yeah I had him arrive the January of my second season, sent him on loan had around 30 offers to take him and have him as key player paying all his wages, he went to wolves and scored 12 in 7 (so far at least)

– Any chance you could have a look at Julian Lelieveld for Vitesse?

I can’t find that player in my save, maybe have to have Holland loaded as playable which is outside of our scouting restrictions for this site I’m afraid.

could you check out Timo Werner?

He’s just way too expensive to profile IMO. Add to that he hasn’t improved enough in my saves I won’t be doing one for the time being, great player when hitting potential though.