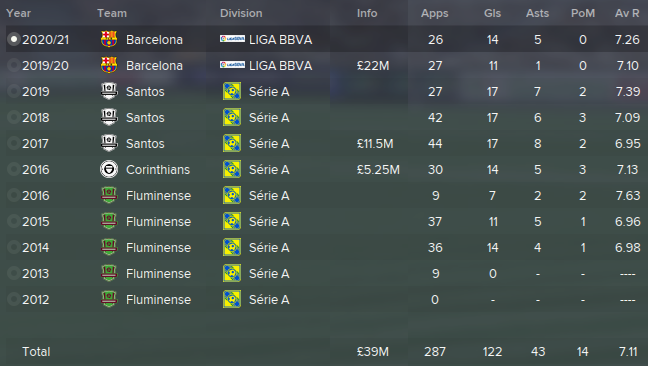 This FM 2015 player profile of Kenedy shows a well rounded, versatile forward capable of attracting attention from Barcelona. Kenedy has flexible potential and I don’t believe he was awarded that in my save, despite this Barcelona still coughed up 22 million and Kenedy scored goals where ever he went. One of the more rounded forwards Kenedy can do almost anything, while not excelling in any particular department.

I think the young Brazilian would do well as the second striker, sitting deeper and partnered with a goalscorer. He could be your false nine or trequartista. I do think the £15 million is a bit steep, until I see a screenshot of his full development of course.

Check out the screen shots below, sent by Tray Loco, showing Kenedy’s progress in his FM 2015 save:

Another set of screen shots, sent by MassesMan, showing Kenedy’s progress in his FM 2015 save:

Thanks for the screen shots.

i bought him for 5m start and 5m over 48 months by the way, not sure why it doesnt show