This FM 2015 player profile of Jeronimo Rulli shows one of the best goalkeepers in the game, solid at the age of 22 but also with huge potential. Unfortunately Real Sociedad have just bought him, so they won’t let him go at the start of the game. I reckon you can get him later on for around 10 to 15 million.

In my test save he moved to Napoli for 12 million and remained their number one until 2022. He also became the first-choice goalkeeper in the Argentinian national team.

The future profile shows amazing attributes in every column: physical, mental and technical. He is almost unbeatable in one-on-ones, his decision-making is top notch and also his anticipation plus rushing out can make him a solid sweeper keeper.

Check out the screen shots below, sent by Will, showing Rulli’s progress in his FM 15 save: 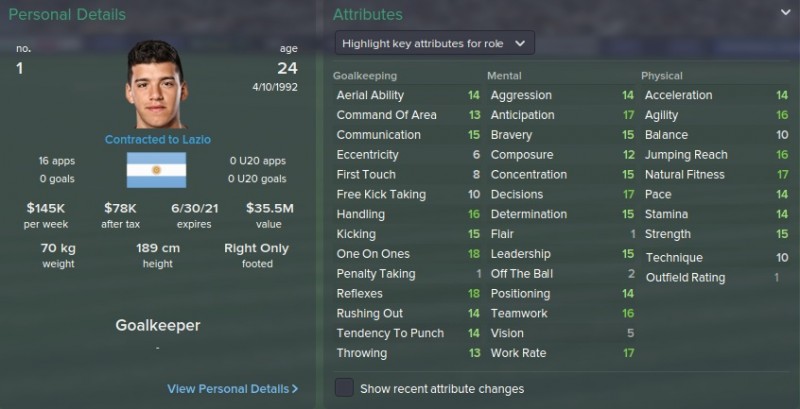 Rulli definitely one of the best goalkeeper in FM15.
I bought him from Real Sociedad for $40 Million (Around £24 Million) to Lazio because he and Real Sociedad did pretty well in my save. He is doing amazing for my club and many times he made amazing saves for my club. $40 Million is still considered cheap I think because he has potential to become world class goalkeepers, he is one of players that have “very consistent” consistency, and he can become great tutor for your youngster as he has “Model Professional” personality.

Btw, if I remember I already sent my pic of Rulli right? Did I need to send it again since I’m now at the beginning of season 2017-2018?

Also, can we have profile of Felipe Anderson, Danilo Cataldi, and Alessandro Murgia? Felipe Anderson not developed well in my save, but I think I can send Alessandro Murgia pic that shows his attribute after 3 years. I think Murgia is possible to get profile looking at his attribute.
Also, can we get more profile of players that natural playing at DR or DL (like Mattia De Sciglio, Silvan Widmer, and Sime Vrsajko). I feel the list still have few DR and DL wonderkids

Author
Johnny Karp
Reply to  Will

I have just added your screen shots to the post. I will check out all the players that you have mentioned.

Btw, let say if I submit a new pic of Rulli’s progress in my save. Which pic you will use? The old one or the new one?

Author
Johnny Karp
Reply to  Will

I’d replace the current ones with the new ones.

Definitely one the best sweeper-keeper around in the game. Definitely someone you should consider if you got the budget for him. Furthermore, he has a “Model Professional” mentality which would suits those who are particular in regard with player mentality type.