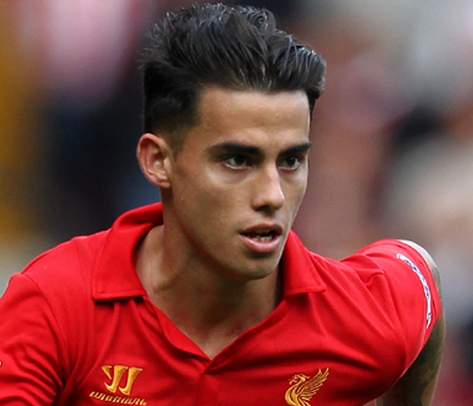 Club: Liverpool (on loan with Almeria)

This FM 2014 player profile of Suso shows a tricky chap with plenty of creativity, flair and the ability to take on his man. A real useful playmaker. The screenshots above were sent in by Bjork, who has seen Suso reach hefty heights in his save. Best used as AMC in multiple roles this kid is definitely a creator above all else. Developing 17 and above in creativity, flair, dribbling, technique and passing outlines the Spaniards key skills.

Another positive are his performances for Liverpool, since 2015 Suso has been instrumental at the heart of everything attacking. A little pricey at £19 million but if available for less he’d be worth a punt.

glad he looks so good, got him dirt cheap second season for my Barcelona (though I sent him on loan directly)

Yes he can develop nicely, will obviously vary with his flexible potential but still a good buy if cheap all the same.

Just bought him in my game, he’s 24 now though and not as good as that, rated 2 and a half stars by my scouts but they still say he has 4 and a half star potential which i was hugely sceptical about with him being 24, i decided i’d give him a chance anyway.
The above profile has given me some hope that he will improve for me.

The main thing to note is his flexible potential which means he may not have the same ability in your save, but if the scouts rate him like that then might be worth waiting another season to see how he develops.

good to see he develops..I’m currently managing LFC so I wondered if he can come any good. So far two loans in Prem and now 1st season in 1st team. Lot of hope in. Hope he can adapt to inside forward position.

Sounds like he’ll be on track to improve similar to these screenshots maybe, but just bare in mind he has flexible potential so keep an eye on him.

Hey guys, love Suso, he impressed me in the Spain squad.
I wanted to ask you about a player named Andrija Zivkovic. He is from Serbija starts in Partizan’s(club where Mitrovic,Markovic,Ljajic,Jovetic came from) U19s. Couple of seasons into my Roma save he already got snatched by Juve and loaned to Malaga.If you could do a profile on him that would be awesome

He’s not visible in my save I’m afraid.

Too bad. Seen screenshots on domestic forums where he turns out really good. Cheap too you can get him for like 500k. Anyways keep up the work…What you do here is very helpful