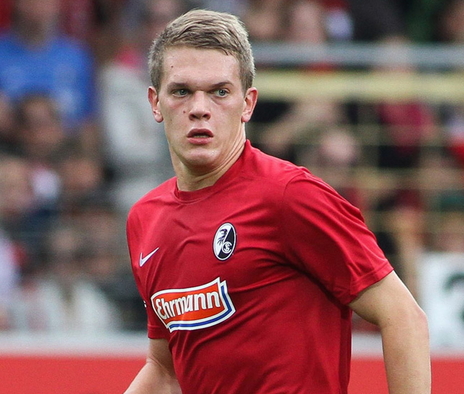 This FM 2014 player profile of Matthias Ginter shows a solid central defender that has surprisingly good technical attributes. Screenshots above are from Wayne Boon and show Ginter’s good development after less than 4 years. Not only has he gained very nice mental attributes, but his long shots and passing are surprisingly high too. This kid could clearly grow way beyond the screenshots above as his development is still in the middle phases.

If you need a ball playing defender that can be trusted to keep possession and not mislay a pass, Ginter’s your must buy. £26 million is too expensive, but this asking price will drop, I’d imagine after January. Unfortunately the rating below is a mix of the early screenshots and high asking price…an unfair reflection on this kids true talent and true ‘average’ price through the game.

Big fan of the site, appreciate all the work done. I have a even better screenshot than that from my Borussia Dortmund save in 2017. Ginter is a BEAST! Real Madrid, Barcelona, Chelsea want him but I will not let him go. Ginter keeps Balanta out of the team so that’s saying something

Also, I have a screenshot for Mitrovic. Just look at this complete MONSTER. Played him and Jackson Martinez upfront until this season and they were BEASTS

Thanks those are good screenshots. We’ll keep the Ginter one as it is and others can see yours in the comments, but if you can email me the Mitrovic ones I’ll upload them…the Tinypic images don’t come out so good. My email is darrensmith360[at]googlemail[dot]com

Wow, nice screenies! Got any other stars in your team?

Darren, I sent that email to you. Hope that you got it!

Jonathan Silva – http://i41.tinypic.com/2ptueet.jpg = got him for free from Shakhtar

My Borussia Dortmund team at the start of the 2017/8 season:

Only problem with this guy is that he is injury prone in my save.

Btw Darren can you please make a profile of PSG’s Marquinhos? This guy is beast..and among the 3 young players having the best PA ingame :P

We will at some point yes.

He’s at PSG though, so he’s not that interesting. Because you basically cannot buy him.

And that is why its not possible to please everyone. I personally wouldn’t do a profile for that reason, but when we have good future screenshots and people request it we need to do the profile at some point.