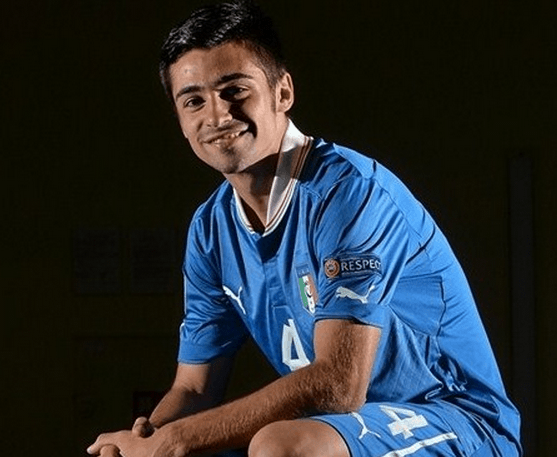 This FM 2014 player profile of Mario Pugliese shows a dirt cheap central midfielder with great physical attributes and incredible potential. During our test save the Italian wonderkid developed two fold, I seriously had to double take and make sure it was the same player. His technical attributes go through the roof, Pugliese can not only control the ball and make his own chances, but he can pick a pass better than most. I think the role of box to box midfielder would suit best, on top of those physical stats long shots and work rate seem to develop well which can be key.

It can be tough to develop wonderkids like this due to the struggle of offering quality first team Football without sacrificing results, but there seems to be  many, many gamers who have done this with relative ease. For £625K Pugliese is worth the risk.

How is Lorenzo Crisetig this year? Will he get a profile?

Not as good as last year or the year before unfortunately, not sure if he’ll get a profile this year but we’ll keep an eye on him.

Wow..he increased his stats off the charts!!
Has to be worth a punt!!
Good work guys!!

I certainly think so.

At last got a replacement for Xabi Alonso, will snap him and will tutor by alonso. Thnx man, was looking for a player like this for long time.

He has really great potential, its just finding him the right type of first team football when he’s young to fulfill that.

SPOILER Do you think that this profile shows him at the very best he can become? I’ve signed him but I’m really unconvinced, I think his PA may not be quite what it is there, and combined with me struggling to give him game time even in a lesser league I think I may have wasted a few million :( What’s more my decent assistant manager only says he has 4 star PA for relatively low club.

I think he can be better than the screenshots above. But he could also be worse, as is always the case with flexible ability…he is a slow grower, there’s no way you’ll know for a few seasons.

Okay, well it will be worth it for sure if he gets close to what’s shown in the profile.

625k you say? I offered that to Atalanta and got countered with an offer of 13 million. I dont understand why this seems to be happening. I also just bid for Cerri (supposed to be able to buy for 800k) and they countered me with an offer for 27 million. What the fuck is going on here.

Same as Cerri I believe, At the start of the game he’s available to sign for free with the amount we show due in compensation.

He is an avid Man Utd fan and Roy Keane is his idol, reason enough for me to sign him for Utd and have a punt :)

He’s certainly worth a punt at the asking price.

Hey Darren. Do you have any plans on doing a report on Leon Goretzka? He looks very, very good this year.

He’s already been profiled, should listed in the wonderlids list.

Nice profile Darren. A real bargain and a rare talent. I have managed Pugliese at Atalanta from the start of the game, and I therefor would like to point out that he is not necessarily a slow grower. With human management, some good coaches and a bit of first team football from the start he can develop very fast indeed. I am half way through 2nd season and he is already a established regular at our team fighting for a top 3 spot in the Serie A. I am hoping and thinking he will very soon be at the level of this future screenshot, eventually surpassing it :)

Thanks Bjork, when I said slow grower I didn’t mean that he takes an age to increase his attributes, I just meant it will take him longer than some others to reach a certain level due to the fact he starts with such a low CA, he has a lot more ground to cover. But good to know he covers it fast, I’m sure that will ease some readers concerns.

Can you tell me how Bryan Cristante of Milan develops? Want to know if he’s worth the punt for squad renovation. Maybe he’ll be worth a profile :P

He can develop reasonably well but not become good enough for a profile TBH.

1) Can he still be a good, reliable rotation option? With Financial-Fair Play, I need to be careful where I spend the money…not that Berlusconi gives me what he used to in previous games.

2) Will you guys make a guide about ho Financial-Fair Play works?

Based on the test save no, because it took until 2022 for him to get to rotational level, but who knows with human management.

I doubt we’ll do a guide on the financial fair play, there is no proper outlines from SI to share, so it would be a guide on experience and how we see it working, which everyone can see for themselves. I don’t think its difficult, just don’t over spend and keep track of the projected finances.

Every player is assigned a current ability rating and potential ability rating at the start of the game. this is a lump sum that equates to their spread of attributes. If someone has low CA but high PA it generally means there is a big gap between their current ability and their potential ability, so it will take them longer to reach a high standard than someone with better CA who doesn’t have such ground to cover. Hope that makes sense.

Hi Darren, you might want to see and consider Luca Crecco, 17yo Italian MC/L from Lazio U20 as one of your great list of fm 2014 wonderkids. He’s developing very well in game under human management (I managed Lazio), already having decent technical skills, GREAT mental and physical attributes needed as box to box midfielder in the end of my first year. He also grows at around similar pace as the phenomenal Carlos Fierro (whom I bought), despite having less games than him :)

When I get my laptop back I’ll be sure to check him out.

This guys stats are crazy in my Forrest save. Age 19 (March 2016) and his stats are nearly as good if not better than then screen above from when he was 24. I can’t wait to see how good he gets in a few more seasons, he is already my best B2B midfielder

He certainly can develop beyond the screenshots above, takes some man management but with game time and a bit of luck on the PA it does happen.

Great player for my united save imo however can be quite inconsistent when it comes to form. Always shines as BBM in the big games but doesn’t perform as consistent as the likes carrick or kondogbia. scores a handful too

I haven’t actually used him yet in game but development wise looks very promising.

Im in the 18-19 season with my everton squad, bought him beginning of 1st, and this season he has stepped up competing with lucas romero for first team. He looks way more amazing on mine than here.

My tomas martinez/Alvarez Balanta/Ocampos are ace aswell.
Martinez overtook barkley, and balanta has been playing 50 or so games a season and has been impecable. Lucas Ocampos is a future ballon d’or for sure, he looks very cristiano ronaldo like.
http://tinypic.com/r/10paydj/5

Thats some very good development indeed, must have almost had his flexible PA maxed out.

if u want I can give u images of Balanta/Ocampos as ive personally developed them and given them ALOT of first team football.

You could send over the Ocampos ones as they may be useful, my emails darrensmith360[at]googlemail[dot]com Thanks.

He is sensational in my save. Unfortunately, I am not able to afford him.

Please ignore the above comments, those were meant for Eric Lamela profile. :P