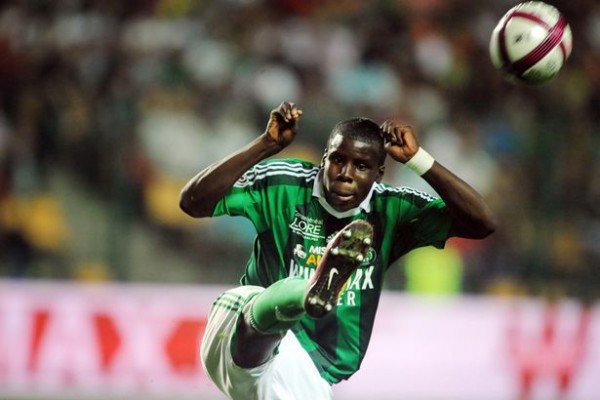 This FM 2014 player profile of Kurt Zouma shows a rock-solid central defender, just 18 years old but already good enough to play in most top flight teams. Unfortunately you can’t get him right away as his transfer to Chelsea makes that virtually impossible. I was able to negotiate a fee with the Blues, 60 million, but the player won’t want to move at the start of the game anyway.

In my test save PSG played the waiting game and managed to snap him up for just above 5 million during the last year of his contract but that was before the patch. He’s well worth the investment though, whether you buy him right away or not, his physical attributes are excellent for a central defender. He also developed superb mental attributes plus solid technical attributes on the defending side. I have a feeling he can develop even better than shown in the screen shot above.

I managed to develop him a lot better than that…heres a ss: http://i.imgur.com/A0ZyaZy.png

Kurt Zouma’s a brilliant player. In previous years I’ve been quoted around £30-40million for him which I thought was too much. But this year I got him in January 2014 for around £13million and he’s a bargain for that price. Pacey, strong, great tackling, headling and positioning- not much more you could want from a defender.

Not quite as good as Balanta but still a brilliant acquisition- put the two of them together and you’ve got the basis of a great defensive unit.

again, an other player you guys post not at the players fully potencial. dont understand whats the point. you once asked me whats the point of doing profiles without good future screenshots. and this is absolutly not a good future screenshot of zouma. the same goes for sané, eric dier, lucas romero and a few more…. i really like ur work guys but, its just not the same. in the other versions of the game u guys were a lot better. also this year it seems that u guys have a sponser from italy or something, cause 50% of ur posts are italian players, there are so many good young players this year, from all around the world. ot just from italy or england. one thing i have to aplause u is for the tatics part, just excelent. well it is just my opinion, hope i didnt ofend nobody

I agree that Zouma’s future screen shot does not show his full potential but it still shows a great player, that’s the point. About having 50% Italian players, that’s pretty much ridiculous, you can do the counting and you will find out that the numbers are quite a bit different. We try to do the best we can, sorry it’s not good enough for you.

@Valentim77, there is a big difference between showing a great player not at his full ability but still looking capable of making it at any level and bossing the game, to then showing a good player not at his full ability and not even able to make it in most top EPL clubs…its a fine line we try to manage and there will never be a right answer in everyones eyes. We have tonnes of top talent we are desperate to profile as they would be great signings but the fact is that in our saves their profiles just aren’t good enough. This one of Zouma while not as his full ability is still good enough to warrant doing the profile.

You’ll note that the time you are referring too where I said whats the point in profiling if the profile isn’t good enough was with regards to Bruma, at the time we had very poor future screenshots in which his career had seriously stalled, however as soon as we found good enough screenshots we published the profile. Even if we hadn’t found the great screenshots we did, he would still have had a profile at some point due to his quality, we just wanted to wait longer to find something a bit better. So that was a poor example as we actually kept your request in mind and actively looked for a suitable screenshot and then published it…not many sites would make the effort to do that. The same goes for Fernandes who you mentioned once, Halilovic in which you used as an example in the same comment as the Bruma one, all now profiled that we feel we have good enough screenshots.

Out of interest I just counted the players we have profiled that play in Italy and its actually 25 out of 129, thats around 19% of our profiles being Italian based players, not quite 50 is it.

In all honesty it seems you have had it in for us from day one of FM14. Constant moaning about players not been profiled and arguing you don’t understand how we can’t have good enough screenshots to profile them. Then complaining that Bruno’s PA was listed wrong because he must be better than Gomez and we showed Gomez’s PA as better, all of which was 100% accurate on our side. We have tried to tend to your complaints and gripes as best we can for a while now, but you are being unreasonable and most of the time seem to use inaccurate and unfair facts in my eyes so maybe we’ll never be able to please you.

We have a lot of people to try and please and we will always welcome constructive criticism, but you clearly don’t get the ethos and theme of the site, once you have made your point its usually time to let it lye, I suggest that time is now, we get it, you don’t like what we are doing this year, not everyone will but there’s no point in constantly badgering on about it once the point has been made and addressed as we can’t just please one person we have to think about the majority.

I like ur answer darren, and i respect what u said.

i have to say that i’ve only discovered so many wonderkids thanks to u guys, specialy in fm13.
so,
i really think u misunderstood me.

if u were just a daily visitor like me, u would be very excited every single day waiting for next wonderkid profile to come next day. and sometimes (which is normal) u will get disapointed because the player on that day was not what u expected to be. and some days u will be very happy because the the player profile its just what u were expecting or even better.

I liked ur answer like i said, specialy the way u defend ur work.
but, i didnt like the way u “pushed” me way. there are some parts in there that would be better if u just say “get the fuck out”.
Criticism is the practice of judging the merits and faults of something or someone, and i just gave my opinion. which u should be ready for it since u have a site about FM.

i liked ur defend skills but i really didnt apriciate ur words.
so, thats why i made the choice of not coming anymore to ur site. i am sorry if i ofend some one, will always be a fan of urs, even with my criticism :) take care

@Valentim77 If that is how you want to take the comment, reading between the lines and making assumptions over what could be meant then that is your choice. As I said we will always welcome constructive criticism, but when you harp on about the same thing over and over again it no longer becomes constructive. A lot of your negative comments include bent facts and guess’, which will always provoke a defensive reply.

I would never push anyone away, if I wanted to do that I would just ban them from the site. I just don’t think you realize how your comments are coming across and was trying to explain to you that at times you are being a little unreasonable and your comments can be a bit rash.

Again, if you feel like I am trying to push you away then you are mistaken, I am however telling you that we understand what you are saying, we take onboard your criticism but you need to stop going on about it now, covering the same subject more than once isn’t going to help anyone. You keep saying you hope you haven’t offended anyone, well that must mean you assume you might have and if you say you hope you haven’t then why place the comment in the first place.

We are happy to discuss and talk to the readers about concerns and what they want, no problem at all but some of the things you said are not OK, the comment was rude and suggesting some rather unfair points. I am not saying that was your intention, but your intention is irrelevant when you write up a comment like that. I think we should put this to bed now. Again, I am not pushing you away, I would not want someone to feel alienated here, you express your opinion a lot, I felt it was time for me to express mine. I have no problem with you at all and welcome you around FMS, but when we receive a few too many comments which seem unreasonable then we like to make the readers aware of how they’re coming across.

If you had just said something like, ‘I don’t think those screenshots show Zouma at a level that warrants a profile.’ or something to that effect we would have discussed it with you as normal. But to start saying ‘again, an other player you guys post not at the players fully potencial. dont understand whats the point…’ and claiming we must be making money from Italy on the side due to your opinion on the number of Italian based players we profile, those sorts of comments are bound to annoy people, its not just what you are saying its how you are putting it across I think. Anyway, for me this is now closed, you have expressed your thoughts and us ours so maybe we should just move onwards and upwards.

Wow Darren that’s got to be the most concise and well put together way to tell someone to piss off and shut the f*** up xD
Quite rightly too as the work you guys put on is just awesome and again i can’t thank you enough for making me discover some of the wonderkids in this game.
As for Zouma he is a weird beast to develop. Quite hard to get a hold off from St Etienne but when he’s on his game he has to be one of the best defenders around and like RedVendetta said him and Balanta at the back has to be one of the tastiest prospects in the game.

Another terrific young defender. Spoilt for choice as I try to assemble a solid CB pair. There are so many world class CBs who are in their early 20s/teens – Doria, Balanta, Marquinhos,Umtiti, Milosevic, Zouma among many others. A good situation to be in….:)