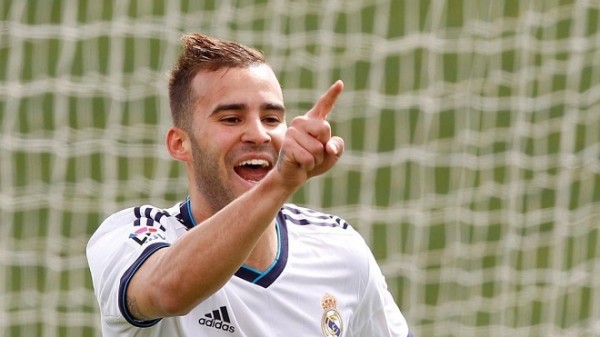 This FM 2014 player profile of Jese shows one of Real Madrid’s brightest talents, a young striker that is already good enough to play for most top clubs in Europe at the age of 20. His misfortune is that he grew up in a team of superstars, so there isn’t much room for him alongside the likes of Ronaldo or Benzema. Real Madrid are not willing to let him go easily though, they want 30 million for him at the start of the game.

In my test save Real Madrid made a pretty strange move, sold him to Chelsea for 28 million and then bought him back for 21.5 million. His future profile shows a player with solid physical attributes but he lacks a bit on the mental side. His technique is very good though and he became a good finisher as well. You might want to wait for the price to drop though, even though that might never happen.

I like this guy a lot. He’s a real quality striker. Bought him with Wolfsburg and within 3 seasons of regular football he’s scoring over 25 goals a season no problem. Seriously recommend him and also traiining his concentration seemed to work weirdly well

Yep, he is quality and well worth paying 7 million at the start of the game.

Has been hit and miss for me.signed for 13 million 2 years in (signed in January) scored 13 in 9 then scored 9 in 42 however he was playing mostly on the wing or as a attacking midfielder so he grabbed more assists (17) however he is currently on loan to cska after having a terrible season 2 goals in 41 appearances and 3 assists plus he seems to have a difficult personality in game as he is often unhappy with his training schedule which in turn slowed down his development although overall he is versatile playing well in 3 positions and able to perform 2 duties within these positions giving you 6 ways to play him and when he does play well is almost he is almost unplayable especially when given the instruction to roam,run with the ball and be expressive due to his high dribbling,pace and creative stats which almost make up for his diva personality and inconsistency

He’s amazing in my Liverpool save. Links well with Suarez up front and has a great record.