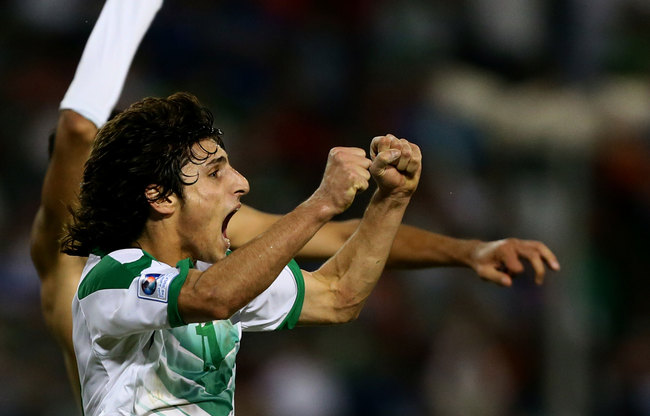 This FM 2014 player profile of Humam Tariq shows an excellent bargain, a top talent that is available for just 550K at the start of the game. The bad news is he might not get a work permit for the United Kingdom and you won’t be able to wait for him to get one as there are several European clubs ready to make a bid for him at the start of the game.

He was snapped up by Juventus in my test save, spent a couple of seasons on loan before being bought by Norwich for almost 12 million pounds. Juve made good profit on him but I feel that Norwich got a good deal as well considering that the lad bagged 10 goals in the last season. He developed very well, especially on the technical side, but he also has good speed and agility plus excellent mental attributes. I think he is the first ever Iraqi player to be featured on our Scouting Network, definitely worth buying.

If we’re talking about Iraqi players, you should check Ali Adnan, he plays for Caykur Rizespor. Star of U-20 World Cup in 2013. Cheers.

Adnan’s potential is vastly inferior to Tariq’s (talking about FM 2014, I haven’t seen them play in real life).

Man, he can be Iraqi Messi. It’s a shame they won’t let him work permit as i m managing man utd.

A shame indeed, he will surely be snapped up by another club by the time he qualifies for a work permit. You can try to sign him though, might get the work permit upon appeal if you are lucky.

The wages on the print screen just ridiculous. o.O

For a footballer, yes. But a few billion people would be more than happy with 22,000 pounds per year.

Could you please review Callam Jones from WBA looks decent..

Looks quality. I will definitely check him out.

Could certainly be better under human management(as with most). Great find

Can you tell me what nations I would have to tick to find him? I’ve been looking for him but I can’t find him anywhere :(

The setup that we use is as follows: large database loaded, including England, France, Italy, Spain, Argentina and Brazil loaded as playable. You probably won’t have to load those nations though, the large database should do the trick.

No luck :( any other options?

Haha, I meant any other ways to find him. Right now, I’ve ticked in all those nations, with a large database & selected the Iraqi league (through advanced) but still isn’t there; any other things I should try out before giving up on Tariq?

I’ve got the original database; that’s probably why I can’t find him. I’ll update and let you know shortly

You really need to work to make your reviews more universally applicable. A large percentage of your visitors play games based on early databases- pre the 14.3 databases and its accompanying changes. At a minimum you should include information in your reviews when a player such as Tariq is a player who has only just been added in the 14.3 update and therefore will never be found if you started your game with a database in November ’13. This basic action could easily be added to your current reviews and would save many of your current visitors hours of easily avoidable frustration and wasted time if you simply took the time to include information in the review indicating Tariq’s recent database addition.
Further your spoilers could include the PAs (and CAs) of player for both Pre and Post 14.3 databases. A large number of your recent reviews have been of players that have had significant PA upgrades in the 14.3 database changes- Edwardo, Tielemans, Aaron Leya Iseka are just a few of the players that had their PAs recently upgraded in thechanges. That is fine, but as written your reviews are largely irrelevant to any FM14 player who did not begin their game with database 14.3 (and for those asking- No,you can not upgrade an existing game to utilize the new 14.3 database or any other upgraded databases we may see in the future. Whatever database you load your game with that is the database you will have for the entirety of your game- though leagues can be added and there are of course regens.)

I am hopeful that this site will make a commitment to all its users, to guarantee from now on that all future reviews will be composed in the most universal manner possible, to provide valuable information for every visitor, regardless of database or otherwise. I have only suggested a couple of quick fixes but I hope that you will undertake a thorough review of your Footballer reviews to guarantee they benefit as many FM 14 players as possible
I hope that you are committed to such a policy. If you refuse to commit to ensuring all reviews are as universal as possible, unfortunately you will soon find a deep fragmentation in your numbers of monthly unique visitors.
Please do everything to make your reviews and other content universally applicable. Unfortunately this is a standard you have been falling deeply short of since the introduction of the 14.3 database upgrade. I hope it does not continue.

It’s quite funny to get criticism over this after both myself and Darren have worked very hard to update all the profiles shortly after the 14.3 patch was released. I don’t know how you know that “a large percentage” of our visitors play on early databases, if you have information I’d love to see an exact percentage. Based on comments we received though I think that many of our visitors are playing on the new database, in fact many asked us to update the profiles quicker than we were able to.

I also have to say that you don’t need to search for a player for hours, you ask us here. As you know, we always try to provide answers as quick as possible.

After updating all the profiles I can tell you that most of them were left unchanged because there were no modifications of CA/PA in the new database, only a few players received boosts or penalties. That said, I think most of our profiles are as universal as they can be, with only a few exceptions that you have already mentioned.

As for Tariq, I didn’t know for sure that he was only added in the new database, that is why I haven’t included that information in the post.

If you are playing on the old database, how many seasons into the game are you? Because if you are in 2020 already that makes almost all our profiles irrelevant to you, doesn’t it? The best use for our profiles is at the start of the game, that was our intention since we started this project.

Anyway, I do take your complaint seriously and we’ll think about including the information you mentioned in the future.

I just have to point out that what Viking is referring too and insinuating as a large issue isn’t really in my eyes as bad as made out. The amount of database changes made to profiles that were already done was minimal and still leaves the profiles very relevant, and only a few of the new profile (names mentioned) were effected by PA. The only issue there could be is in the asking prices as they vary quite a bit, however, seen as they are for the start of a game and anyone starting a new game would use the new patch that is irrelevant.

There are very few profiles in which it would lead the reader to actually evaluate the player differently going off our profile (only names Viking mentioned.) I seriously don’t see it as the size of issue that has been made out. Of course it is something we will consider for the future, we always want to improve even if it comes down to the minute details. But its not realistic to say readers are spending hours searching for players in previous patches that aren’t there, there are only a minute few of them, and once you’ve searched for the name, you know he isn’t there, thats common sense which should be apparent within minutes of loading your save and as Johnny pointed out we very quickly address comments and queries if something needs clarifying.

Also, I personally see it as rude to use phrases such as ‘you really need to’, and also questioning our commitment and policies etc, most people would just appreciate the level of work we do and be happy that someone is prepared to go into such detail across such a large base of players, no one else is. To clarify, we always take suggestions and constructive criticism seriously, but it would be nice if readers would address us with a little more respect for the work we actually do rather than just discarding it as not good enough. Of course, you are right in the very few players you actually pointed out, but those few profiles out of more than 180 does not warrant questioning our commitment, the very fact we did more than 180 profiles and continue to make them daily says enough…people don’t like to be spoken down to Viking. I’m sure these comments and your valid point would be much better received if you didn’t speak down to us…but as mentioned it will be taken on board regardless of tone and manners.

i like to start with the original database, does no one else feel it unrealistic, the update is fine but then if it includes transfers in january, surely they should start the season in jan with all the current totals etc??? at least make the transfers happen in that transfer window! am i alone in thinking this?

I don’t think it’s unrealistic, I like to start with the updated squads but I guess it’s a matter of personal preference.

Nice find. Will definitely check him out in my save. Have you checked out this guy on your save(s)? Simeon Slavchev– plays for Litex in Bulgaria Is he any good? Also, do you think you could somehow highlight players that you’ve recently added so it’s easy to spot which ones were added recently as it gets hard to spot new players when you have so many finds! :) Thanks.

This guy got snapped up by Man City from Roma at a price of 27.5M in my save, won World Player of the Year and is now worth 40M at 26 y/o. He’s the second best player in the world behind Neymar right now, and will be the best in 2 years if my youth player (with 5 star potential) doesn’t work out.

tip for getting him at the beginning of the game in england: start in june. after first day ask for a feeder club for work permit and hope you actually find one. after you get the feeder team just sign him. hes not always signed too quickly that you cannot do this. ive done it on arsenal many times.

That’s a good plan, thanks for sharing.

Got some screens from my game where he turns out even better if you want them.