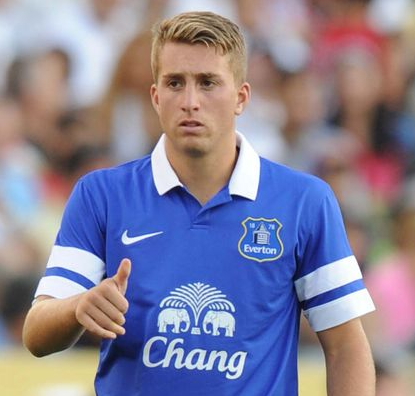 Club: Barcelona (on loan with Everton)

This FM 2014 player profile of Gerard Deulofeu show a tricky winger with world class potential. Yet more screenshots from Wayne show Deulofeu performing extremely well with Bolton and developing his attributes along the way. This kid can come on leaps and bounds from the screenshots above, he’s only 22 there but already has 18 in dribbling and technique not to mention 19 for flair. All those creative skills mean he can cause havoc down the wings.

Another bonus is Gerard’s versatility, he can play as a winger from AMR or an inside forward from AML, almost to the same level. Yes the asking price is too much, but it should drop over time. Ultimately its the price that drops the rating, though I’m sure that would rise if we had images from this save a few years on.

Only 14 pace?!?! Do SI watch football? They gave Ronaldo 19 last year and I don’t think he’s much faster than Deulofeu!

I guess the main question is are you considering pace and acceleration, is he fast over long distances or in spurts? If its ling distance then you may have a point, I haven’t seen enough of him to comment on that though.

They cut his valuation by 15 million?

By the way I assume that this profile – given that Deulofeu ended up at Bolton – came from Wayne Boon’s (sorry if I mispelled it) save game? If so, and if it’s not too much to ask: What’s the trophy haul?…I mean, he’s got real class in his team.

This did come from Wayne so we’d have to wait for his reply to your questions. As for the first part, not sure I understand, what did they cut by 15 million? I haven’t seen his value cut, do you mean from one patch to another?

I understand, why is that strange though? It happens all the time, numerous seasons have passed and he obviously fell out of favour at Barcelona, or was never in favour. Whereas they saw his talent at the games very beginning.

These images aren’t visible when you click the link.

are these links ok? (if not, pls delete these posts because they are usefull.. and sry for the spam)

They are fine, the keeper is a regen so can’t be profiled but we can look at Romero.

We’ll look at doing a profile of Lucas Romero.

The prices do fall over time as the game progresses and it depends if the club uses then in their first team. Honestly i was quite shocked when i saw rafinha listed for 775k (following a 4mth injury spell), but as for deulofeu i was in the market for a right winger and you’d be surprised at how many clubs accept low bids for their players. Denys Garmash and Gabriel Torje are good examples if u wanna try it out.

This is also with a whole year of no first team football. Could be even better than shown here.

I agree, he certainly could.

Brandt and Gerard D as cover for Neymar and Sanchez in my second Barca season…can’t wait to clobber Real.

Darre the best player to slot in as the RIF on your 4-3-3 control tactic. I thought he’d be Sanchez’S backup, instead Gerard’s stolen his place in the starting XI.

He does have flexible PA but when he is in the higher reaches of that he’s truly brilliant.