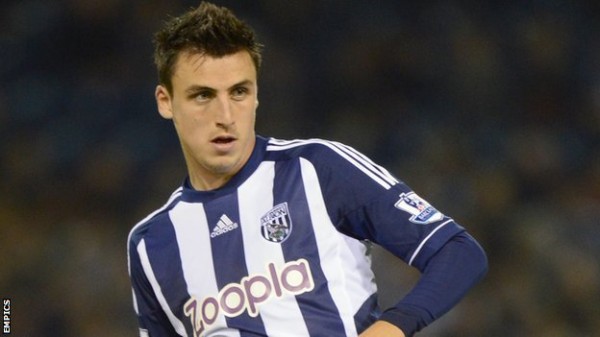 This FM 2014 player profile of George Thorne shows a very talented young English midfielder, one that can become a top class regista or playmaker in Football Manager 2014. West Brom are willing to let him go for 10 million at the start of the game and I think that is a pretty good price considering his potential.

In my test save he developed nicely and his good performances for WBA brought him a transfer to Manchester United. He really showed his worth at Old Trafford, providing quite a few assists and some goals as well. Thorne even managed to become a regular in the England national team.

His mental attributes developed very well while his numbers on the physical side are also pretty good. Also with 17 for passing he should do a world of good in midfield, adding solid technique and decent tackling as well. Last but not least he is “natural” both as DM and MC.

Could you upload the profile of Lorenzo Crisetig, the Italian DM. He’s a beast in the previous versions. Thanks.

He will most likely be profiled at some point.

This guy is taller , i can see a lot of mistakes from SI when i am looking at players height

You are right, they seem to have reversed the height / weight ratio. Seems he’s 1.88m and 83 kilos.

I did not noticed that is reversed. You are right, maybe is just a bug

I had him on my AS Monaco save, him along with Moutinho and Ward Prowse won me the league.
He is not flamboyant but does his job effectively. His marking is left something to be desired but his positional sense covers up his flaws and helps break up plays. Definitely worth a try, I am sure he won’t disappoint.