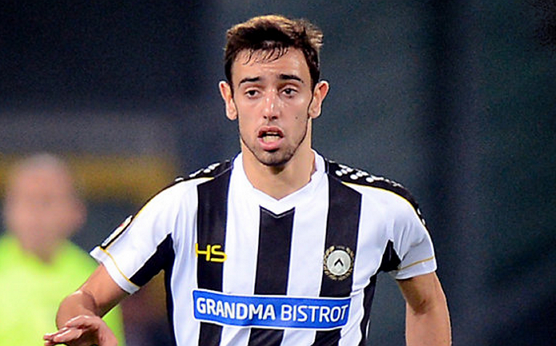 This FM 2014 player profile of Bruno Fernandes shows one of the best playmakers in FM14, with well rounded attributes he can also play most attacking orientated MC roles. Thanks to Pedro Fontan for the screenshots in which Fernandes has enjoyed a glorious career with Man Utd. Scoring plenty of goals, setting them up and also getting some nice average ratings make this kid look very tempting.

Fernandes is such an all rounder its hard to select highlights in his attributes, but long shots, passing, creativity and flair seem to be the base for his goals and assists. They would be nothing without his brilliant mentals though and some good physicals just add the cherry.

In a couple of my saves,he turns out to be the best Portuguese player

He does look like a really class act, certainly a must buy if available for less than the start asking price.

His asking price does drop at the start of the second season in some saves (in 3 of 6 saves i’ve had him in) (june -july transfer period). However i’ve had Udinese asking prices as varied as 3 million (in july 2014) to 40 million (in August 2014 in another save). So it is very hard to gauge how much they’ll ask but if you have the luck to get him fairly cheaply he’s definitely worth it looking at his stats. And he can develop even more under human management. But his price can be a definite put off.

Thanks for the screenshots Pedro, he is definitely one for the shortlist to try and grab at the right price.

I have to say, that i have stanciu ozil ( and believe me my stanciu turned a beast) but still this guy just do everything ritgh, he never plays bad and with the ritgh tutoring he just turn into a beast, one of the best players that i had/have in my team.

Can’t Believe i manager Udinese in my save and first season I sent him out on loan and at the end of the season sold him for 130k, I don’t even remember him, when i saw this profile I had to check back in my transfer history…what a waste on my part, I wasn’t even overly blessed with centre mids at the time!

That is a nightmare, did same thing last year with Newcastle selling Campbell for nothing.

Aw no, disaster, I blame the coaches…good managers like us wouldn’t make mistakes ;)

just got him from FCP for 9mil to my LFC save in Jan of 2018..hope he’ll do as box to box mid…I’m looking for the right one for a while

This guy looks like a beast in the future. But I am managing Watford and in january 2014 I can get him for 0k, because of the connection beetwen Watford and Udinese!

That connection will prove very valuable then.