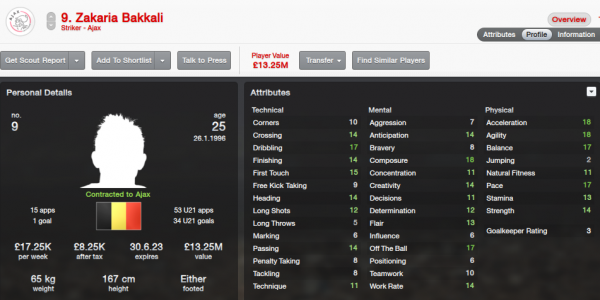 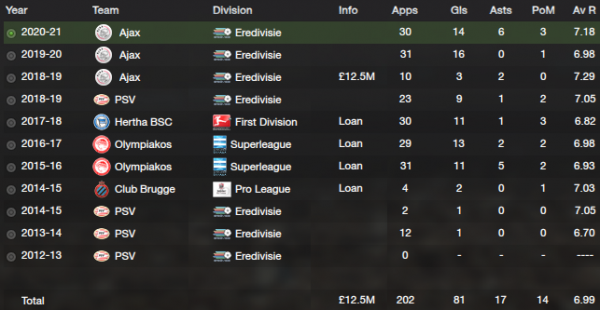 This FM 2013 player profile of Zakaria Bakkali shows one of the most exciting youngsters in the game. At the tender age of 16 he looks a very promising front man who can develop into a top striker. In my future save he was loaned out a lot during his time at PSV, but scored a nice amount of goals in Greece, Germany, and for a short time in Belgium. He was then sold to rivals Ajax, and during his two and a half years there scored almost a goal a game. He also played a staggering 53 games for the Belgium under 21 team, scoring 34. He hasn’t done brilliantly for the full national team but that doesn’t reflect his ability.

He has the perfect attributes for a top poacher, his dribbling, pace and acceleration, agility, off the ball, composure are all great. He could do with better finishing but it doesn’t look to be much of a problem and as ever can be improved with human management. For just £600k compensation you can not go wrong with this guy, the only reason he is not a 10 is because of his flexible PA, which is -9, so it’s not too bad but he may not become as good as this future profile in your game.

I didn’t even realise that, i think he has flexible CA also, so in the save where I got my future screenshot from his composure may have been higher at the start of the game.

Another Belgium player! Going to be better than Spain at this rate!

Yeah, the Belgians are taking over!

Bakkali’s compatriot, Andreas Pereira must be worth a profile.