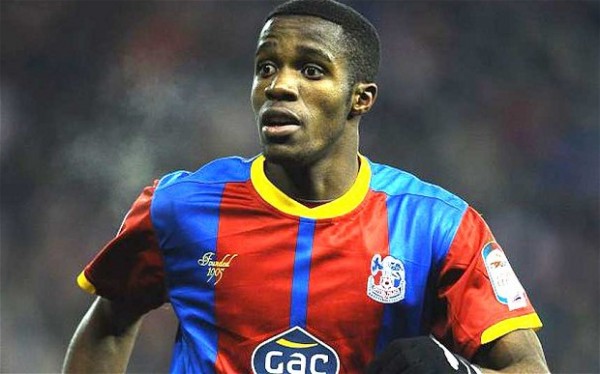 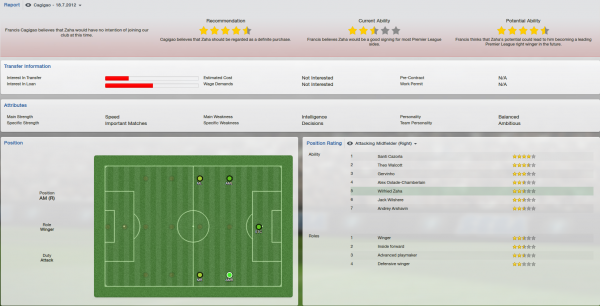 This FM 2013 player profile of Wilfried Zaha shows a famous English wonderkid and his development in FM 13 until 2019. You all know about him, he was called up to the England senior squad, he was bought by Manchester United, so I was as curious as you to see how he might develop in the game.

My test save shows he has made some progress, even though I guess he could have become even better. However, he has developed into a solid winger by 2019, amazing speed, good flair and excellent technique and dribbling. He didn’t get too much game time though, he virtually wasted three seasons, from 2014 to 2017. Tottenham bought him for 14.75 million and finally got something out of him in the 2018-2019 season when he bagged 12 goals in 35 appearances.

All and all a solid signing I guess and one that could develop beyond what you can see in this profile but I wouldn’t pay the initial asking price, which is 17.5 million at the start of the game.

since he can do the role of a striker heven being a winger do you think that a traning of a complete foward and then the training of would do wounders to zaha ? because his tecnicals are not that great and the spots that the complete foward covers are the ones that zaha lacks the most

I wouldn’t make him a complete forward, he’s a winger by definition. But he could do well as a striker if you play on counter attacks given his speed.

not saying to put him as a foward, but training him with that option but still use him as a winger, and then when he gets good attributes se the train of winger.

True, but I believe he could become a bit better with good management.

Nah, could be worse.

Shockingly poor for someone so hyped up in real life

Agreed, but he’s not that poor. It’s just the hype that is too big.

I think we’ll have to wait until FM2014 to see his true potential.

He is nowhere near terrible! He can do what a winger needs to, run with the ball and then get close enough to finish! :D

the lack of assists concerns me a bit. 12 goals in 2019 is good but it’s taken too long for that to happen. not good enough for top 4 in england and wasted by united and spurs management.

one thing for sure the kid missed a lot of game time. and of course with 26 years he doesnt have nothing to improve. But i do belive that this kid could make a diffrence with human management but with his attributes being so uglyn seems hard to try and put money on him

In my second season at United I sold Valencia and gave Zaha no7. Until april he’s got 12 goals and 14 assists with 7,41 AR (better than lamela, young and nani). His attributes aren’t much better than at the beginning but he is some player. He runs past defenders like they were non-existent and scores some sensational long range drives. He scores after solo runs from his own half or volleys 20 yarder. Real game changer. Surely a hit for me in his first season.

his attribute not looking good but he can perform. In my 17/18, play him as wing at RM/LM role ,he make 12 appearance with 6 goal & 6 assist. Speed and flair is his biggest asset.

Hi. Do you have a profile of Martin Kelly of Liverpool? I am thinking of buying him as a backup Right Back/Center Back for my team right behind Nathaniel Clyne and Steven Taylor.

No, we don’t have a profile of Kelly but he is a pretty good player from what I can see in the game.