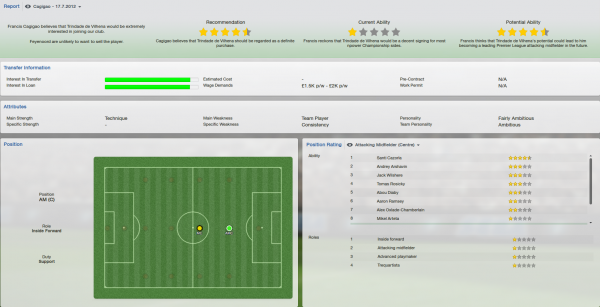 This FM 2013 player profile of Tony Vilhena shows a very talented Dutch wonderkid, a player that becomes one of the best attacking midfielders in the future. I admit I didn’t know anything about this lad before finding him in FM 13 and it was quite a nice surprise. His potential is very good at the age of 17 and even though he won’t slot into a top flight right away I still think he’s a steal at 5.5 million.

In my test save he developed very well and moved to Schalke for a staggering 18.75 million fee. He is a pure attacking midfielder and one that could score a lot of goals if employed in the right tactic. He develops great technique, exquisite passing and dribbling, top notch physical attributes and also a brilliant work rate. So I reckon he’s a good buy either for developing for your own team or for selling for a tidy profit in a few years.

finding it difficult to view the screenshots, could you repost them please

Sorry about that, I replaced them. Not sure what went wrong the first time but you should be able to see them properly now.

He and Adryan Developed very similar for me, think I will have better screen shots of him in a season or two

do you think he can be trained to be a striker ?

His attributes seem suitable but it’s a gamble. Secondly, he will never be as good as a striker as he is as an AMC.

this kid could be a lot beast with the proper management. Sure he looks amazing, and he didn´t had quiet the opportunities in feyernoord, and that is amazing because the way he developed with out game time. and of course when he joined schalke he probably grown a bit.

johnny, thanks for doing the screenshots,
quick question about trequartista’s, I’m copying your barca tactic.. I have a sole player up front as a trequartista.. does that player have to be striker or can they be an amc that can play trequartista.. fyi I@m playing classic mode so retraining isn’t possible.. thank you

Has to be a striker, preferably one that can play AMC as well.

yeah, I tried this out last night when the AMC wasnt happy in the striker role I dropped him back into midfield and left no-one up front (well if its good enough for Spain I thought).. it wasnt a complete disaster but it left no-one in the box a number of times.. must remember to find the player to fit the tactic!

I think you can train him as a striker, should work.

He grows so much between the two screenshots that even his name grows!