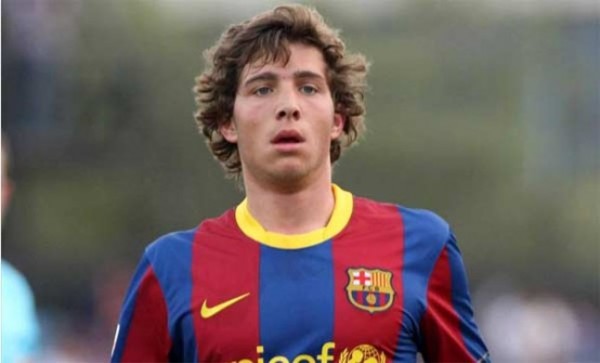 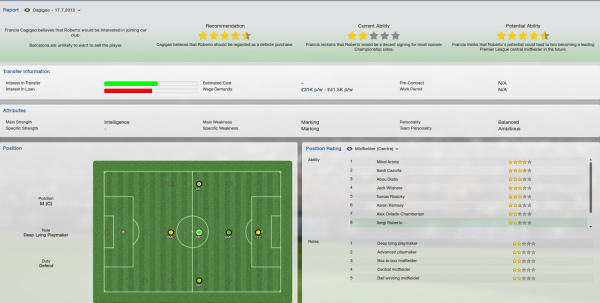 This FM 2013 player profile of Sergi Roberto shows another top class talent from the Barcelona academy, a central midfielder that does become somewhat similar to Xavi, even though not really as good. He is not fully ready for top-flight football at the age of 20 but he’s a late bloomer, I was considering selling him while managing Barcelona but my patience with him was rewarded by very good progress between the age of 21 and 23.

In the test save he becomes a top class playmaker in 2019, great skills on the ball and excellent mental skills, especially creativity, decisions, flair and off the ball. And, as you can see from his career history, he really takes off after leaving Barcelona, joining Valencia for 17 million and having a superb first season there. Unfortunately he doesn’t come cheap at the start of the game, Barcelona want 12.5 million for him, but I bet you’d be able to get him for half of that or less at the end of the first season.

Bleeding hell, they produce decent players Barca don’t they? Him, Thiago, Batra and Delefloe to name a few!

Indeed, decent at least. Thiago is the best of them in my view.

I’m hoping to see some better Tottenham youngsters sitting in the reserves in the next patch, especially with all the hype surrounded a few of them recently.

Have to agree with you on that mate. A bit off topic but I can’t comment on anything on the forum, and everything I commented on via my phone just appears as a white block. Do you have any idea why this is?

Ben I believe it’s the software for apple and forums messing up. On the iPad quotes are all white blocks I have no fix though. Everything besides quotes are normal

sorry but this has happened to me as well. ive been sending people messages on the forum, hopefully i get a reply soon

It would be nice if we could keep comments on topic here. Thanks.

hi johny how does fede vico and alvaro morata evelved ?

Not brilliant in my save but fairly decent, good enough for not very big teams.

ty mate. because fede vico seems to have quality the same goes for jairo. but some palyers just with humamn management that could cross the bridge between being a good player or a big player

Most players do get better with human management, at least in theory that is.

Great development for both, Sergi Roberto is pretty good in FM 2014 as well.

honestly i really wanted to play 2014, but i don`t have yet. In my place, very difficult to find this thing