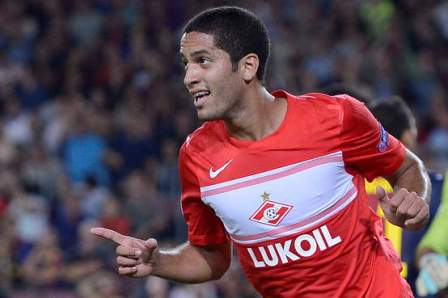 This FM 2013 player profile of Romulo shows a formidable FM 13 defensive midfielder, a top choice whether you choose to set his role to anchor man, deep lying playmaker or defensive midfielder. At the age of 21 he is already good enough to slot into most top flight teams but unfortunately you won’t  be able to get him very cheap as Spartak Moscow had just signed him from Brazil. The Russian club demand 22.5 million for him but I think he’s worth the effort.

There are no real weaknesses in this lad’s profile, he is fit, reasonably strong and fast, good tackler with very good marking and heading plus decent first touch, technique and passing, like most Brazilians. His mental attributes are exceptional, he boasts tremendous anticipation, positioning and determination, plus very good creativity and work rate. His value in 2019 went up to 19.5 million even though he didn’t leave Spartak Moscow, and he also grabbed 57 Brazil caps, a great achievement for any player considering the competition for a national team spot in Brazil. His stats in Russia also look great, bagged a few goals and always had average ratings above 7. If you can get him for less than 20 million, don’t think twice about it!

i want to play him as center midfielder which role would be best for him.

I guess the ball winning midfielder would be suitable. You can also have your scout make a report, they usually outline the most suitable roles in given positions.