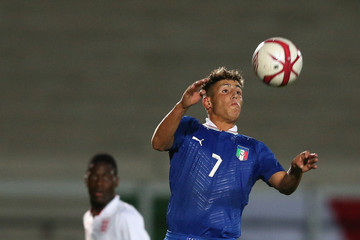 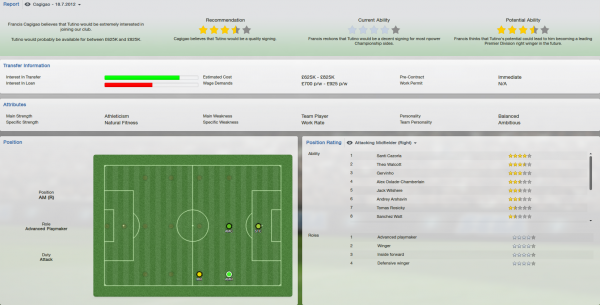 This FM 2013 player profile of Gennaro Tutino shows a real bargain, a kid that you can get for just 650,000 pounds at the age of 15. The initial scout report shows that this kid has potential, and he could well slot into most second-tier sides right away. You can either approach to sign him directly for a fee of 675K but if you negotiate with the club you can get him a bit cheaper.

His future development in my test save was quite remarkable, even though he never left Napoli on a permanent basis. He was loaned out to several clubs in Italy and Spain but performed well and his value bounced to an impressive 9.75 million. He also became a pretty good winger with great pace, remarkable creativity plus decent dribbling, passing and shooting. Moreover, the scout report in 2019 says he still has margin for progress! You can’t go wrong with this kid, profit guaranteed.

Also.. do you know if Marc Muniesa is any good?

Wasn’t too impressive before the patch but I will check again with the new update.

Hi can you do Mauro Icardi? from latest patch and transfer update?

I will check and if he’s good enough he will have a profile.

Could you also check out Roma’s Alessio Romagnoli?

Thanks for the suggestion, I will have a look.

Hi is there any chance of a James Rodriguez profile? I’ve converted him into a DLF before and his stats for it were top quality

Yes, there is a pretty good chance I reckon.

Depends on how much money you have, I don’t know all the clubs’ transfer budgets by heart. We have a list of all the profiles we have published so far, you can always browse through it when looking for players: http://footballmanagerstory.com/scout/2012/10/football-manager-2013-ultimate-best-player-list/