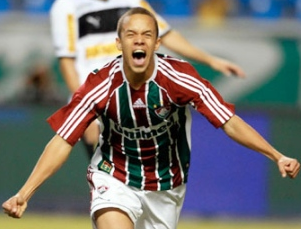 This FM 2013 Player Profile of Marcos Junior may not be to the standard of your Ademilson’s and Fierro’s, but he’s a great poacher all the same. For £8 million you get a striker who can reach 17 dribbling, 16 finishing, 17 off the ball and 16 in all the key physical attributes for a poacher. All these aren’t even showing Marcos at his best, so its safe to say he is a deadly force in front of goal.

The screenshots above are from CPU management, seeing Junior score 117 goals from 234 games, yes this is in Brazil but its still a reasonable record. And when a player always hits high values, you can be sure he’s an asset to be acquired.

How Tello, Cuenca, Juanmi turn out

Pretty good, they should do reasonably well with human management but we have no screenshots worth a profile. Florenzi will probably get a profile at some point soon though.

Would you recommend Ademilson or Marcos Junior? To be honest, I am tired of buying ademilson in every save of mine.
This could be a much needed change!

I would generally recommend Ademilson but based on what you’ve said I’d give Junior a go.

Last time I checked heading wasn’t an important attribute for poachers and I certainly haven’t suffered from my other poachers lacking in that department.

Im betting he woulda got better if he’d left fluminense and played at a better standard.

You’d have thought so.

Not from me personally because I have no screenshots worthy of a profile yet, but maybe someone else will.

I’ve had this in a couple of saves & he’s been quality he’s a cheap Neymar & scores goals for fun if you use him right.

He cartainly looks the part, good to hear some feedback on him as I reckon few would have tried Marcos over other better known wonderkids.

He’s ok but I hate players with injury proneness, they always seem to be doing fine and then get injured right before a big game.

Why do you think he’s injury prone, that isn’t an attribute that he has a high value in?