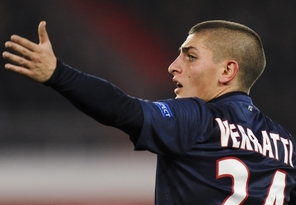 This FM 2013 Player Profile of Marco Verratti shows one of the prized talents this edition has to offer. Verratti is versatile, he can pass, dribble and turn the defender. Marco enjoys such great creativity and flair that even the best would struggle to read his game. This kid develops into the true finished article and the screenshots above might not even do him full justice.

Positives aside, I’m afraid you will struggle to sign this guy, at least early on. Yes PSG will accept £10 million (in my test save at least) but Verratti will refuse a move during the first year. My recommendation is to attempt for a loan deal and then sign him when thats up, should he want the move by then of course. Still, we rate players on their talent and value for money at the start of the game, not their availability, so he gets top marks from me.

Verratti as support and you need a new player on the other side assuming he’s going to be defensive.

Who do you suggest?

There’s loads of players to look through through in the wonder kids list and they all have star ratings. I don’t know your team, budget, time in game so just search through the lists we put together or try a filtered search in game.

I’m thinkig Crisetig. Could he play that support role?

He could, but would be better as defend, just look at the attributes remembering that a support role requires as much going forward as it does in defence.

great player, my favorite midfielder along with Thiago in Fm 2013, well deserved 10/10.

Have them both tearing up midfield in my barca save.

Well that is one hell of a pairing.

I looking for a CM support that can also play DLP support I think about Andrea Poli and Pajero or Barrada which one is better? Or suggestion for others

Maybe Poli, but just look through the wonderkids list, thats what its there for and all the players are rated.

I would just be reeling off players from the list I’ve told you to look through TBH and it will vary on who is still available, your budget, team loads of stuff but the likes of Ayew, Cirigliano, Verratti and Romulo.

On a budget, Ruben ytergaard Jenssen. To break the bank, Aaron Ramsey, if you need English that is

I’ve just got him on loan in my second season so will see how he does and then try and tie up a permanent deal.

Certainly worth the investment.

Is Verratti a late bloomer? In my game he is 24 years old with just 17 passing, 16 technique and 16 first touch. Not as good as the future screen shot shown above.

No I don’t think so, depends on how much football he’s played and if its AI development then it could be very unpredictable.

I just bought him for 10.25m in October 2012 for Juventus, buzzing to see how he develops!

I doubt you’ll be disappointed that’s for sure.

Managed to get this guy for Southampton in 2nd season, can’t wait to see how he turns out. Also kudos to you guys for this site, it’s amazing. For me and my mates this is the ‘go to’ site for all things FM.

Thanks Habib, glad the site has helped.

I’d say so, maybe someone who can move a little more freely though.

I’m really torn between this guy and verre to play a DLP support role, and/or a CM support role. in both formations I use a three man center midfield with one supporting player, one more defensive/ball winning midfielder and an advanced playmaker. who would you chose? is there anyone else you would recommend?

Those two are probably two of the best, I’d go for Verratti but only due to bias from previous versions of the game.

Not bad at all.

I guess it depends on what other positions and players you have. Use Thiago if you couldn’t play him as advanced playmaker and already have a defensive minded midfielder. If not then maybe go for Gundogan or Verratti.