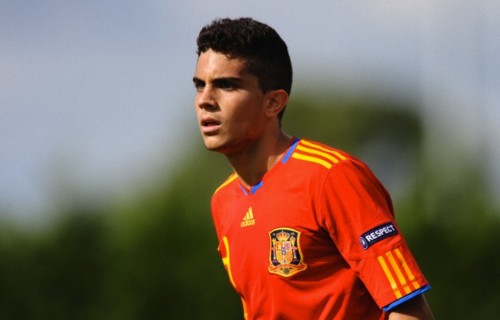 This FM 2013 player profile of Marc Bartra shows another wonderkid from Barcelona’s renowned football academy. At the age of 21 Bartra is already good enough to fit in any top-flight team in Europe. The best thing about him is that his performances are consistent and that you can’t really find a flaw in his profile, he’s fairly strong, fairly quick and very intelligent. In my test save he was a backup for the likes of Pique and Puyol at Barcelona but still managed to make some progress, as his future profile from 2019 shows.

Then he moved to Sevilla for a pretty good fee and had a great couple of seasons there. Barcelona are willing to let him go for 12 million at the start of the game and I think that would be a good investment as this lad could serve you very well for around 10 seasons or even more. He can also provide some cover as a right back but his main role is as a central defender. Last but not least, he has very good technique, first touch and passing for a defender, I guess that’s the Barca education, so he would be an ideal signing for teams that play possession football.

I wonder if training was focused on crossing if it would develop much, if so he would be a great wingback (and also double as solid CB cover). I love wingbacks.

I guess you can do that, he’s good on the ball and fairly quick so maybe he can be a successful wingback.

Ball Playing Defender. He progresses very well with games, and has been great for me at Getafe so far.

In one of my saves at Barcelona I play with both Bartra and Piqué as CB. Bartras development has been immense. To top thing of, I let Puyol tutor him, wich made his attributes increase a lot! I’m near the end of the FIRST season, and he is already way better then the profile above from 2019. Training these young stars yourself makes an insane difference.

Good young defender, signed him for my AS Monaco save, Took a bit of time to get adjusted but now he has turned into beast. The plus point is that this guy can pass well from back.