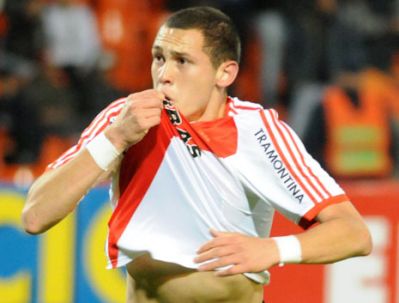 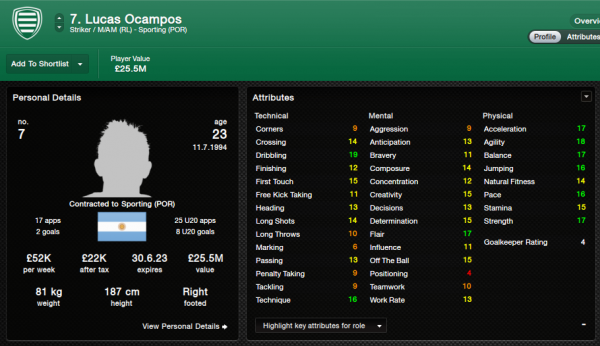 Here is a young Argentinean who has just took the leap over the pond to Europe. Due to that he may not be so interested in joining many clubs, but he will in a couple of years. And boy is he worth it. He is predominately a winger, who can play on either side, and he can tear full backs to shreds with is amazing physical attributes and also has some pretty awesome technical and mental ones too. In my save he helped Monaco win back promotion and then went on to dominate French football. I am a bit surprised none of the other big European teams took a gamble on him, although I’m not sure exactly how good Sporting are in my game. Aged just 23 in 2018, he already has 18 caps for his country and still has plenty of room to improve. A quality player.

could you do mario fernandes? plays for CSKA

I will have a look at him for you mate!!

He does have similar attributes, and some could be even better under human management!

i agree with you luka and ifhe looks like him managed by cpu imagine how the kid turns like under human management and tutored by Cristiano Ronaldo. and like jonathan said is only 23 years old he has a lot of space to grow.

but for me, i put him as a if or a amr developing just a litlle his corners, pass, finishing and penalty taking and it´s ready for destroy.

Jonathan, S.c.p Normaly in my FM stands on 2/3 palce in the league and some times they win it. Because in reality and even in Fm scp has a great team but they lack confidence in them selfs so they hit rock bottom and very hard, but in fm they don´t have the crap that they have in real life, so by seeing the amount of money they put to sign ocampos i must say that they might have won the league a couple of timesl.

Thanks for the info mate, they must be doing pretty well in the Champions League as well to be paying that much on one player!!

Yeah I can imagine him to ask for high wages, he will be worth it when he gets older though!

two questions 1- Is he best played as a if or a proacher ? Im asking this because of the seasons in monaco and scp.
In monaco he scored a 77 goals in 129 games what is amazing .
But in scp he didnt score that much , thats suposing that he was used as a winger.

2- do you think he will sign for liverpool in the first season ?

I think his attributes are more suited to a winger, he seems to score less at scp, but he did get more assists, which is what wingers are primarily for.

I think he will play well in both positions and depends what your team needs!

He had no interest in joining Arsenal in my test save when I tried so you might be struggling to buy him in the first season. But the second season you will have more of a chance!

ty mate =) im searching for if for my liverpool beacuse i have llorente and yasil in front and puted suarez on the left as a if and for amr i have vadillo and sterling. and i need a substitute for suarez. but i will decide between ocampos chamberlain and fede vico( this last seems to have great quality)to see who should i sign. and fede vico is the most cheeper Cordoba asks around 4 Million for him

I have been using him as a trequartista partnered with either Bakkali or Fierro. Two months into my first season with Monaco and it seems to be working well.