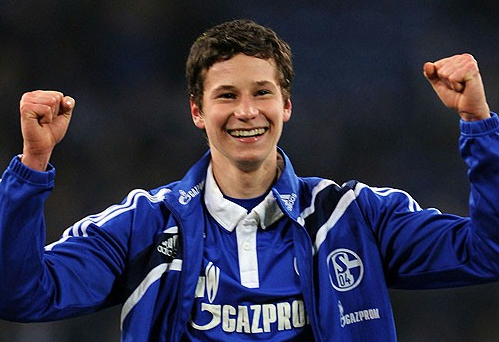 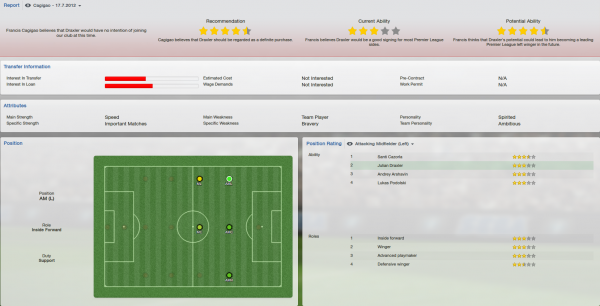 This FM 2013 player profile of Julian Draxler shows a brilliant wonderkid, a lad that can slot right into most top European teams at the age of just 18. The big advantage of signing him early on is that, considering his young age, you will be able to shape his development according to your own will and needs but the bad news is that he doesn’t want to move at the start of the game, saying that he wants to continue his development at Shalke. Moreover, the club want a hefty 25 million for his transfer.

But he seems worth the effort. In my test save he remained at Schalke until 2019 but his value almost doubled and he made excellent progress overall. His skills could make him an ideal advanced playmaker but he should do an excellent job as a winger or as an inside forward as well. He’s a top quality FM 13 wonderkid but one that might be pretty expensive to acquire.

When’s the earliest people have been able to pry him away from Schalke? I’m in January 2016 and still no luck, he says he wants to keep playing at Schalke.

You might want to try to unsettle him, declare your interest, admiration and so on. That might lure him away.

Can do the profile of Neal Maupay, Andre Schurrle.

Maupay isn’t available in my save, Schurrle is coming up next week.

how about Maximilian Mayer, another wonderkid from Schalke? Can be offered contract at the start of the game with just 2,8M compensation. He’s just 16 years old and my scout rate give him 4,5 star potential!!

I’ll check him out as soon as possible.

Will do a report on Maximilian Meyer, he’s good.

who is better lamela or draxler or yarmalenko

Anyone know what this cannon is like on the right?

Should do a good job on the flank if you work on his speed a little bit.