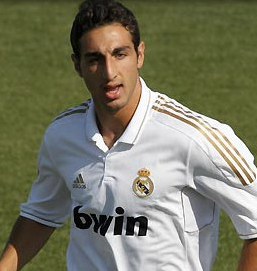 This FM 2013 Player Profile of Jose Rodriguez shows a real talent. To look at the future development Rodriguez grows well and makes great progress in passing, technique and general mental stats. He’s not exactly overwhelming, however, I’d like to draw your attention to his career history.

Jose missed too many games during 2014/15, 2015/16 and 2017/18. That’s three years of poor development which if done differently could have seen this kid truly blossom. I think his promise warrants the £8 million price tag.

Could do a David Luiz role of getting the ball of Long passes towardthe strikers and tackling the strikers. Remind me of the shuttler role that Claudio Marchisio plays in. Great box to box midfielder.

Yeah I do think he’d perform best sat just in front of the defence to receive the short simple pass then spray the ball around and set the tempo.

While he’s not got near that level in my test save he certainly seems to have the potential to come close with the right management.

Manage Real Madrid and use him as Xabi’s back-up and planned to make him starters in 2-3 years ahead.

Used to tutor him with Xabi and benefited well.
His mental attributes grow significantly.