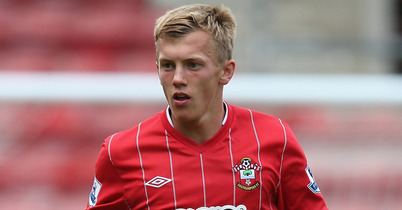 This FM 2013 player profile of James Ward-Prowse shows another promising English teenager, a midfielder that can grow into a skilful midfield maestro provided proper guidance. The lad is not ready for the Premier League at the age of 17, so the best thing you can do is send him on loan. Actually, the future screen shots were provided by Alex, who managed Southampton in FM 13, and you can see that he sent him on loan in two consecutive seasons before breaking him into the first squad.

Alex obviously worked on some aspects via individual training, getting his passing and technique to a perfect 20, plus developing his creativity to almost perfect. As you can see from his future profile he turned into a great playmaker and also earned 10 England caps, not too shabby for a 22-year old. The only downside to this player is the initial asking price, Southampton want 12.5 million for him at the start of the game and that price is a bit steep in my view considering that you would still have lots of work to do in order to develop him.

This guy must be the the Merlin of Football Manager. Only 90 games under his belt and that much development. It’t almost unbelievable.

Reckon this slag could slot into cm support role?

I guess he should do well in that position.